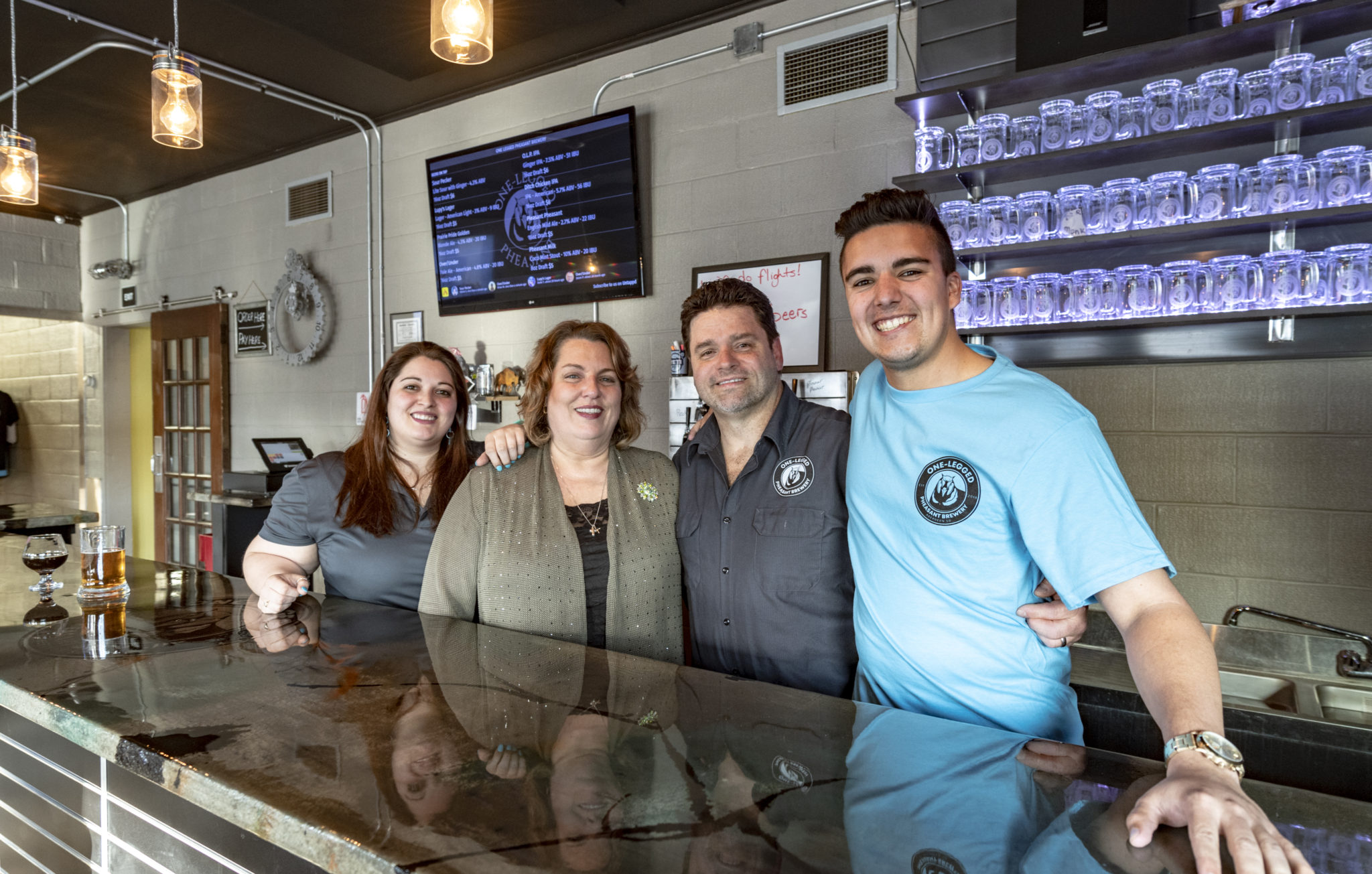 Pull up a stool to Dave Welling’s Brewpub

Not so long ago, you wouldn’t dare have walked into the corner of 8th Avenue and South Main looking for a drink. The paints there may have had exotic names, but you’ll do better with the place’s new fowl blends, like Ring Neck Red and Ditch Chicken. They’ll come to you under the watchful gaze of a bird that means business—a One-Legged Pheasant. But it’s OLP’s barkeep and brewmaster, Dave Welling, who rules the roost.

In a way it’s surprising he owns Aberdeen’s first brewpub. When his dad gave him his first taste of beer when he was growing up in Michigan, like any nine-year-old, “I thought it was the worst thing ever!” (Of course, it was a Miller Lite—and if his dad was like mine, it was the bottom of the bottle.) His appreciation, or at least his appetite, for beer increased as he got older, but as he says, “Nobody cares about taste when you’re young!”

But Dave approached beer a little differently. “I was always the guy looking for something else,” he remembers. “I put salt in my beer. I was the one who tried Michelob Dark, Molson X, Mickey’s” [author’s note: Mickey’s? Really?]. Eventually, he found craft beers about 15 years ago. “My first was probably Blue Moon, with that orange slice.” Then he visited the New Holland brewery in Michigan. “I liked their Imperial Hatter imperial IPA and Dragon’s Milk imperial milk stout. They were my step to the dark side,” he grins. “Once you light the fire, you never go back to ordinary beers. You think, ‘This is what real beer tastes like.’” Also, whether he saw it then or not, a seed was planted, and he started “dabbling” in home brewing.

Meanwhile, he had been working as a service technician for a refrigeration company and had also taken a few runs at owning small businesses: a heavy equipment service that installed air conditioning units and a motorcycle TV show called “Rider Revolution” that appeared on local Michigan TV. A little bit of the showman in him too, he also spent ten years as a professional drummer.

In 2015, he found himself in Aberdeen when his wife Sandra became dean of nursing at Presentation College. He loved the community, but soon “I realized there were no breweries here.” His dabbling in brewing picked up, and he moved quickly to the all grain process (where you start at the very beginning of the process with raw ingredients), because “That’s what the big boys do.” He kept studying and learning as he brewed. He also credits the Aberdeen Brewers and Vintners group—“There’s a lot of information there.”

He “was brewing hard for a couple years,” before the idea of becoming one of the big boys started to form. The lack of a brewpub here “turned on a lightbulb” for Dave, and he may have realized that it was “always in the back of my mind to do it here.” He had visited brewpubs in Michigan, Denver, Omaha, Minneapolis, and other places. “I saw all the cool stuff,” he says. Then when he thought about opening a business, he started to study how they set up things in the back.

A lot happened behind the scenes for a while; in particular, Dave and Sandra committed themselves to launching a new business in their adopted community. Then on his birthday in October 2017, about a year after the couple began talking seriously about it, he announced his plan to open a brewpub. “Somebody’s gotta do it,” he decided.

By that time, he’d also taken out a lease on the building, which was most recently the Diamond Vogel paint store and had once been a print shop. It would take some work to get new liquids flowing there. Over the course of building the business, Dave credits his landlord (and creditor) Ron Wagner with a lot of flexibility and maybe some tough love—“I couldn’t have done it without him.”

Now the task was to convert the old paint store into a brewpub. The term suggests a combination of two functions—the brewery and the pub (although through centuries of beer history, pubs brewed and sold their own). The pub part was relatively easy—purchasing tables and chairs, setting up the bar, installing lighting and acoustics, painting the walls. Dave always had a kind of industrial motif in mind, hence the silver and black throughout the bar.

The brew part in the big space behind the pub took a little more work. By March 2018, Dave had quit his two jobs to focus full time on his goal of opening that spring. Unfortunately, his brewing equipment vendors had other priorities: bigger customers. Dave says, “There were two hard things about the process: financing, especially holding onto the building while there was no revenue, and equipment. My suppliers focused on their other, bigger clients over a new, small business.” Then, he adds, when the brewing equipment finally came months later than promised, “I needed to do a lot of jerry-rigging because it wasn’t as turnkey as the company claimed.” (His refrigeration background paid off when he installed it all himself.)

The main ingredient in beer is water, and it surprises many customers that Dave uses Aberdeen water in his beer—but those people keep coming back for more. He admits, “I couldn’t brew with Aberdeen water.” So he installed an industrial water softener setup—a carbon filter gets rid of chlorine, then reverse osmosis reduces the mineral content down to 11 parts per billion. “It pretty much cleans it up—gets rid of all the Aberdeen taste.”

This nearly raw H2O and other good stuff gets cooked, conditioned, carbonated, and cooled in all that equipment that Dave assembled. And that equipment can hold a lot of beer. Six fermenting tanks and two bright tanks (where the beer is conditioned and carbonated) can hold some 870 gallons, almost 7,000 16 ounce glasses of beer. So far, Dave is using about half the capacity of the brewery. He can brew as many as six types of beer at a time, and he usually has three or four going. He has put about 15 different beers on tap so far and always has nine available, with four regulars—a couple ales, a lager, and an IPA.

Finally, in late September 2018, about a year after he announced his plans and about four months after he was hoping to, the One-Legged Pheasant opened to rave reviews. Check Facebook and Untapped, the mobile app for craft beer drinkers, for satisfied customer comments. It was a hit. The One-Legged Pheasant hops! (That’s a hint.)

Dave loves his job. “There’s such a sense of pride in owning a business,” he says. “It’s something you dream of. It’s one of my greatest feelings of fulfillment and the hardest thing I’ve ever done.” And, he adds, “But it all rises and falls on you—there are stresses of owning a business. But one way or another, I was always going to have a business of my own.”

OLP is a unique spot in Aberdeen, selling its own beer and only its own beer. And you can drink it in your own numbered OLP glass through the Mug Club. You can buy your own mug, keep it at the bar, and get $1 off every beer you drink at OLP all year long. (Don’t tell the publisher I’m charging one to my magazine expense account.) As of this writing, there are 130 Mug Club members. The bar has also begun offering bingo nights, and other special events are in the works. Dave loves to give tours of the brewery area—which also hosts special beer events.

So why that name? “I always answer that question with a question,” Dave explains. “’What does a one-legged pheasant do?’ He hops! And there are hops in beer.” Originally that was going to be just the name of one beer, but through conversations with friends, it grew to become the name of the place. All his beers have related names connected to pheasants—e.g., Pleasant Pheasant, Big Gauge, and Over/Under (maybe not always the connections a pheasant would think of). The bar has a serious-looking mascot named “Hoppy,” who has a family that will be showing up over time.

What’s ahead for OLP? Dave wasn’t planning to distribute his beer outside his own brewpub for at least a year, but Pounders is already carrying his beers. “There was interest in distribution from customers as soon as we opened,” he explains. The future might also include adding more taps, which would require increasing the size of the cooler for the kegs that feed them. He also thinks of possibly buying the building, adding food, expanding distribution, canning his beer, and maybe even moving the brewpub to a new space and expanding production in the current location.

But for now, he wants to “learn more about the business and make more profit.” And maybe have a beer. // –Patrick Gallagher