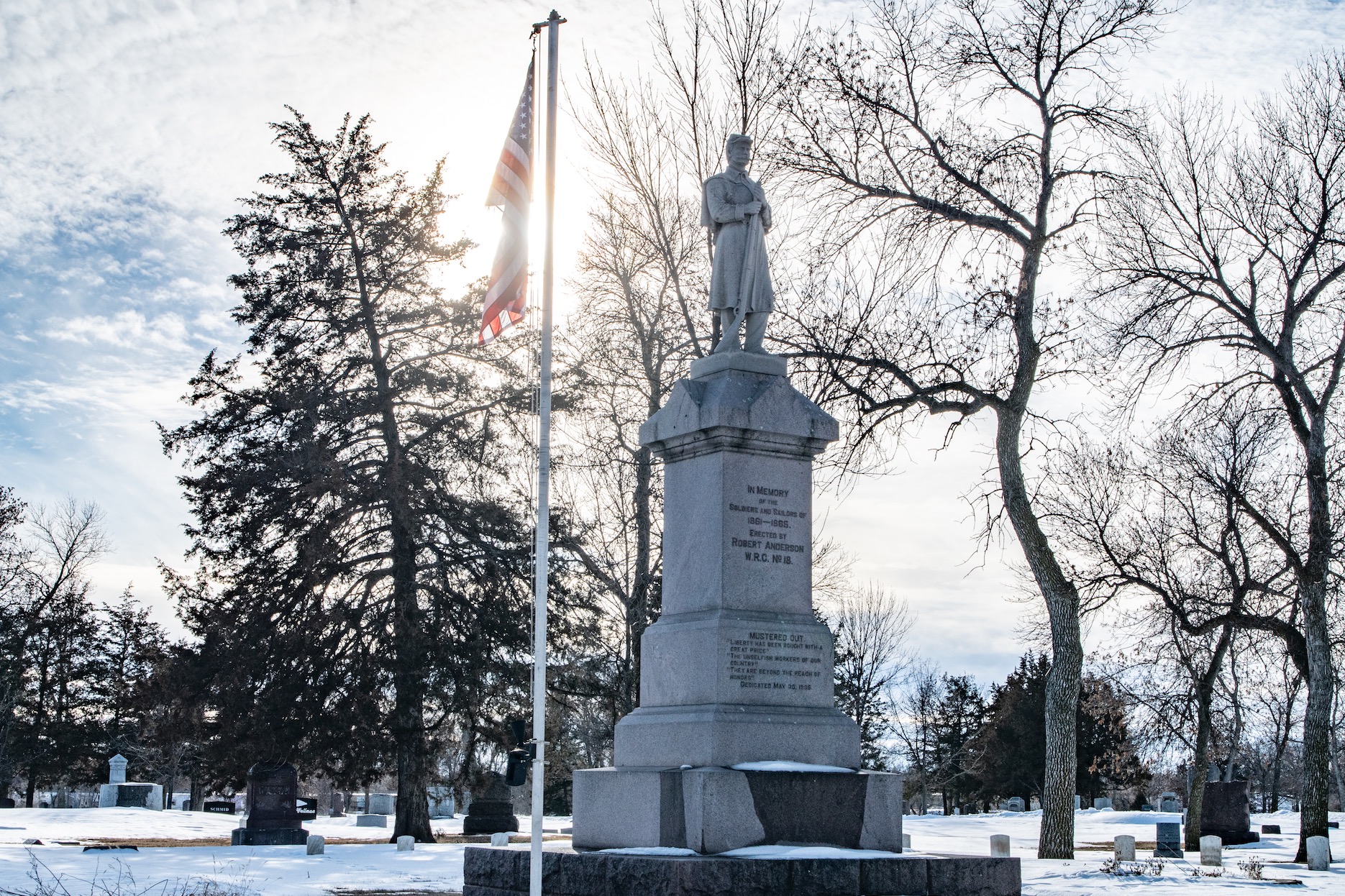 The Cemeteries and Tombstones of Aberdeen

When I was a kid, my wacky red-headed aunt visited from New England and showed off her latest hobby: gravestone rubbing. You held tracing paper against a tombstone and rubbed a pencil or crayon on the paper until the engravings appeared. I carried paper and crayon with me when we visited family graves in Redfield and Ashton. My hobby lasted about as long as her visit, but an interest in tombstones and cemeteries stayed—or more likely, returned (probably around age 50). I found that the tombstones and cemeteries in Aberdeen have something to say.

I visited three cemeteries in town and the men who maintain them: Ryan Smith at Riverside, Jeff Swank at Sacred Heart, and Paul Anderson at St. Mary’s. (Sunset Gardens is a much newer cemetery without the century-old tombstones I was looking for.) Riverside opened in 1886, both a sign of a growing city and an alternative to burials in nearby farm fields. Sacred Heart Cemetery opened in 1895, and St. Mary’s in 1908. Among the three cemeteries, there have been about 19,000 to 20,000 burials.

It may seem odd to visit a cemetery other than to pay your respects, but I wanted to see how other people have remembered their loved ones. The cemeteries aren’t museums, but there’s history and culture there. Riverside makes it easy with a brochure for a self-guided tour. I think all the caretakers agree with Ryan Smith’s observation: “I learn something new every time I go around the cemetery.”

A public cemetery, Riverside is operated by the City, while Sacred Heart and St. Mary’s are Catholic. In addition to parishioners, Sacred Heart reserved space for the Presentation Sisters, most of whose burials are in the north central area. There’s a large crucifix at the west end and a small grotto and altar at the east. A second group of Sisters’ graves is about 100 yards south. In both sections, the small, simple stones, in their rows and columns and diagonals, are as orderly as a military cemetery.

Not surprisingly, all three cemeteries have many veterans’ graves. For decades, military markers have stayed generally the same, a narrow white stone, five feet long with about half showing above ground. It is engraved with the deceased’s name and brief service history. Flat stones have become more common and, Paul Anderson says, the white stones are no longer available except for national military cemeteries. Now, veterans can get flat markers or brass plates that can be attached to stones.

The circle in the old part of Riverside south of Melgaard Road is the Civil War area containing several Union veterans’ graves dating back to the late nineteenth century—marked with the white stones. A large monument with a Union soldier on top overlooks the circle. Ryan says, “I’ve been told that the soldier should face south as a sign of unification, but ours faces north.” He shrugs, “Pierre has one too, and it faces west.” Confederate veteran C. Boyd Barrett, who came to Aberdeen in 1884, is buried elsewhere in the cemetery.

Tombstones may never have been as varied and individualistic as they are today given the technology and willingness to engrave almost anything, but those century-old stones have a charming kind of primitive originality. Jeff Swank notes, “The early stones are thicker and often made by hand. Newer ones are made with machines, which allows them to be thinner.” He also cautions, “Some old stones weren’t engraved deeply enough and the lettering is fading away.” Several markers in all three cemeteries are unreadable today. In addition, many old monuments are tilting, sinking into the ground, or breaking.

“You can kind of tell the haves from the have nots by looking at the stones,” Jeff says, “but some of the simple stones stand up just as well.” Paul Anderson observes a difference between the Catholic cemeteries, “St. Mary’s doesn’t have the large stones that Sacred Heart has. The German-Russians here didn’t have anything when they came here.” Some older stones at St. Mary’s are engraved in German. The largest tombstones are at Riverside. The Lamont obelisk is 20 feet tall, and the Easton monument if massive—about six feet high by six feet wide by two feet deep. The Kyle and Narregang stones are nearly identical (except for color) five-foot tall pedestals holding large spheres. There are many other grand markers, particularly near the Civil War circle.

At the other extreme, each cemetery has graves with very simple markers—or none at all. There are several homemade crosses fashioned from wood iron pipes, many of which mark a grave but do not identify the deceased. At Sacred Heart, Jeff showed me one unmarked pipe cross that gets repainted every few years, but he doesn’t know by whom. Paul says the same thing happens to a concrete cross at St. Mary’s. At Riverside, one grave is marked by a metal sign like a license plate attached to a fence post. This last is in the indigent section of the cemetery, where burials are paid for by the County. Most graves there have very small ground level markers, often without names, and some graves are unmarked. Sacred Heart and St. Mary’s also have unmarked graves. Most are still documented in the cemetery records, but Paul Anderson reports that more than once he’s begun to dig a new grave and found an unmarked, unrecorded burial. An unremembered grave is a stark reminder to count your blessings and look out for your neighbor.

In between these extremes are a range of interesting memorials in an array of shapes and sizes. In the early 1900s, white obelisks about five feet tall and maybe six inches by six inches—like miniature Washington Monuments—were common. These often have a cross attached to the top, many of which have disappeared over time, and were probably more affordable than the also widespread rectangular stones that are about four feet high, three feet wide, and a foot thick. Several markers are cast iron crosses of various designs that look a little like oversized lawn ornaments with a name plate attached. A few markers appear to be almost homemade accumulations of various stones adhered together into the standard arching shape. Riverside has a few stones carved to look like tree trunks. In addition to crosses engraved or attached to a marker, many stones feature flowers, palms, bibles, vases, columns, cubes and tubes, vases, birds, and lambs.

The lambs are typically on tombstones for children and infants. Poignantly, all three cemeteries have special areas, sometimes called “babylands,” where infants were buried, sometimes secretly and hurriedly. There’s less use of these areas now, particularly because there are simply fewer infant deaths and those babies are usually buried in family plots. Paul Anderson says he has to be careful if he’s doing a rare burial in the babyland and hope that he doesn’t dig into an unmarked grave.

Riverside has graves of some locally famous and infamous people. One of the more intriguing memorials isn’t there anymore—it was blown up. The Brown brothers owned a bank on Main Street, and when the bank failed before the Great Depression, someone bombed the family’s cemetery monument. All that’s left now is its flat pedestal. Emil Victor is the only person ever to be hanged in Brown County. His very simple flat grave marker is pretty nondescript—except for the engraving of a noose. The Matthews Mausoleum, which holds only Wilbur Matthews, was broken into years ago. The perpetrators were caught and imprisoned.

St. Mary’s has a sort of mausoleum of its own in the center of the cemetery. After the death of one of the parish’s first pastors, Father Joseph Schell, the parish raised money to construct a chapel in his memory, which can seat about 40 people and is the site of a popular annual Memorial Day service. Father Schell and his successor are both buried under the chapel, and there is space for six more pastors to be buried there as well.

Cemeteries are made for the dead, of course—and the living. That’s who’s responsible for the markers of all kinds—not just for supplying them but tending to them too, such as repainting in secret. Not all care is so mysterious, of course. Families visit graves on Memorial Day, birthdays and anniversaries, and some even water and mow the grass at their loved ones’ plots. Love doesn’t end.

All three cemeteries mentioned have space for thousands of new burials—at least 10,000 in total. That estimate increases as more and more cremated remains are interred. Multiple “cremains” can be buried in the space of a traditional grave. It’s an efficient use of space, but as Paul Anderson notes while looking at the tombstones across the cemetery, “But then we won’t see these anymore.”

When I looked around the cemetery too, I was struck by how right its randomness seemed. The diverse array of markers, the imprecise rows and columns, the leaning and sinking as well as new, sparkling tombstones—the diversity of names—the grand monuments, the modest markers, and the unknowns. The cemetery was a tableaux of grandeur and poverty, remembered and forgotten, mutuality and difference, order and messiness—all in one place. Very democratic. Very American. // –Patrick Gallagher