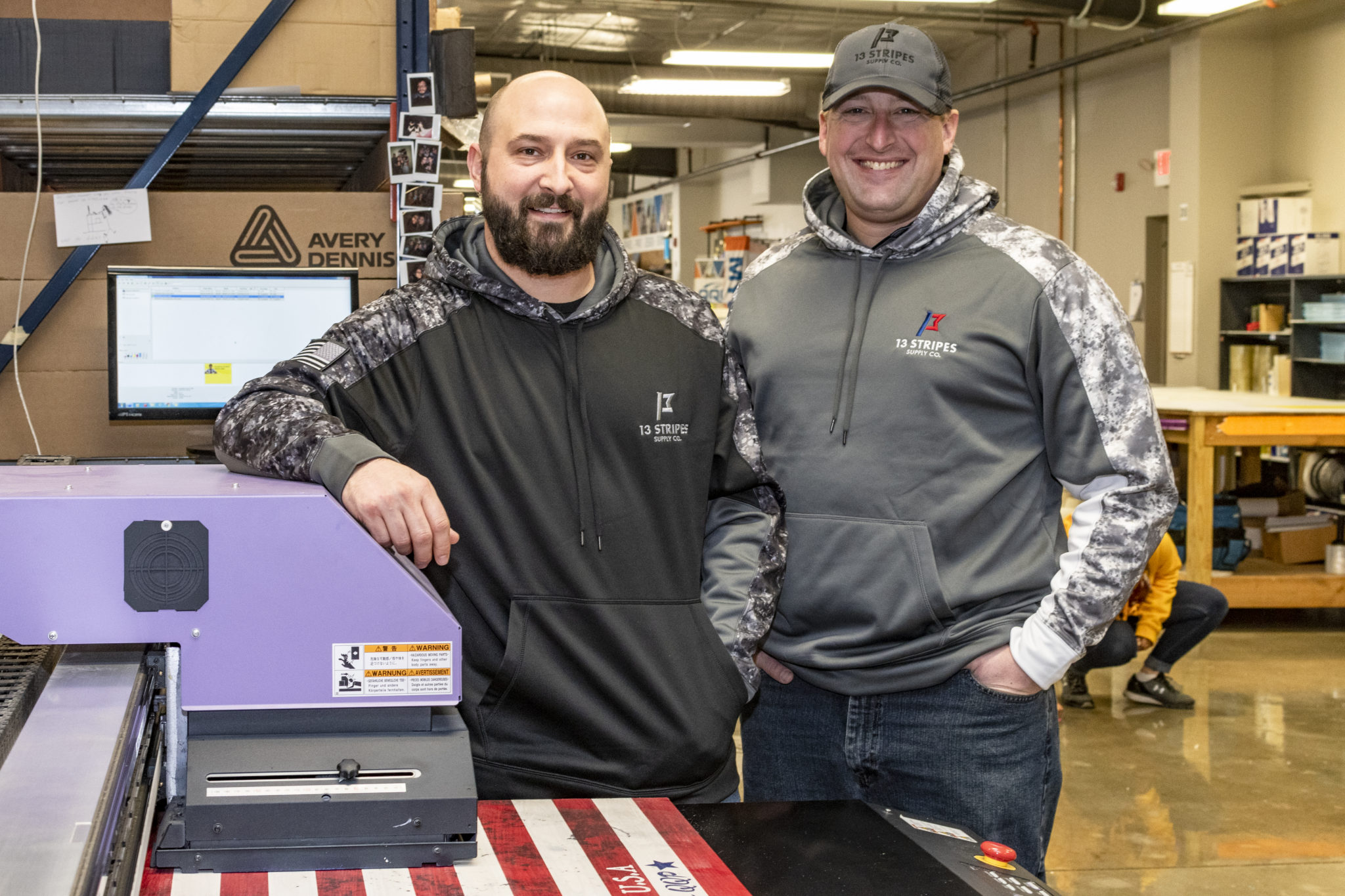 Justin Feickert and Rich Achen are changing the conversation around patriotism with their new venture, 13 Stripes Supply Company.

With a friendship that goes back 20 years and counting, you get the feeling that Justin Feickert and Rich Achen have a lot of stories to share. Maybe one of the most interesting is how the two became battle buddies, or soldiers who look out for each other in and out of combat. As “young pups” in 1998 they hadn’t yet met, but both enlisted in the U.S. National Guard just days apart and were assigned to the same unit, the 2nd of the 147th Field Artillery from Aberdeen. They quickly became friends on their first guard drill. Rich jokes the two got along right away because Justin “was as cocky as I was, so we became pretty good friends.” In all seriousness, he continues, “I’m very fortunate to have him in my life because I consider him my brother.” Fast forward a few years, and Justin was close to getting out of the military when the attacks on 9/11 happened. He was put on a stop loss, and later he and Rich served with their unit in Iraq for 14 months during Operation Iraqi Freedom II, providing security on supply missions and during elections, among other duties.

After they came home from Iraq, Justin was honorably discharged, and Rich still serves today. The two have remained close friends while growing their families and careers. As Justin says, “We’re battle buddies, and that’s pretty much a lifetime thing.” Justin is the CEO of Quality Quick Print and the father of four. Rich owns Frederick Seed and has a family of five children. With busy schedules, staying in each other’s lives can be a challenge, but the start up they founded together in 2017 is providing a way for them to keep in contact more and more. That start up is 13 Stripes Supply Company. The business, which is more like a nonprofit, is named for the American flag, military, and the ways they use their profits to give back to causes important to them. 13 Stripes creates products that make it easy for anyone to show their patriotism. Wooden and metal indoor/outdoor signs are their main sellers, but they also make things like mugs, greeting cards, and apparel. With every purchase, 13 percent of the sale goes toward a nonprofit or charity that benefits military, veteran, law enforcement, or fire and rescue personnel. Justin explains, “We don’t pay ourselves, we don’t make salaries off this, we’re doing it because we love giving that 13 percent back. It’s awesome because we first get to give our time in putting together the product, then we get to see people enjoying it and having something patriotic on display, and along with all of that we get to give something to those military and public service people who deserve it so much.” Since getting off the ground and running, they’ve been able to donate over $1000 to groups such as the Navy Seal Foundation, the family member’s fund for Aberdeen’s 452nd Reserve, and a veteran memorial fishing tournament that raises money for veteran suicide awareness. When customers check out in the 13 Stripes online store, they can choose which cause they want their purchase to go toward.

Besides giving back, Justin and Rich want 13 Stripes to stand out in another important way. The company didn’t just come to be because of their friendship, but because they wanted to create positive conversations around patriotism. They strongly believe that being patriotic is a good thing, and instead of just talking about it, they wanted to do something that gave people the opportunity to show their pride in their country. Recent events like kneeling at the national anthem can cause parties on both sides of the debate to fall into a negative mindset. Justin and Rich’s business stands apart from many patriotic gear companies out there because they only create designs with positive messages. They don’t print things that take a political side or that mock another’s view. Instead, they opt for personal pieces that can be customized to include options like the name of the service person, or the Oath of Enlistment sworn by everyone who joins the military. Justin says, “We didn’t want 13 Stripes to be controversial or negative because that’s not what we want our kids to see. We want them to see us being respectful, even when we don’t agree with someone on an issue. Our products make it possible for everyone, no matter what their lifestyle or views, to show their patriotism.”

13 Stripes has a big mission and it all starts local. They want to get the American flag hanging on every wall in the U.S. while giving back that 13 percent, but first they want to be known in the Aberdeen area as a reliable place to get gifts for service personnel and patriotic decor. Their product designs are created in Aberdeen and most everything is produced at Quality Quick Print. The sanding, cutting, and edge burning of the wood for their signs are tasks Justin and Rich handle on their own, wanting to be as hands on as possible with the merchandise they send out. When choosing raw materials, they take care in making sure everything is American-made. Since Rich still serves in the National Guard and is a member of the Frederick Area Fire Department, he is the one usually connecting with customers in person. Justin follows through on orders as they come into Quality Quick Print, and his wife, Toni, does the administrative work for 13 Stripes. Most of their sales so far have come from word of mouth.

Even though this new business is just getting started, it is Justin and Rich’s hope that it continues long into the future. They admit it gets hectic at times as they are trying to work 13 Stripes, build their full-time businesses, and keep up with their active families. To manage everything, they set aside time on their calendars that is only for 13 Stripes. As their kids get older, they want to involve them by having them take the lead in things like promoting the products via social media. No matter how large or small 13 Stripes turns out to be, Justin says they will always be a positive option for showing patriotism. “Often times people want to show their thanks or support for veterans and police officers, but they aren’t sure how or what to give them. A personalized sign with their name or branch is different than the usual gift, and just a very meaningful and thoughtful way to say thank you.” // –Jenny Roth