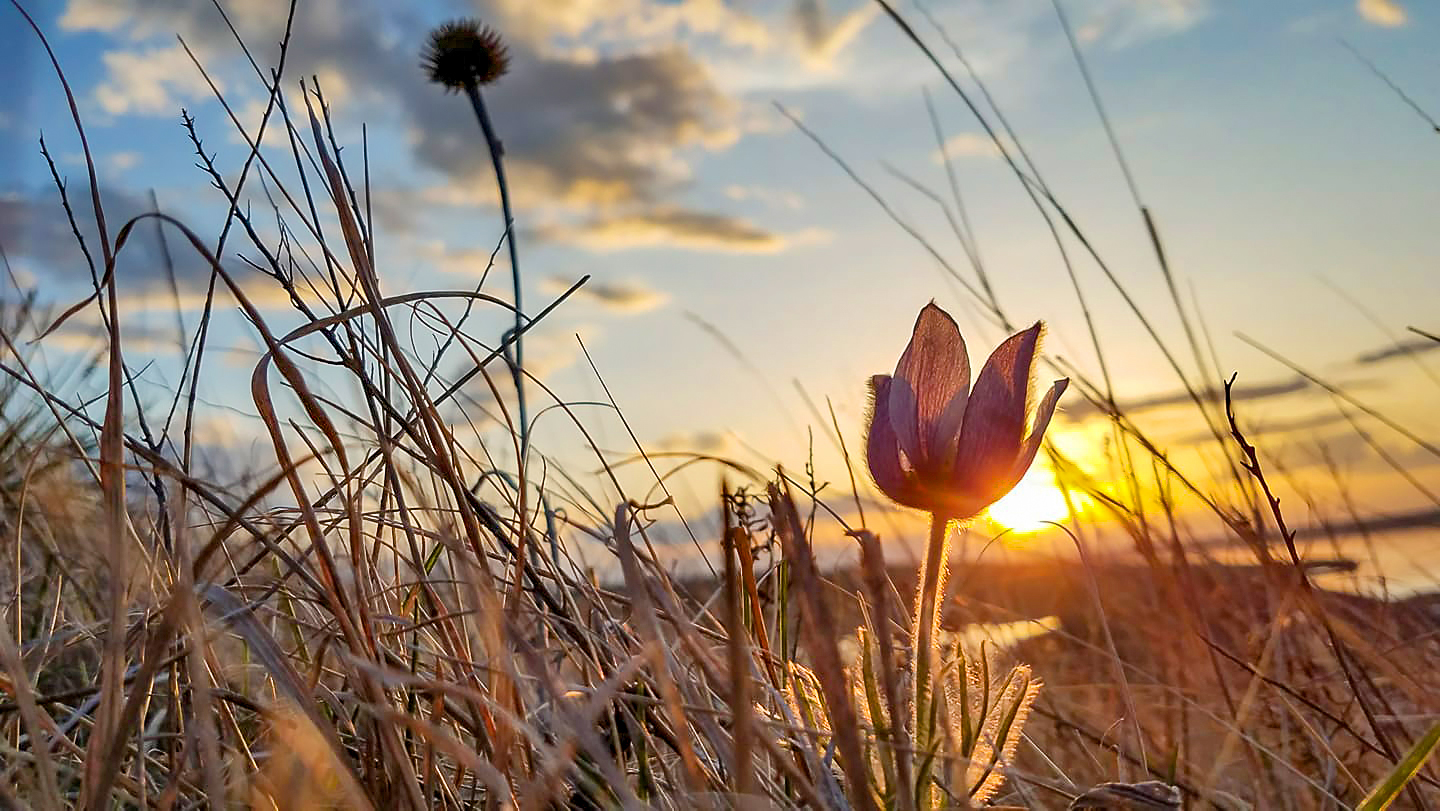 South Dakota’s state flower blooms in Brown County. You just have to know where to look.

In South Dakota we have our winters, and if we’re honest, I think we take a little bit of pride in how we battle the months of cold and come out the other side. Sub-zero temps and freezing rain? Sounds like a typical Tuesday, no big deal. We’re South Dakotans, we’ve got this. We wear sweatshirts when it’s 30 degrees Fahrenheit and catch our fish through the ice. It takes a certain edge to live here, a bit of grit. It’s no wonder then that our state flower is the pasque flower. If you’ve seen it, you know this flower is short with a quiet lavender color and soft, fuzzy leaves. But don’t let its delicate appearance deceive you. The pasque is every bit as bold and persevering as any other South Dakotan. I’ve found it on April days, blooming while snow and hail fall around it, and on late-March afternoons where the thermometer read below freezing just that morning. 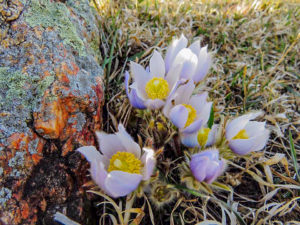 If you’ve never seen a wild pasque flower, there are a few tips for finding them growing in and around Brown County. To start, they only grow on native prairie that hasn’t been farmed in the past, preferring the south-facing side of dry hillsides and hilltops or open wooded areas. Pastures that were grazed late during the prior summer are another good place to search. Since most of the land in Brown County is flat, farmed ground, the flower can be trickier to find, but Chris Goldade, a regional program manager for South Dakota Game Fish and Parks, says it’s definitely possible to spot the spring welcomer in this part of the state. “In Brown County along some of the creeks and streams you can find nice native prairie. By Foote Creek, near the hills that drop off into Richmond Lake at places, and in northern Brown around Willow Dam near hills that roll into the Elm River are some of places I’ve seen them.”

Finding a blooming pasque has as much to do with timing as location. The word pasque means Easter or Passover, and it’s likely the first European inhabitants to the region named it so for flowering during these holidays. Some still refer to it as the Easter flower, May flower, or even prairie crocus. Most South Dakota plant handbooks agree that the pasque usually blooms between April 15 and May 1. Depending on the year and conditions, it can flower earlier. Once it has bloomed, it will lose its sepals (or petals) in about two weeks. The window is small for finding them while they’re showing off their shades of purple, and since they’re one of the first flowering plants of the season, people aren’t usually on the lookout and miss them.

When it isn’t in bloom, it can be even more difficult to identify the pasque flower. As is common for a tundra flower, it survives by growing low to the ground and staying out of the wind and is soon overtaken by taller plants. Chris says an easy way to determine if a plant is a pasque is to pull off a little bit of leaf material, crush it between your fingers, and sniff gently. “It has a strong ammonia smell, it’ll almost burn your nasal passage if you sniff it too strongly. That ammonia odor is how you can tell it apart from other species that look similar to it in its vegetative leaf state.” If you do find a pasque flower, enjoy it, but it’s best to not disturb it or try and move it to your garden. Chris explains, “Like most of our native plants, it has a very deep root system and trying to transplant it is going to be a lot of shock to it. It likely wouldn’t survive.” 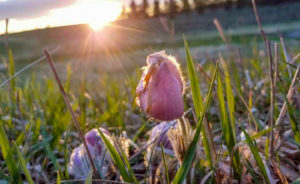 The pasque flower has important uses, both historically and in present day. American Indians living in the Dakotas used it to some extent medicinally as a counter-irritant for painful ailments such as rheumatism. Today, it is a key species that professionals use to identify if an area is truly native prairie or not. Perhaps it serves the most important role for early pollinators, as it is one of the only flowering plants available for their food source in the early spring.

It is a tradition in my family to go looking for the pasque flower around this time of year, right when we are starting to grow especially anxious for the weather to change. Between the end of March and early May, when the afternoon sun is noticeably warmer, we set out in coats and boots to hillsides near our farm where we know the flower likes to frequent. Finding the flecks of purple among the half-melted piles of snow and still brown grass is a reassurance that everything else will soon follow the pasque’s lead and grow again after the long winter rest. South Dakotans have had pride in our small but sturdy state bloom for a long time, even before legislators made it our official flower in 1903. Perhaps Badger Clark, a South Dakota poet laureate, described our love for this tiny flower that grows when few other things can best when he wrote, “A starlet of hope with center of joy. For out of the cold turf at the edge of the snows. The brave little, grave little pasque flower grows.” // –Jenny Roth

Written in memory of George Mohr, my friend and a friend to many people and many flowers.

A special thank you to Chris Goldade of SDGFP for providing information for this story, and to the many nature lovers in the South Dakota Plants & Wildlife Facebook group who submitted their pasque flower photographs. If youíve found pasque flowers in or around Brown County, write to us and let us know!