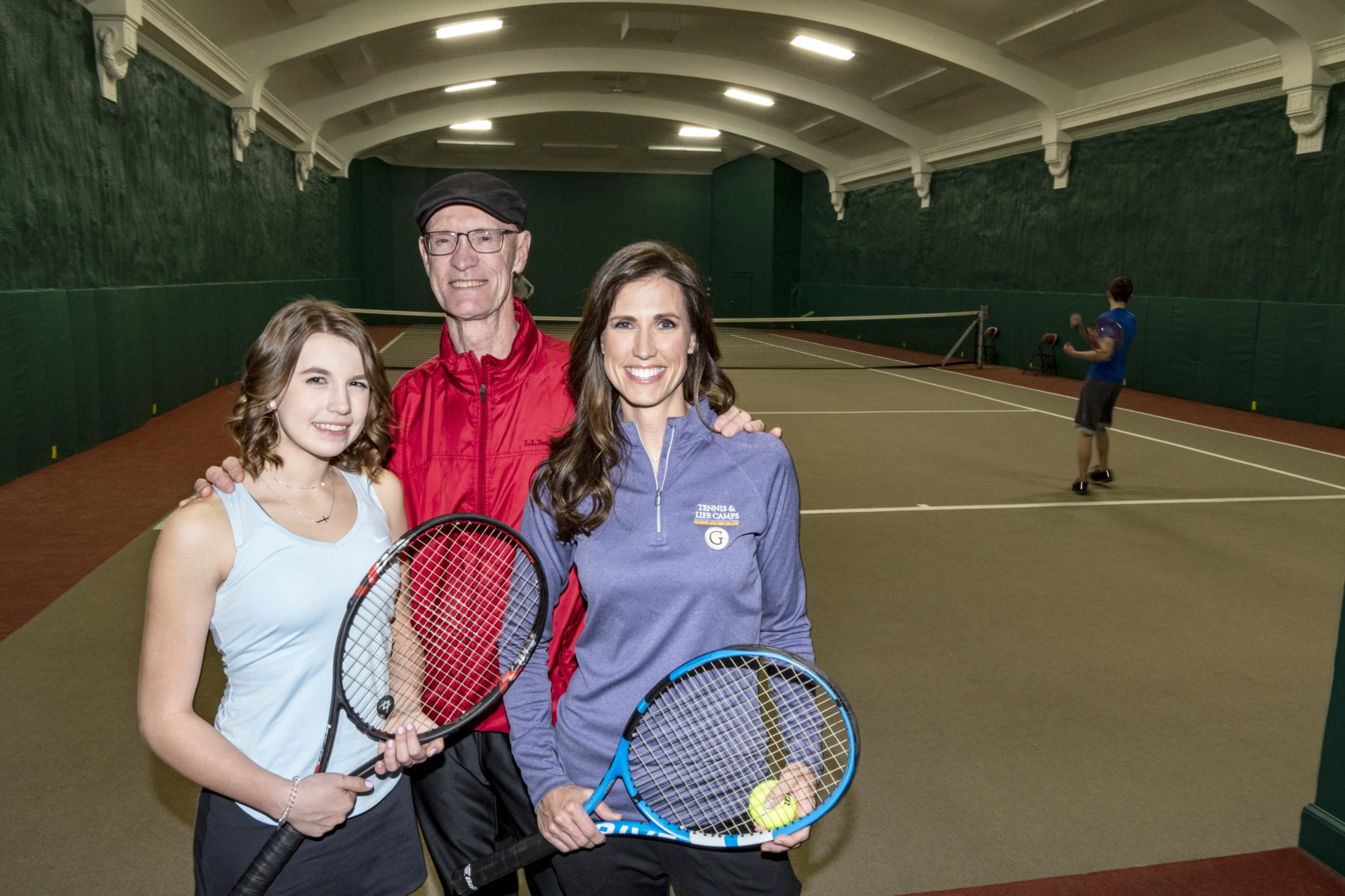 “I like things where I have to take all the blame,” says Kelly Rae Haskell, “and get all the credit.” She’s talking about tennis, which is fundamentally an individual game, although her fourteen-year-old daughter Hallie, who plays tennis for Roncalli, adds that she likes contributing to the team too. As a town with a rich tennis heritage, Aberdeen may need more advocates with the Haskells’ attitude.

The landscape—literally—of tennis in Aberdeen has changed in recent years. Word once was there were more tennis courts per capita in Aberdeen than anywhere in the country, but the number of those courts has dropped by about half in the last decade or so—victims of other recreational facilities. “I remember lots of good players in town and when you could hardly get a court,” Bill Edwards, Kelly Rae’s father, says. Now it’s easier.

Aaron Kiesz, president of the Aberdeen Community Tennis Association (ACTA), an organization that’s been around Aberdeen under one name or another for decades, acknowledges, “Tennis is down, no question about it.” John Carrels agrees, but believes “all sports are down all over. There’s so much more for kids to do than before, and not as many are playing sports because they have too much else to do.” In terms of tennis, he adds, “Aberdeen doesn’t have the same kind of feeder that we had when I was at Northern, when tennis players stuck around in the summer to teach the game.” 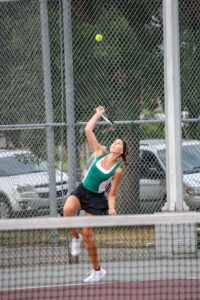 On that note, Aberdeen has had its share of tennis champions in the past, both in the sport and for the sport. Vern Malsam remembers hitting by himself at one of the courts when he’d first moved to town decades ago. “This old guy came to the court, so I asked him if he wanted to play,” he says. They played a three-set match, and the old guy won 6-0, 6-1, 6-0 (for the uninitiated, that means out of 19 games played, Vern won one). “So we finally introduced ourselves,” Vern says. “‘I’m C.C. Lee,’ the old guy said. ‘I own these courts’”—and he wasn’t just talking about the trouncing he’d just handed Vern. Obviously wanting more places to play, the former K.O. Lee Company president donated money to build several courts in town, and was, says Chuck Kornmann, “a main driver of tennis in Aberdeen.”

But even C.C. Lee couldn’t overcome Aberdeen’s weather. Tennis can be a year-round sport, but not if you can only play outdoors. Hallie Haskell notes that in the two months of her 2018 high school season, she played in temperatures ranging from 98 degrees down to 32 degrees. Given that climate, Chuck cites Duane Thurow and Bruce Cutler as tennis heroes for creating the indoor tennis court upstairs on Main Street (above Karisma), which opened in 1977 in a space that had previously been a bowling alley and a ballroom. Jerry Sayler, whom John Carrels calls a “tennis legend in Aberdeen,” ran the place—and, says Chuck, “He was also always available to play if you needed a fourth guy.” Chuck and other tennis players set up Aberdeen Tennis, Inc., a company that paid the rent for years. Then Mike Evans took over the space, and Aberdeen Tennis gave him the assets—“basically the net and the carpet,” according to Chuck. The place has pads on the walls, which are just a few feet from the sidelines, and there’s a sign reminding players to bolt the door at the top of the stairs while playing, thus preventing them from chasing a lob down a 25-foot staircase. Mike upgraded the court with air conditioning, bathrooms, and showers, although the latter might not get the use they once did. Chuck notes, “We used to shower in the locker room there. Now we just go to Lager’s and drink beer.”

Some other champions of tennis in the Hub City include former Central coach Lisa Link and former Roncalli coach Colette Quam, who ran tournaments and brought in tennis pros. Judy Rezatto ran summer programs, gave lessons, and coached Roncalli teams. Several people mentioned Burt Elliott, who coached boys and girls tennis at CHS for a total of 36 years and has a girls tournament named for him. “Burt was a great advocate of tennis who didn’t play the game,” John chuckles. Kelly Rae, who played for Burt, agrees. “He was a good guy, a wonderful coach who really cared about his athletes as kids and wanted to build them up as leaders and people. He taught life lessons, but I never saw him play.” 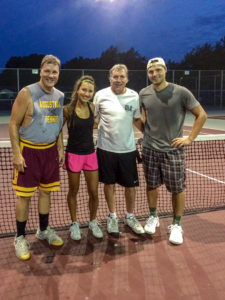 Tennis is a family and generational sport. Tim Davies, who is in his 60s and was a standout basketball player for Roncalli and Northern (third from left), got together for a doubles match with John Carrels (55), Erica Carrels (20), and JD Carrels (26). Photo courtesy of John Carrels.

There have been other important players in Aberdeen’s tennis story. John Carrels credits the influence of Doug Smith, one-time head of the Aberdeen Racket Club (forerunner of the ACTA) and former NSU tennis player, who stuck around and helped teach a lot of young players, including the Central athletes who taught John. Some tennis players who helped Central win team state championships in 1972-74 coached John’s elementary football and basketball teams at Sacred Heart School and also taught them tennis. They were so successful that when John and his friends got to high school, their Roncalli tennis team beat Central four years in a row (John also came home with three state titles—two singles and one doubles). John went on to play tennis at NSU and paid forward the favor of Doug Smith and his protégés by teaching tennis during his college summers.

Kelly Rae learned tennis from her dad, Bill Edwards. “I played golf in high school and at Northern,” Bill says, “but I realized it wasn’t good exercise, and it took so long to play a round that I took up tennis as an adult.” Kelly Rae started playing in earnest around age 12, after Bill took her to the US Open tournament where the 12-year-old Kelly Rae got an autograph from 13-year-old Jennifer Capriati. That was when Kelly Rae got serious, playing upstairs every Saturday morning, even leaving sleepovers early to go hit. She continued with tennis at Central and the University of Sioux Falls. She credits a lot of father-daughter time for keeping the game fun, and that continues for her and her daughter Hallie.

Whether or not its numbers are down in Aberdeen, tennis still has a lot going for it. Aaron Kiesz observes, “Middle school numbers for players are up, and that’s a good sign.” ACTA offers tennis social opportunities and tournaments to keep the game appealing for busy people. Even though most of the players I talked with sensed a decline of tennis in Aberdeen, they continue to play and don’t have trouble finding someone to hit with.

One tennis plus is that it’s a lifelong sport. Hallie mentioned a video of herself trying to hit a ball over the net at age three. Chuck Kornmann, at 81, still plays and says that when he’s in Florida, he sometimes plays with a 95-year-old former Marine veteran of the World War II Battle of Guadalcanal. Why does Chuck still play despite back surgery and knee problems? “Because I can!” he says. “It’s wonderful to be out there, and it’s better than a nursing home.”

It’s a family sport too. Although he really picked up the sport from those Central tennis players, John Carrels’ parents both played, and he and his mom once won a tournament in Brookings. All three of his kids played high school tennis, and his wife plays too. “It’s a family affair,” he says. Kelly Rae, whose husband and four kids play, enjoys going to tournaments when everyone in the family can play.

Finally, it’s inexpensive. In Aberdeen, a beginner could buy a racket, a year’s supply of balls, and Parks and Rec lessons for under $100 (as you play more, you’ll spend more). Other than rent for the indoor court, it’s free to play on Hub City courts.

Some argue that tennis is suffering from the lack of star American players—a point that may acknowledge that Serena Williams is now more of a galactic superstar than merely American. John Carrels isn’t sure about that argument, but he regrets the lack of a college tennis program in town, which in the past provided more summertime teachers and coaches who taught and passed on their love for the game.

Kelly Rae observes, “For any sport, you need someone who’s passionate about it to make it accessible and fun and big in the community.” A champion. Maybe that person was sitting across the table from her. Hallie says she wishes there were more kids playing. When asked what she would tell kids to get them to take it up, she says, “Tennis is really fun!” Then she adds, “I’m available to hit whenever they want!” One person at a time. // –Patrick Gallagher