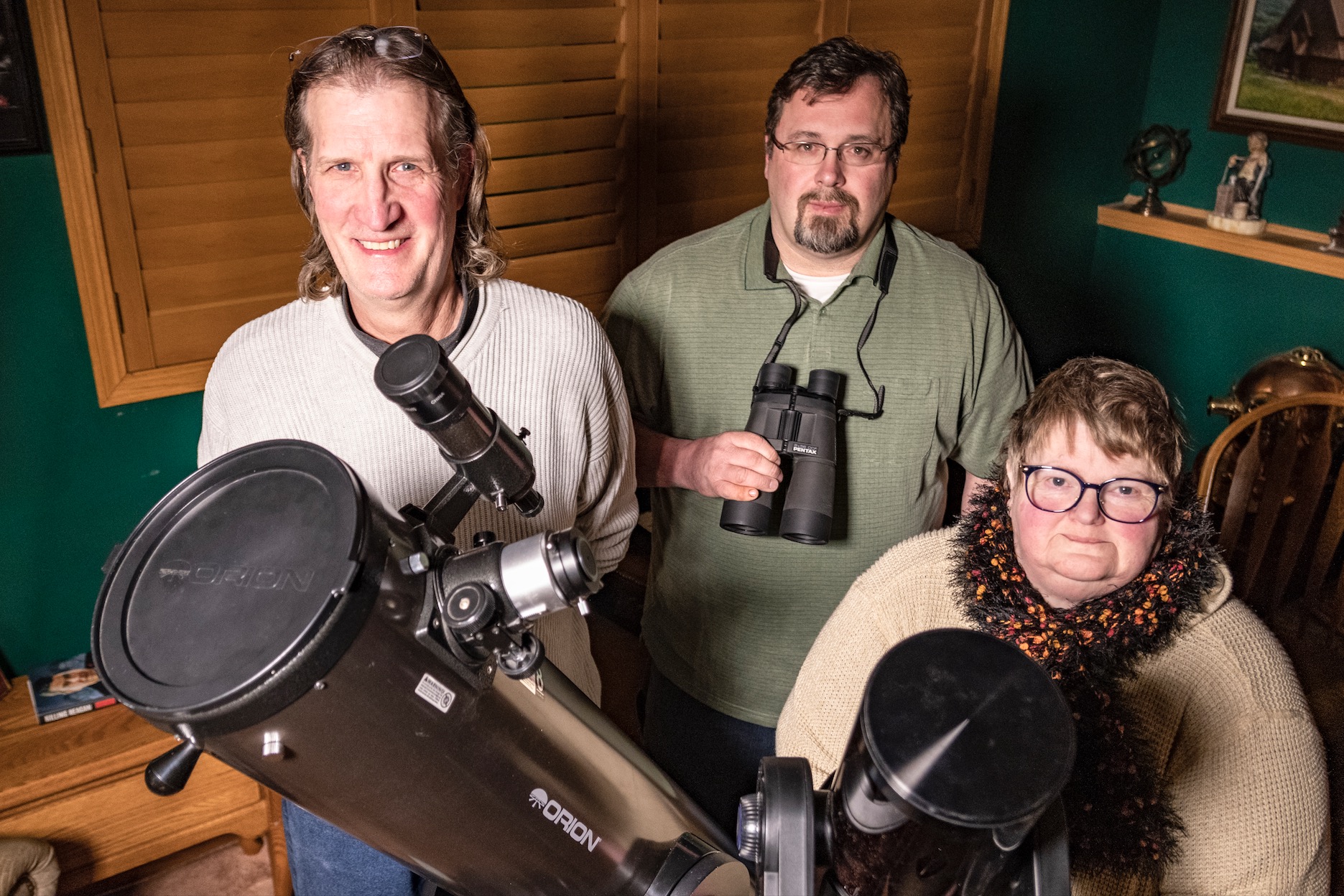 Stargazing is the hobby that never fails to amaze

One of my favorite college classes was astronomy. I remember being home from school for Thanksgiving and pointing out the constellation Orion to a girl I liked, but it made no more impression than talking about the quadratic equation. When I saw it again a few months ago, it was Orion that got me thinking there must be other people in Aberdeen who know way more about the sky than I do. I was right.

These amateur astronomers used words like “awesome,” “amazing,” and “phenomenal.” That’s a pretty good hobby. And they all want you to gaze at the stars too.

“When I was little, Dad would take me outside, and we’d lie on the ground and look at the sky,” Jacki Omland said. “He’d talk about the constellations that we saw.” Jacki has loved the sky since her youth in northern Minnesota. “At our farm, there was no such thing as farm lights or trees,” she said. “You could see horizon to horizon. We were so far north we saw the aurora borealis 150 nights a year.” At the University of North Dakota, she took astronomy from a professor who “looked like Einstein” and had students stay all night on top of a building to look through a telescope. When she came to Aberdeen to teach at Central, she tried to convince her principal to offer an astronomy class. “The principal said okay if you can get 20 kids to sign up,” she remembered. “Sixty signed up.” Today teaching online and video high school science classes for Northern, she taps into her own youthful wonder with an activity in which students lie on the ground, look at the sky, and compare what they see to a star chart.

“I grew up in the generation of the Apollo missions,” said Kurt Drube, who teaches at Holgate, and he got into astronomy when he was young. That first flame died out until about ten years ago when he got interested again. He started looking at the sky with binoculars until he knew almost instinctively what would be up there at any time.

Similarly, Tim Sersen said, “When I got married, I interned in Minnesota and used binoculars to look at the sky. I got an astronomy magazine which had a great monthly guide to the sky.” The recently retired minister at Aberdeen’s Good Shepherd Lutheran first got the astronomy bug in third grade. He got a couple telescopes in his youth, but it wasn’t until he was an adult that he came to understand the sky.

As a kid, Del Rohrbach “had a lot of curiosity about the sky,” although, he laughed, “I always thought Orion’s belt was the Big Dipper.” His interest faded until he grew up and moved to Las Vegas, where he met someone with a telescope and was intrigued all over again. “There was good sky there, it was less cold, and the air in the desert was stable,” he told me while we stood outside on a 15-degree November night. Then he said, “Sometimes I miss the desert.” 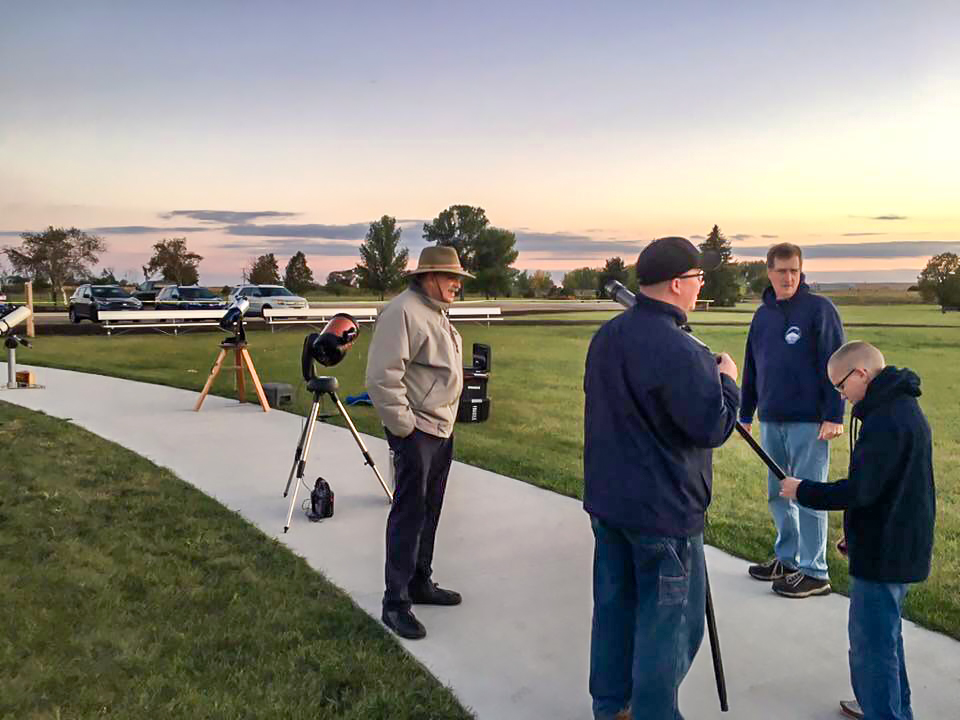 Aberdeen Parks & Rec hosts beginner astronomy classes, like the one pictured here at the Kuhnert Arboretum, to help new skygazers grow their interest in the hobby.

As Del’s interest returned, he bought a telescope and was able to look closely at Orion’s belt. “I saw the nebula there and was amazed! I was hooked.” And, he added, “I got ‘aperture fever,’ always needing bigger and bigger telescopes.” He laughed, “It never ends.” When he saw the Andromeda galaxy, he wanted a still bigger telescope and got one with a 17.5-inch diameter mirror. It comes in two pieces, each about four feet long, and you need a ladder to assemble and look through it (for easier transportation, he also has a 10-inch telescope about half as tall as the big one). Kurt felt the fever too: “I got a telescope, then another, then another. You think, ‘I want more!’” The Central golf coach added, “It’s like wanting a new driver to get that extra 10 yards.”

Tim, on the other hand, still uses the secondhand telescope he bought when he moved to Illinois in 1981. “I’m kind of ‘old school’ versus high tech,” he said. Proving it, when we met, he brought a planisphere, a paper star chart with a map of the sky—you spin it around to align with the date and time you’re stargazing, and it shows you what’s overhead. There are great mobile apps for astronomy, but “starting with those will never let you learn where things are in the sky.” On that point, he remembered a stargazing party in Illinois: “A man brought a telescope that was so big he had a crane in his truck so he could move and assemble it.” When it was all put together, “The guy asked where to point it.” All these folks stressed learning the sky before spending a lot of money on the hobby.

Our four astronomers have watched the sky from great and unusual places. The best place Kurt has ever watched the sky was Hawaii’s Mauna Kea Observatory, which is on top of a volcano. “It was awesome to see the sky up there,” he said. “You’re looking through half of the atmosphere you’d get on the ground. I never saw so many stars.” One of Del’s favorites was a place he didn’t even get to look. He went to the Lowell Observatory in Flagstaff, Arizona, which was set up for anyone to look through its massive telescopes, but the weather didn’t cooperate. “Still, I got to see the telescope that Clyde Tombaugh used to discover Pluto,” he said. “It was awesome.” Jacki remembers a daytime experience, when she was in Norway above the Arctic Circle on the summer solstice and witnessed the sun never setting: “The sun just makes a big circle in the Northern sky during the day.” Tim loved gazing from the wide open spaces of Wyoming, but he had to get creative when he lived in more congested, and light-polluted, Illinois—“Rural cemeteries are a good place to find dark sky.”

While Aberdeen’s amateur astronomers have traveled to great places to look at the stars, you can see the sky anywhere, even here. As Tim told people who asked how he could leave the Tetons, Wind River, and other beautiful Wyoming places to come to South Dakota: “We’ll still have the sky.” For best viewing, however, you do need to get a little ways out of town. Even the light pollution of Aberdeen can hide much of what’s up there. Fortunately, Jacki noted, “You just have to get a few miles out of town, and it can be phenomenal.” Sadly, Jacki added, the best time to stargaze is in the winter, “when the air is crisp and clear.” Plus, the longer nights offer more viewing time. Although it may be more comfortable, Tim noted that summer may only offer a couple hours of astronomical night (when the sun is far enough below the horizon not to scatter light in the atmosphere—and muddy a good view). But the sky changes every night as the Earth moves through it, so you want to look throughout the year.

And you should share the experience. “You can do astronomy alone,” Kurt said, “but you can also enjoy doing it with others. The best experience is the reactions people have when they look through the telescope.” All these astronomers look for ways to share their passion with others. Kurt has taken his telescope to Wylie Park during the day, such as when sunspot activity was high, and let people look. He also sets up his telescopes at Holgate on dark mornings before school, just to let kids see what’s up there. Similarly, Del has set his telescope up in the parking lot at work to let others see planets.

Jacki sets her telescope up on the sidewalk in front of her house. “I like to get people interested,” she said. “A jogger stopped once to make sure I’d be there a while so he could bring his kids back.” When she taught at Central, she took the school’s portable planetarium to the mall and to other schools to spark interest. In the mid-2000s, she ran a six-week Upward Bound summer program at NSU. Years later, one girl got word back to Jacki that, thanks to that program, she was majoring in astronomy at the University of Minnesota.

As another way to share the experience, Kurt and Tim launched Star Parties for the Aberdeen Parks and Recreation Department in 2017. They’ve taken their telescopes to the Kuhnert Arboretum several times over the past couple summers and invited visitors to look at the skies. “The sky is different each month, so we planned around that, and people saw different things,” Kurt said. At one point, he added, “We showed people first Venus, then Mars, then Jupiter with its stripes of clouds and its four Galilean moons, then Saturn and its rings.” Then, he smiled, “Their eyes go wide! That’s why I do it. That’s awesome!”

The sky is awesome, and so are Aberdeen’s local sky evangelists, who invite you to check it out too. Del told me Orion “never fails to amaze.” Neither does the sky. I guess that girl all those years ago didn’t know what she was missing. Neither did I. // –Patrick Gallagher