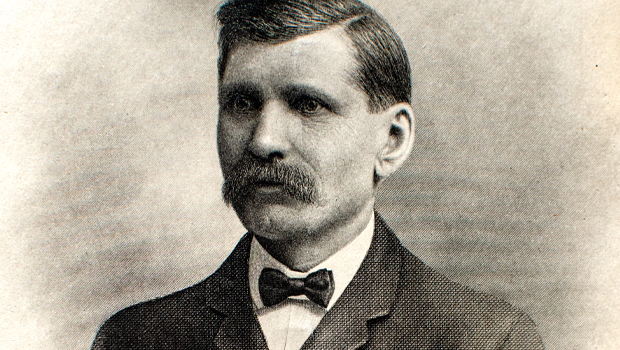 How John Zietlow built a multimillion-dollar telecommunication company in Aberdeen

John L.W. Zietlow was born in Greotzien, Germany, on December 8, 1850, the son of a farmer named Ferdinand Zietlow. He attended the finest national schools in Germany and learned the skill of watchmaking from an expert artisan. Sometime during his youth, his father left the family for parts unknown.

In 1867, at the age of 17, Zietlow made the decision to come to America. It is uncertain which immigration port he came through, but at that time New York City and Philadelphia handled almost all immigrants coming into the U.S. Upon entering the country, Zietlow made his way to Wisconsin and gained employment in the area sawmills, gradually moving up in the ranks. He prided himself on tinkering with and improving the ways of doing things mechanically, putting his watchmaking talents to use in other areas. 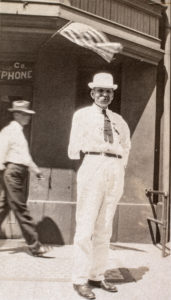 Due to a sawmill accident in his early days, Zietlow lost his right arm to just above his elbow.

In 1873, a terrible accident occurred at the sawmill and Zietlow lost his right arm to just above his elbow. While recovering in the hospital, the bank that he and others in the area used went bankrupt, and he lost all his savings. When he was well enough, the sawmill he had worked for helped pay his tuition to attend a commercial college in Naperville, Illinois, where he took a six-month course in bookkeeping, penmanship, and business law. Upon graduation, he returned to the sawmill as a scaler and soon moved up to the position of superintendent. On March 4, 1878, Zietlow married the love of his life, Miss Martha Hewitt, in Newton, Wisconsin. Their first child, John Ford Zietlow, was born in 1879.

In 1880, Zietlow accepted a manager position with a small startup company and moved his family to Stillwater, Minnesota. The company, which was to become the Northwestern Manufacturing and Car Company, was looking at a variety of products including telephone service and portable sawmills. They were unique in that many of their employees were convicts from the local prison. It was here that Zietlow met one such convict named Charles Emner, who was also an extremely talented electrician. The two men took a liking to each other and began playing around with the new invention—the telephone. They bought two mail-order phone kits and greatly improved the sound and transmission quality of the equipment.

Zietlow’s daughter Essie was born in Stillwater in 1883. Toward the fall of that same year, he saw a newspaper article that told the tale of a Dakota Territory farmer named Ferdinand Zietlow who had been badly burned. He immediately went to Dakota Territory and confirmed that this was indeed his estranged father. His father died shortly afterward from his injuries. Zietlow then moved his wife and children from Stillwater to claim the family homestead, located near the towns of Athol and Ashton in Spink County. He gave up the corporate life to be a one-armed farmer, which was difficult at best. His second daughter, Nina, was born in Athol.

Zietlow toiled on the farm but kept tinkering with the telephone too. He was aware of Alexander Graham Bell’s efforts to provide telephone service and how he was doing it, but he pursued a different way. A fellow inventor from Germany, Phillip Reis, had invented a machine that transmitted musical notes over a wire, but he was never able to transmit language that could be understood. The Reis phone used different electrical principles than Bell’s system. Zietlow tinkered with this system and created his own similar phone. He discovered that a small adjustment to Reis’ original wiring schematics made it transmit language that was easily understandable and was quite clear with little or no interference. It was much better than Bell’s system.

In early 1886, Zietlow received a letter from his convict friend Charles Emner, who had served his time and moved to Washington, D.C., where he hit it big in real estate investments. Emner encouraged Zietlow to get into the telephone business and offered to help him with financing. As word spread of Zietlow’s plans, several prominent Aberdeen investors, including A.C. Mellette, approached him about starting a telephone company. With backing from Emner, Zietlow started the Dakota Emner Telephone Company in September 1886 and a second company, the Aberdeen Telephone Company, a month later with financial backing from local investors. He then moved to Aberdeen to set up the phone service to Aberdeen, Columbia, and Bath. 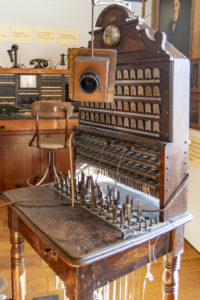 The Dacotah Prairie Museum is home to much of the early telecommunication equipment designed by John Zietlow.

Zietlow himself set all the poles, strung all the wire, built the switchboard for his new phone technology and service, and signed up subscribers. By February 1887 the system was operational along a 10-mile maze of wires servicing 60 phones. His wife and children worked as phone operators and messengers. With everything in place, Zietlow patented his phone and began using it in his companies.

Bell got word of Zietlow’s start up phone company, and in 1887 his attorneys began to sue Zietlow and his companies for patent infringement. This tactic had worked well for Bell, as he had crushed the Western Union Company, Thomas Edison, and everybody else in court who had dared to try and compete with him. Being the sharp businessman, promoter, and top-notch mechanic that he was, Zietlow didn’t get himself caught up in the Bell legal game. By developing and utilizing totally different technology, and receiving his own patent, he left Bell with no legal leg to stand on. Bell tried numerous times to sue Zietlow but lost each time. He finally gave up in 1896.

Zietlow’s telephone company began to struggle in the early 1890s. By 1896 he was in debt to the tune of $5,000 with only $1.50 in cash capital on hand. He had spent $20,000 of his own money so far, and many of the early local investors had become discouraged and faded away. To get out of debt and save the company, Zietlow decided he must expand phone services to Redfield. To promote this and raise the needed funding, he sold tickets to buyers for $1 each that entitled them to make four calls per ticket when the line was completed. His promotion was successful. He raised enough money to hire crews to set the poles and string the wire in the new system from Aberdeen to Redfield. 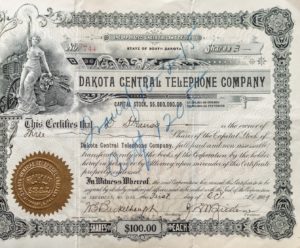 A Dakota Central Telephone Company stock certificate, part of the Zietlow collection at the Museum.

On November 6, 1905, Zietlow’s telephone company and Aberdeen scored another first in telephone history. Aberdeen was the first city in the United States to have automatic dial service! It also now owned 10,000 miles of transmission lines connecting all of eastern South Dakota, some of eastern Minnesota, and most of southern North Dakota. In nine years, from 1896 to 1905, John Zietlow turned his debt-ridden, on the brink of bankruptcy telephone company into a juggernaut now worth several million dollars.

Over the next 12 years, Zietlow’s Dakota Central Telephone Company grew and grew. New innovations made for better phone service, and in 1917 another first in the history of telephone service occurred in Aberdeen. Zietlow’s phone company was the first to provide commercial long-distance dial service in the United States when the service was introduced to customers in Aberdeen, Huron, and Watertown. The line was completed December 5 of that year by John Wicks, an engineer for the Automatic Electric Company. The dial switching equipment was located in Doland.

John Zietlow died on November 14, 1922, at his home in Aberdeen. At the time of his death, the Dakota Central Telephone Company was the second largest employer in the state of South Dakota, behind Homestake Gold Mine. In terms of assets it was the largest company in the state, valued at over $5,000,000.

In 1928, four years after his death, Zietlow’s company was sold to Tri-State Telephone, who then sold it to Northwestern Bell in 1934. However, despite these companies buying it, they kept the name Dakota Central Telephone Company until 1942 when by a court order Dakota Central Telephone Company was dissolved. It was the most successful independent telephone company in history. Right here in Aberdeen. // –Mike McCafferty

The History Committee of the Brown County Museum and Historical Society. History of Brown County, 1980