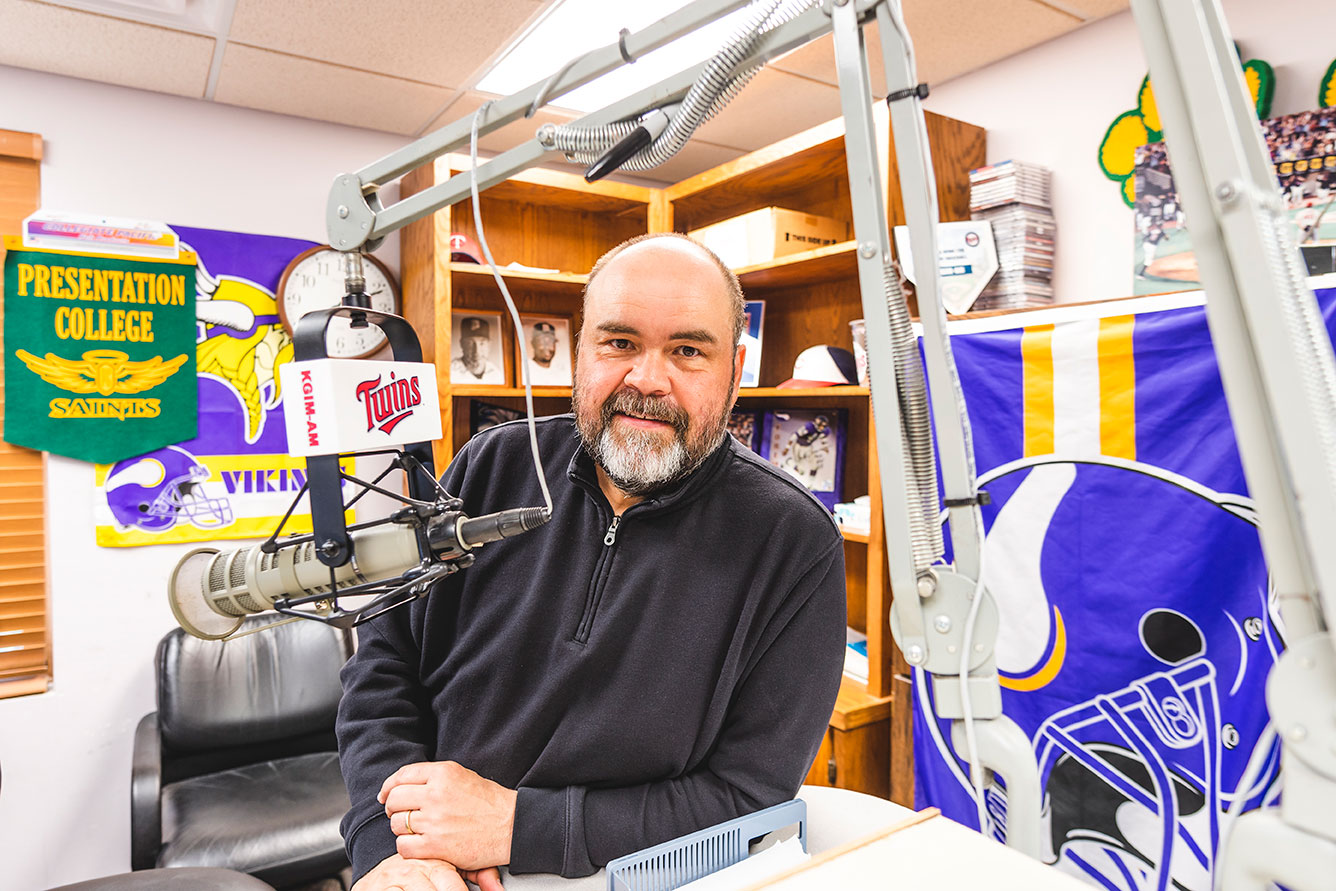 Doc Sebastian shares the art (and science) behind a career in radio.

ABERDEEN, S.D. –How many guys do you know who do 15 hours of work a day, can be in three places at one time, and still get in a round of golf? A guy would have to be some kind of witch doctor to pull that off. Cue Hub City Radio announcer Doc Sebastian—even though he’s not working as hard as he did when he started in radio 40 years ago. The secret lies in the reason he doesn’t call himself a DJ anymore.

It’s not such a surprise that Doc ended up in radio, even if it was by accident. Like most late baby boomers, he used to listen to radio all night—Top 40 AM stations from across the country like WLS in Chicago, KOMA in Oklahoma City, WOW in Omaha, and others. He laments, “There aren’t any more of those 50,000-watt stations that covered a dozen states.” But Doc listened a little differently from most. He says, “I remember a Chicago DJ that would play a 45-rpm record (author’s note: look it up) then give it away. I focused on how the music was presented by the guy on the air.”

Plus, he was a natural with a microphone. In high school at Aberdeen Central, he did the announcements after lunch on the PA system. Sometimes, he did his impression of the iconic DJ Wolfman Jack (look him up). A teacher once caught him in the hall afterwards and told him he should be in radio. Doc had never thought about radio as a profession, but it came to pass only a few months after graduation.

In the fall of 1978, he went to the National College of Business in Rapid City to be an accountant (even though the dad of his future Hub City colleague Scott Solberg had failed him in accounting at CHS). That career path lasted nine weeks. At home over Christmas break, he broke his ankle playing basketball and didn’t go back to school. When he got his cast off, he interviewed at KKAA-AM, the country station in Aberdeen that his dad listened to. In fact, his dad saw the ad and suggested he apply. “He was trying to get me out of the house,” Doc explains. He got the job, the overnight DJ shift, which was ironic because Doc hated country music. The first song he ever played on the air was “The Gambler” by Kenny Rogers. He ended up moving to the earlier night shift, replacing a guy who got fired for playing the Doobie Brothers instead of country.

After about a year at KKAA, he worked at a Rapid City station for a few months before following a couple of his bosses to Wyoming to start a station. One of his most vivid memories is the night in 1980 that John Lennon, a former member of the Beatles (look them up), was murdered. Doc was on the air, and the news came in on the AP wire as “John Lennon has been shot.” He waited 20 minutes for more news. “We didn’t have a TV in the studio then, and it took forever to get the rest of the story.” So he put on Lennon’s song “Imagine” and played the Beatles the rest of the night.

In 1983, he came back to Aberdeen and started at KSDN as the afternoon drive DJ. “It was very different from how things work now,” he says. “It was all live. You played records and sat in the booth listening to the song—whether you liked it or not. Nobody knows what that is anymore.” He’s thinking as much of his radio colleagues as his listeners, but more on that later.

Always envisioning himself as a West Coast DJ, he sent audition tapes in that direction and took a job in Oregon. After three months, however, the station changed its format and dropped him. “That experience kind of left a bad taste in my mouth—not about the art of radio, but the business of radio,” he says.

The next decade or so solidified that sense that on-air radio isn’t always a stable career. After getting married in Groton, Doc lived in Denver for a while, where “I did some radio part time, but mostly other jobs.” Back to Aberdeen, and Doc got on KSDN again, but the ownership changes in Aberdeen radio of the era messed with his career, and he ended up out of radio once more. He worked various jobs but kept waiting for an opportunity to get back in radio, although he grins, “Most smart people would have found something else.” Eventually, he found his way to Hub City Radio in 2002. Doc Sebastian was back on the Aberdeen airwaves.

Doug Swanson doesn’t remember exactly when he became “Doc Sebastian,” but “Everybody in radio had a different on-air name when I started. Now, almost everyone uses their real name.” His dad had called him “Doc” when he was little, which he figures came from “What’s up, Doc?” from the Bugs Bunny cartoons. Plus, there were other “Docs” and “Sebastians” in radio, so they were familiar names. Also, “The initials were the same for both names, and my signature looks the same for either name,” he laughs. “Today, a lot of people I work with don’t know my real name. People will call the station to ask for Doug and get told no one by that name works there.”

Four decades creates a lot of memories: interviewing Willie Nelson as a teenage radio announcer, the racist tirade he got from a caller angry that he’d played African American singer Anita Baker on the air, the time he fell asleep on air at 6:30 AM after an all-night station New Year’s Eve Party (the only listener at that time was the guy on the air before him, who heard the dead air and called in). Among many celebrities Doc met, one of the most special to him was former Twins play-by-play announcer John Gordon, whom he visited with on the air weekly during baseball season. Doc was one of only about a dozen local announcers (out of about 200 affiliates) that Gordon invited to his retirement party at Target Field.

Weather has impacted his career significantly too. “I’ve been stuck overnight in the station during a few blizzards—including my daughter’s fourth birthday in 1997. I was stuck in there overnight and all the next day.” He was also stranded there on a Christmas night a few years ago. Summers had their problems too. During a tornado, he remembers going out the back door of the station and seeing a grain bin rolling toward him. It hit the tower guide wires and stopped.

Now, he’s on the Hub City airwaves 15 hours a day on three different stations. He does three hours live on KSDN weekdays 6:00-9:00 AM, plus five recorded hours—“voice track”—on 97.7, and seven recorded hours on 94.1. “It takes about 20 minutes to put together the seven-hour show,” he explains. “I plug the songs into the computer, and it arranges them and tells me when I need to talk to fill space.” He adds, “I prefer less talk. My idea is shut up and play a song. After all, it’s a music station.” The voice tracking has led to amusing situations. He’s been on the golf course or at family barbecues when his voice came on the radio, and people stared at him blankly wondering how he was doing it.

Producing seven hours of music in 20 minutes means you’re not hearing any of the songs you’re “playing.” “That’s why I don’t call myself a DJ anymore,” Doc says. “There are no discs anymore. The music is all digital.” More than once, he’s heard songs for the first time while driving in his car months after he announced them on the radio.

No discs, all digital and computerized—as he says, “It’s not the art of radio anymore, it’s the science. That’s not necessarily bad, but it’s different.” The experience of the art is invaluable, however. In the old style of being a DJ, “It was your job to be sure the flow was there, moving from music to your voice and back to music. You got more into the show.” Having done it the old way is helpful in doing voice track because he has a better sense of the rhythm and how to make the transitions sound right. “For example, if you’re coming out of a fast-tempo song, your voice should sound different than coming out of a ballad. Since you’re not hearing the song in this approach, experience helps.” Especially, he says, “If you’re recording the Sunday morning show on Thursday afternoon!” He’s about the only announcer in town (maybe the only one) who has experience doing live music radio.

When asked about the future of radio in a digital world, Doc has a blunt but basically optimistic observation. “Twinkies, cockroaches, and local radio will survive,” he says. “The future of radio is local—more local content. The local guy talking about the snow we just had. You need to touch the local.” Spotify isn’t going to tell you about the hailstorm moving through Mansfield.

Despite the technological advances, the Doc formerly known as a DJ, who hasn’t played a disc on the air in two decades, remembers DJs he heard on those big-city AM stations in the 1970s. “Those guys were good at seeming to be talking to me, and that’s what I try to bring to the job.” It must be working, or those guys on the golf course wouldn’t get confused about how the Doc on the green is also on the radio talking to me. // –Patrick Gallagher