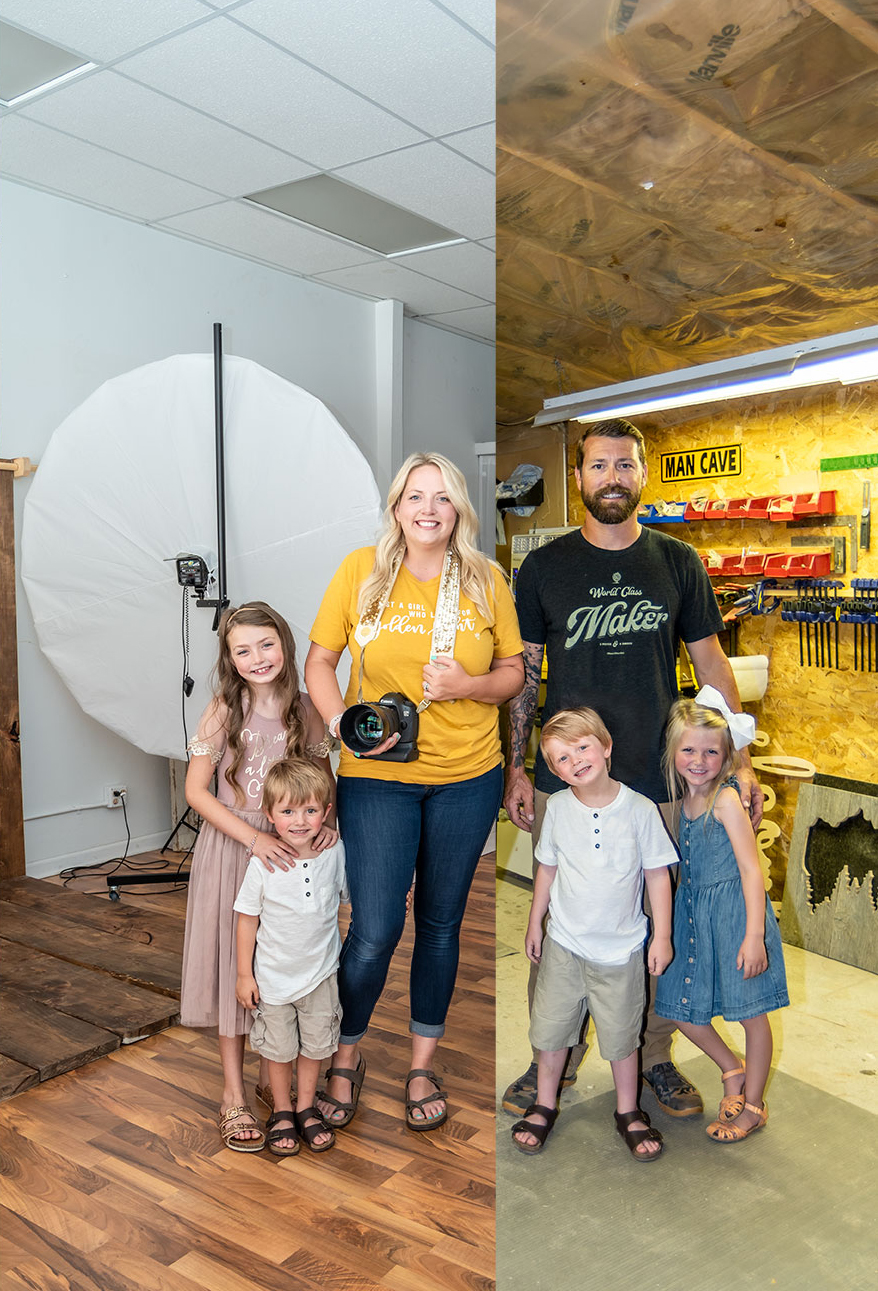 Derek and Abby Brick are raising four kids, working two businesses and a full-time job, and creating a life together. Is it busy? You bet. Is it worth it? Absolutely.

Baby steps have been the most important steps in Derek and Abby Brick’s life together. First, they come from the little feet of their four young children, ages three, four, five, and seven years old, who bring the craziness and the fun into their home. The high school sweethearts have also taken baby steps to build their careers. Abby is the owner of Abby Brick Photography, which is celebrating its 10th year in business. Derek, who works full time at Weber Landscaping in Groton, opened his custom woodworking company, D. Brick Designs, in 2017. Nothing they have grown has sprouted overnight. Rather, it’s been a steady cultivation of love and hard work that has gotten them to where they are on their journey so far.

It is almost 9:00 PM when I am able to catch the Bricks for an interview. As Abby puts it honestly, “We’re super busy, but somehow it all works out. Our kids are happy, and we still have time to have a life, too.” Anyone who works and has a family wants to know: How do they manage to do it all? The answer is with a lot of help. “We’ve been together 15 years and we’re both really creative people and into the same things,” Abby says. At home, teamwork makes everything happen, from driving the kids to their activities to doing the chores. And when they are both busy with their jobs, they have plenty of extended family to pitch in. “We are lucky in the fact that we have a lot of family around. We wouldn’t be able to do what we do if it wasn’t for them. They help with babysitting and are just supportive in everything we do,” Abby says. Their biggest piece of advice for others trying to juggle family and entrepreneurship is to be intentional with your schedule. “Make sure you set aside some time, whether that’s meals around the table or weekends, when work is put away and you can have those moments together. In balancing the numbers, make sure your family time is greater than your business time.” For the Bricks, that means Sunday is their day with the kids, even if they are doing something as simple as running errands together.

Of course, it isn’t always perfect. In reflecting on a decade in business, Abby explains that her biggest challenge is juggling that family-work balance. “The hardest part is that I am always working, even when I have walked away from the studio for the day. I’m still editing at home or answering messages from clients.” On the flip side, the best part of working for herself is that it allows her to set her own schedule and be home with the kids when she needs to be. Before starting a family, she photographed 25 to 30 weddings each year. Now, she has cut back to about 10 to free up her weekends more. In all, she has shot over 200 weddings in her career so far. 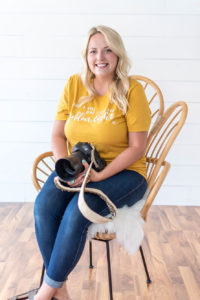 Abby started her photography business in her early twenties. She admits it was a little intimidating to jump into a field already saturated with well-known names like Ketterling, Bremer, and Hardin’s. Those studios had been around for years and were well-established. She was just a kid who had grown up pinning her photos to her bedroom wall and who didn’t have any professional props or lighting. Her parents, both of whom are entrepreneurs, encouraged her that starting small is better than not starting at all. “They told me, ‘You crawl before you walk.’ In business, you are not just going to take off running and have everything you dream of right away. You have to work hard to achieve it first,” she says. With a camera, MacBook Pro, Photoshop, and the most generic lighting kit money could buy, she rented a studio space for $250 a month in the basement of the Johnson Professional Building. Derek revamped it by installing flooring, countertops, and an office. Thrift stores provided a few chairs and props. And within a year, Abby had a steady stream of clients and was able to move her studio out of the basement and into its current downtown location. She has been capturing shots in her signature family-orientated style ever since. “I just knew it was what I wanted, and I went for it, even though I was winging it right away. Now I am at the point where I have taken people’s senior pictures, then their wedding photos, and then photos of their newborns and children,” she says. 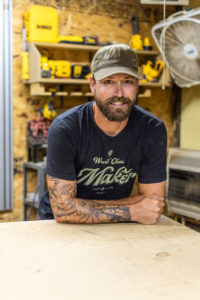 Inside the garage of Derek and Abby’s 1926 Aberdeen home, another entrepreneurial venture has recently begun to take shape. Derek jokes about how D. Brick Designs Custom Woodworking came to be. “I credit being cheap and not wanting to pay anyone to do anything for me,” he laughs. In all seriousness, landscape designers are short on work during the cold months of South Dakota, and after working at Menards for several winters, he was looking for something different. “I have always made things, and worked for a construction company in Groton for a few winters where I learned a lot too,” he says. He eventually made almost all the furniture in his family’s home, and friends started noticing his work and asking for their own custom wood pieces. A couple of years ago, he officially obtained a business license and has been creating everything you can think of ever since, including furniture, barn doors, mantels, bars, floors, ceilings, and home decor. He can look at a space for his clients, visualize an idea, and then sketch it for them to see based on what they want installed. D. Brick Designs is a creative outlet for Derek and has that same flexibility Abby talks about in choosing your own schedule. “I hold off on taking orders until the fall because I do not have much free time during landscaping season. I could fill up weekends doing this, but when Abby doesn’t have pictures, we try to do family stuff. Even though the extra money would be nice, it’ll be there later on, too,” he says.

Opening their businesses years apart has given the Bricks a unique view of how entrepreneurship has recently grown in Aberdeen. Abby says when she started, there was less going on downtown and less resources for small businesses. Why the boom in entrepreneurship now? “People are finally realizing that it is okay to take a shot at your dream. Go do it. If you have a goal you are supposed to go after it, that’s why they call it a leap of faith. If it works, it works. If it doesn’t, try again later or try something else,” she says. And take advantage of all the benefits of doing it your own way. For the Bricks, that means bringing their kids along to the studio or the woodworking shop whenever they can, building work around family, and enjoying the busy, wonderful chaos. Abby sums it up well, “If you take baby steps to where you want to go, eventually you will get there.” // –Jenny Roth