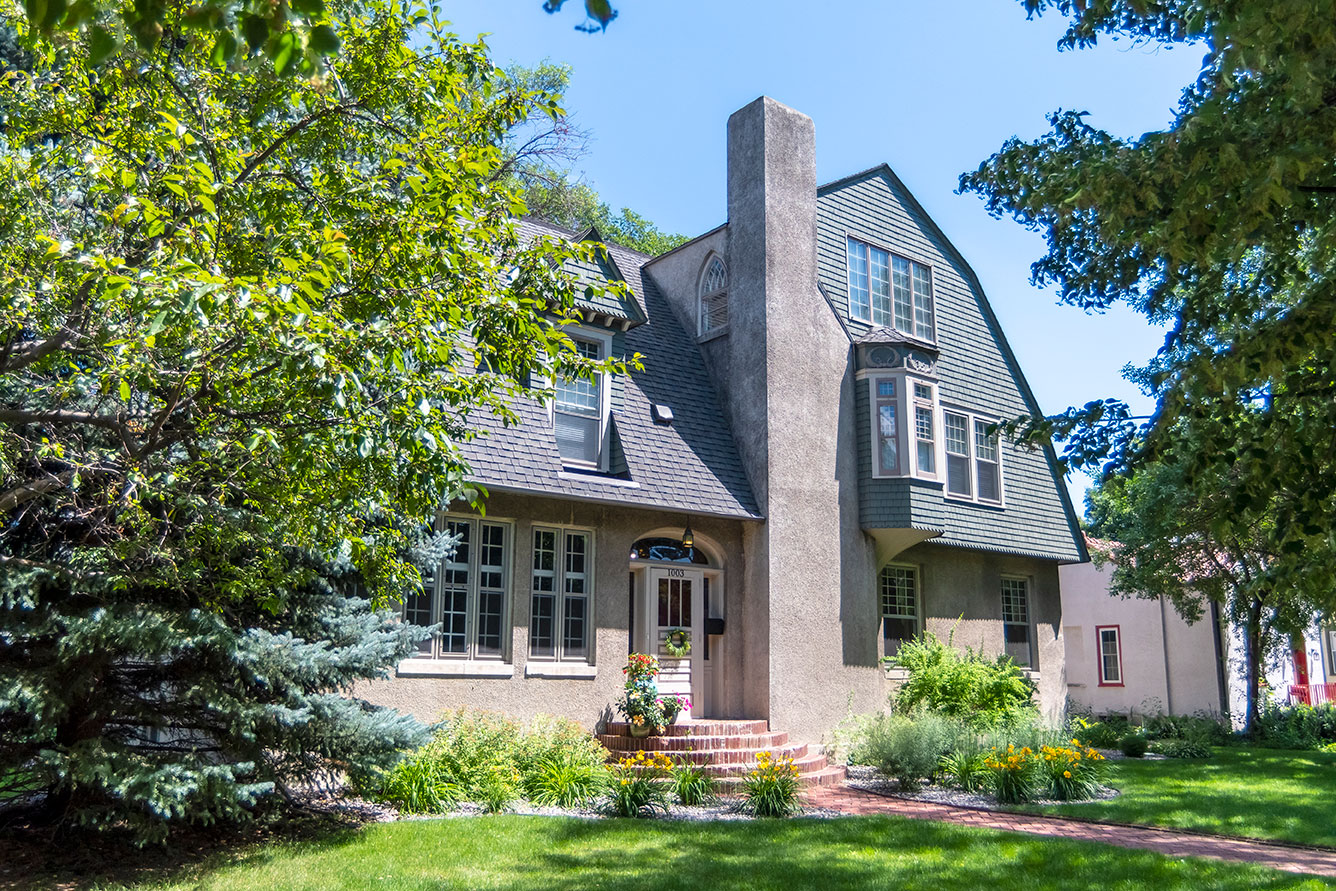 Built to host society parties in 1905, this historic home in south Aberdeen is still in pristine condition today.

It is our desire to include an Open House story in each issue of Aberdeen Magazine. You can imagine, however, not a lot of people want the inside of their house on display for everyone to see. As luck would have it, the house included here is on the market for sale, so all parties involved were very open to showing it to our readers.

Most people know about this house. It has an imposing stature in a deeply wooded area just north of NSU’s campus. It was built at 1003 S. Jay by William George Bickelhaupt, an executive at J.W. Zietlow’s Dakota Central Telephone Company (see “The Telephone Genius,” March/April 2019). Previous owners have restored every inch of the house. One owner even added a multi-stall garage complete with a bathroom, hot water, heat, and an apartment.

I find it interesting that the Bickelhaupts elected to build this noble house in the south part of town versus in the trendy new Highlands subdivision on North Main Street. In fact, when we think of grand old houses, the Highlands is what we think of, however, the NSU area contains some massive, stately homes, including one built for a former governor.

A lot of questions surround this house. When was it built (1901, 1905, or the 1920s)? Is it on the National Register of Historic Places? Why is it so big? A newspaper article from 1904 reports that a mason working on the new home was shot in the leg by a neighbor boy playing with a rifle. The Bickelhaupts moved in in 1905. In 1989, the home received National Registry status. The nomination form says the house is significant in the area of architecture because it is an excellent local example of the Shingle Style. Shingle Style homes were popular from 1880 to 1900 and are characterized by wood shingles covering most of the house. Only the upper floors of the Bickelhaupt house are shingled, the rest is stucco covering bricks. The reason the house is so big is because the Bickelhaupts loved to entertain. There are many accounts in local newspapers, before the house was built, detailing lavish parties by Mrs. Bickelhaupt. And, they had four children.

The Bickelhaupts were very well-known in Aberdeen and the emerging telephone business. William married Ida Owen of Wisconsin in 1887. He was already homesteading in Dakota Territory, and the newlyweds made their home in Roscoe, where all their children were born. William was in the grain business and owned elevators in Roscoe, Orient, Eureka, and Bowdle with a partner. In 1898, the Bickelhaupts moved to West Hill in Aberdeen (an up-and-coming “suburb”). It was then that William got involved with Mr. Zietlow and ultimately became invested in the telephone business. All the children were very successful and married women from other prominent Aberdeen families (like Jewett and Easton). Two of the sons served in both World Wars.

In 1900, the Bickelhaupts uprooted and moved to Everett, Washington, to start a milling company with other Aberdeen businessmen. In three years, they were back in Aberdeen. William reengaged with Zietlow and became the secretary-treasurer of the Dakota Central Telephone Company. He became president when Zietlow died in 1922 and retired from the position in 1930. His wife Ida died while visiting in California in 1921. He remarried in 1926 to a former principal of Lincoln Elementary, Harriet Steere, here in Aberdeen. The couple resided in Del Mar, California, until William’s death in August 1936. His body was brought to Aberdeen and placed in his former home on Jay Street for the funeral services. By this time, the house was owned by the Bickelhaupts’ daughter, Doris McKeever. William is buried in the Bickelhaupt plot at Riverside Cemetery.

Some accounts say that William was an architect and an engineer. I can find no evidence of that as he only appears to have been involved in the grain and telephone businesses. He is credited with designing the house himself. While the home is spectacular, it does have some odd qualities and incredibly large spaces. The dining room is exceedingly large with relatively small doors. Both the front hall and living room are very large too. The second-floor landing is the size of a living room and reveals a total of 10 doorways leading to the bedrooms, closets, staircases, and a bathroom. But as was mentioned, it would make for a great party house, with room for the sweeping formal dresses worn by women of that era.

According to personal accounts and the National Register nomination form, the house was remodeled in 1927. The front porch was enclosed, the front door was pushed forward, and a hand-painted (on paper) mural was added to the dining room.

In all, there are three floors of living space. The third floor has a full bath, butler’s pantry, game room, and theater room. This floor was no doubt the servant’s quarters.

The Bickelhaupts were definitely society people, and they were considered pioneers of the era. William advocated for the building of our former YMCA on the corner of 5th and Lincoln (now demolished). Ida was in all the social clubs, and both were very active members of First United Methodist Church. Unfortunately, the Bickelhaupt name is not well-known anymore. The three boys left town and pursued careers elsewhere. Doris lived in Aberdeen, with the married name McKeever. However, given the pristine, preserved condition of this 114-year-old Bickelhaupt home, their name should be around for a long time. // –Troy McQuillen

Inquiries regarding the Bickelhaupt House can be made to Andrea Holinka of First Premier Realty, www.firstpremierrealestate.com.