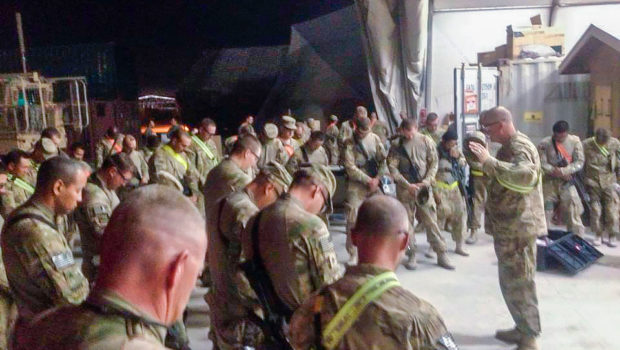 “Bringing God to soldiers and soldiers to God”—that’s the basic job description for military chaplains. It’s a noble calling for a minister, and both soldiers and chaplains in Aberdeen appreciate it.

“Chaplains are absolutely critical for the mission of the Guard today,” said Brig. Gen. Tom Croymans of Aberdeen, Assistant Adjutant General for South Dakota Army National Guard. “Readiness means more than just being physically fit these days.” He added, “We ask soldiers to do a lot—hard things. They have to be able to sort that out, and that’s what chaplains help with. They help address the things soldiers do and see.”

Father Mike Griffin, a National Guard chaplain from 2009-2017 and current pastor at Aberdeen St. Mary’s, said, “I had to do ministry a completely different way.” Chaplains are in charge of the spiritual needs of all troops. “They came from all faith traditions or none,” he said, “but the basic duty is that you perform or you provide”—perform a religious service or provide what soldiers need.

“I never felt good about clergy being exempt from service,” said Rev. John Hisel, associate pastor at First United Methodist Church, explaining why he enlisted in the Army during the Vietnam War. “I needed to kind of pay my dues, and I thought the guys could benefit from me being there.” When he was in seminary, a military chaplain had spoken about the chaplaincy. A few years later, he signed up and served from 1970-1975.

Father Joe Holzhauser, formerly at Aberdeen St. Mary’s and now in Pierre, also heard a pitch in seminary in 1980. “The chief of chaplains for the U.S. Army came and preached about the disconnect between church teachings and the killing of war,” he remembered. “I couldn’t condone war, but I wanted to support the men there, so I signed on as a National Guard chaplain” and served for 26 years. The seed was probably planted much earlier, however: “When I had my first communion in second grade, I saw a picture of a military chaplain. I decided when I grew up, I wanted to be a priest and wear that uniform.” 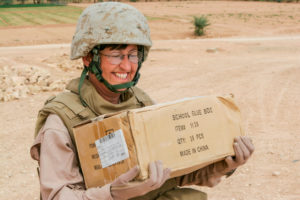 Rev. Kay Reeb of Peever is pictured delivering school supplies during one of her two tours in Iraq as a military chaplain.

Rev. Kay Reeb, the only woman military chaplain with Aberdeen connections I spoke with, joined the Navy in 1992 as a chaplain. The Peever native had been a youth pastor at Aberdeen’s Good Shepherd Lutheran and later in Oakes during Desert Storm. Many young people there were in the Reserves, and she worried who would look after them if they were called up, so she joined too. “I was too old for the Army, and the Air Force said they had too many Lutherans,” she said, “so I joined the Navy, and it’s been wonderful.”

The youngest of these former military chaplains, Fr. Griffin was the oldest to sign up—at 46. One day in 2009, a staffer at his Sioux Falls parish told him her brother in Iraq could only get to church once in 18 months. The next day, he received a letter from the National Guard about the military chaplaincy (adding to the coincidence, it was from the brother-in-law of another priest in his parish). After praying about it, he decided to give it a try.

Military chaplains must be ordained ministers to get the job, but there’s still training. Fr. Griffin’s nine-week chaplain school took two years to complete. “The course was divided into several phases to account for chaplains having parishes to attend to as well,” he noted. Like soldiers, National Guard chaplains keep their day jobs. In addition to “lots of classroom work on ministering to military life,” there was boot camp, “not as rigorous as regular boot camp, but more rigorous than I was expecting.”

Chaplains minister to soldiers during wartime and peace, at home and abroad. One of Rev. Hisel’s first assignments was at Fort Ord in California. “We counseled a lot,” he said. “Often the soldiers walked in devastated about something.” In addition, the draft caused “built-in resentment for being where they didn’t want to be,” and he worked with a lot of soldiers who wanted out.

While National Guard chaplains participate in regular trainings along with soldiers, they’re on call the rest of the time too. Sergeant First Class Jamie Bachman, with the Aberdeen unit, said, “It’s a family, and we’re people, and people have problems. If I have a soldier with behavior or family issues, usually the chaplain is my first go to.” Chaplains aren’t only for problems, however. SFC Matt Baumgarn had a military chaplain perform his wedding rather than his own pastor. 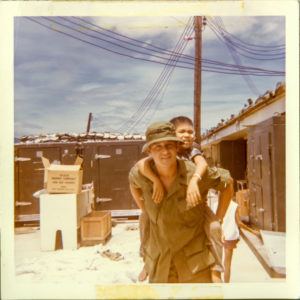 When Rev. Hisel arrived in Vietnam in 1971, he had two weeks of training: e.g., how to relate to locals and how to spot booby traps (like a Coke can connected to a bomb). Ministering to the infantry meant he was in the field most of the time at a mountaintop firebase, where his living quarters were underground. Every day, he said, “I would talk with the commanders, often in an underground bunker, to get suggestions on where to go to help troops,” which often meant where the commander thought morale needed attention. He had to be airlifted to where the troops were. “Everything was done fast,” he said. “The helicopters never landed. They hovered and you jumped on and off.”

Fr. Holzhauser deployed twice in wartime, to Iraq in 1990-1991 and Afghanistan in 2004-2005 (as well as to Europe and Latin America in peacetime). To minister to far-flung troops, he traveled by helicopter and convoy. “The South Dakota people were surprised how much I was away from them because I had services to do in multiple places,” he said. In Afghanistan, he served 28 bases. “By the time you got to all of them, a month went by.”

While Fr. Holzhauser didn’t see female chaplains during his first deployment, there were some the second time. In fact, Rev. Reeb was in Iraq with the Marines at about that time. She served two tours there, in 2004-2005 and in 2007-2008. The first time, she was in Fallujah during some of the heaviest fighting there. During her second tour, in Al Asaid at a calmer time and in a calmer place, she worked with troops to distribute soccer balls sent from a California church to the youth in the area. 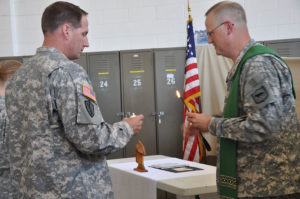 Fr. Griffin (at right) served as a military chaplain from 2009-2017 with the National Guard.

When Fr. Griffin deployed to Afghanistan in 2013, his commander expected that when a convoy left the base, the soldiers would see him praying for them. During the soldiers’ final vehicle checks, “I’d lay hands on a vehicle to bless it. The guys would look around at me and ask, ‘What are you doing, sir?’ because they didn’t like people touching their vehicles.” After blessing everything, he’d be at the gate kneeling in prayer as they drove away, “The last thing they saw as they left the base.”

Mike Herman, who graduated from Central with Fr. Griffin, served in the military for 30 years, including 15 months in Afghanistan. “Chaplains are critical during deployment,” he said, helping with mental health issues, especially young soldiers who were away from home for the first time. “They need someone to talk to.” Fr. Griffin agreed, “Deployments aren’t easy. Lots of emotional stuff and grinding routine.” He added, “Plus everything is brown! One day I took a picture of a cloud because it was the first one I’d seen in a month and a half.”

When she attended services overseas during her deployment to Kuwait and Iraq in 2003-2004, Sarah Bierman found “Going into the tents for services was like a piece of home. You stepped out of combat and got a sense of peace. You get wrapped up in a deployment. It’s nice to have a reminder of your spirituality and who you are as a human being, not just a soldier—as one of God’s children.” It wasn’t always peaceful. Paula Beckler, who deployed with Sarah, said her best friend was attending services in Baghdad’s Green Zone when the building was bombed. “To this day,” Paula said, “she can’t worship inside a building.” 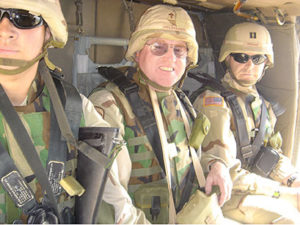 Fr. Joe Holzhauser (at left) was deployed twice during wartime as a military chaplain. He served in the National Guard for 26 years.

“Holidays can be very lonely when you’re deployed,” Mike Herman said, but the chaplains helped. Rev. Hisel did 11 field services on Christmas in Vietnam. “I had a helicopter assigned to me,” he recalled. “We hopped from one place to another to be with the troops on Christmas Day.” During Christmas midnight mass at Bagram Air Base, Fr. Holzhauser remembered, “There were 1,500-2,000 soldiers at the service, and we sang ‘Silent Night.’ We started in English and then had all the international troops sing it in their own language. The melody is the same, even if the words are different. It was very moving.”

Both of Rev. Reeb’s tours kept her away from home for the holidays. “My husband left the tree up at home, and we celebrated Christmas in March!” she said, noting how important family support is. “They truly served too.”

“Death was a kind of constant thing,” Rev. Hisel noted. “Going by Graves Registration, which was basically the base mortuary, with stacks of caskets outside waiting to be used, was foreboding and depressing to me.” He added, “When soldiers were killed, I did memorial services. We set up a memorial area with the soldier’s stuff—tarp, boots, and so on.” Four decades later, Mike Herman experienced similar memorials when four soldiers were killed in action on his first day at camp.

Soldiers’ deaths aren’t just overseas issues. Stateside, Fr. Holzhauser said, “You’re on call for deaths. A chaplain is assigned to go with an officer to notify the family.” Once he had to notify a family about the death of a son he had helped prepare for confirmation years earlier.

Although these chaplains have left the military, the military hasn’t left them. While she retired in 2012 and her home base is now near Peever, Rev. Reeb is a junior ROTC instructor at a New York high school— “still in uniform every day.” Rev. Hisel organized a support group for veterans, hosts an annual Veterans Day appreciation meal, and recently received the Veterans Advocate award from the Aberdeen Chamber. Paula Beckler says that even after they retired, both Fr. Holzhauser and Fr. Griffin readily agreed to visit with soldiers who needed a friendly ear.

In “bringing God to soldiers and soldiers to God,” these Aberdeen chaplains answered a calling they heard in various ways. Besides the good they did for service members, they all would agree with Fr. Holzhauser’s assessment, “It’s a big part of my life. I’m very lucky.” //–Patrick Gallagher

Just a Boy and His Moose →