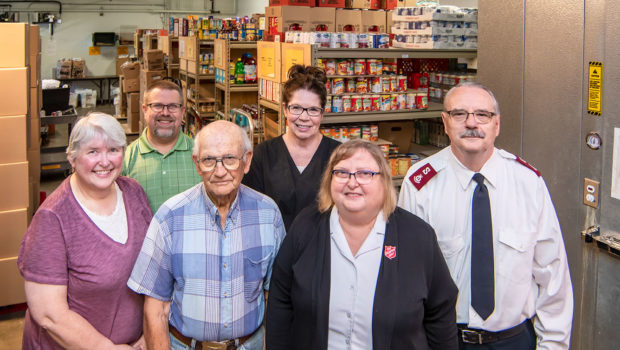 The Salvation Army is a primary source of assistance in our community, thanks to the hundreds of volunteers who pitch in during the holidays and beyond.

Like many people, I imagine, most of my encounters with the Salvation Army have been with people ringing bells at stores at Christmas time to solicit donations for the Corps’ services for people in need. Fairly recently, I learned of the assistance my grandfather received during and after his service in World War I. Not long enough later, after he died at age 46, my grandmother and her young children, including my mom and one born after his death, also received aid from the Army. As is often the case, we don’t always know who is in need.

The Salvation Army is, certainly, one of the primary sources of assistance in Aberdeen. From the tens of thousands of meals it serves in its dining room or delivers, to personal visits to hundreds of nursing home residents, to thousands of gifts shared with children, the Salvation Army puts a personal face on addressing need.

Founded in England in 1865 and now in more than 100 countries, the Army first came to Aberdeen in 1892. For more than 70 years, it was located downtown on Fourth Avenue, behind today’s Brass Kettle. That building was demolished in 1984, and the Army built and moved into its current building on Sixth Avenue and 10th Street in 1985. The thrift store was built in 2005.

Major Dale Hunt, with his wife Mary, has directed the Aberdeen Corps since 2016, but his story goes back much further. “I attended the Army all my life, since I was probably a week old,” he says. “My mother belonged, and she always made sure we went to the programs.” Originally from Bismarck, Major Hunt was the Corps Officer at locations in Indiana, Kansas, Wisconsin, and Illinois as well as in Minneapolis and Grand Forks. His 17-member staff in Aberdeen includes administrators, janitorial staff, food preparers, and thrift Store workers. 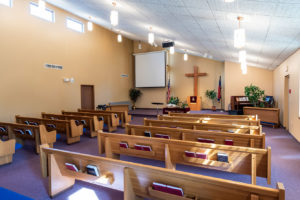 People do not need to subscribe to the Army’s religious beliefs to receive assistance but are welcome to attend their Sunday Christian services, youth groups, and women’s groups.

In describing the services the Aberdeen Corps provides, the Major is sure to add, “We are also a church”—and he is also quick to point out that people do not need to subscribe to the Army’s religious beliefs to receive assistance. In addition to youth groups, women’s groups, and other spiritual services, they offer Sunday Christian services. About 30-50 people attend weekly, and one of the people there will be Sue Grewe, the operations manager at the Aberdeen Corps, who has worked there for more than 30 years. Her family owned Taylor Laundry, which was located next to the old Salvation Army building downtown. “My mom and grandma would shop in the thrift store, and from the invitation of the salesclerk, Doris Hunter, our family came to the church services. We have been attending since then,” she says, adding, “I grew up going to Sunday school, Sunday morning and evening services, youth group, and anything else that was happening at the Corps.”

As this suggests, youth activities have been a key service for the Salvation Army for many years. In Sue’s younger days, “Our youth group had approximately 15-20 kids, and we had approximately 20 people in our brass band. The band was made up of youth and adults. We would play during the church services and at open-air services (street corner ministry), at annual banquets, and wherever else we were needed.”

Times have changed for youth, of course, and other opportunities have proliferated. The Aberdeen Army’s band and youth group don’t exist anymore, but the Corps offers an after- school program for elementary students. In addition, the Corps provides hundreds of lunches to kids at Aberdeen parks, school supplies, and gifts at Christmas.

At Christmas, the Army assists 300 families with a gift package containing a Christmas Day dinner. The food is donated by individuals as well as local stores. The Christmas packages also include toys donated for children at special Christmas trees in town and Toys for Tots—“So they have something to open on Christmas,” Major Hunt says.

In addition, staff members work with hundreds of people a year, offering direct help for food, rent, and utilities vouchers, as well as help with clothing and furniture through the thrift store. While these services are meant to help prevent homelessness, for people who are homeless, the Army coordinates with the Journey Home shelter.

The Army’s work, the staff is quick to point out, relies on volunteers. “I really like doing it. I like helping people,” says Mona Greenhalgh, who was ringing bells in Oklahoma before she moved to Aberdeen and continued to help the Army. 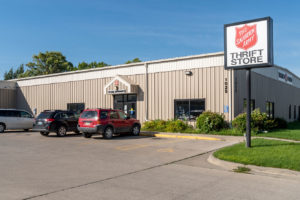 Volunteers do many jobs to help, receiving and stocking goods at the thrift store, working in the kitchen, serving food, helping with Christmas activities, and visiting people. Major Hunt says they have 450-600 volunteers. In fiscal year 2018 (ending September 30), volunteers put in 14,388 hours, almost 1,200 per month—600 days in a year. As of July 2019, volunteers were working at a 1,500 hour per month rate. That must be partly due to Tony Jones, who became volunteer director in July 2018. It was a return for him. A Missouri native, he had worked for the Army in Aberdeen for several years in the early 2000s before he went overseas to do mission work. No doubt he’s a good model for his volunteers.

Another volunteer, Robert Webb, has supported the Salvation Army for more than 40 years, since before he joined the board of advisors in 1976. Besides ringing bells, he’s driven the mobile canteen to provide refreshments to firefighters in the Aberdeen area and in the Black Hills, and he also drove it around Aberdeen in 2007 to help people dealing with the aftereffects of that year’s flood. He helped expand the Snack Packs program, which provides weekend snacks for 425 area school kids. “We were doing four schools originally, and now we do nine in town and four in nearby communities,” he notes. Retired from the former Webb Shoes, he keeps volunteering. A highlight for him is “the thank you notes from students at Lincoln and other schools for the snack packs. It makes you know you’re reaching the right people. You hope that down the road they’ll remember it came from the Salvation Army, and they’ll pitch in.”

The Major says some volunteers tell them they were helped by the Army at some point in their lives, and now it’s time to give back, but “Most don’t say that, so they probably are just volunteering.” He stresses, “There’s still more need and more need for help. We still need more volunteer help.” Plus, as Robert Webb adds, “You do get to see some of the good you’re able to do.” Tony is the guy to contact to volunteer.

“I enjoy it,” says Mona, who does many volunteer jobs at the Corps, coming five days a week and starting each day by making coffee because “I think people should have that at the beginning of the day.” After which, she adds, “Then either the Major or Tony come and get me, saying ‘we need extra help’ somewhere,” she laughs. “And I say, ‘Oh, okay.’” She adds that her husband joined her in volunteering and often signs her up to ring bells at Walmart, which, at the end of town without much to block the December north wind, can be a hazardous duty. Fortunately, when she first moved from warmer Oklahoma, the Corps “gave me some winter clothes so I could ring bells there.”

Bell ringing is universal for the Salvation Army in America. It started in San Francisco in 1891 and spread across the country. In Aberdeen, volunteers from more than 40 local clubs and organizations ring bells, starting the Friday before Thanksgiving and finishing on Christmas Eve.

The job is pretty self-explanatory—someone stands by a kettle and rings a bell to attract donations—but there used to be some, well, whistles with the bells. When she was young, Sue Grewe says, “We used to have little houses for bell ringing. We used them downtown, and they had little heaters inside. Because we had two of us at the house during our time, we would trade off to warm up; but sometimes the little house became too warm to a kid!”

Bell ringing is more than just an iconic Salvation Army thing. “Christmas is very important to us,” Major Hunt says, adding starkly, “If we don’t reach our goal at Christmas, we don’t make it all year.” And it’s getting harder. Some Army Corps around the country have noticed a decline in giving in kettles at stores as people do more online shopping. In addition, ringing locations are declining. Last year, I rang my bell at Shopko, which, like other previous spots such as K-Mart, no longer exists. But the ringers will be out there again this year.

The Salvation Army is one of the best (although, certainly, not the only) ways to make a difference for people in need in Aberdeen. It does a lot. As Robert Webb says, “It’s more than bell ringing. It’s helping the community be more than a step ahead. We can’t cure every ill, but we can help put a smile on someone’s face.”

It’s more than bell ringing, but that’s an introduction. Drop something in the kettle. You’ll make a difference, and besides, the person you help could be your neighbor or the ancestor of someone you’ll love someday. // –Patrick Gallagher

It Takes a Team in South Dakota Sports →