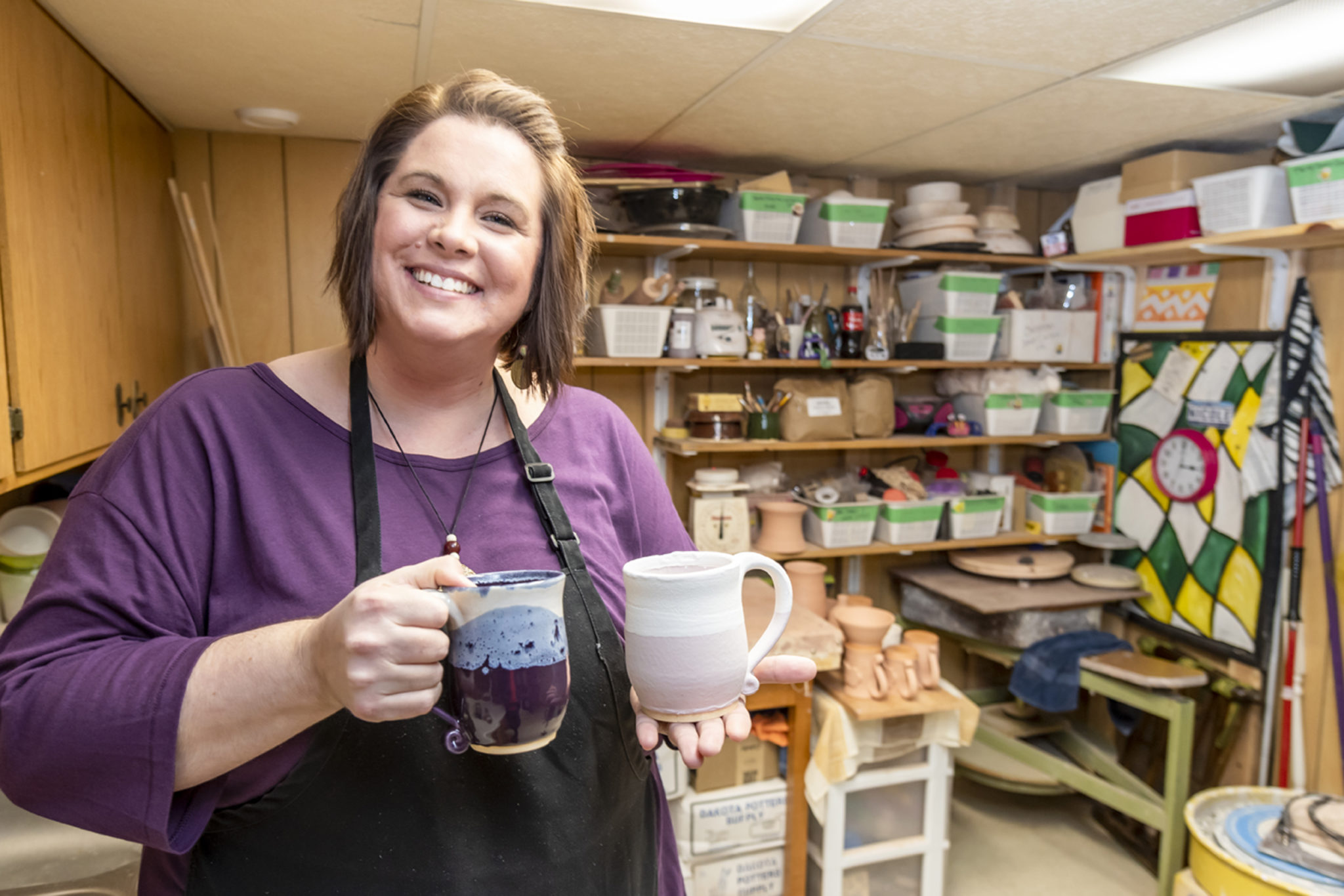 Potter Nicole Volk is accomplishing something most adults never actually get around to doing. She is living out one of her childhood dreams and loving it every minute.

Growing up in Lake Preston, Nicole Volk wanted to learn how to make pottery. An unusual dream, perhaps, for an elementary student living in a rural South Dakota town whose population just barely squeaks above 500. But when Nicole was a kid, nearby Arlington, South Dakota, (population about 850) was home to a pottery studio called Arlington Pottery. Every summer, they chose one high school apprentice to help with shop duties, and more importantly, to learn the art form firsthand. Nicole bided her time until she was old enough to apply for the apprenticeship, but sadly, the shop closed before she made it to high school. Still, the dream of learning pottery didn’t quit. And when she moved to Aberdeen to study music education at Northern, she kept it in her future plans. “It was still something I had in the back of my mind that I wanted to do, so I thought maybe if I teach during the school year, then I could still have time in the summer months to learn pottery or do art shows,” she says.

When her sophomore year at NSU rolled around, Nicole decided if she didn’t take a pottery class now, it might never happen. So she made the leap and signed up for a semester. Was finally getting to learn pottery worth the long wait? “I absolutely fell in love with it,” she says. “I ended up taking four semesters of pottery and graduating with an art minor.” She credits her professor at NSU, Mark Shekore, for furthering her love of the craft even more. “I learned so much from him, and we have very similar styles. I think when you study under someone, you naturally pick up some of their isms too.” She adds that Professor Shekore was influenced by one of her favorite potters of all time, the famous Simon Leach, and they both inspire the rustic, functional pieces she creates at the wheel today.

After graduation, Nicole became busy with a full-time job and a family, which didn’t leave a lot of time for crafting pottery. Later on, when she was ready to get back into the swing of making things, she found a kick wheel at a surplus auction in Aberdeen. Using a kick wheel, a potter literally propels a heavy stone or concrete base with their foot, spinning it manually while also using their hands to shape the clay. Nicole has since transitioned to an electric wheel but is glad to have first learned using a kick. She laughs, “If you can throw a pot while keeping your legs moving, using an electric wheel seems that much easier.”

Nicole didn’t immediately start taking custom orders or attending art shows after she picked up pottery again, but instead took her time relearning the skill. Now, it’s been about three years since she launched her part-time pottery business. She still works full time, as an academic advisor for online nursing students at Presentation College, and mostly sits down at her wheel in the evenings after her daughters, Jada (10) and Maci (4), are asleep for the night. “My daughters are a bit older now, and they love to throw pots with me and have some of their own pieces they’ve made on the wheel too. I’m excited to see where they go with it,” she says.

Everything Nicole makes is functional art. Mugs are her favorite. “There’s something about drinking coffee out of a mug that someone hand-formed. You can see the fingerprints that go into it sometimes where the throwing lines are, and you know somebody specifically made that, instead of it being poured out of a mold,” she says. Also growing in popularity is her clay jewelry, including earrings and bracelet pendants. “Even though they’re made out of clay, they’re very, very light. It’s fun to combine them with different colors and beads,” she says. For her, it’s important to make art that people can use as well as enjoy. When she and her husband Nick were first married, they lived in a 600-square-foot home, so everything in it, even the art, had to have some kind of functionality. She says, “I think a lot of people can relate to that. They love art, but they don’t have space for big sculptures or for big paintings on their walls. But they do have room for it on the coffee cup they take to work every day.”

Nicole creates custom orders for her clients as well as travels to a few art shows every year with her work. What do most people say when they see her at the pottery wheel? “‘Can you teach me?’ That’s the number one comment I hear,” she laughs. So maybe the dream of being a potter in rural South Dakota isn’t so far-fetched, but she admits having an art career in a small town does pose its own challenges. It’s not as easy to get your name out there, and often you have to drive long distances to meet customers or attend shows. On the other hand, she adds there is plenty of support here from artists who have made it work before, along with online pottery groups where members share their tricks and techniques. While learning from others, she has also become an artist to learn from, and proof that no matter where you live or how little time you have, you can craft your own creative life. //— Jenny Roth