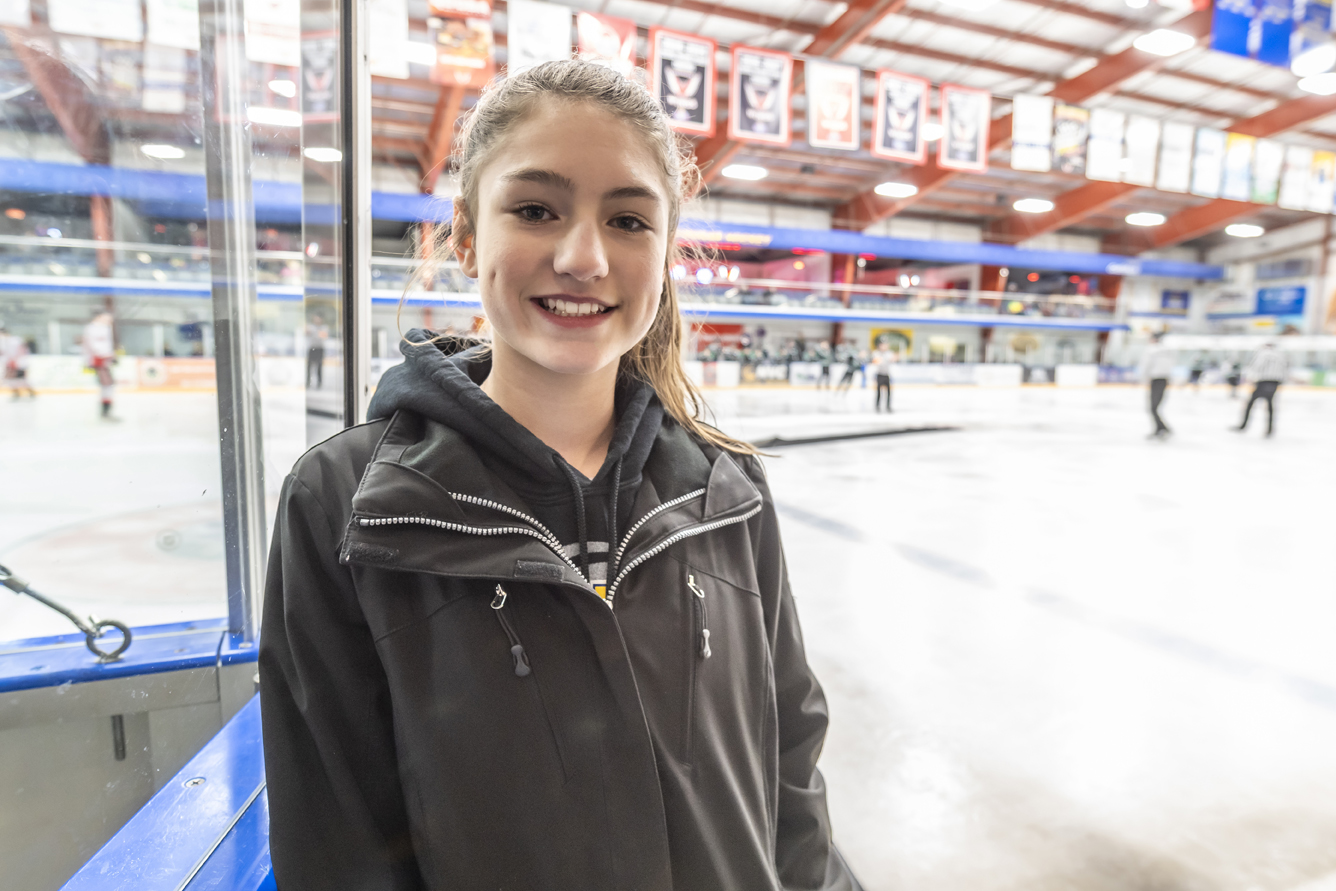 If you’ve been to any athletic event in Aberdeen, there’s a good chance you’ll recognize National Anthem singer Ella Huettl.

Ella Huettl feels at home when she is on stage. At only 12 years old, she has already been singing the National Anthem at various events in Aberdeen and the surrounding area for over three years. And we’re not talking about just singing a handful of times. Her mother, Jennifer Huettl, estimates Ella sings the National Anthem at over 50 different occasions every year. Along with singing, her next love is sports. So it’s not unusual for the seventh-grader to kick off a Wings hockey game or Northern State basketball game by singing the National Anthem, and then head to her own basketball or volleyball match within the same evening. With more than a few performances on her resume, nerves are mostly a thing of the past. “I was a little bit nervous the first couple of times I sang in public, but that part has worn off now,” she says.

Ella’s singing career began when she started memorizing the National Anthem after hearing her older sister perform the song. Then one day, Jennifer says she happened to overhear Ella singing at home and was so impressed that she recorded her and sent the clip to her teacher, who in turn connected Ella with another student who was doing the National Anthem around town. It only snowballed from there. That same year, Ella sang at her first public event, the Lincoln Day Dinner at the Dakota Event Center. Soon after, she got a call from the Wings to sing at one of their home games. To this day, the crowd at the Odde Ice Center is one of her favorites. “I love being in the spotlight on the ice with all the hockey fans there,” she explains.

Her most massive crowd, though, was at a youth state wrestling tournament at the Barnett Center, where she sang the National Anthem in front of 5,000 athletes and their families. She also sings at car and horse races, rodeos, conventions, fundraisers, and the Special Olympics, to name a few places. A country girl at heart, one of her biggest goals is to someday sing in Nashville. She would also like to perform the National Anthem at a Minnesota Twins game in memory of her great-grandfather, who both loved the Twins and hearing her sing. To get there, she takes weekly vocal lessons from musician Ron Parker and is learning to play the guitar. Whether in Nashville or Aberdeen, it’s easy to see that Ella’s talent for music is something she will carry with her for a long time. She says, “What I like most about singing is that you can choose a song based on whatever feelings or emotions you want to express, and then share that with others.” //— Jenny Roth