History
The Decade That Roared
By Patrick Gallagher | January/February 2020 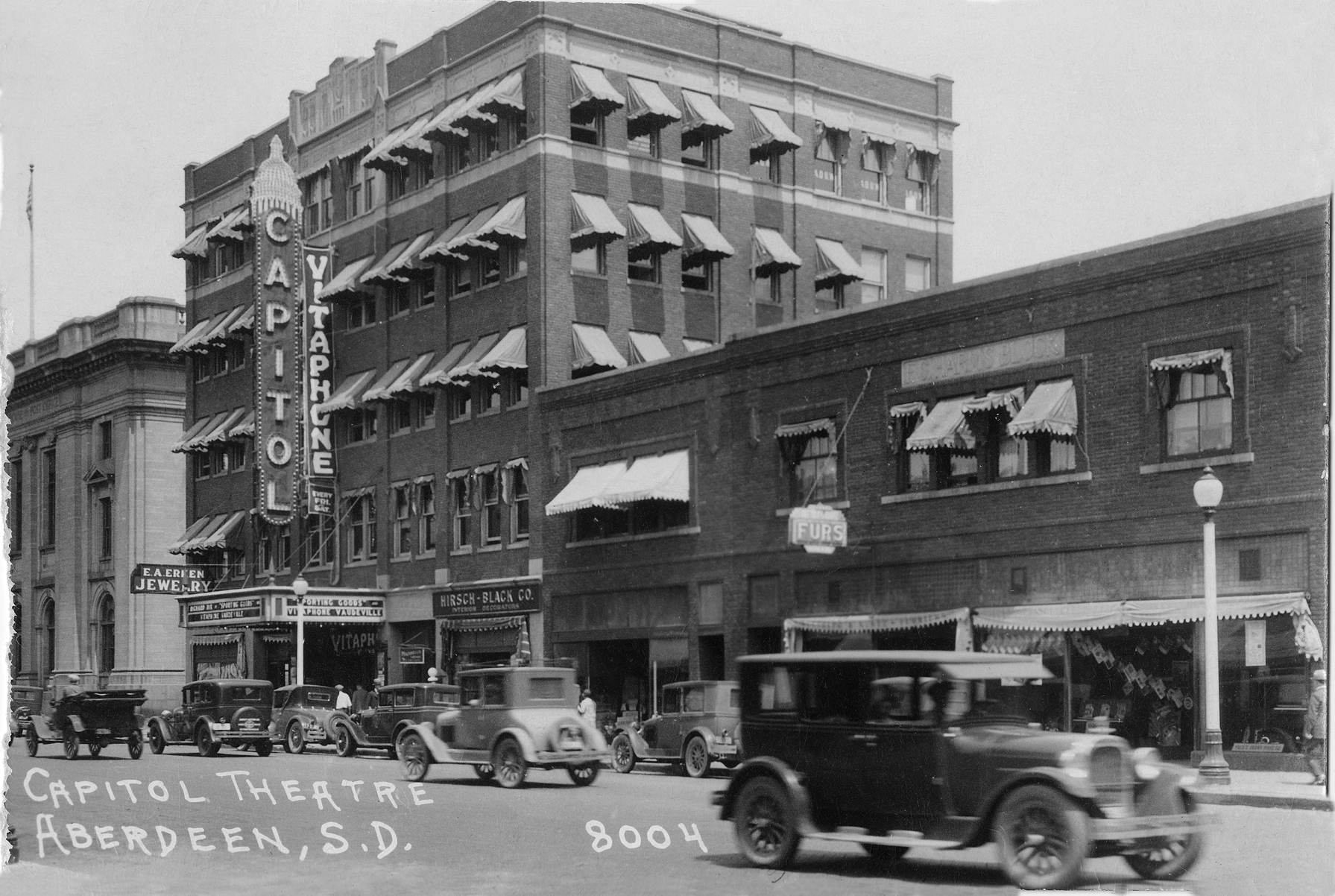 Before we dive headfirst into the 2020s, let’s look at how far we’ve come by taking a glimpse of Aberdeen as it was 100 years ago.

From the vantage point of 100 years, the 1920s were often identified by excesses. The Roaring 20s, as the period has often been called, roared perhaps because of pent-up energies from the experience of World War I. Socially and culturally, in economics, technology, and other dimensions, life changed radically. Even Aberdeen saw significant changes ten decades ago.

To be sure, many changes had been developing over time. Prohibition of alcoholic beverages had appeared sporadically in American states before becoming the law of the land. Cars, radio, movies, and other evolving technologies took off during the 1920s as they became broadly available for mass consumption. Art, architecture, music, dance, and fashion changed too, lending another name to the times, the Jazz Age, because of the growing popularity and influence of jazz music. Newly able to vote, women, probably particularly younger women, asserted more autonomy and expressed it in attire, dance, and attitude, making the “flapper” an icon of the age. Before the ratification of the 19th Amendment in 1920, women’s suffrage had gradually become legal in several states, including South Dakota.

Perhaps as another response to the war, American politics shifted inward. Ohio Republican Warren Harding, elected President in 1920, ran on a “return to normalcy” after the war years. After he died in office, major scandals within his administration emerged. Nevertheless, his Vice President Calvin Coolidge was elected in his own right in 1924. Coolidge signed the Immigration Act of 1924, which radically cut back the relatively open borders that had preceded the years just before WWI. The Indian Citizenship Act of 1924 broadly made all Native Americans U.S. citizens. The government enacted protectionist economic measures meant to support American industry. Coolidge was succeeded by a third consecutive Republican, Herbert Hoover, in 1928, who would endure the Stock Market Crash in October 1929 and the onset of the Great Depression as the decade ended.

Politically, Aberdeen and Brown County didn’t stray far from the Republican dominance of the state. After flirtations with Progressivism elected some relatively radical reformers in the 1910s, the state and the Hub City area “returned to normalcy” by the time of President Harding’s ascendance. Later in the 1920s, as Republicans came to be blamed for economic problems, this area was an early elector of Democrats.

Nationally, Prohibition might have had more cultural impact than anything else. The 18th Amendment didn’t become law until 1919, but as in the case of women’s suffrage, South Dakota was ahead of the curve, enacting Prohibition in a 1916 statewide vote. Brown County voted for Prohibition, but Aberdeen was the only city with a population of over 1,500 to vote “wet”—perhaps because the city was already pursuing local option prohibition. Between 1913 and 1915, more than 30 bars in Aberdeen closed, leaving zero. Over the next 18 years, Aberdeen had its share of arrests for illegal brewing and distilling, beer gardens, and “disorderly” houses, as well as drunkenness. In November 1934, after the Federal repeal of Prohibition in 1933, another statewide vote overturned South Dakota’s dry laws. Sales of hard liquor became legal again, and the first license in the state was issued to an Aberdonian.

Economic conditions compounded the deprivations of Prohibition. The agricultural Midwest heard a different roar well before the Great Depression’s “official” beginning at the end of the decade. High international demand and good prices had produced a boom time for farmers during WWI, and many borrowed money for land and equipment purchases. Unfortunately, the wartime bubble burst when European agricultural production returned to normal and demand for American products dropped. A recession followed, agricultural prices fell, and farmers suffered. Proving that history rhymes, farmers felt that the tariffs meant to protect American products ended up harming them.

To be sure, the decade had up and often frivolous years. It’s only just to quote the late Aberdeen historian Don Artz’s The Town in the Frog Pond, a delightful history of Aberdeen’s downtown. As he pithily summarizes, “In 1925 the United States was in a period of prosperity, progress, mobility, dreams and romance. Almost every day, the front page of the Aberdeen Evening News featured a shapely and talented beauty queen, a glamorous and much-married movie star, a flamboyant and promiscuous heiress, a ravishing and mysterious aristocrat, a winsome and plucky aviatrix, or some combination of these nouns and adjectives, often linked with delicious scandal.” Still, even among good gossip, the writing was on the wall.

During the 1920s, wages rose slightly nationally, although in another rhyme, the wealthier a person was, the greater the income increased. Per capita income for farmers was about a third of the national average. In South Dakota, farm foreclosures reached a high in 1924-25, and between 1921 and 1930, farmland lost 50% of value. The pain spread into towns, and businesses suffered and banks failed. In Aberdeen, retail sales reached $13.8 million in 1929 and dropped by more than one-third to $8.6 million in 1935.

Well before the infamous bank runs of the Great Depression, upwards of 200 banks closed in South Dakota. In Aberdeen, bank clearings reached about $78 million in 1925 but by 1933 had dropped 70% to $23 million. A 1929 Year Book put out by the Aberdeen American Legion asserted that despite “a general depression through the agricultural states,” “Aberdeen has the strongest group of banks in the Dakotas.” It noted over $8 million in deposits in 1928. A report from 1925, however, had shown deposits at $2 million higher, and by 1931, only two of the banks in the 1925 report were still operating. Notoriously, the Brown Brothers bank opened on Main Street in 1927 and was quickly bankrupted. A few years later, someone blew up the monument at the Brown family burial plot in the city cemetery.

Before all that, downtown Aberdeen roared with businesses. In the 1928-29 Aberdeen City Directory, Don Artz counted more than 60 businesses in just the block of Main Street between First and Second Avenues. During the decade, the Alonzo Ward Hotel was rebuilt after a fire, and the Capitol Theatre opened. St. Luke’s Hospital also opened a new building. Some nationally known businesses came to town too, including J.C. Penney’s and Sears, Roebuck and Co. Woolworth’s opened in 1926 with a feature new to the area: a luncheonette. While common in the store’s locations in larger cities, Aberdeen’s was apparently the first in the Dakotas.

Railroads were still dominant in the Hub City in the 1920s. Some 700 people—equal to about one in every six adult men in Aberdeen, worked for the four railroads operating here. Like, well, spokes coming out of a wheel’s hub, nine lines came through Aberdeen. In addition to freight trains, 22 passenger trains served the city daily. On the other hand, a trolley system in town shut down in 1922 after operating since 1910.

In a sign of times to come, the automobile became more affordable and widely available. In 1928, there were nearly 8,000 vehicles in Brown County, about one car for every other adult. By 1919, some 50 auto-related businesses operated in town, including on Main Street. The store that became Malchow’s once had a turntable and elevator for displaying cars. In 1929, 30% of retail business in Aberdeen was car-related. This was despite the fact that roads in town were starting to crumble. A 1907 surfacing project paved many streets with 1.6 million wooden blocks, which began to crack after heavy rains in the 1920s. People compared streets to the Badlands. In 1934 the city began to resurface streets with concrete.

In 1928, the city dedicated the Tri-State Fairgrounds Airport, the first municipal airport of its kind in the state. Operating only a couple years before the city purchased land for the site of the current airport in 1930, it attracted barnstorming pilots racing cross-country.

In housing, the decade kicked off with a boom in home construction—312 homes in 1920—but that was the last good year in the decade, as later construction focused on business—1928 saw only 56 new homes. The decline may not be surprising: the roaring year of 1920 followed a decade with a population growth of about 4,000 people, while the 1920s only added half that many.

In education, the Aberdeen Public Schools added much needed space, building Roosevelt Junior High, Simmons Middle School, and Washington Elementary. A 1926 report showed that (before Simmons was built) the total enrollment of 3,159 students was about 200 above capacity.

The city’s one college at the time saw swings and milestones. The Memorial Archway went up in 1920 at the north entrance of the then Northern Normal and Industrial School. Although the governor vetoed a legislative name change to Northern State Teachers College in 1924, Northern started to adopt the new name anyway. Enrollment fluctuated significantly. From about 600 students in 1920, it increased more than 50% to 947 in 1925—the highest until the 1950s—then dropped to around 800 at the end of the decade. Tuition more than tripled in the 1920s—from $20 for a full year in 1922-23 to $70 in 1930-31. Another landmark occurred in 1923 when, after no student responded to the president’s offer of a dollar to name the team, the men’s basketball team chose “Wolves” as their mascot.

Several dance halls in Aberdeen and around the county, including a couple upstairs on Main Street, offered music and entertainment. The downtown also hosted six movie theaters, which might have shown 500 movies in a year, as well as theatrical productions.

Aberdeen’s high school track team won the state title in 1927 and was the runner-up in 1924. NSU’s men’s basketball team won their conference title in 1924 and played their first game in the new Spafford Hall gym in 1925. Amateur baseball, trapshooting, and tennis, among other sports, took off. After a few failed attempts, the YMCA opened in Aberdeen in 1926. The M meant something: it was only for men and boys, except on Tuesdays when women and girls could exercise there.

Aberdeen offered about 20 churches in the 1920s. In addition, many civic organizations offered citizens a variety of opportunities for getting involved and for what would come to be called networking about 60 years later. To stay informed, the community offered three daily newspapers, a weekly, and other regular publications.

That 1929 American Legion Year Book offered a cogent assessment: “Business conditions were registered as normal or to about 5% above, again demonstrating that our community has become so firmly built up that temporary conditions cause no particular fluctuation in business conditions one way or the other.” A similar attitude that national circumstances don’t have much effect here—we never get too high or fall too low—seems to prevail today, one that somehow balances humility and pride. Within a few years of 1929, however, after thrashings by the economy and Mother Nature, South Dakota would have the highest proportion of people eligible for relief in the nation. Entering the 2020s, one wishes roaring economic debacles would be a decade behind, not ahead.

Though history may want to rhyme, let us hope it won’t this time. // — Patrick Gallagher