People
Two Hours to Feed Four Thousand
If you've ever wondered how your family can make a big difference in the world, look no further than Kids Against Hunger Aberdeen.
By Jenny Roth | January/February 2020 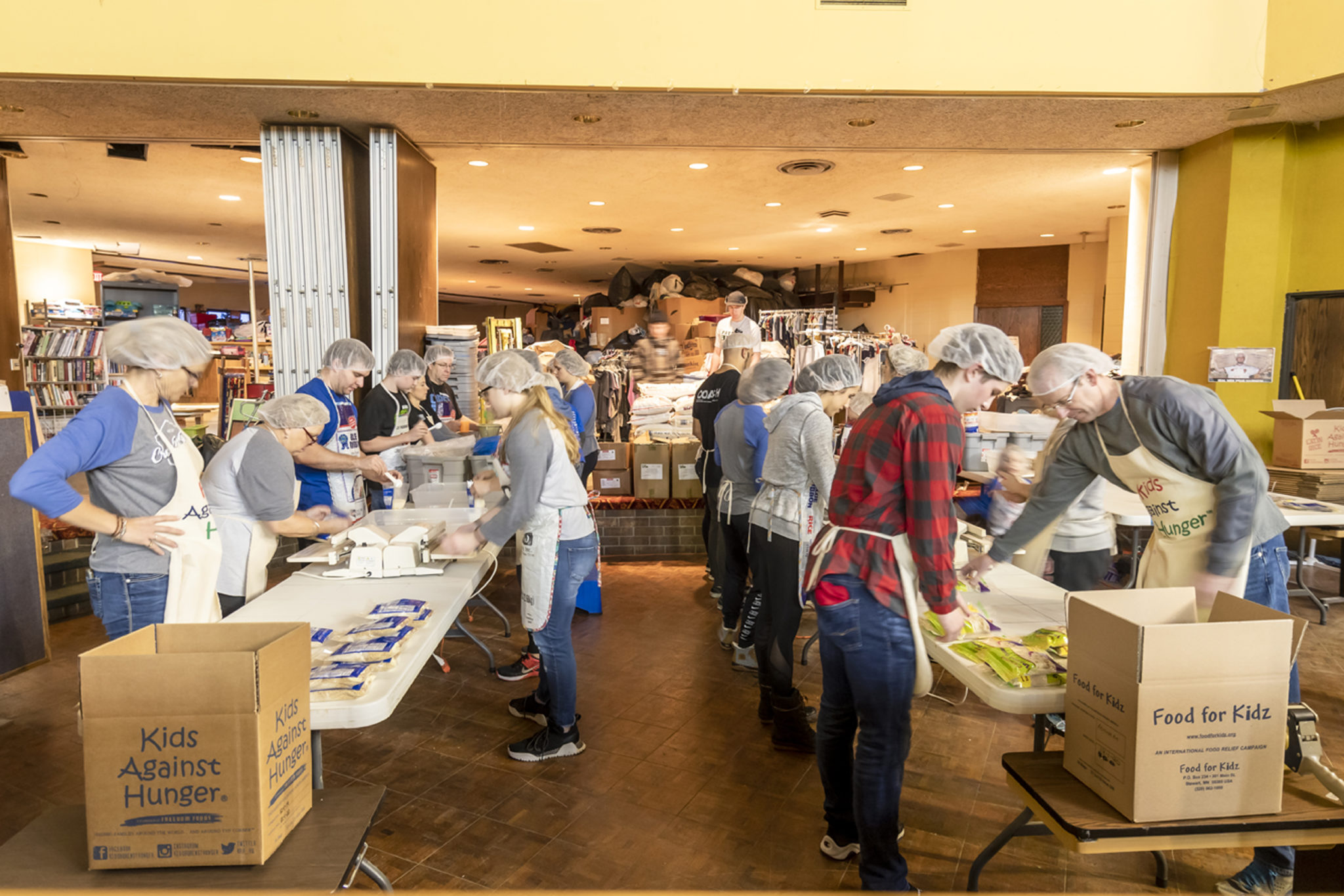 It’s a Tuesday afternoon at Kids Against Hunger Aberdeen and Phyllis stops sorting merchandise for only a beat, just long enough to glance at her step counter before she keeps on moving. “You won’t find too many people who enjoy their job as much as I enjoy this one. Every day is different and there’s always something to do,” she says. Nearby, Tony organizes a recent donation, while Jackie hangs clothes on racks according to size. At the cash register, Carol helps a family purchase items for their home. All the while, shoppers mill about, browsing through used clothes, glassware, furniture, toys, electronics, and books.

Phyllis, Tony, Jackie, and Carol, along with LeaAnn, Sylvia, Sherri, and Kary, are working to keep Kids Against Hunger Aberdeen’s doors open. The nonprofit was born out of a vital but often uphill mission: to feed the most impoverished and hungry children in the world. Richard Proudfit, a Minnesota native and the founder of Cardinal Tool, started Kids Against Hunger as well as another nonprofit called Feed My Starving Children. Together, both organizations have provided billions of meals to children and families. Sadly, Richard passed away in 2018, but not before getting Kids Against Hunger sites up and running all over the U.S. and Canada. The Aberdeen location upholds Proudfit’s tireless spirit and effort to do good. Sherri and LeaAnn will drive by the store multiple times every evening to make sure any donations left outside get moved in. If a group wants to package food even on a day they are closed, they’ll make it happen. And families who come to the thrift store not to shop, but for assistance, are never turned away.

At Kids Against Hunger Aberdeen, volunteer groups can sign up for two-hour shifts spent packaging vitamin-rich soy rice meals that can be prepared anywhere by just adding boiling water. Then, the meals are shipped to wherever there is the most need. Each group also donates or raises money to cover the cost of the food. Churches, 4-H clubs, and families are just some examples of those who have packaged food in Aberdeen so far. While most meals used to be sent overseas—to countries like Haiti, Honduras, and Guatemala, now almost all are given to local churches and families. South Dakota’s Convoy of Hope charity will pick up meals and deliver them around the state at no charge to Kids Against Hunger.

After running successfully for the first couple of years, Aberdeen’s food packaging center faced a decline in numbers and a possible closure. That’s when employees and volunteers started brainstorming ways to keep it open. They hosted rummage sales, became a rummage sale drop-off site, and eventually evolved into a fully-stocked thrift store. It is now the only Kids Against Hunger location with a thrift store and it serves its primary purpose: to keep the food packaging center going.

Kids Against Hunger Aberdeen wants people to know they are open. Tucked behind the Village Bowl, directly west of the Lee Park Golf Course in the former Elks Building, they often get overlooked by passing traffic. Their thrift store welcomes shoppers and donated items Tuesdays, Wednesdays, Thursdays, and Saturdays from 10:00 AM to 5:00 PM, and if you have a group interested in packaging food, just give them a call at 605-262-4444 to set up a time. Sherri says for the future of Kids Against Hunger, they’d like to see more young people involved. That has been the goal all along, to give kids a place where they can help other kids. “All ages can do the food packaging. Sometimes the fundraising part of it can scare people away, but even if every person who packages donates just $25, that is all it costs for us to order the food. And in just two hours, a group of eleven can put together over 4,000 meals. It’s an amazing thing to teach your children and it gives them that sense of being a part of something bigger and being able to help others,” she says. //— Jenny Roth