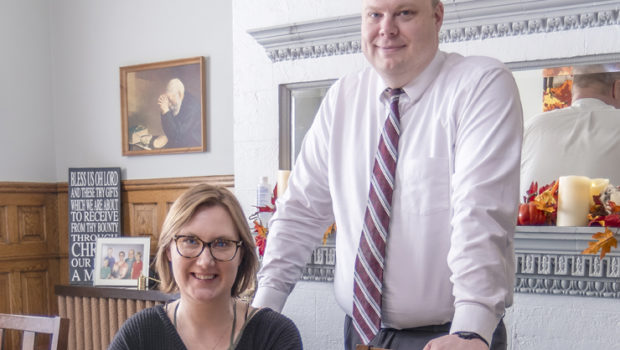 The letter, written in German and dated September 14, 1947, was penned by Alfred Jenisch and addressed to Julius and Carrie Huebl, formerly of 1004 South Jay Street Aberdeen. It records Alfred’s joy and sincere thanks upon receiving a care package from the Huebls, complete with a shirt, suit, and shoes, and also recounts the lingering shadows of war. He writes: 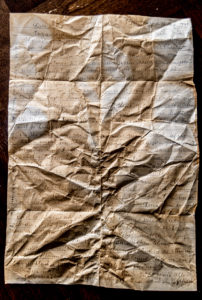 This close-up shows the letter Alfred Jenisch penned in German to his aunt and uncle, Julius and Carrie Huebl of Aberdeen.

“I was released from internment in an American prisoner-of-war camp and came here to Bavaria and have entered into the services of a farmer. It was a tough start some two years ago with the disappointing thought in my heart that I may never see my homeland again. Today we aren’t giving up hope and this is our sole comfort that we still possess. My brother went missing in the siege of Budapest (after Christmas 1944 to 1945) and we have not gotten any signs of life from him. If he still counts among the living, then he has been imprisoned by the Russians. God will ordain whether we are ever to see him again or not. My father, and my sister, as well as my father’s sister, are quartered on an estate in Mecklenburg, in the Russian occupation zone, where they live off of rations, as under the current circumstances settling permanently there is too difficult.”

It’s a stroke of luck, or perhaps bad luck, that we are able to read Alfred’s almost 75-year-old letter to his great-aunt and uncle. About a year ago, Justin and Katie Scott, the current owners of 1004 South Jay, were forced to replace the flooring in their kitchen due to water damage. It was here, crumpled between the floor and the foundation, that contractors found Alfred’s letter and corresponding envelope. A yellowing paper written in a foreign language could easily have been thrown away, but that was out of the question for Katie. The lifelong Aberdeen resident, and self-admitted Aberdeen history buff, connected with the American News to share the discovery. She also made a profile to find out more about the Huebls on ancestory.com and connected with Ginny Lewis, professor of German at NSU, who translated Alfred’s letter into English.

The Scotts and their four children have lived in their home since 2015. A literal dream come true, as Katie grew up nearby and says she had always hoped to live here. According to A Souvenir of Aberdeen The Railroad Hub of the Dakotas, their house was first built in 1904 for Judge A. W. Campbell, one of the area’s earliest circuit court judges. After the Campbells, the home belonged to the Julius and Carrie Huebl family. In his obituary, it states that Julius was born in Vienna, Austria, and emigrated to the United States at 19 years old to join his twin brother and another brother in Minnesota. He later married Carrie (Erdmann) and the two eventually moved to Iowa and then Aberdeen, where they ran the Huebl Funeral Chapel for many years (now the Spitzer-Miller Funeral Home). Dr. Albin Janusz and Aberdeen’s only female mayor, Del Janusz, moved into the residence after the Huebls, where they raised 10 children together until it changed hands to the Scott family.

The letter the Scotts found in the home brings up a lot of questions. For one, how did it get into the floorboards in the first place? By accident? Or by someone placing a time capsule there on purpose? It’s likely the former, as the envelope was presumably repurposed as a grocery list by Carrie Huebl, where a list for things like Kool-aid, butter, coffee, bread, and bacon is written in her hand. Katie says the Janusz family also did remodeling work on the kitchen in the early ’70s. Was the letter missed then? Or perhaps found and kept where it was for another reader to uncover later on? 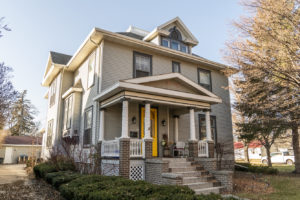 The Scott Family’s home on Jay Street was built in Aberdeen in 1904 and has only had a total of four owners.

Thankfully, with the help of Julius Huebl’s family, the Scotts have also uncovered a lot of answers too. Julius’ great-great-nephew, Larry Moran of Maryland, wrote in an email to Katie that Alfred was the grandson of Julius’ brother Adolf. He says Alfred survived the war and went on to marry in 1954 and have two sons (plus grandchildren). He permanently settled in Mecklenburg, Germany, where he would be in his ’90s (Larry was unsure if Alfred was still alive today). In an email, Larry explained,

“The reason he [Alfred] was interred in a camp after WWII is that he was forcefully removed from Czechoslovakia. It was known as the German Expulsion. After the Russians liberated Czechoslovakia, the Czech partisans rose up and dispossessed the German populace of their land and personal property. Then, the Germans were told to march to the border into Germany or Austria—with literally the shirts on their backs. The camps were really refugee installations and also clearing houses to make sure that no Nazis were trying to slip by undetected. So, when he was free, Alfred needed to rebuild his life and he reached out to the American Huebls for assistance. Cash was not allowed, only foodstuffs and clothing.”

For the Scott family, uncovering Alfred’s story has deepened their love for their old house even more. Katie says, “I always wanted to live in this house, and when it came for sale we knew we wanted to buy it and keep it up. We love living in this neighborhood and living here.” //— Jenny Roth