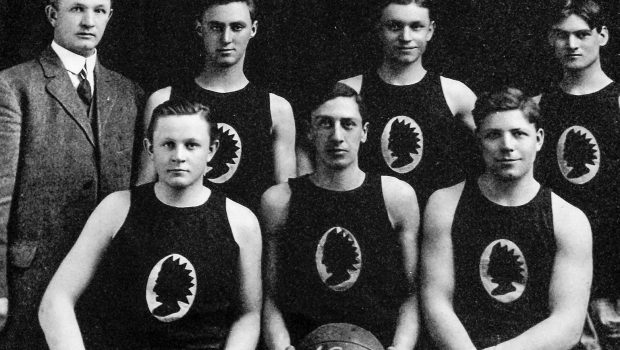 Published on April 30th, 2020 | by AberdeenMagazine

Aberdeen swept the first State basketball tournament, but was 1913 really the tournament’s inaugural year? Redfield Pheasants might beg to differ.

That tournament in Huron, hosted by Huron College, capped off a great season for the Aberdeen team. According to the 1913 Blue and Gold Yearbook, “It was in Basket-Ball this year that the Aberdeen High School made herself famous. The team played fourteen games, winning them all. We met all the best teams in the state and defeated them in nearly all cases by decisive scores.” Decisive was a theme for Aberdeen sports: the baseball team, also coached by C.M. Withrow, beat Ipswich 85-0.

After receiving an invitation to play in the March tournament, Aberdeen scheduled a game in Redfield the day before the tournament started. According to the Aberdeen American News, “The game with Redfield is played to defray part of the expenses of the trip to Huron,” but, the News reported the next day, “Owing to weather only a small crowd turned out to witness the contest.” It was a blowout, with Aberdeen winning 41-10. There was an irony to the game, to which I’ll return, but it’s not the fact that the box score showed a Withrow (the name of the Aberdeen coach) as the game’s referee. Afterward, the Aberdeen team returned to the “Northwestern”—the train—to make the rest of the trip to Huron. 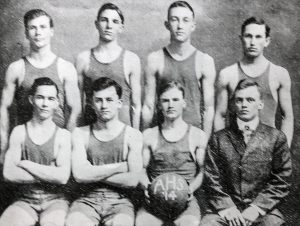 In 1914, the Aberdeen team made it back to the state tournament championship, but ran into Salem, whom it had beaten the year before, and things turns out differently.

In a preview of the tournament, the American News reported, “The best quintets of the state are entered and the state championship will be settled without dispute at this meet. Coach Baker of Huron College reports that sixteen high school fives will participate in the tournament, including the best teams both east and west of the Missouri river.” For traveling fans, the story noted, “The railroads are making rates of a fare and one-third for the round trip.” Another item of interest in the story was that “J.R. Byers of Rapid City, secretary of the state high school athletic association, has received and certified applications…” (the association, as we’ll see, was only involved at a distance).

The 16-team tournament was scheduled for Friday and Saturday—two rounds per day. It began with a theme familiar to modern state tournament fans, as the Aberdeen Daily News reported, “the blizzard of the first day of the high school basketball tournament at Huron prevented some teams from arriving.” The story continued, “the day was a lively one, and the games were attended by large and enthusiastic crowds.” According to the American News, the first round Aberdeen-Arlington game “was the sensation of the day. It was anybody’s game from start to finish. The crowd was wildly uproarious, the band boys got enthusiastic with their instruments, hats and caps were in the air, and the players, catching the spirit, fought desperately.” Aberdeen pulled it out, 26-25.

In these early years of the game when points were hard to come by, Aberdeen’s other games were runaways by comparison, as they defeated Madison 25-19, Salem 35-21, and in the championship, Montrose 21-12. This didn’t prevent the kind of breathless cheerleader reporting that was typical of the era—this time from the American News: “Playing against strong odds and fighting an uphill game all of the way through the annual state high school basketball tournament, with a team of only five men, competing in more games than any other team in the tournament, the Aberdeen High School teams were tonight conceded to be the champions of the state for 1913.”

According to the News, “Coach Baker, who refereed all the games of the tournament, said after the meet that Erbe, Koch, and Bosley, all of Aberdeen, were the three best high school basketball men of the state.” Most of the Aberdeen starters were juniors, who played again as seniors and made their way back to the championship game in the Huron tournament in 1914 but ran into an apparently revenge-minded Salem, who took the title.
In an interesting postscript to the 1913 tournament, Miller, who finally made it to Huron on the afternoon of the second day and was disqualified, apparently bragged up its delayed team. With all the good-spiritedness of an Internet blog commenter, the American News opined, “And now a little burg in the woods comes up with the idea that they have a basketball team… Aberdeen has no reason in the world which would compel her to give the would-be aggregation a game but still in a spirit of good sportsmanship offers to give the squealers a chance to meet a real good team. Furthermore Aberdeen offers to pay the expenses of the team to and from the city.” In the end, the News said, Miller “crawled” on the deal.

The asterisk in all this is the “first” state tournament assertion. As a proud Redfield Pheasant, I object. True, in the State B tournament program’s school-by-school listing of tournament participation, 1913 is the earliest tournament listed, and Aberdeen the earliest champion. But the program also has a separate list of state champions, starting in 1912–with Redfield. This matched the lore I’d heard in the Pheasant Capital. So what gives?

In short, those program listings are “a piece of our history we need to review,” John Krogstrand, assistant executive director of the South Dakota High School Activities Association, told me. The 1913 tournament was actually the second year for the Huron tilt. The longer story is based on two issues: the Huron tournament was primarily an invitational, and the Activities Association, which at that time focused primarily on track and field, had only an arm’s-length connection to it. In 1915, Huron College asked the Association to take control of the tournament, which it did in 1917, addressing one problem. In 1918, Krogstrand said, the association “implemented a district system, ending an ‘anyone who wants to come to Huron can play’ tradition of sorts within the tournament.” In time, the SDHSAA board recognized the Huron tournament champions as State Champions, essentially because, Krogstrand said, it was the “direct predecessor to the SDHSAA one.”

So, the money quote I was waiting for: “Officially recognized, the 1912 team from Redfield would be recognized as the first state champion; 1913 Aberdeen the second.” Redfield lost the 1916 championship to Sioux Falls, and in its third title game in five years, Aberdeen lost in 1917, the first official SDHSAA tournament, to Huron (which adds the asterisk to Redfield’s championship). Krogstrand had also mentioned, off-handedly, “There may have been other ‘state’ tournaments,” and indeed, Aberdeen has trophies for “state” championships in 1906, 1907, and 1908, which along with 1913, are in the Alumni Room at the ARCC.

As noted, most of the 1913 players were juniors who graduated in 1914. This was an era when yearbooks shared sometimes clever quotes by or about the graduatesincluding some of these athletes. Team captain Paul Maloney’s quote was, “I have the nerve to fuss, but not the inclination.” Maybe anticipating the Great Gatsby Roaring Twenties unflappable detachment, Joe Koch’s quote was, “A woman’s only a woman, but a good cigarette’s a smoke,” (this magazine does not endorse such views). Ray Cummins—athlete as well as class president, actor, and yearbook athletic editor—had the most daunting quote, “A superior intelligence, invincible in his every undertaking.” Within a couple years, several of these champion athletes were undertaking the World War I military.

Afterword (AKA the last word): Perhaps Redfield got some revenge for that warm-up game drubbing about 60 years later when it beat Central in the old two-class sectional championship to qualify for the State A’s in 1971, a game infamous for then-Pheasant and later Warner championship coach Chuck Welke’s finger-spinning basketball salute to Eagles fans—from one bird to another. // –Patrick Gallagher

Thanks to the Aberdeen Central Alumni Room for research assistance and photos.