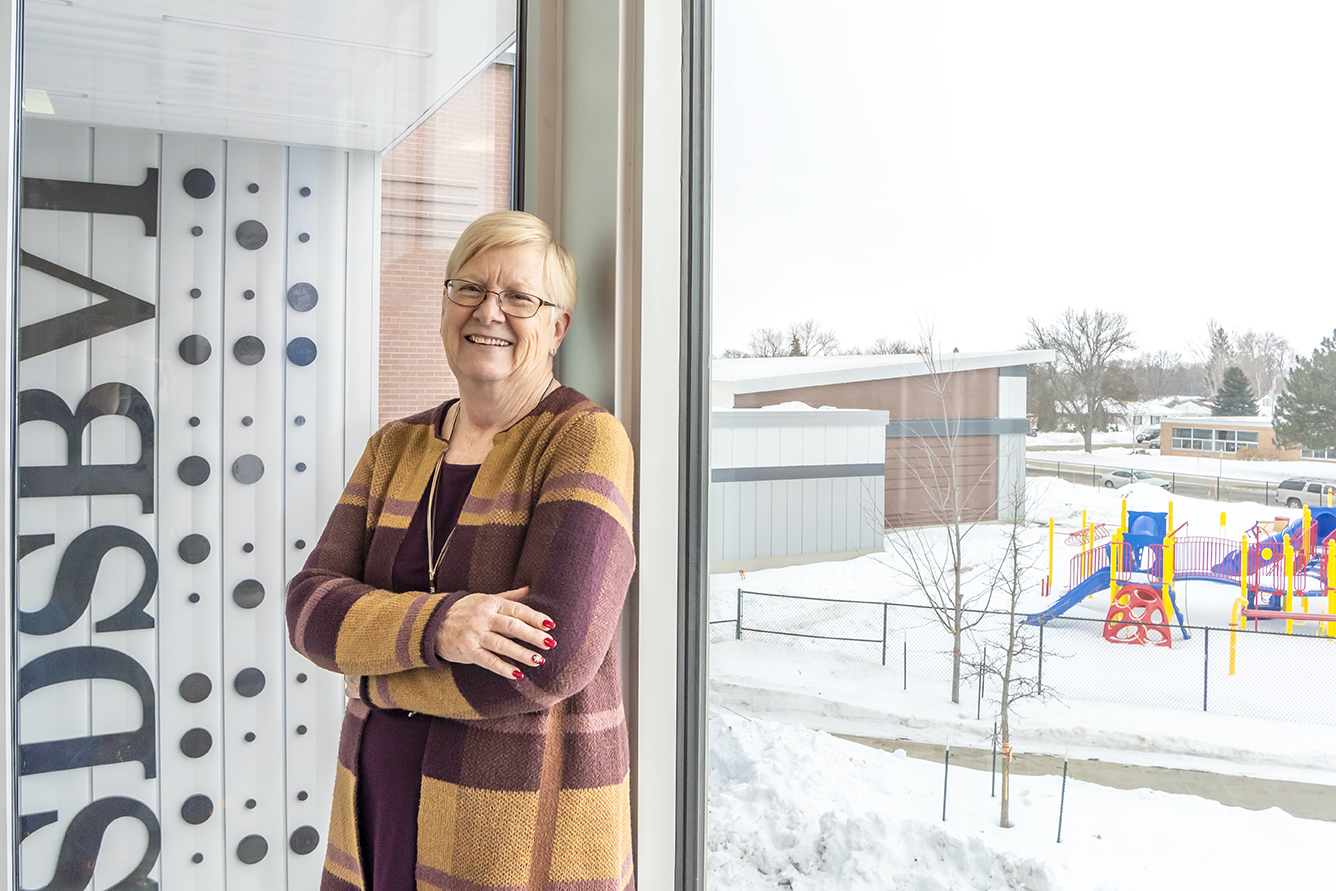 A good leader never stops learning, and Marje Kaiser is one of the best.

Marje Kaiser doesn’t just tell her students they can do anything. She lives it. Sitting in her mostly unpacked office at the new South Dakota School for the Blind and Visually Impaired, she is still surrounded by a few boxes as the school prepared to welcome students to their first semester in a new building. She jokes she hopes to never see another box again, and one can’t really blame her. Marje is superintendent of not just the School for the Blind in Aberdeen, but also the South Dakota School for the Deaf in Sioux Falls. Both schools underwent big moves in 2019. The School for the Deaf changed buildings in October, and the School for the Blind finished moving in December. The two relocations have been a huge focus for Marje over the past couple of years because they were, in a sense, her last big projects before passing the baton to another leader. In May she will retire, closing the book on her 40 plus year career. But in true Marje form when one book closes, another opens. 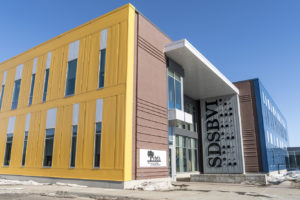 Students at the SDSBVI began their first semester in the school’s new building at the beginning of this year.

This story is about Marje, but it’s difficult, if not impossible, to tell her story without including the schools. Every topic of conversation seems to come back to them and what her hopes are for her staff and students. This is what makes her an excellent superintendent, and also why her retirement has drawn attention. “I’m a little embarrassed, to be honest, that people are talking about it. A lot of people work at a place for many years and then retire,” she says. That may be true, but what people want to know about Marje is how she has not just worked at a place for so long, but how she was able to do it so well. Her answer? To listen and to never stop learning. If she could go back in time to 1986 to her first few weeks as superintendent, her advice to herself would be to really pay attention to others. She explains, “My predecessor, (Charles “Bert” Boyer), really taught me that. If I ever brought a problem to him, he would just let me talk it out. He always let me know he was listening, and he’d ask me clarifying questions, but he’d mostly let me do the talking until it was pretty clear I knew the solution. Usually by the end of our conversation he’d say, ‘I think you pretty well have this figured out.’”

With listening, comes learning. And that is something Marje has always held close at heart. Growing up in Central Minnesota, like most kids she had some teachers that were wonderful and some that weren’t. All of them inspired her to go into education herself at St. Cloud State, so she could become one of the good ones. It was at the college radio station that she met her husband, Steve. After graduation, she became a high school English teacher and Steve’s work as a news director and anchor landed them first in Sioux Falls, and then Aberdeen. She explains that at the time she never thought she would work with kids with disabilities and had no desire to become a school administrator. Then, fate stepped in. Steve did an interview shortly after they had moved to Aberdeen for a story on a federal grant program that was being housed at the School for the Blind. The man running the program, Hugh Woods, mentioned they were looking for a public relations person to help get the word out, and Steve knew of a qualified woman who was looking for a job. Marje laughs, “When he told me about it I thought, ‘I’m a high school English teacher, what is this all about?’” Still, she jumped into the role of writing press releases, doing radio talk shows, and hosting interviews, all the while devouring new information as she went along. “I realized just how much I didn’t know, so I started taking classes at NSU on vision impairment and I read everything on vision in our professional library that I could,” she says. When Hugh left, Marje took over his role as program director, a position she held for eight years. She then stepped away from the school to help Steve run a radio station they owned in Redfield, but ultimately came back as superintendent just a year and a half later. The learning didn’t stop there. She went on to get her master’s in school administration from Northern, and later while in her 40s, earned a doctorate from the University of South Dakota. Going to school in Vermillion while working in Aberdeen and raising two children, Chris and Katie (the latter who also became a teacher), was not an easy task. She spent two summers on campus at USD, studying there four days a week and then returning to Aberdeen to work and be with her family on Fridays and on the weekends, and took online courses in between. To help with the work-life balance, she and Steve also lived at the School for the Blind for 17 years while their kids were growing up. She explains her role model for getting her degree later in life and for always learning is her mother. “In the 1920s, she dropped out of school and got married on her sixteenth birthday. Later, when she was in her 80s, she went back to school and got her GED. She didn’t do it for anyone else, it was for her. She was the epitome of a lifelong learner.”

Access to education has changed Marje’s life, and she certainly has seen the difference it has made in the lives of her students. Watching them progress and knowing the school has helped change the trajectory of their lives are what she will miss the most when she retires. Her eyes have tears when she talks about students who have gone from being told they will never be able to do certain things because of their impairment to completely shattering those expectations. She explains, “Watching them change and learn over the years has made all of this worth it for me. I think for most of us the question is, ‘Did the things that I did matter? Did they make a difference in someone else’s life?’ Seeing the people here at this school work together on behalf of our kids, I know we’ve made a difference.”

It might seem like it’s all about helping kids, but in reality, Marje says the school’s job is to make sure students have access to the curriculum and technology they need to be self-sufficient and their own advocates from an early age. With new computer technology, people with vision loss have more opportunities than ever before when it comes to what they can accomplish in the workplace. Still, Marje cites an article that says 70% of the visually impaired in the U.S. are unemployed. There is more work to be done in getting kids ready for their future, and also in getting society ready. The school is only the tip of the iceberg, it is what everyone can see, but its work reaches far outside the walls of a building. They have teachers working with close to 250 students ages birth to 21 in a variety of settings statewide, including public schools. Marje says, “If a student can graduate but they can’t live on their own or travel independently, then they can’t really function in society. So our job is to make sure they are as ready as possible in those daily tasks we all need to do to live—like plan meals and buy groceries, and also in going to a job interview and saying, ‘This is what I can do, and this is how I will do it for you if you hire me.’ Along with that, we have to get the word out to the general public and to employers, so they know they don’t have to be afraid of blindness. A blind employee can be an asset to your company.” The school helps students by making sure they have work experience and a resume before they leave. 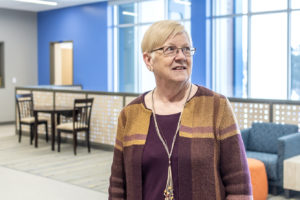 Thinking about a new chapter in life means looking to the future. To lead both the School for the Blind and the School for the Deaf, Marje has traveled back and forth between Aberdeen and Sioux Falls every week since 2010. In her retirement, she hopes to still be on the road, only more so in traveling with her husband. Not surprisingly, she also plans to keep learning by taking more classes that interest her at the library and at the ARCC. But it doesn’t take long for her future plans to evolve into a conversation about the school’s future too. There is a tremendous shortage of teachers for the visually impaired across the country. To offset this, she says her hope is to see a master’s degree in special education that focuses on vision become available at NSU. To chip away at that high unemployment rate, she would also like to see the school take on an expanded transitional program for students to gain more work and life experience before they leave home for college or to find a full-time job. The school will always keep moving forward, as long as it has the right people in place. Marje is confident that it does. She says, “Working here has been so much more than I ever imagined it would be. It’s been just a wonderful opportunity to work with wonderful people, and to see so many positive changes happen in kids’ lives as a result.” // — Jenny Roth