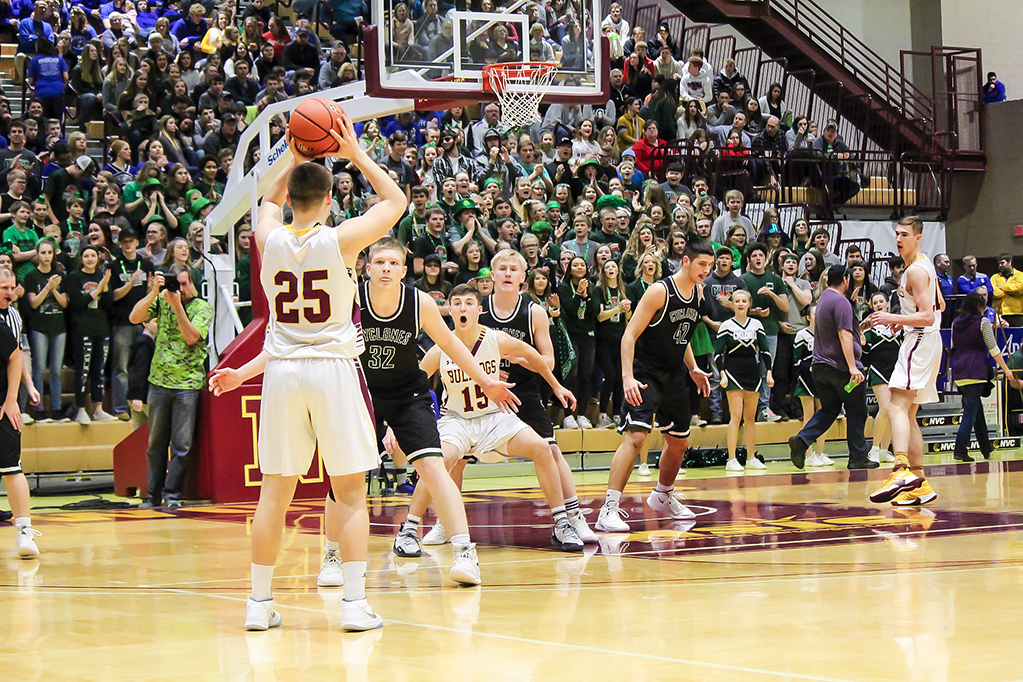 A mix of careful planning and dedicated basketball fans makes Aberdeen the perfect place to host this statewide tournament favorite.

If you’re hosting an event and inviting 6,000 people, how far ahead do you start working on it? If you’re Gene Brownell and you’re hosting the State B Boys basketball tournament—and eight coaching staffs, about 100 players and cheerleaders, bands, parents, media, and thousands of fans—you start about two and a half months before the mid-March tournament. 6,000 people? Less than three months? The guy knows what he’s doing.
For state high school tournaments sanctioned by the South Dakota High School Activities Association and held in Aberdeen, Central High School is the host school, and the athletic director is the tournament manager. For Gene, who has been the A.D. at CHS for 21 years (half of his career at the school), the job is simply “to put the entire tournament together.”

He must be doing it right. As Jerome Nersheim, head coach of the Clark-Willow Lake Cyclones, whose team won the tournament in 2019, says, “To be honest I wish the other tournaments could copy what Aberdeen does to make the State B tournament as great as it is. Aberdeen made the tournament a great memory for myself and my players. Every place we went the people were talking about the B’s.”
Gene and his variety of helpers succeed in this despite the punches Mother Nature typically throws at a March event in South Dakota. The 2019 tournament was no exception as one of that winter’s bomb cyclones passed through on the first day of the tournament. But Gene credits the City and Northern State University with promptly moving snow to make the best of a miserable situation.

That kind of attention is important because, as Hub City Radio’s Dave Vilhauer, who has covered State B tournaments for the American News since the 1980s, observes, “The State B is the feel-good event of the winter in South Dakota.” He adds, “It’s an opportunity for people to forget their troubles for four to five hours and be part of something bigger than themselves. They understand they’re part of something big, and they appreciate it.”
And Gene Brownell seems like the right guy for the job of running a big event for the smaller schools and communities in South Dakota. “I understand how small town people think,” he says. “I saw my first State B tournament with my dad in 1959 in Huron.” And Aberdeen seems to be the right place. Gene adds, “People want to be welcomed and know that we’re happy they are there. Here they can drive up and down Sixth Avenue and see marquees welcoming them.” He notes, “The impact of 6,000 people coming to a town of 28,000 is something we notice.” As Coach Nersheim says, the guests notice.

The B tournament bounced around some, but the Barnett Center helped establish it as a near-permanent fixture in Aberdeen. Dave Vilhauer covered his first State B in person at the Huron Civic Arena in 1989, and “the place was packed.” Then in 1990 it returned to Aberdeen for the first time since the three-class structure started in high school basketball and was held “in a packed Barnett Center.” In 1991 it went back in Huron, but, Dave says, “The place was so crowded they locked the doors before the championship game. I knew then it would never go back to Huron.” Since 1992, with a one-year hiatus, it has been back in Aberdeen.

To organize the tournament, Gene has a binder with about 40 tabs, which is his “roadmap.” “Once I have that book full, then I’m ready to go,” he explains. He recruits about 60 people, volunteers and paid, to operate various jobs during the tournament, from ball boys to announcers to security, and coordinates with the SDHSAA, the Aberdeen Area Convention and Visitors Bureau, NSU, South Dakota Public Broadcasting, and anyone else involved with the tournament. NSU does a great job managing the building, he says, and the Wolves Club runs concessions, which is often worked by NSU athletes.

The Aberdeen area supports the tournament well even when no area teams qualify. Gene asserts, “Sports is Aberdeen’s main tourist industry.” And, in particular, Dave adds, “This is a basketball-crazed region.” Clark-Willow Lake’s Jerome Nersheim has seen it too, “Aberdeen and the surrounding area are very interested in the games. Even if their school isn’t playing in it, they come to watch and cheer.”
While the SDHSAA technically runs the tournament and is responsible for bringing in entertainment, such as the high school bands, halftime performances, and the National Anthem singers, Gene is the man, and he works with all the local people and organizations who make the tournament memorable.

“The Aberdeen Area Convention and Visitors Bureau has supported the State B tournament for as long as I can remember,” says Casey Weismantel. He’s been with the organization for 15 years, and his volunteers tell him CVB has been involved for longer than that. “We don’t take events like this for granted,” he says. “We try to give our visitors a great experience.”

The CVB does a variety of activities to support the tournament, including working with businesses prior to the event to help promote it. “They know the tournament is coming,” Casey says, “but we remind them, and so many put up welcoming messages on their outdoor marquees.” Besides telling visitors that we’re happy to see them, Casey says those signs help the occasional native who’s not aware of the tournament. “It helps them know why the drive-through line is slower than usual,” he says.

Sometimes the CVB helps visitors find lodging during the tournament, since hotels in Aberdeen and surrounding communities fill up. “But that often means helping someone who’s in town for another reason, like a funeral or a business trip, and didn’t know there was this big event in town,” Casey says. “We’ve always been able to help them find a place to stay.”

The CVB greets teams with visitor bags when they arrive to make them feel appreciated. In 2019, the CVB promoted the slogan “Aberdeen Is the Place to ‘B’,” which was on the players’ cinch bags, on volunteer t-shirts, and on skirting for the press tables at the tournament, which were visible on TV broadcasts. Casey notes, “It was great way to get the message in front of lots of eyes in both the Barnett Center and on SD Public TV.” In addition, some hotels and restaurants had their staff wear the t-shirts at work during the tournament.

But among the tournament crowd, the CVB is best known for the hospitality room they set up in the Barnett Center. Casey explains, “Our job is to invite coaches, officials, ball boys, bus drivers, volunteers and any other tournament workers to our hospitality room in order to say thank you for their hard work and dedication to the tournament.” The CVB works with local businesses to provide a different menu every day, plus they set up big screen TVs tuned to other high school and NCAA tournament games. The CVB also recruits volunteers to serve the food. “Actually,” Casey says, “the volunteers recruit us. They call us months before the tournament to be sure they’re on the list. They love helping and do a great job.”
And it’s noticed. Cody Lawrence, head coach of the Timber Lake Panthers, brought his team to the tournament in 2019 and says, “Aberdeen always provides a great hospitality room. They do a very good job of mixing up the menu each day, and it is also nice to be able to watch other state and college basketball games that are going on at the same time.” Coach Nersheim was more succinct: “I have been to the hospitality room in Aberdeen and it is awesome! Second to none!” (But he used more exclamation points.)
For those who can’t come to the games, media is the answer. Gene makes sure that reporters and radio broadcasters from the participating communities have a place to work. In addition, South Dakota Public Broadcasting has presented SDHSAA state events for about 30 years. Larry Rohrer, SDPB director of content, says they started as a “rebroadcast partner with KELO TV in the ʻ80s and ʻ90s. We innovated Internet coverage with SDHSAA in 2001 and have also been the TV partner since 2004. Over time, we expanded coverage from five events to a total of 16 athletic and fine arts state events each season.” With SDPB’s multiple channels, all games of all state boys and girls basketball tournaments are broadcast live.
Larry also has strong feelings for the Aberdeen tournament. “SDHSAA tourney hosts have a big job. Gene and his team and all the volunteers are outstanding… end of story!” he says. “I’ve been at tourneys all across the state over the past 15 years as a fan and broadcaster, and Aberdeen is consistently prepared, organized, and professional.” Plus, he says, “The Boys B is in the perfect facility. It rocks on championship night like no other.” He adds, “I have reached a point in my career that I get to choose which tourneys I am going to help with. I always request to come to Aberdeen.”
And then there are the games themselves. Like any tournament, the State B has had memorable ones. Having covered dozens of tournaments, Dave Vilhauer remembers Jared Reiner from Tripp-Delmont, who later played in NBA, as well as the era of White River phenom Louie Krogman, the state’s all-time leading scorer in basketball who took his team to State three years in a row, winning as a senior. “People lined up two to three blocks to get in to his games,” Dave remembers. But like most people, Dave points to one of the unique things about the State B—the dedication of fans. “When Roslyn made it for the first time in years, I looked at the crowd, and it looked like 1,000 people wearing red in the cheering section.” Not bad for a town of about 200 people.
“The B tournament has a special aura. It has the same feeling it did in my first one in 1959,” Gene says. “Basketball is a big thing in South Dakota. It’s our winter sport, and we have more winter than most! The tournament is the culmination of winter.” And it’s not just special for the towns participating. One of Gene’s favorite aspects of the tournament is seeing people year after year, locals and people from the area, who always come to the tournament whether they have a team in it or not.
Dave sees the same thing, “I see many people every year who have no connection to the teams but won’t miss the State B. I even often see players, coaches, and fans from AA and A schools who didn’t make their tournament but come to the State B rather than their class tournament.”
The State B is “a perfect fit for this basketball-crazed region,” Dave says. “Even the consolation games draw good crowds,” compared to what he’s seen at other tournaments. That’s echoed by Clark-Willow Lake’s Nersheim, “We have had the unfortunate event of losing a few times in the first round and had to play in the ‘sunshine league’ [the afternoon games of the consolation bracket]. In Class A, it is only fans and parents of the two teams playing watching those games, but in the B’s, the Arena is pretty much full and loud. The whole experience in the B’s is so much better because of the average fan coming to watch and the city of Aberdeen.”
Gene sums it up, “We’re a community of small town people and we’re hospitable because of that. We welcome people. For any community, a state event helps your viability. People see what you have to offer.”
The State B is like a gift Aberdeen gives to those fans, and it’s a gift that keeps giving back to Aberdeen. // –Patrick Gallagher