Events
Lead, Follow, Get on Board!
By Patrick Gallagher | March/April 2020 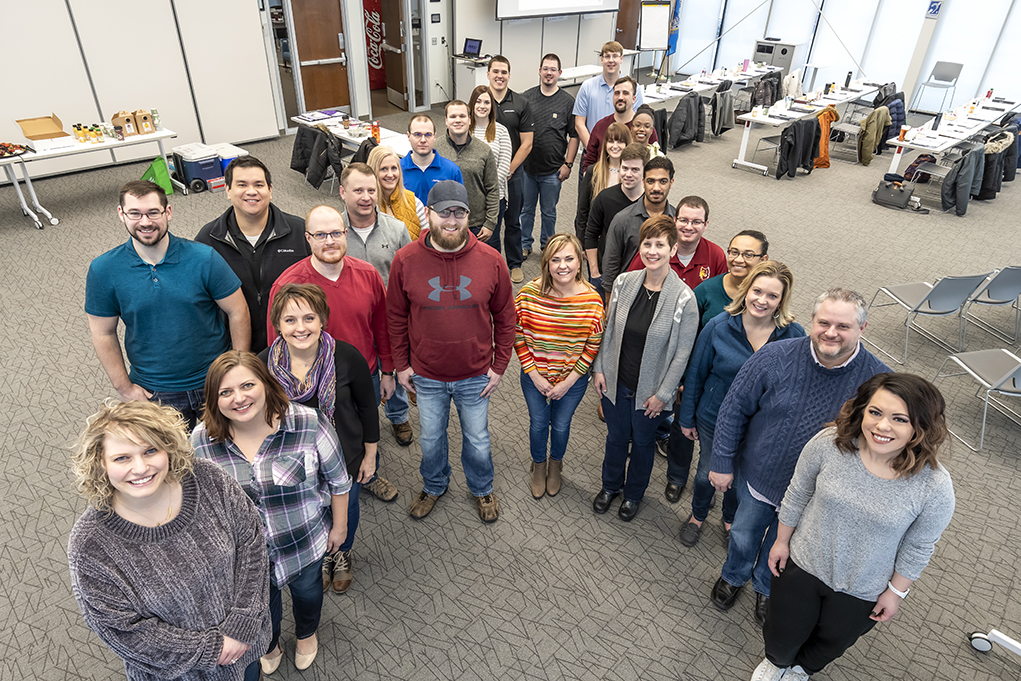 Leadership Aberdeen plants the seeds that grow our city’s future.

“Grooming great employees for our member businesses and great leaders for our community and state—and getting them involved in the community.” That’s how Aberdeen Area Chamber of Commerce President Gail Ochs describes the goals of Leadership Aberdeen, one of the Chamber’s flagship programs. The leadership development effort launched its 34th year in January, and it’s going strong, to hear from its leaders and alumni.
While she wasn’t with the Chamber in 1987 when Leadership was launched, Ochs says, “The board of directors implemented the annual program to provide a continual supply of qualified, educated leaders to serve the Aberdeen area.” It didn’t hurt that the Rapid City and Sioux Falls Chambers had recently launched similar programs—“and when Sioux Falls did something, Aberdeen noticed,” she smiles. Some 811 participants later, the Chamber believes “it’s one of the strongest programs we offer to our members and the community. It definitely has provided businesses and the Aberdeen area with well-rounded leaders.”

A Leadership class generally includes about 30 people, and they get involved in the program for various reasons. Glenn Jakober, retired from Avera St. Luke’s, was in the 1989 Leadership class and had an altruistic vision, “Aberdeen has been good for my family and I wanted to be able to do good for the community.” Tarah Heupel from Sanford Health, who participated in 2016, says, “As someone who didn’t grow up in Aberdeen, I think it helped open my eyes to some of the opportunities in the community and helped me feel more a part of the fabric of our town.” Elissa Dickey, a 2019 Leadership graduate from Northern State University, summarizes what many say, “To learn new skills from presenters, increase my confidence in my own leadership abilities, network with other professionals, and participate in a project that helps the community.” Kaitlyn Awe, with Dakota Supply Group, who participated in 2016, adds, “I was looking to be involved in more than work after I moved back home, and I was looking for a training/growth opportunity. My manager at the time recommended Leadership Aberdeen.”

As Awe implied, the role of their employers is a common element among Leadership participants. Many businesses encourage employees to get involved with the program, and most pay the tuition. Several organizations aim to have someone participate almost every year. Jim Lust was the Chamber board chair when Leadership Aberdeen started, and his car dealership had participants each year for the first several years. Other businesses participating regularly have included 3M, Dacotah Bank, Plains Commerce Bank, and Glacial Lakes Energy. Ochs adds that Avera St. Luke’s has had someone in every class.

“Dale Stein, CEO of St. Luke’s Midland, asked me to make sure that the hospital had at least one participant in each class,” Jakober follows up on the point. “Dale was a staunch supporter of Leadership Aberdeen. With Dale’s untimely passing, the Dale Stein Leadership through Service Award was started and awarded annually at graduation, and the key is service.”

The program currently includes twelve weekly sessions on different leadership topics held in different venues. In the early years, the group typically met in one place, and speakers and business leaders came to them. “We added business partnerships in 2008 and started moving sessions to those businesses,” Ochs explains. The hosts present on the topic and provide tours of their businesses. In 2019, for example, Agtegra and Sanford Health presented on community building, Molded Fiber Glass on resilience, and Avera St. Luke’s on gratitude.

The most public part of Leadership Aberdeen every year is the project the class undertakes. While consideration of community issues has always been a part of the curriculum, the addition of a single project occurred in 2004. “That starts with an analysis where participants discuss what they would change if they could,” Ochs says. The class decides what they will do, and over the years, various themes for projects have emerged, frequently focusing on the diversity of people, cultures, and opportunities in Aberdeen, and, Ochs adds, “Youth is a very popular theme.” Some projects have raised significant money for the beneficiary, although that’s not always the goal, and some have continued long after the class. In fact, the first project in 2004 created the Shoot for the Stars basketball game in which Aberdeen “celebrities” play against the Special Olympics team. Shoot for the Stars is still in operation. The 2019 Leadership project, “Night in a Car for Journey Home,” raised over $20,000 for the Journey Home homeless shelter when about 100 people spent at least part of a night in a car in the Aberdeen Police Department parking lot to help draw attention to homelessness. Tarah Heupel remembers the 2016 project, “Our group heard there was a need at SPURS and wanted to help them put up their pole barn. It was amazing that we could accomplish that in just a few months.”

The 2014 class raised $35,000 for the new Safe Harbor building, and the 2015 class opened a store for Hub Area Habitat for Humanity to sell donated home improvement items. The 2018 project refurbished old advertisements on downtown buildings, about which participant Spencer Sommers from CO-OP Architecture says, “Our particular project has gone beyond the timeline of the class and continues to evolve.” He adds that as a result, he received a $5,000 grant for the project and was invited to speak at a place making conference in Toronto.

While the program is fun for participants, that’s not why the Chamber created it. Ochs says, “Each year participants are asked to get involved in the community in some way, either through the Chamber or through another organization they are passionate about. Hundreds have gone on to serve on local nonprofit boards.” And that’s happened. At least ten alumni have taken public leadership roles by serving on the city council, school board, county commission, or the state legislature. Another dozen alumni have become Chamber board chairs, and about a couple dozen more served on the Chamber board. Gina Karst, executive director of Safe Harbor and a 2009 Leadership grad, says, “Having the relationships has helped me in finding new board members and assisting me in fundraising activities.” Elissa Dickey adds, “I was recently named president of the board of Aspire, and I feel that I am approaching this role with more confidence because of my experience in Leadership Aberdeen.” Thomas Seyer, a 1992 graduate who works at Rhodes Insurance, agrees, “Since taking Leadership I have participated in a large number of roles both for nonprofits as well as city organizations. The class certainly played a role in the level of involvement I have had.”

All participants noted that the connections they made through Leadership and the networking were key benefits of the program, from both a professional and social perspective. Kaitlyn Awe says, “I still see and interact with many from my class now and again. It’s great to have contacts in the community when questions come up or when I’m looking for ideas.” Gina Karst says, “Some of the relationships have affected my career because some of my graduating class have served on my board or have assisted with bouncing ideas off of each other. Personally, some of the relationships have blossomed because we have children in similar age groups or in similar activities.”

Some of the key lessons and benefits of Leadership may be obvious by now. Kimberly Fordham-Lien of Jason’s Truck and Auto Body, a 1998 graduate, says, “Participation in Leadership Aberdeen has been vital to the success I’ve had in my small business. The experience taught me so much about the community and definitely inspired my involvement.” Lutheran Social Services’ Liesl Hovel, who participated in 2017, says, “I believe that the experience of Leadership Aberdeen assisted in my knowledge of the community and businesses within Aberdeen. It has assisted in my reaching out to others when planning events for a nonprofit and seeking sponsorships or support of something. The connections and relationships are definitely worthwhile!” Thomas Seyer adds, “I learned about how things actually got done rather than how most people think things get done—all of the behind-the-scenes discussions and work that has to go into projects to actually get them accomplished.”

Leadership Aberdeen has become a family affair as well. Steve Kaiser, who participated in the inaugural year of 1987, and his wife Marje, in 1988, were the first married couple to take part. Their daughter followed suit about 30 years later. Several other married couples as well as parent-and-child teams have participated.

Leadership Aberdeen continues to be strong. Ochs noted that since it started, many companies have developed their own professional and leadership development programs that might compete, but at the same time, Leadership has seen its largest classes in recent years. Clearly people need to know the specifics of their own employer and industry, but nothing can really match learning with and about your peers and the social capital that creates for the whole community in which you and your company work.

Should you give it a try? Elissa Dickey thinks so: “Do it! It’s a big time commitment, and a lot of work goes into the community project, so I know it can be daunting to take this on along with work, kids/family obligations, etc. But if you can make it work, the experience will be so rewarding for you personally and professionally. Go for it, and have fun!” Based on our sampling, about 800 others would agree. // –Patrick Gallagher