Your City
Could You Navigate Aberdeen Without Your Car?
In January, we brought you the results of a survey on the ways Aberdeen can grow as we enter a new decade (check out our January/February and March/April 2020 issues). In this part three of the series, we invite you to buckle-up and experience our city from the view of its public transportation systems.
By Jenny Roth | May/June 2020 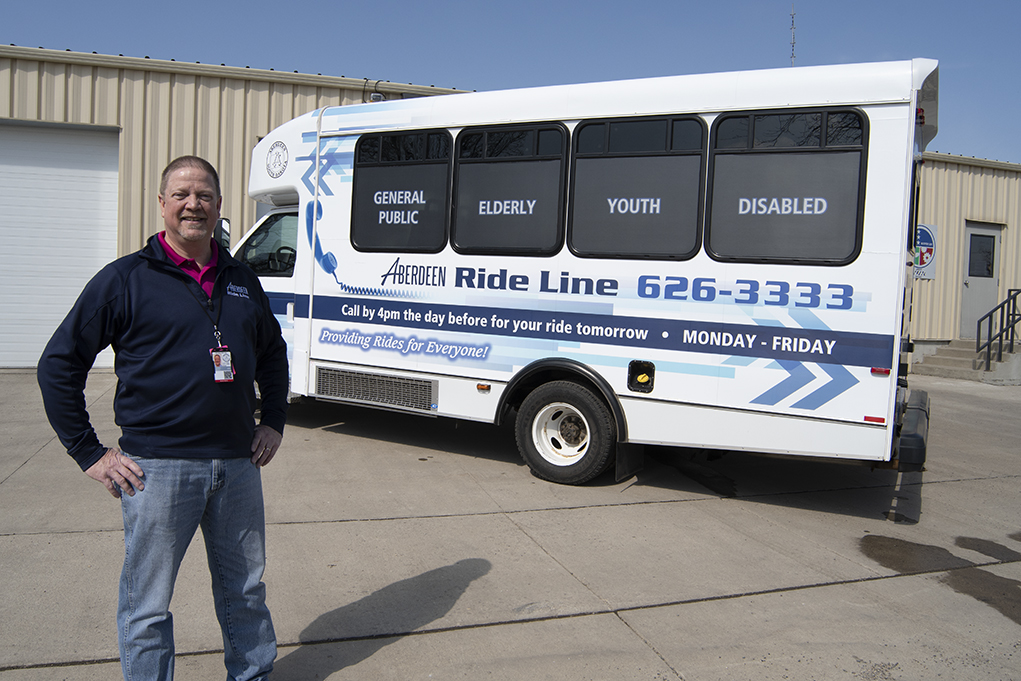 “You can’t understand a city without using its public transportation system.” If this is true, would you be able to say you really know Aberdeen?
The quote is one by writer Erol Ozan, who we can safely assume has never been to the Hub City and therefore didn’t base these thoughts on all of us here. His words float around the Internet mostly on travel blogs, inspiring wanderers to immerse themselves into each new city they enter by sitting shoulder to shoulder with its people. One of the easiest ways to do this is to talk with the taxi driver, who has probably lived there her entire life, or at least long enough to know the quickest routes around traffic. Or, you could go one step further and catch the subway or bus and strike up a friendly chat with people who are just going about their usual day-to-day. You’d probably walk away really knowing what life in that new place is all about.
I agree with Ozan’s quote that the best way to know a place is to know it’s people. If taking public transportation is the way to do that, though, then admittedly this would mean I have a lot to learn about the region I call home.

Driving myself everywhere is something I’ve done since I got my license at age 14. Take away my car, and it would be devastating. Many of you reading this can probably relate. If I want to go somewhere, it’s not a matter of if and how and when I’ll go, it’s a matter of jumping into my car, starting it, and being at the place I want to be. Does this sound like you too? How easy, and how taken for granted. It’s a far cry from my husband’s grandma, Jenny Haar. At age 90, she has made it through her entire life so far without ever driving a car or having a license. She worked at the downtown Virginia Cafe during her teenage years, and when I asked her how she got around to work and school in Aberdeen without driving, she told me she walked (from her house on Lloyd Street) or took a taxi on cold mornings. But, she added, “I was young and a long walk was easy for me then.”

Her point hits home. In 2019, the city of Aberdeen completed a Coordinated Transit Plan. Its job is to identify transportation gaps that exist here and the populations affected by those the most. Those identified populations are: seniors, persons with disabilities, and low-income persons. We could add school-age children, college students, refugees, and immigrants to this list as well. Getting to work, to your appointments, to your groceries, or to simply visit a friend isn’t as simple as walking or calling a cab for everyone.

Enter the Coordination Committee. This group of about 20 or so local stakeholders has been meeting since the end of 2019 to examine ways our city can grow and improve in public transportation. Committee members represent many branches of Aberdeen, including human and service agencies, local government, and transit providers. They’ve pinpointed our major unmet needs as far as public transportation goes, and of these have prioritized the top four, which are:
Providing transportation for students coming and going to school.
Providing transportation that spans normal business hours (i.e. —for those going to work early in the morning or late at night and for weekend travel).
Providing residents more door-to-door service, versus curb-to-curb (more on that in a minute), and
Providing more workforce support transportation to workers within Aberdeen and to those traveling into town from around the region for employment.

Currently, Aberdeen Shuttle & Taxi is the only taxi service available in town. Owner Randy VanMeter has operated the business since 2005 and was unable to be reached for an interview. You can also catch a ride just about anytime via the Lyft and Uber apps. But the main form of public transportation here is Ride Line, a service that started back in 1968 to bring meals to elderly. They have since expanded to serve all populations (including those with disabilities) and to become a department of the City of Aberdeen.

Manager Tom Wanttie says Ride Line today is made up of 16 buses and 21 staff, including three full-time dispatchers, one full-time mechanic, himself, and the drivers. They give rides in Aberdeen and within a 2.5-mile radius of the city, as well as provide connections to Summit for people wishing to get on the Jefferson Lines bus to Sioux Falls or Fargo. On an average day, they have between 330-380 riders. Rides cost $2 each way per individual and have to be scheduled by 4:00 PM the prior day. Why the need for advanced scheduling? Half of Ride Line’s funding comes from federal grants. Wanttie explains, “Because we have a taxi service in Aberdeen, we cannot offer same-day rides. That’s a rule put in place at the federal level.”

Ride Line is a huge part of the solution concerning transportation needs in Aberdeen, but they can’t do it alone. That’s why the Coordination Committee is searching for other resources in town who can help out. About 46 percent of Ride Line passengers are school rides. This means roughly 175 youth depend on Ride Line to get to and from school every day. Wanttie says they often have a waiting list of student riders. They typically start taking reservations for the new school year on June 1 and fill up quickly.

If you remember back to our list of the top four unmet transportation needs, rides for school kids is number one. Tom Janish, director of finance for the Aberdeen School District, says when he started his position in 1996, the schools had just eliminated in-town busing. “The state of South Dakota had recently implemented a new funding formula, and the Aberdeen School District was going through significant budget reductions. The budget for busing was reduced from $540,500 to $429,634—about 20 percent— due to this change.” Even so, until 2002 the school did keep out-of-town bus routes for all students in grades K-12. Now, the number of routes has decreased even more. They provide busing for K-8 students who live more than five miles outside of town, and for a fee, also to those living 2.5 to five miles away. Janish explains it would be difficult to get in-town bus routes back because of the expense. “The cost of one rural route is about $45,000. When we eliminated routes in 2002, we took out 10. So to add those in, it would be $450,000. My guess is we would need to add at least three to five more on top of that to cover the entire city, so another $150,000 – $250,000.”
With in-town busing through the school off the table for now, the Coordination Committee has been seeking other ways to help kids find rides to school. “We’re still looking,” Wanttie says. “We’ve asked other entities in town that have buses or vans, like churches or the Boys & Girls Club and the YMCA, but those places are all using their vehicles to their max capacity already as well.”

Other gaps in Aberdeen’s public transportation include a longer span of service and door-to-door pick up. Ride Line drives from 7:00 AM
to 7:00 PM Monday through Friday. There are employers in town, specifically in the manufacturing and industrial sectors, whose working hours fall outside of this schedule. Wanttie says, “We have people asking for rides outside of our regular hours, wanting earlier hours than we start driving because their work starts earlier.” Ride Line is also curb-to-curb, not door-to-door. Many populations, the eldery and young specifically, would benefit from having even closer access to transportation. “We’re looking at possibly vanpooling as an option for some of these issues, but that’s in the very initial stages right now,” Wanttie says.

Ride Line is busy even in the summer when school kids are on break. Many of them still need rides to and from their activities while parents are working. This summer will be the second year they’ve added their Summer Ride Program. It allows kids ages 6-16 to get on the bus and take it wherever they need to for just $60 for the entire summer, as long as the rides are still scheduled at least by the day before.

With Ride Line operating at least 50 percent on federal grants, it isn’t always a guarantee that they will get the funding they need. Some grants cover administrative costs, others pitch in for new equipment and vehicles. Wanttie says, “Getting funding and grants is a process that is always in motion. We aren’t always sure from one grant year to the next what our funding will look like.” For example, one of their regular grants, which in the past has helped cover the costs of equipment and buses, is not going to be available this year. The South Dakota Department of Transportation, the City of Aberdeen, Avera St. Luke’s, and the United Way are some agencies who make up the rest of Ride Line’s funding, along with fees from riders and private contracts.

Even if we can raise the bar higher for public transportation in Aberdeen, we would surely notice if what we did have wasn’t here. Wanttie says, “We have a number of people whose only mode of transportation is Ride Line. Maybe they don’t have a vehicle, or are eldery and can’t drive anymore. People with disabilities, the elderly, youth riders, and the general public— those are all parts of the population we serve.”
Erol Ozan’s quote seems more true than ever. To understand how everyone who lives here gets around, and the challenges they face in doing so, is one way we can all better know and take care of each other.

You can help Ride Line in Aberdeen by donating to the program or by donating bus passes for riders in need. To learn more about Ride Line, or the Coordination Committee, call Tom Wanttie at 605.626.3333.