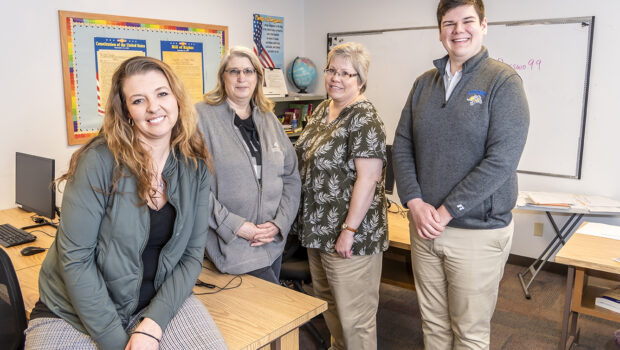 Education In Their Shoes

The mission of Cornerstones is to access, promote, and provide education and employment training services to area workforce and employees.

Imagine this: your country is war torn or poverty stricken, your family is struggling to survive, and you know that changes must occur in order to find safety. This is just one version of an immigrant’s reasoning for seeking a better life elsewhere. For some, the idea of moving to a new country is often romanticized. The reality of a new life in a foreign country can be just as scary as the one that is being left behind. Language barriers, culture shock, and even the flaws of the immigration system are just a few obstacles immigrants face when coming to the United States.

Embracing change can be a tough thing to do for people, especially in a tight-knit community like Aberdeen where almost everyone knows everyone, but that’s also one of the spectacular things about Aberdeen. It’s familial warmth allows for strangers to be welcomed with open arms and opportunities in the community present themselves for not only immigrants to become members of the community, but for the Aberdeen community to learn more about diversity and the world itself. 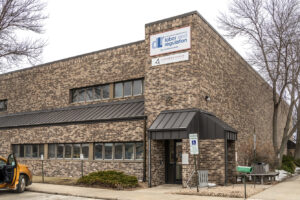 Originally built in 2009 as a private nonprofit of the Department of Labor, Cornerstones can be found at 420 South Roosevelt Street right behind the C-Express Cenex Gas Station.

The work being done at Cornerstones Career Learning Center is just one of the ways the Aberdeen community has embraced diversity. Cornerstones is an adult education center focused on delivering free classes in basic education with a heavy emphasis on teaching English as a second language.
When Cornerstones opened in Aberdeen in 2009 on Roosevelt Street, it was only the third location for the private nonprofit organization. The first location opened in Huron in 1986 as the Career Planning Center with a goal of incorporating more diversity into the workforce. This meant creating an opportunity for not just the influx of immigrants moving into South Dakota to get an education, but also for people who wanted to complete their secondary education after not being able to do so by graduating high school. When a second location opened in Mitchell in 1994, the organization was renamed Cornerstones and became a part of the Department of Labor as a private nonprofit. Vermillion and Yankton also have locations that both opened in 2016.

Jennifer Wagemann is the Program Coordinator for the Aberdeen location and she has been with Cornerstones since 2019. Through her work, she has been able to actively engage with immigrants who’ve moved to Aberdeen in the search of changing their lives for the better.
Currently, the Aberdeen location serves Somalis, Karens, and Hispanics for their ESL courses, all of whom come from Redfield, Groton, Leola, and the rest of the surrounding areas of Aberdeen. Cornerstones offers two ESL courses, one class in the afternoon and also an evening class for those who want to attend after work.

When Jennifer first started working at Cornerstones, part of the job required training in Sioux Falls. For the first few minutes, her program instructor only spoke and wrote in Japanese. This simulated what immigrants face when they move to a new country with little to no language skills of the common tongue, and added some perspective for new teachers. “It puts you into their shoes,” says Jennifer. “If I were to go over to one of their countries and have a regular conversation, I wouldn’t be able to do it.”

Cornerstones’ ESL classes also help with social skills with potential employers. Jennifer says, “We get referrals from the Department of Labor. It’s easier for them to get jobs if they can speak English.” If you’ve ever noticed the staff at the Aberdeen Walmart, you may have noticed that it’s pretty diverse. Jennifer says the store in Aberdeen hires a lot of Somalis who are referred to Cornerstones so they can work on their English and have the opportunity to interact with the public more.

Cornerstones’ ESL classes are in demand as they are the only free adult education courses offered to the public within a hundred miles of Aberdeen. “We actually have a group from Redfield that have gone through college in Mexico and are veterinarians that work out on a pig farm. They take turns coming to ESL classes to learn English,” says Jennifer, “We actually have a lot of people from other countries that are doctors and are highly educated, but they just want to learn English, whether that’s writing it or speaking it.”

Cornerstones’ other major focus is their General Education program. The GED program begins with an intake of students who do initial required testing to see where their abilities are at. After initial testing, students begin classes and work section by section on each subject until students begin to feel they are ready for the official test. According to Jennifer, those who do well enough in their ESL classes have the option to go right into their GED courses and work towards that goal. GED classes at Cornerstones are free, and all the materials are provided for students to use. The only thing they have to pay for is the GED exam itself, which costs $32.50.

For their GED classes, Cornerstones teaches a variety of ages. Jennifer explains, “We have a few 17 year olds, but it’s mostly 18 on up to people in their 40s and 50s.” Their reason for getting their GED? It’s on their bucket list. Most are motivated by their kids to finish what they started a long time ago. “They come in very nervous, and our classes are small. We have up to ten in a class, and a lot of them come in thinking they will never be able to do this, but we have programs that they can utilize before taking the actual GED test to see if they are ready or not.” Jennifer adds that on a perfect night, if everyone could show up for class, it would take that small number of ten students a night and jack it up to 41.

Showing up to class isn’t always easy, however. “It’s a scary time for them because they’ve been out for a while, and classes have changed so much,” says Jennifer. To calm these fears, Cornerstones uses a simple teaching method: the class doesn’t move on from any one subject until everyone has a clear understanding of it. Unlike high school or college institutions, there are no tutors available for extra help. It’s necessary for every student to have a clear understanding of everything so they feel confident and knowledgeable, and keep showing up for classes. “If they feel like they are getting behind they aren’t going to say anything about it and they give up,” says Jennifer, “That’s one of the primary things Cornerstone’s focuses on with each student that walks in their door. Regardless of where they come from, they want to encourage everyone to learn to the best of their ability. Jennifer says that working in groups has allowed for little families to develop among students. “For example, Somalis will help Hispanics , and they will both teach each other in their own languages, too.” These positive connections also encourage students to keep after their studies.

To maximize convenience for everyone, Cornerstones also offers a long distance learning program. This program allows students who can’t make it in for classes to learn the same coursework, but all online. The long distance program runs through the head office in Huron, while the Aberdeen location checks on students in the area. Students only qualify for the long distance program if they score high enough on their initial tests.
The journey some Cornerstones students make to get here is longer than others, and while some have come by themselves, others have come with their families and have kids enrolled in the public school system. It’s the encouragement from the kids that plays a big factor in the support parents feel while attending classes. One of the best things Jennifer has experienced since teaching at Cornerstones is watching her students grow in confidence. “It’s really exciting to watch students come in knowing hardly any English and then being able to help their children do their own homework.”

Working together has made a huge impact on the community at Cornerstones. Everyone helps everyone out in the learning process. “We don’t want anyone to stand out or feel bad for not knowing something. We always talk about how no one is discriminated against. Everyone who walks in here is on an equal page no matter how much they know.” Everyone works together because they are all after the same goals. Like the Aberdeen community, Cornerstones embodies that family feeling because everyone is there supporting one another. Jennifer states, “We are here to help diversity, and help the diverse groups that come and function with us. They aren’t here to work against us, they are here to be among us and be considered equal with everyone that’s in Aberdeen.” // –Karlie Spiry

Cornerstones also offers the Naturalization Test preparation classes for immigrants to utilize as they move towards permanent residency. “We help prepare them for the questions, and we work on how the questions are worded so they don’t get mixed up,” says Jennifer. Cornerstones does not administer the official Naturalization Test, they only offer prep classes.
Do you know the steps needed to become a naturalized United States citizen? The U.S. Citizenship and Immigration Services has several different resources on their website with all conflicting bits of information on how to become a naturalized citizen of the US. In an attempt to clarify the naturalization process, and for those who want a refresher on how this institution works, here are the steps to be taken by immigrants seeking to become naturalized citizens of the United States. For more information, visit the U.S. Citizenship and Immigration Services’ website at www.uscis.gov. 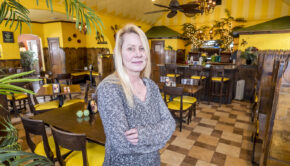 The Heart of Palm Garden → 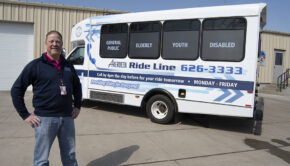 Could You Navigate Aberdeen Without Your Car? → 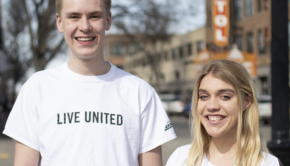