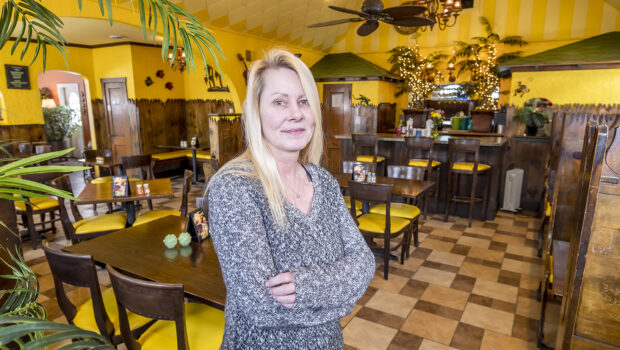 The Heart of Palm Garden

Situated on the corner of Third Street and Sixth Avenue South West is the Palm Garden Cafe and Chocolate Shoppe. The building is painted a sunny shade of yellow and features a sports memorabilia museum on the second floor. Appearances are deceiving, and those who went to the Palm Garden know that the cafe and chocolate shoppe were unlike anything else in Aberdeen. Bright yellow walls, hand carved wooden booths, eclectic mermaid statues, and a candy case over 100 years old were just some aspects of the eatery’s interior design customers found particularly striking.

Unknown by most folks, the Palm Garden Cafe and Chocolate Shoppe didn’t start out as a restaurant. In fact, before the chocolate shoppe sold any sweets of any kind and before the restaurant was even added onto the building, it was a corner grocery store. The original owners were Albert and Pauline Klabo, who opened the corner grocery in the 1910s. It was called Sanitary Grocery. The grocery store also featured a walk up ice cream service that few remember going to to get a tasty afternoon treat in the summer. Looking to expand their business in the early 1930s, Albert and Pauline added the Palm Garden iconic log-style Cafe onto the grocery store, and for over 20 years, they worked side by side, serving their famous southern fried chicken to their customers. Albert passed away in 1956, leaving Pauline to run the restaurant and grocery store with their son, Marlin, and her sister Emma Schock. In 1958, long time employee Gary Jasmer would join the Palm Garden family and would work there for nearly 30 years.

For a long time, the Palm Garden House of Chicken was the local name of the restaurant because the signature dish was a big, heaping plate of fried chicken served with coleslaw and fries, and it would only cost you 25 cents, 35 cents if you ordered all white meat. Another classic crowd favorite was their onion rings. Both their fried chicken and onion ring recipes came from the south, and were closely guarded by Pauline as the secret to their success.

Dedicated to a good time and serving the best food around, not much changed at the Palm Garden in the initial 50 years it was in business. During the ‘60s, parking was first prohibited on Sixth Avenue, which had a dramatic effect on the business’s final years of operation. It wasn’t until Pauline’s passing in 1983 that the Palm Garden closed and was placed into a trust. Pauline’s son, Marlin, died two years prior in 1981 at 54 years old. Over the next twenty years, the building would play host to Lauinger’s Country Store, an antique shop owned and operated by Gloria and Dick Lauinger. The antique store was successful for many years, and when the trust expired, everything in the Palm Garden went up for auction, including the building.

Karla Stangl grew up on the same block as the Palm Garden, and spent nearly every afternoon of her childhood there. With a deep passion for the Palm Garden, and a love for Aberdeen history, she set out with the intention of buying the building and business at the auction. She successfully acquired the business and as a bonus, the beloved candy display case, but the building went to Carlyle Mardian. Determined to bring the Palm Garden back to life, Karla struck up a deal with Carlyle. She would run the cafe and chocolate shoppe downstairs, while the newly built second floor of the building would become the home of Carlyle’s sports memorabilia collection. While not everything Pauline and Emma established survived the rebirth of the restaurant in 2007, Karla made sure to keep some things the exact same way. “We did everything by paper and pencil,” Karla says. And while the menu included items a little more complex than fried chicken, like paninis, steak, and pasta dishes, the heart of the Palm Garden remained the same. The wooden booths that Albert Klabo carved for the restaurant back in the ‘30s were used until the very end, and hundreds of hand carved initials and messages could still be traced and read by patrons until the dining room was closed to the public due to COVID-19 social distancing restrictions. Karla says, “People would get engaged here quite often. I can’t even count how many times I’ve had older couples come in and find the booths where they got engaged, and they would see their
initials there.”

For the past twelve years, Karla enjoyed moderate success until recently. During the COVID-19 pandemic, the Palm Garden was forced to close its doors indefinitely. Time will tell if the restaurant will reopen again. In the meantime, they are entertaining options to sell the business to a history minded person. “We are looking for a buyer that also wants the Palm Garden,” says Karla. Karla fears that with the Palm Garden gone, a part of Aberdeen history will be lost forever. “I’m not in this to make money and be rich. I love this place and want Aberdeen to enjoy it for years to come.” // –Karlie Spiry

Before he was famous, Spencer Tracy lived in Aberdeen for a time. Originally born in Wisconsin, his parents sent him to a good midwestern town in his adolescent years to keep him out of trouble. His aunt, Jane Feely, lived in Aberdeen on South Sixth Avenue. He also had a relative in Ipswich named Frank Tracy. Having visited Aberdeen several times starting in 1910, Spencer would come for short periods of time to spend with family. But in 1917, Spencer got a delivery job at the Sanitary Grocery store for the summer. This was years before he was an Oscar winning actor, or romantically linked with superstar actress Katherine Hepburn 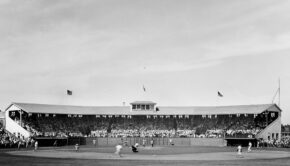 ‘Nuff Said: Reedy Fossum And The Heyday Of Smittys Baseball →

The Hardware Man: Building A Community To Last →