Events
The Questers: To Preserve and Restore
By Karlie Spiry | May/June 2020 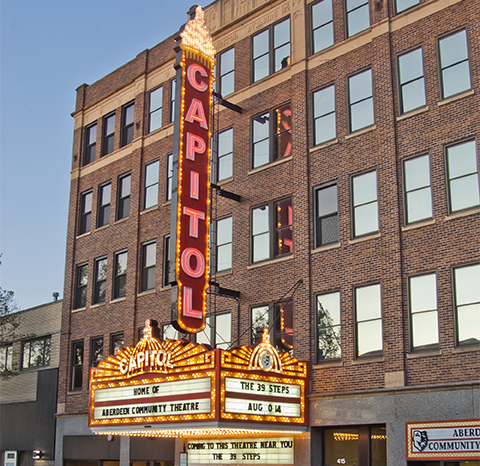 The Questers of Aberdeen are dedicated to preserving local historical landmarks for everyone to enjoy.

What’s one of the best ways to celebrate summer? Getting outside and enjoying nature’s beauty of course! Gardens have been known to bring joy to almost anyone who steps foot in one, and when the Questers began the Garden Walk back in 1994 with the intent to raise funds for the Capitol Theatre, enjoying beautiful gardens became a bonus. The annual Garden Walk event has become a summer highlight for many horticulture enthusiasts who want to see how community members have designed their gardens. Five gardens are chosen across town, and some years, the Garden Walk has included public spaces such as the Kuhnert Arboretum and NSU’s Sculpture Garden. Flower, vegetable, and rock gardens have been featured at some community members’ homes over the years. More recently, landscaping has become a popular feature.

This year, the Garden Walk will be held on June 25 from noon to 7:00 PM. As tradition calls for, five gardens, all of a different variety around the community of Aberdeen will be on display for event goers to visit. Tickets will be available after June 1, pandemic permitting. Locations to purchase tickets will be announced later. As part of your ticket, enjoy the afternoon tea being hosted by all three Questers chapters at the Capitol Theatre.

And just who are the Questers?

“It’s fun to search and a joy to find.” This is the motto of the Questers, an international organization dedicated to preservation and restoration of historical community landmarks. The Questers originated in Pennsylvania in 1944 when Elizabeth “Bess” Bardens bought a syrup pitcher at an antique shop over her lunch break and brought it to work with her. According to the official Questers’ website, this syrup pitcher sparked so much conversation and interest, it inspired Bess to hold regular luncheons featuring discussions about antiques and collections. From these meetings, 697 chapters across the United States and Canada have formed to make up Questers, with some 11,000 members. But what does this have to do with Aberdeen? Out of the 12 chapters in South Dakota alone, Hub City is home to three of them.

Stepping back into 1972 for a moment, a group of 21 women in Aberdeen who all shared an interest in antiques and historical knowledge formed the Dakotah Prairie Chapter of Questers. Although they seperated from the international organization to support the Dakotah Prairie Museum and several other community organizations, the rising popularity of the Questers across the state prompted the ladies to rejoin the official organization in the early ‘80s. This led to the chapter being renamed to Dakotah Pasque #539 in 1981, and finally changed to Land of Oz #1001 in 1986. Due to the club’s rising popularity, two more chapters were organized in Aberdeen in 1991. Paying homage to L. Frank Baum, the other two chapters’ names are Wizard of Oz inspired too, one being Yellow Brick Road and the other Emerald City.

You may be wondering why there are three chapters in Aberdeen when they are all a part of the same organization? Longtime Questers and Land of Oz chapter member Carol Leach explains that there is a maximum number of 26 members each chapter can fill before it’s considered full. Each chapter meets with members monthly to share in antique finds and collections. Learning about local history, meeting fellow collectors, visiting preservation and restoration sites, and, through mini lyceums, expanding their interests in events, crafts, and art are all things the Questers do.

Together, the women of the three Questers chapters have worked to preserve some of the greatest landmarks of Aberdeen, including the stained-glass windows at the ARCC and Brown County Courthouse, and ongoing restorations at the Capitol Theatre on Main Street. Longtime Aberdeen residents will know that the marquee of the theatre, the awning of lights that now illuminates South Main Street during show nights, hasn’t always been a beacon for everyone to behold. A 1926 issue of the Aberdeen Evening Herald described the original January lighting of the marquee as, “[A] massive sign, crowned with a dome of a capitol towering 60 feet above the sidewalk, seen with its thousand lamps throwing out their radiance far down the street in either direction.” However, over the years, South Dakota weather had given the marquee a beating, causing it to rust and fall into disuse. The original cloth wiring from the late ‘20s was used until the late ‘80s when they stopped lighting the marquee altogether.

Jim Walker, then Director of the Capitol Theatre, approached the Questers to establish a partnership for the restoration of the marquee. Things began to take shape in 1994 when all three chapters, in cooperation with the League of Historic American Theatres, set an initial goal of $30,000 to be raised for the complete restoration of the marquee by the end of the 20th century. Their campaign slogan for this project read “Turn of the century, turn on the lights”, a testament to raising all the funds needed in the remaining years of the decade, century, and millennium. A core committee was created to oversee the plans pertaining to the marquee, with Nancy Aman serving as the chair of the committee. Jeanette Anderson, Lyla Bultema, Barb Frank, Mary Gederos, Sally Johnston, Jeanette Protexter, Ann Rassmussen, Bette Sandvig, Judy Westegaard, and Jim Walker made up the rest of the core committee.

To anyone who has started a project on a budget before, it may not be a shock to learn that the initial $30,000 estimate was not enough to restore the marquee. The final cost of the project ended up being around $100,000 more than that. This did not deter the Questers from reaching their goal. Through countless fundraising events, like selling one of kind prints of the marquee by nationally acclaimed Aberdeen-born artist Mary Gorder Groth, applying for state, federal, and international grants, and receiving $31,000 from community organizations and $18,000 in private donations from Aberdeen citizens, the Questers were able to reach their goal in 1997, just a few years before the deadline. After 71 years of decorating the outside of the theatre, the marquee was removed from the facade of the building in January of 1998, and transported to Maple Grove, Minnesota to be restored by the Pascual Sign Company, who had experience in restoring the Orpheum and State Theatre marquees in the Twin Cities, and came recommended from the League of Historic American Theaters. Later in May of that year, the completed sign was returned home to Aberdeen for a grand celebration on Main Street. Land of Oz Questers member and chair of the core committee, Nancy Aman was declared the “First Lady of Aberdeen” for her efforts in leading the core committee to being successful. Not only was the marquee restored to its former glory, it along with the Capitol Theatre were granted a national landmark status.

The three Questers chapters of Aberdeen have taken the initiative to continue their restoration efforts of the marquee and theatre. The initial restoration of the marquee was over twenty years ago, and the beacon of Main Street needs maintenance to keep it looking opulent and regal for everyone to enjoy. The proceeds from this year’s Garden Walk will go towards those goals. // – Karlie Spiry

For more information about the Garden Walk, contact the 2020 chairperson Crystal Bohle at 605.380.3776 or at crystalbohle@gmail.com

The Capitol Theatre is considered a movie palace! Built in 1926 in the French Art Deco style of opulence and grandeur, this theatre is approaching 100 years old. Movie palaces are not common these days, in fact, there are fewer than 70 across the whole country. In the early 20th century, over 4,000 movie palaces were built across the United States to meet the demand and delight of motion picture enthusiasts everywhere. As one of the only remaining movie palaces in South Dakota, the Capitol Theatre is just one of the landmarks that makes Aberdeen what it is today, a community dedicated to the arts.
Back in the early ’90s, Capitol Theatre restorations started to make the necessary accommodations for live theatre. This was the first stage of the theatre’s Improvement Campaign. The next phase of improvement included restoring “behind the scenes” areas for members of the theatre to work. The dressing room and scene shop both got a facelift, but what was perhaps the greatest improvement at the time was the updated electrical work. A new sound system was installed, along with custom made replicas of the Art Deco chandeliers that the Questers did the fundraising for. The third stage of the plan began in 2009 with the rebuilding of the lobby, concessions, and the purchase of a digital film projector and surround sound system for the theater.

Restoration work is still ongoing at the Capitol Theatre. To play a part in restoring local history or for more information, call ACT’s office at 605.225.2228, or email act@nvc.net.