People
A Vet Doesn’t Ever Just Grow Up That Way
By Robert P. McCue | July/August 2020 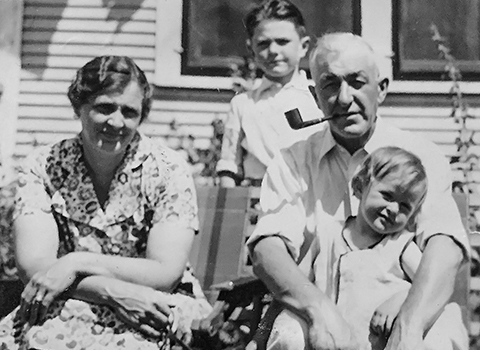 Yellowed newspaper articles and black-and-white photographs only just begin to tell the stories of exceptional country doc George P. McCue, who devoted his life’s work to caring for animals large and small and the community that surrounded them. 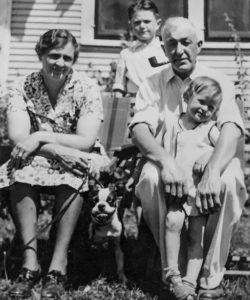 George, Mae, Celia and Bob McCue sitting outside on a sunny day circa 1936 at the McCue family home located 1220 North Washington St.

In 1942, Dr. George P. McCue penned an editorial for Bit and Spur Magazine headlined, “A Vet Doesn’t Ever Just Grow Up That Way.” He wrote, “few occupations demand such a diversity of qualifications as the practice of veterinary medicine.” From 1920 to 1961, Doc McCue dedicated his diversity of expertise to the caretaking of Aberdeen’s animals and, in the process, became both influential and beloved in his adopted hometown.

The second oldest of seven children, five boys and two girls, George was born in 1887 to Lawrence and Catherine Rooney McCue in Lake Geneva, Wisconsin. The family moved to Milwaukee in 1897, where they were often visited by his mother’s brother, Henry Rooney, the chief draught horse wrangler of the Ringling Circus. As “Boss Hossler,” Uncle Henry was responsible for the entire team of horses that pulled circus wagons and engines as the extravaganza traveled from stop to stop across America. Watching his uncle’s skill with those sturdy beasts, George’s imagination and interest in animals came alive. He became the lucky kid who got to travel with the circus for several seasons, observing and assisting his uncle and experiencing the life of an animal medic.

In the early 1910s, the lure of the big city pulled George to Chicago. He enrolled in McKillop Veterinary School in 1912, studying and attending class by day and working as a coal shoveler during the evenings. As his son, Robert Sr., (Bob) later wrote, George was fiercely proud of his eighth-grade education and “graduate study at the University of Hard Knocks on the streets of Chicago.” As an echo of his circus days, George reported that he especially enjoyed treating the engine horses of the Chicago Fire Department in his medical rotations. In 1916, George became Dr. McCue upon graduation from McKillop.

Like so many men of his day, George was drafted into the U.S. Army shortly after graduating. Fresh out of veterinary school, the young doctor’s skills were in high demand to treat and care for the war horses that pulled artillery, ambulances, and supply wagons behind the Allied battle lines during World War I. He was honorably discharged six months after the war came to an end and set his sights on the American West to establish a new life.

Aberdeen, a town of three thousand people in 1919, became Doc McCue’s new home. George became acquainted with Dr. Elliott and his family, who ran the local veterinary hospital, and was made a partner in the practice not long after he received South Dakota veterinary license number 333 in 1920. As a partner, George tended to the needs of all manner of local livestock and pets, from quarantining cattle afflicted by anthrax to treating family dogs for rabies. He became a fixture at the weekly Brown County Sales Barn, where he tested and inoculated horses, cows, and hogs. After several years of partnership, George went into business for himself and opened his own clinic in the Lacey Ice Cream and Dairy building on Fourth Avenue.

While Dr. McCue was thoroughly occupied with the obligations of a country vet, he also courted Miss Mae Tierney, a schoolteacher in Chicago. Their long-distance relationship was made possible thanks to the direct line of the Milwaukee Railroad to Chicago. In 1925, George and Mae were married at the Holy Name Cathedral in Chicago, and the young couple moved into Aberdeen’s plush Dorian Apartments. As both the family and the veterinary practice grew, the McCues built a house on fifty acres on North Washington Street, their one and only home as Aberdonians. They raised horses and other small animals, as well as vast fields of hay.

Although George was named the president of the South Dakota Veterinary Association in 1929, he and his family were not spared the hardships of the Great Depression any more than their neighbors. To add to the strife of the Depression, the early 1930s brought incredible drought to Aberdeen. Farms and businesses were lost, families were pressed from their homesteads, and George was forced to move the Fourth Avenue clinic to his home. During those lean days, George would often accept chickens, cows, and other animals in lieu of money as payment for veterinary services.

Happily, the three McCue children, Eugene, Bob, and Celia, were fond of being raised in an animal hospital. All three kids developed talent and kinship with animals, horses especially. With the help of their parents, young Bob and Eugene spent their youth raising, training, and selling ponies. The McCues had enough acreage at their home in the Highlands district of Aberdeen to raise the ponies, which they would sell to local kids. George and the kids often spent time in Wylie Park, with Bob offering pony rides to the Girl Scouts and George offering his services to families who brought their horses, dogs, cats, and other pets to the park for exercise and vet consults.

A 1939 Aberdeen American News article touted eighteen local kids, ranging in age from twelve-year-old Eugene to four-year-old Celia, as the “only pony patrol of its kind in the world.” The troupe was a feature attraction at the Independence Day celebrations in Aberdeen that summer, showcasing jumping skills, cavalry stunts, and, in the words of the reporter, “a hatful of tricks which are ordinarily seen only with big time circuses.” The Pony Patrol was organized by Doc McCue and sponsored by the Elks Club.

Beyond their skill with horses, all the members of the McCue family were known for their community involvement. Doc McCue was almost constantly on-call for local and regional needs, when not on the road to state and national veterinary conventions. He served not only the community of Aberdeen and Brown County, but Marshall, Spink, Day, Clark, and Edmunds counties to name a few. He was a local member of the Knights of Columbus, Elks Club, and a Boy Scout leader.

Mae McCue was a skilled teacher and school principal in the Chicago school system before her marriage brought her to Aberdeen. She was a prolific philanthropist, having helped found the Aberdeen chapter of the Catholic Daughters of America in the 1930s. She was highly active in the Sacred Heart Parish Alter Society, Bonne Foi, ETW Study Club, and several other community service organizations. In 1952, she campaigned for the public office of Register of Deeds. Though unsuccessful, her bid was another indication of her devotion to community service.

In 1942, thirteen-year-old Bob McCue hitched his ponies, Buck and Dolly, to a collection wagon and rode around town with his friends soliciting iron scrap donations in a drive to help support World War II efforts. His community service earned him a write-up in Bit and Spur Magazine, with the reporter advertising that “if you want a horse broke, call on him.”

In their rare downtime, Mae would take their children to the family cottage on Lake Enemy Swim, and George would join them when his practice would permit. George sold the cabin in 1959 to the Bossley family, who owned a farm just south of Aberdeen. For years, they had called on Doc McCue to attend to the care of both their farm animals and family pets. When George put the cabin up for sale, the Bossleys became the new caretakers.

As an adult, Bob later wrote in a family history that, following World War II, George “had many good years practicing his life’s vocation.” With his encyclopedic knowledge of veterinary medicine, nutrition, surgery, immunology, obstetrics, pharmacology, and husbandry, Doc McCue had become an indispensable Aberdonian and a dear friend of so many farmers, ranchers, and families.

In 1959, Mae died suddenly of a heart ailment at the age of 63. George was so stunned and grief-stricken by the loss that he lost interest in his career and retired from medicine two years later at the age of 74. The South Dakota Veterinary Medical Association recognized his contributions to both the practice and his community when they honored him with a lifetime membership in 1965. George spent the next few years of his life traveling the country to visit his children and grandchildren, and in 1969, he took rest next to his beloved Mae in Aberdeen’s Sacred Heart Cemetery.

Considering the sheer breadth of his skill and the depth of his relationships within the community, George certainly embodied the archetype of the wise, weathered country vet who “didn’t just grow up that way.” Though he studied for four years at McKillop Veterinary School, the bulk of his education came from decades of serving Aberdeen. Imagine all those long, midnight hours in birthing sheds, pulling calves and foals that did not want to come. Or picture the mingled trepidation and determination of a young vet corralling anthrax-infected cattle for quarantine. His dedication to a lifetime of such demanding work, dodging mule kicks and dog bites along the way, speaks to an innate, outright love for his vocation. // –Robert P. McCue

The author, Robert McCue, is interested in any memories or stories about his family and their time in Aberdeen. If you have a story, you can email him at rpmccue@eagless.net. 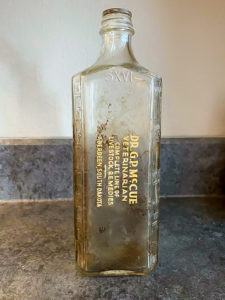 Message on a Bottle

Casey Klum unearthed this glass medicine bottle while cleaning stalls at his barn in Ferney, SD. When Klum posted a photo to an Aberdeen history Facebook group, fellow member Bob McCue, Jr. recognized his grandfather’s imprint. The two men connected, and a bit of Aberdeen’s past came full circle.