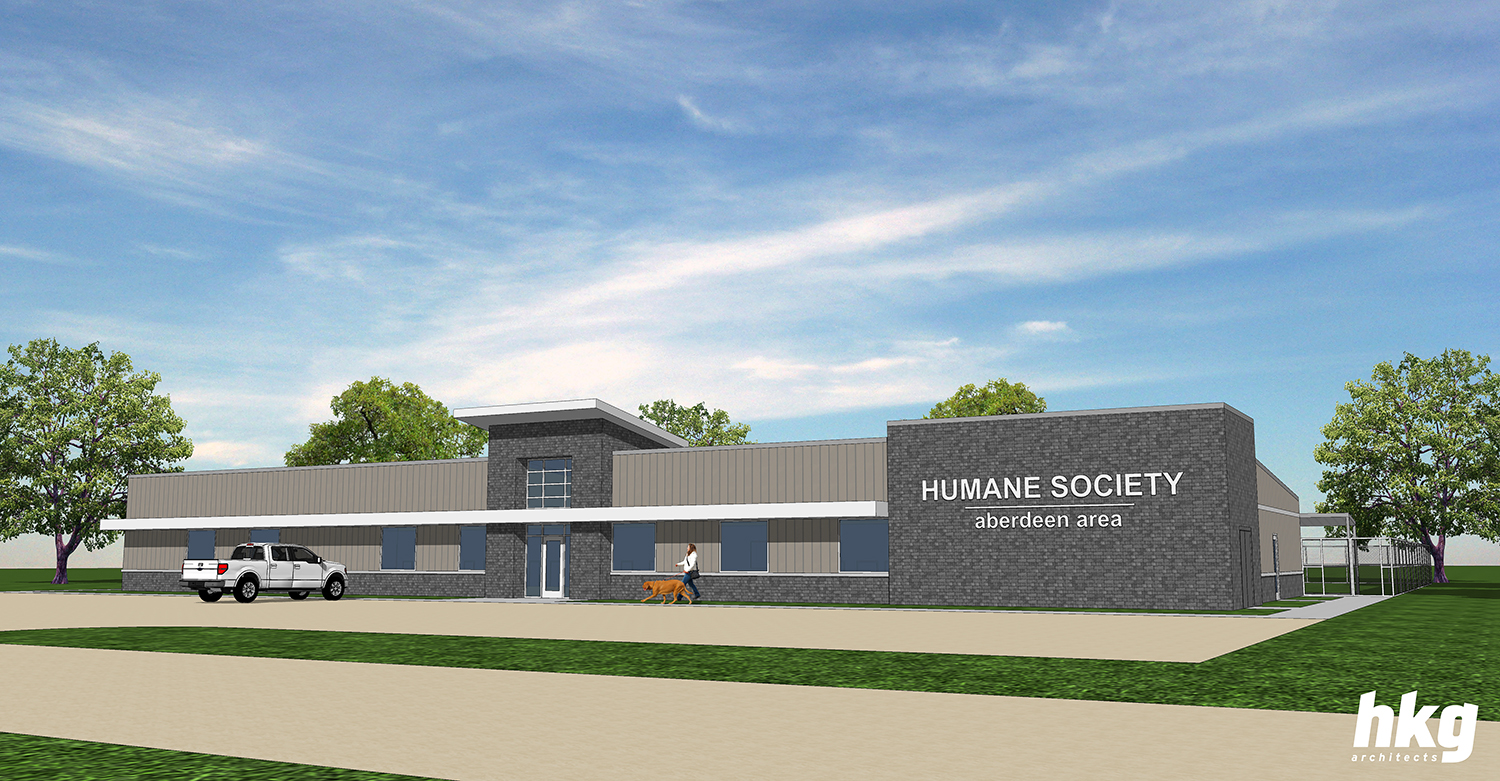 The Aberdeen Area Humane Society (AAHS) has been serving homeless animals Aberdeen and the surrounding area since 1982. In 2019, they launched their $1,000,000 campaign to build a new shelter on the current property, and as of May 2020, $400,000 of that goal has been raised.

According to the ASPCA, over 6.5 million companion animals come and go from shelters across the United States. Of that total, 3.3 million are dogs and 3.2 million are cats. It’s estimated that over 3.2 million shelter animals are adopted each year with 1.6 million being dogs and the other 1.6 million being cats. Some stray animals are lucky enough to be returned home; 710,000 strays are returned to their owners. The ASPCA reports of that number 620,000 are dogs and only 90,000 are cats.

Shelters play a significant role in saving animals by getting them off the streets and providing them medical care, shelter, and love. In Aberdeen, the community and animals alike are lucky to have the AAHS to be a safe place for these pets. Afterall, the AAHS’s mission is to shelter homeless animals, place animals into good homes, and rescue animals from abusive situations. Since the early ‘80s, that mission has steadfast remained the same, but the building that houses these animals is a different story. One that’s changed and will continue to change to fit the needs of the homeless and unwanted animals in the Aberdeen community. Elaine Schaible, the Shelter Manager of the AAHS, knows that the current building is passed its prime and a new set up is needed to keep the shelter running safely for all the animals.

For its first four years in operation, the late Dr. Bill Svensen allowed the AAHS to use kennels at his veterinarian clinic and to adopt homeless animals out from there. Things changed in 1986 when Dr. Albin Janusz leased the land the shelter sits on currently to the AAHS for a small fee (by the year 2000, the 2.5 acres of land were later donated to the shelter by Delphine Janusz). A trailer house was placed on the land and a cat room and dog kennels were constructed in in 1986 as well. “Operations started out of the trailer house,” Elaine says, “our office currently resides in the building donated by George Meyer in 1989. That building first replaced the trailer house.” By 1992, 12 dog runs with cement floors were built on the outside of the southside of the building, and in 1998, a large exercise area was installed on the growing complex. In 2009, the addition of a laundry room, 14 dog kennels, and a cat isolation room brought some much-needed space for the shelter to control the spread of diseases among its feline population. The Richard W. Marsfield Estate donated the funds for the construction of a roof to be built over the outdoor dog kennels in 2013. The last major update the facility received was in 2015, and that was the addition of ‘catios’, or outdoor areas for cats. Currently, the shelter has 31 dog kennels and 15 cat kennels for the pets that are ready to find their furever homes.

Most of time, it’s just cats and dogs who take up residence at the AAHS, but the shelter is no stranger to unconventional pets like birds, chickens, guinea pigs, hamsters, gerbils, snakes, fish, chinchillas, rabbits, rats, and turtles. “We were asked to take in a pet skunk in the past, but we had to decline on that one as we don’t carry the correct licensing for it,” says Elaine. At the time of this interview, only three dogs and 25 cats were living in the shelter. “It is extremely rare for us to have this few pets in our care! We saw a huge spike in adoptions through the month of April – social distancing has its benefits,” Elaine says. The AAHS hopes this trend continues when daily routines are restored for public life. “Under normal circumstances, we would reach out to our rescue partners and notify them that we have room for additional pets. However, the veterinarians who work with us are forced to limit their services because they are having trouble obtaining supplies like gloves, masks, etc.,” she says.

Even with the additions to the building over time, the whole structure needs to be replaced in order to increase and maximize the security, comfort, and health of the homeless animals that find their way to the AAHS. The current shelter is made of the original building, which was moved onto the property almost 40 years ago. “With a bit of ingenuity and a ton of passion, we made this unique setup work for many years, but it is becoming cost prohibitive to maintain and repair,” says Elaine. Over the past few years, the building has demanded major repairs including broken pipes, a failing water heater and air conditioner, worn down shingles, and crumbling brick dog kennels to name a few on the long list of things broken down in the facility.

Preventing the spread of illness is a high priority for staff and volunteers at the AAHS. Just like humans, and just as we have learned recently, pets can contract and spread very contagious diseases between each other. “We are really good at cleaning and we do our best to “social distance” or isolate animals from one another when they are sick,” says Elaine. However, this is hard to do with no isolation rooms for dogs and few isolation rooms for cats. The ideal set up for the AAHS would be like that of a hospital: a specific entrance for the intake of homeless animals in which the vaccination history of the animal is unknown, an HVAC system that filters the air regularly, all surfaces in the building would be able to be disinfected and cleanable, and an isolation ward for both cats and dogs to help control the spread of diseases.

The plans for the new facility will address all these needs and more. Designed by HKG Architects, the new shelter will have 7,400 square feet of space that is optimized to the flow of traffic and keeps operational efficiency in mind for the employees and volunteers. The new dog area will feature spacious kennels with indoor and outdoor access for dogs to have plenty of room for exercise. The cat area will be located away from the dog area to ensure the least amount of stress possible for them. The cat area will also be expanded so the shelter can increase their intake of felines. Additionally, separate isolation wards for cats and dogs will also be a part of the facility, and there will also be rooms designated for education and adoptions. Adopters will have the chance to spend more time with the animals in bigger rooms.

The AAHS is always looking for donations from the public. In fact, the animal service depends on the generosity of individuals and businesses alike to keep running. Elaine wants the Aberdeen community to know, “The AAHS receives no city, state, or federal dollars or financial support from national humane organizations to conduct operations.” If community members would like to donate, they have several options to choose from to make sure their donation is being utilized in the way they want. The general fund option goes towards routine operations and care of the animals and includes animal food, staff salaries, utilities, and insurance. A second option is Chloe’s fund, which was created in memory of an animal abuse case in which major medical surgery was required. The money donated to this fund specifically goes towards the medical expenses and care of the animals at the shelter. The third option is the building fund itself, in which donations go towards the new building. The AAHS also offers a membership program and sponsorship of a kennel as two ways to support the shelter. More information on these programs and donation options can be found on the AAHS’s website, www.anewleashonlife.net, or donations can be directly sent to PO Box 1013, Aberdeen, SD 57401. // –Karlie Spiry