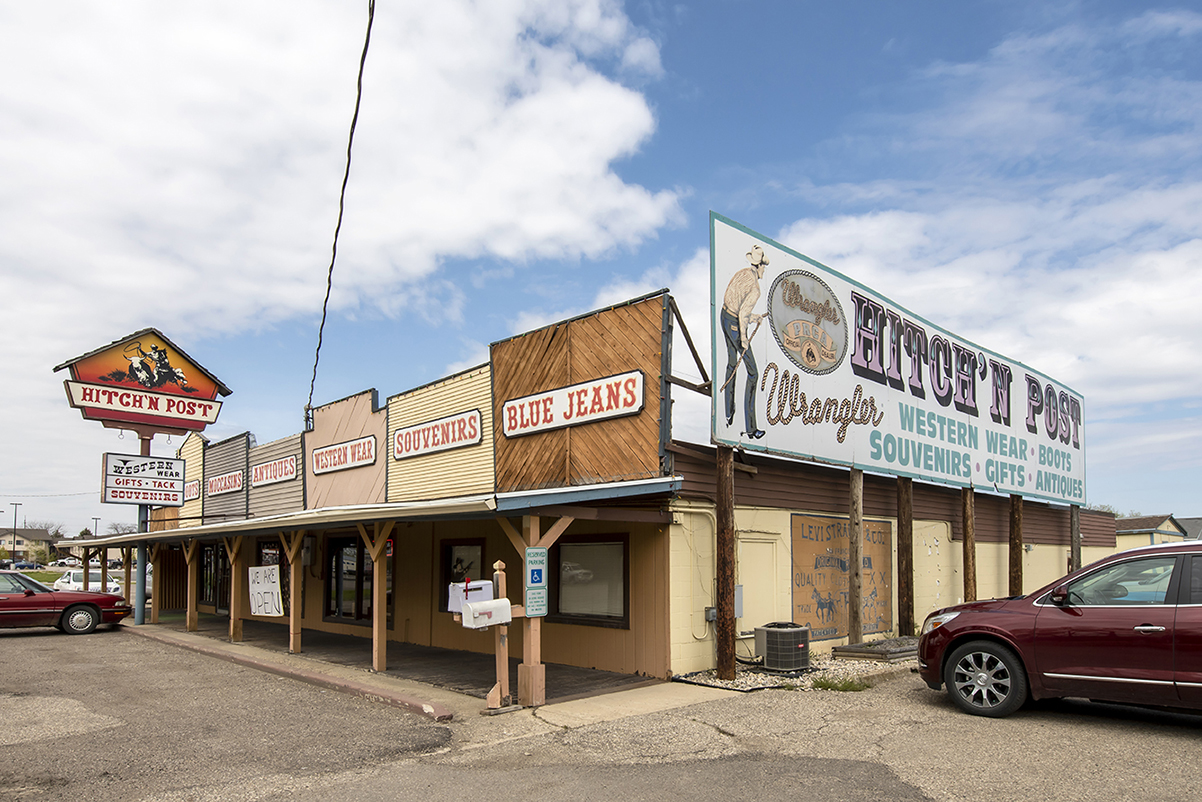 Hitch’n Post is celebrating 50 years of successful business in Aberdeen.

Sixth Avenue is dressed in all kinds of businesses these days, but one business on the east side of town sticks out in particular. It dons an old western exterior that looks like something straight out of a John Wayne film rather than a retail store. Rustic designed western billboards, murals, and signs featuring cowboys in their element stamp the exterior of the building. It’s clear that Hitch’n Post is not just any retail store. Looking more like a tourist attraction you would see in the Black Hills than a store in Aberdeen, this western wear store has caused many a cowboy to “tie up his horse at the door” and take a gander inside. Once inside, there is a great variety of things to shop for. The store isn’t just for cowboys either. Patrons of Hitch’n Post can expect to find quality clothing for every occasion. Western clothing has evolved for everyone to wear. It truly is a crossover style. Terry and Pete are happy to also offer a selection of antiques, footwear, jewelry, purses, hats, colognes and snacks for your favorite farmer’s wife or city slicker. Not to mention you’ll walk away with the satisfaction of shopping local and supporting an Aberdeen small business.

Hitch’n Post has been a staple western store in Northeastern South Dakota for the past 50 years. In fact, at one point, it was the biggest western store in the state, and the store sported that slogan to boot. Now, the store sports the logo “Quite Possibly the Coolest Store Ever.” Longtime owners Terry and Kathryn “Pete” Larson have managed the store together since the ‘80s. Terry, along with George Lemer, actually bought the business from John and Bobbie Pagones in 1983, but more on that later.

In the ‘50s, John and Bobbie Pagones owned P & H Bootery, a shoe store on Main Street. 1958 was a big year for western wear so much so that John and Bobbie opened Western Corral, a retail store dedicated to the western fashions of the time. The new western store was an instant hit among the farmers and ranchers of Northeastern South Dakota. The only problem was that not all their customers could reach the Main Street location. Larger trucks and horse trailers were not exactly the easiest to maneuver on the small street. And so, in the ‘60s, John and Bobbie opened another western store on the east outskirts of Aberdeen. This business was called Hitch’n Post. The location used to be an old gas station and used car lot, but to John and Bobbie, it was the perfect place for where their dreams could grow. People thought that John and Bobbie were crazy for locating so far out of town. The location would end up paying off though, because what was the far edge of town back in the ‘60s is now the main strip of Sixth Avenue today.

Originally from Watertown, Terry received the best advice he’s ever heard from his friend and former employer Jim Miner, who said, “If you take care of your business, your business will take care of you.” Terry has carried this advice with him in every business venture he’s taken, and it’s definitely paid off. After graduating from Northern with a degree in Sociology and minors in Psychology and Business, Terry didn’t put roots down in Aberdeen right away. He traveled to California for a taste of life on the west coast. “I quickly found out California living wasn’t for me, and I came back to South Dakota,” he says. He left the surfboards and busy city life behind for the solace of small-town living.

As the only retail business on the east side of town at the time, Hitch’n Post was doing great. It was in August of 1970 that Terry came to work for John Pagones. Before that, Terry was operating a small dry-cleaning business in Aberdeen that John was a customer of, but Terry wanted more out of life. “I wanted to work in a more interesting place, and when I realized John was the owner of Hitch’n Post, I joined the team,” says Terry. Kathryn who goes by the nickname of “Pete” from her maiden name Petersen, hails from Doland and she graduated from Northern in 1973 with a degree in Elementary Education. But her career wasn’t meant for the classroom. Pete says, “I was the 13th person hired at the Aberdeen Kmart, and I worked there for 11 years.” While Pete was still in college, she met Terry through her roommate. They hit it off and became partners in life and eventually business. Pete eventually came to work at Hitch’n Post in 1987, and she’s been there since.

In the early ‘70s, the store was already 4,000 square feet in space, but with business booming in 1973, an additional 2,000 square foot expansion was added to the store. Expanding the retail store didn’t stop there. In 1976, John and Bobbie added another 3,200 square foot room making the total space a staggering 9,200 square feet. Hitch’n Post then became one of the largest independently own retail stores in Aberdeen, and the largest western store in the state for a time. In 2015, a car drove through the oldest part of the store, the lady’s department, and put that section out of commission for a few months. The incident was an opportunity for renovation and upgrades. Many people are shocked at just how big the store is when they walk in because it seems small from the outside, but it is indeed a big store with big heart.

Pop culture usually has an influence over retail sales, and for Hitch’n Post, this big influence came in 1980, when the movie Urban Cowboy premiered and became a hit. John Travolta and Debra Winger star in the film, and their character’s influence over western style fashion had significant effects at the store. Everybody wanted to be a cowboy just like in the film. At the same time, the Northern Border Pipeline was being built near Aberdeen. “The workers bought tons of merchandise from the store,” recalls Terry. It would be this business boom that would encourage Terry to buy Hitch’n Post from the Pagones, and he did so with his business partner George Lemer in 1983.

Challenges came quickly as the economy dipped in 1983 and interest rates took a jump. A lot of farmers and ranchers went out of business, and this had a negative impact on business for Hitch’n Post. Both Terry and George feared that the cowboy craze was over, and the store would go out of business. In 1987, Terry bought out George, and Pete came to work at the store. Together, she and Terry have been working side by side ever since. They both always had a love for western wear and South Dakota style, and going to work together has been fun for them. Over time, business and the economy gradually improved. “I credit our continued success to our many great salespeople we’ve had over the years,” says Terry. 1990 became the year that Hitch’n Post would cement its permanent status as an Aberdeen icon. The Lakewood Mall opened, and not only did it help increase business for the western store, but it also increased business for Aberdeen in general. Sixth Avenue became the hot spot for business, and as Terry says, “All those naysayers back in the ‘60s were proven wrong.”

Being a family owned business has helped set the western wear store apart from the rest. Some of the first things that people notice about the building are the signs and murals. They have been up as long as Terry and Pete can remember. The Levi’s sign on the west side of the building was actually painted by Terry’s own brother. Terry and Pete’s two daughters worked in the store at one time or another. Currently, their daughter Alissa works in the store. Since coming to work for her parents, Alissa has updated the store to a computer system from the old paper system. Before that, everything, even their receipts, were handwritten. Alissa also runs the Hitch’n Post Facebook page and has created a close community of western wear lovers through it. Terry says that it may be time to think about retirement, but Pete teases that he is already semi-retired because he gets Sundays off so it’s not quite Alissa’s turn to take over the family business just yet.

Over the past 50 years, Hitch ’n Post has earned itself a rich history. A celebration for all the good times is planned for September. They are not sure of all the details yet, but they plan on 9 to 10 days of great deals in the store. Don’t think you have to wait until then to get great offers! Hitch ’n Post always has great deals and bargains in store for customers. // –Karlie Spiry

Hitch’n Post is open Monday through Saturday from 9-6 and on Sunday from 12-4. For more information about the upcoming celebration, be on the lookout for upcoming advertisements or Facebook posts about the event.