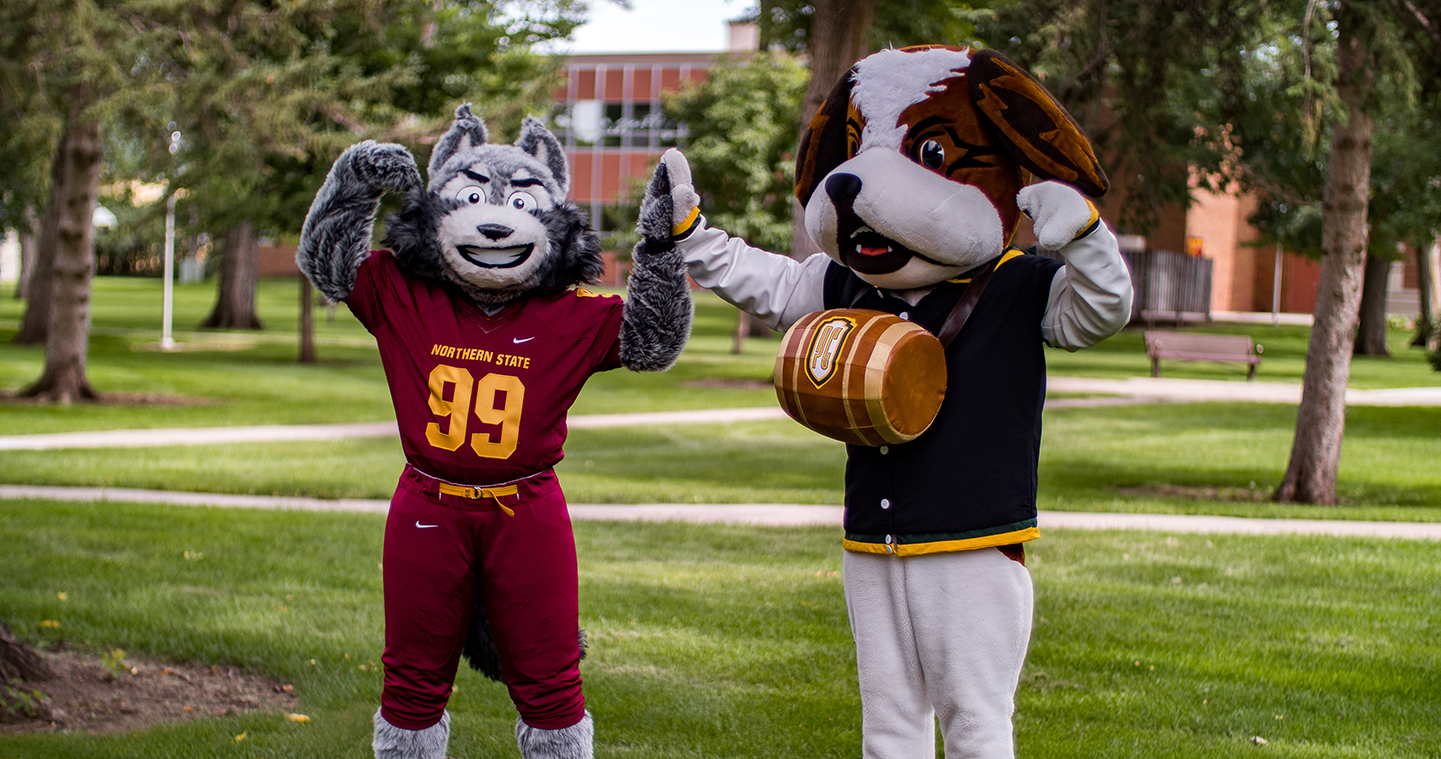 Whether they’re on the sidelines, at a sporting event leading the crowd in a cheer, or welcoming students to the first day of class, mascots play an integral role in college life. Here, we’ll meet Aberdeen’s collegiate mascots and find out how they became symbols of our community.

NSU’s wolf as you see it today is Thunder, a fierce and focused mascot. Thunder was born in 1993 when alum Thomas Gross beat out 64 other entries in a public contest to create a logo for the university. In 2010, Josh Phillips refreshed Gross’s original design, and the forward-looking wolf has been the face of NSU ever since.

But this mascot really goes back much further. In the early 1920s, the school’s newspaper announced a contest to identify Northern Athletics. While they didn’t receive any entries, the men’s basketball team voted to call themselves the wolves. The name stuck. As the story goes, the team had just come off of two losses on the road, and after adopting the wolf mascot, they won their next game.

Then in 1954, another contest was announced, this time to formalize the mascot. The NSU Art Department entered the winning entry, “Waldo the Wolf.” Waldo was more cartoonish in appearance, a stark contrast to the determined Thunder. Rumors have circulated that Walt Disney sent the university a letter asking them to cease the use of Waldo as it infringed on a trademark they owned. But it has never been confirmed if such a letter was really received from Disney or if it was a hoax. Nevertheless, Waldo was replaced by Thunder, but he does make an occasional appearance on the “heritage” or “throwback” series of NSU apparel.

The costumed Thunder who energizes the crowd during sporting events is played by NSU students who apply for the position. One of the mascot’s main jobs is to interact with young NSU fans. Outside of Northern athletics, Thunder goes trick-or-treating downtown and helps with the crosswalk at May Overby Elementary. When you see him dancing on the sidelines, or playing jokes on NSU’s president before a game, it’s likely student-athlete Zach Bohenkamp behind the mask. Zach is in his second season of playing Thunder, that is when he isn’t playing on the football field himself. He says the best part of the job is getting fans of all ages involved in the game. “The kids are always super happy to see Thunder or get high-fives from him. It makes sporting events a better experience for everyone because even if they don’t understand what’s happening in the game, they still have something fun to look forward to and to keep them entertained.” 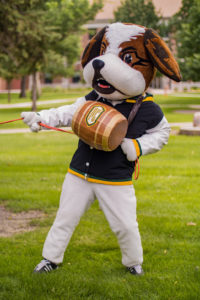 Presentation College now has two mascots, but before 2013, they had none. The college decided a live Saint Bernard would fit well with their athletic logo— “The Saints,” and in a spark of luck, around this same time, a community member in Aberdeen happened to welcome a litter of 13 Saint Bernard puppies. Enter Spirit, a now six-year-old, 125-pound, living mascot. At just a few months old, her first “job” was to hang out at PC’s booth at the Brown County Fair. She’s been out and about at Aberdeen events ever since.

Spirit lives with Stacy Bauer, Executive Assistant to the President at Presentation, but the college is her real home away from home. She comes to campus every day and spends time with different departments. And it isn’t unusual for her to be walking down the halls or wandering into classrooms. Everyone at PC can spend time with her or take her for walks, but like any dog, the real way to Spirit’s heart is through her stomach. “Really, what Spirit does all day is she lays around,” Stacy laughs. “She’s smart, though. She knows which offices have dog treats, and you can easily find her there. She also likes to go to the cafe whenever given the chance.” The breakfast sausages and bacon are two of her favorites from the menu.

Spirit has also figured out that if she takes her naps in the hallways instead of inside an office, that’s where more students will be and she can get some extra attention. She’s just the right height that students can walk by her and run a hand down her back, a subtle but comforting thing for someone living away from home for the first time and missing their pets. Most students have a Spirit story, too. She’s been caught on video snatching unattended sandwiches and also barking at classroom windows. As for her mascot duties, she attends athletic and booster events in the community and at PC. Stacy says, “She’s really everybody’s dog.”

A couple of years after welcoming Spirit, PC also added a costumed Saint Bernard named Bernie, short for Bernard. The person inside the Bernie suit is either a PC staff member or a student filling the role as a work-study position. At many events the mascots, Bernie and Spirit, work together to build school camaraderie. // –Jenny Roth