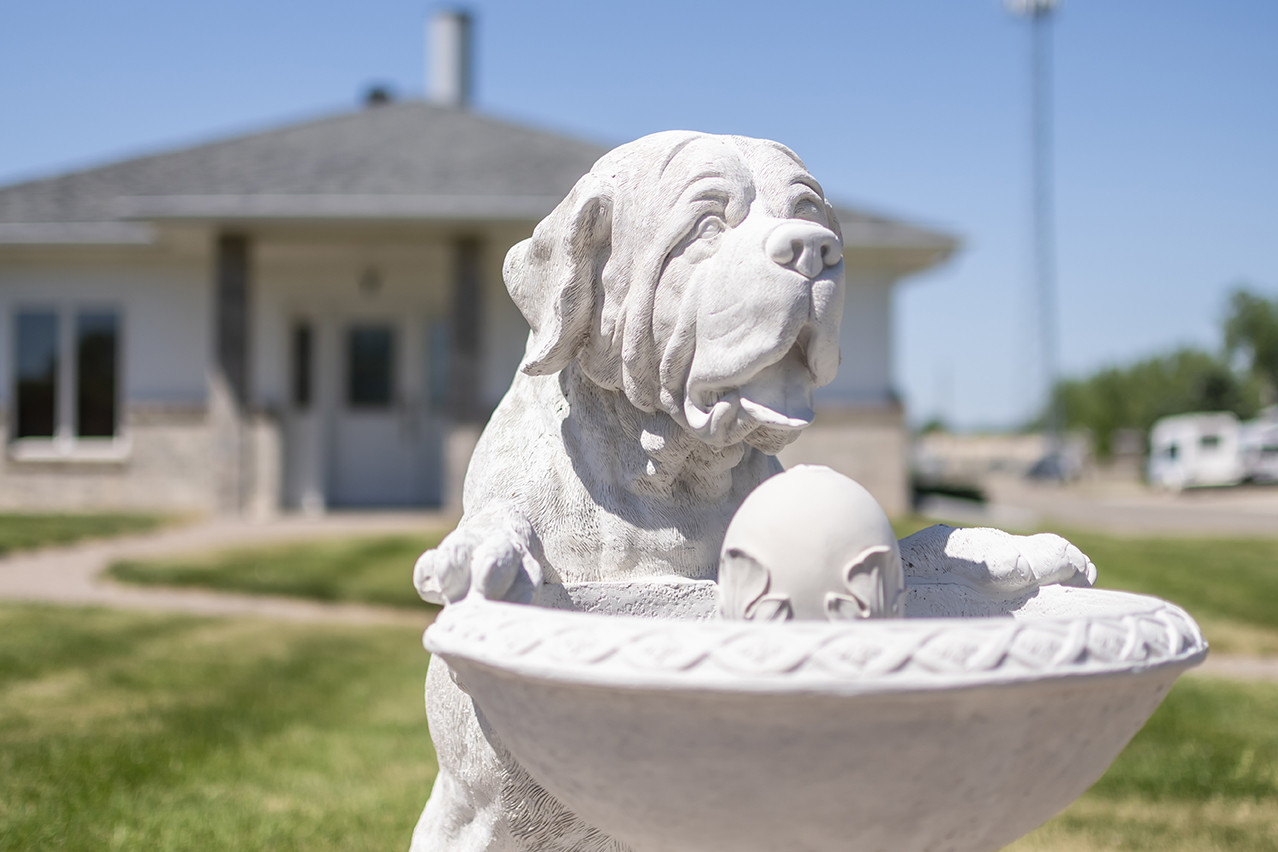 Crossing the Rainbow Bridge in Aberdeen

Most people have known a beloved pet and have also unfortunately lost a beloved pet. Since I moved to Aberdeen in 2005, I’ve lost a couple hamsters, but have not otherwise had any loss of a long-term pet in the intervening years. Looking over the course of my whole life, I have sad memories of times where I’ve had to bury some of my best furry friends. When my husband announced this issue would include a lot of stories about pets, I asked him if he thought it would be odd to write a story about pet loss. The more I talked to people about pet grief and loss, I discovered just how special the amount of love people hold in their hearts for the animals many of them affectionately called “fur babies.”

This love launched the creation of Pets at Rest at Schriver’s Memorial Mortuary and Crematory. Owner George Schriver was inspired by his family’s love of their myriad collection of pets. One portion of the facility is dedicated as a pet mausoleum, which currently is used just by the Schriver family. The mausoleum can also accommodate any community pets for a small ongoing maintenance fee and includes a nameplate for your beloved pet. Pets at Rest offers a number of other options for pet memorials, including a variety of containers or jewelry that holds pet cremains. The latter has become very popular today.

George remembers almost a decade ago when they made the investment in a crematorium dedicated to community pets. He wasn’t confident usage would follow, but at present, his family cares for the final disposition of an average 60 pets a month. They have handled every kind of pet imaginable, from a miniature horse (at the upper limits of the crematorium’s capacity) to a pet fish. Other pets entrusted to Schriver’s care beyond the more common cats and dogs include snakes, hamsters, bunnies, guinea pigs, and birds. George and his family understand what it feels like to lose a furry family friend and have dedicated themselves to helping you through your initial grief process.

Some of the pets that arrive at Schriver’s come from Cooper’s Animal Clinic across town. Dr. R.D. Cooper, the owner of Cooper’s, described his experiences with helping families grieve loss over the years he has been in business. He says in the early years, families lovingly wanting to shield children from grief, would sometimes tell children a pet ran away or not involve children in grief processes. In the 1970s, community members aware of the land Dr. Cooper had available started to ask if animals could be buried near the clinic. Dr. Cooper agreed and thus began the Cooper’s Pet Cemetery. Dr. Cooper notes that he even has children, now adults, still coming to the Pet Cemetery to visit their pet family members. Holidays that see humans placing flowers on family graves also regularly give rise to families coming out to place flowers on graves for their pets.

Unlike the Stephen King title with a similar name, the Pet Cemetery at Cooper’s is the permanent and peaceful resting place for over 600 Aberdeen pets. Because there is not enough land for every pet to be buried, there is a fee for burials today, but about a dozen families a year still continue to utilize this option. Dr. Cooper says pet cemeteries of this size are unusual and ones associated with veterinary clinics are exceedingly rare. “A cemetery with a veterinary clinic might be perceived that the clinic fails. This may not necessarily be the image you want to display,” Dr. Cooper says. But he also went on to describe that despite vastly improved care in veterinary medicine, pet loss is a part of everyday life. For some families, he hopes the clinic and the cemetery helps our community process pet grief in a more meaningful way. Dr. Cooper says the clinic also offers other services to save a paw print or otherwise honor the memory of family pets. He notes that every family experiencing pet loss gets a card with a poem about crossing the rainbow bridge.

Around Aberdeen, families have also independently made decisions they felt honored their pet’s memory. Aberdeen Magazine publisher and my husband, Troy McQuillen buried his beloved dog, Rylie, where Rylie preferred to lay in the grass in the backyard. Rhonda and John Webb have captured my attention for years with their repeated posts about their pets who have passed away. Rhonda describes how the loss of their dogs has impacted their family over the years. She has four urns, each with a picture of a dog they’ve loved and lost. The Webbs have used Schriver’s for these most recent pet losses. Rhonda describes those services as a blessing. She says, “there is something about the process and care used by Schriver’s that helped me have the opportunity to move through the grieving process with a little less trauma.”

My personal favorite story of beloved pet loss comes from local home appraiser, Amy Frink, who shares the loss of her terrier mix, Clyde, who passed in the late 1980s. Clyde was semi-famous locally and was known in his neighborhood for accompanying the mailman on his route. Once, when Clyde went missing, Amy attempted to call the pound with just a description to no success. Her Dad told her she should tell them his name and the pound immediately responded, “Clyde? He’s been here all day.” Another time, when Clyde was home sick, several neighbors called to check on him because they hadn’t seen him for a few days. Amy recalls speaking with one of the Schriver family members after Clyde passed because she fully intended to publish an obituary for Clyde, so everyone who knew him would know he was gone. She was told that it might seem disrespectful to families to include her pet’s obituary among human ones. While she understood the possible discomfort for others grieving family members, she would have absolutely paid for the space if allowed because she loved Clyde so much.

It only makes sense that beloved pets would be nurtured even at the time of death. Schriver’s services described above is unusual – with only two others offering similar services in the entire state of South Dakota. Cooper’s Pet Cemetery example is even rarer. Aberdeen is a special place for a lot of reasons, but the way we love animals who cross the rainbow bridge is just another example of just how special. // –Dani McQuillen