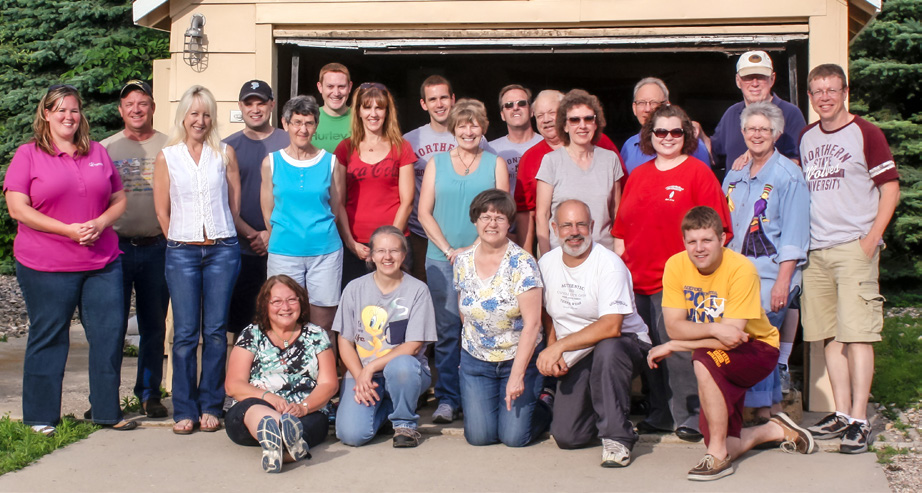 The Aberdeen Exchange Club raises awareness for the prevention of child abuse through educational efforts.

Jan Bohling had no idea how much of an impact the Exchange Club would have on her life until she became a member and got involved. In 2004, she was invited to attend one of the bi-weekly luncheons the club hosts to hear about the National Project on the prevention of child abuse, something Jan was no stranger to as a child abuse survivor.

Upon learning about the work the Exchange Club did for child abuse prevention, Jan knew it’s where she was meant to be. “I wanted to be on this committee so I could help others,” she said. “I grew up an abused and neglected child until I was eight years old and was taken from my mother to live with my aunt and uncle.” Now in 2020, Jan is the secretary of the Exchange Club in Aberdeen, and the club’s work to raise awareness for child abuse prevention remains strong.

The Exchange Club in Aberdeen is part of the National Exchange Club, which is a nonprofit organized and operated exclusively for educational purposes. The very first Exchange Club met in 1911 in Detroit, Michigan. Charles A. Berkey is credited as the founder of the organization, and when it came time to naming it, he believed the exchanging of ideas between club members could lead to great change in the community.

The concept stuck. Club chapters began to show up all over the country. Aberdeen’s Exchange Club wasn’t established until 1972 when Rollie Benson, an Exchange Club member from Mitchell, moved to Aberdeen to start the new chapter. After the Jaycees disbanded, members of that group were asked to join the Exchange Club. Founding members of the Aberdeen Exchange Club were Rollie, Gerald Miller, Jerald Loebs, Bob Wuertz, Jerome Schmitz, Wes Bonnet, Al Roseth, and Bob Beadle. Today, membership sits at 49 individuals and businesses from the Aberdeen Area.

Adopted by the national club as the National Project in 1979, the prevention of child abuse is the main priority for the Exchange Club at the local and national level. Aberdeen’s Exchange Club spent the last five years fundraising $30,000 for a room in Safe Harbor’s visitation center.

Safe Harbor works with Child Protective Services, which requires parents do supervised visits with their kids says Executive Director of Safe Harbor Gina Karst. Called Kids Konnection, the new room provides a safe and neutral space for kids to interact with their parents.

Since 2008, the Aberdeen Exchange Club has continued to raise awareness for infant abuse through education by purchasing RealCare baby dolls for the high schools in Aberdeen. RealCare baby dolls simulate realistic infant behavior. “The baby dolls we purchase are programmed to show the effects of Fetal Alcohol Syndrome and drug abuse in infants,” Jan said.

The project was designed to show teens the unfortunate outcomes of infant abuse when drugs and alcohol are involved, and how it can be prevented. The Exchange Club also uses a RealCare baby doll to demonstrate Shaken Baby Syndrome and what happens to babies that are shaken or rocked too aggressively.

Education through community service is a tenet of the Aberdeen Exchange Club, as is Americanism, and a swift dedication to youth projects. Jan says the purpose of the club is to make our communities better places to live in. For Aberdeen, this includes community-oriented projects like the Freedom Shrines which can be found at most of the public schools, Northern State, Presentation College, the YMCA, Brown County Courthouse, Uptown Aberdeen, the Aberdeen Regional Airport, and the South Dakota School for the Blind and Visually Impaired.

The Freedom Shrines serve as a callback to the foundation of our country. These shrines display replicas of the historic documents that were created to ensure and protect our freedoms. The Braille inspired Freedom Shrine at the South Dakota School for the Blind and Visually Impaired is the first of its kind.

The Aberdeen Exchange Club hosts bi-weekly meetings on the first and third Mondays of each month at the Ramkota at noon. It’s there that they discuss business and accept donations from club members that go towards the prevention of child abuse project. On the last Monday of the month during the school year, the Aberdeen Exchange Club hosts their Youth Award Luncheon, where stand out school age kids can earn accolades from the club.

The Youth Citizenship and Youth of the Month Awards are just two that middle and high schoolers from across Aberdeen can be presented with. High school seniors can receive the Youth of the Year and A.C.E. Award along with small scholarships at the end of the school year. The winners of the last two awards are then submitted for monetary district awards. If a student wins at the district level, their name is submitted to the National Exchange Club for consideration of a $15,000 scholarship. 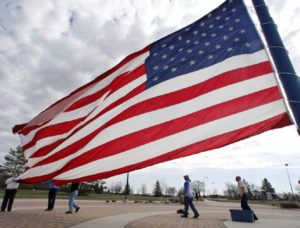 The Exchange club hangs up over 400 flags during holidays and special events across Aberdeen.

The Aberdeen Exchange Club has a history with flags in Aberdeen. They hosted the contest that produced the original city flag of Aberdeen in the ’80s. They also purchased the enormous 30’ x 60’ U.S. flag at Wylie Park that proudly flies when the weather is good. Jan said, “the Exchange Club also purchases the state flags that are put up in the Circle of Flags at Wylie Park.” The plaque on each flagpole identifies the state and the name of the family who donated it.

In addition to the flags at Wylie, the Aberdeen Exchange Club also added 14 U.S. flags to an already existing Vietnam War memorial at Anderson Park. The 14 flags represent the 14 soldiers from Brown County who lost their lives while fighting in Vietnam.

The Aberdeen Exchange Club is selling flag contracts to businesses and individuals in the Aberdeen community with the hope of celebrating Americanism. Members of the club will install a flag holder at a designated location and put up and take down a U.S. flag for up to 15 holidays and special events during the year says Jan. Are you interested in having Ol’ Glory fly outside your business? Contact Doug at (605) 380-1177 for more information.