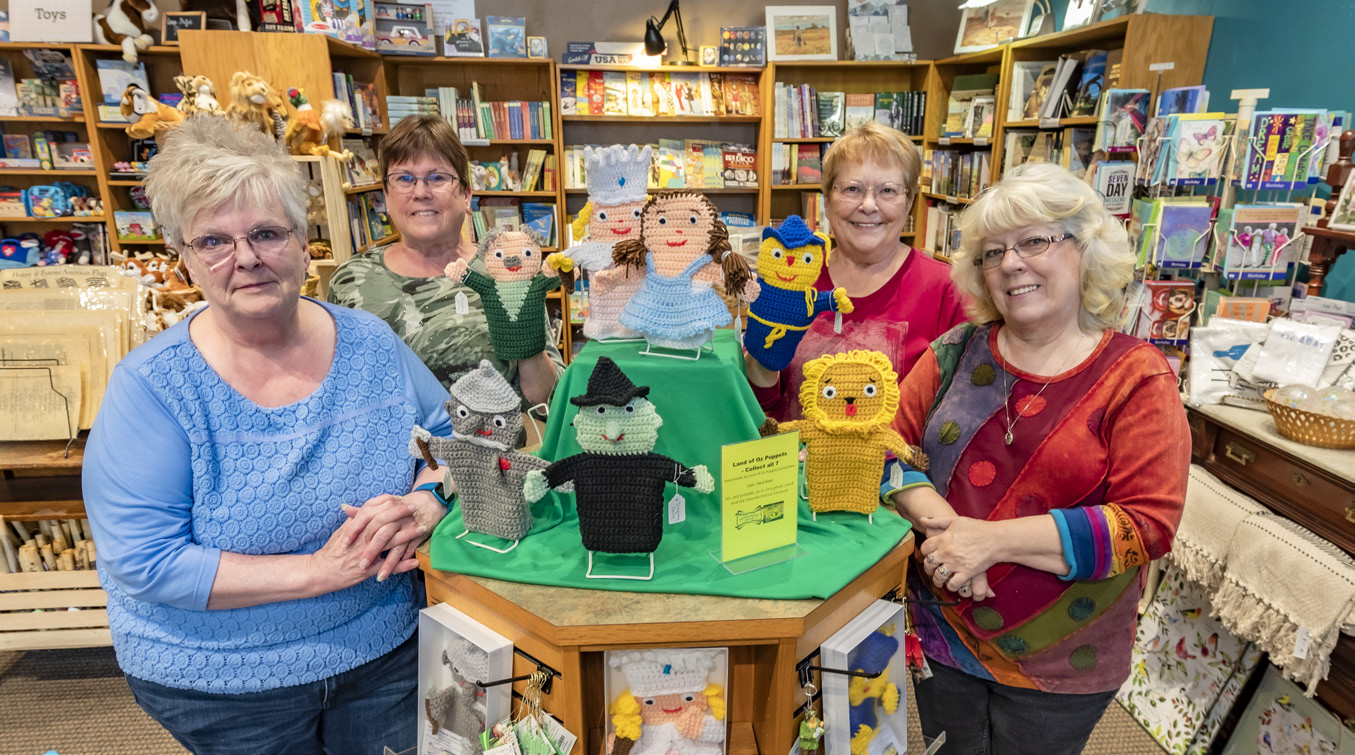 Find Storybook Land’s yellow brick road and sunny playgrounds fading from memory around the holidays? Well, the inspiration for our local Storybook Land’s theme, The Wonderful Wizard of Oz, has a lot to offer at Christmastime.

CBS broadcast the movie in early December during the ’50s and ’60s, and Linda Elsen remembers watching that broadcast every year.

“It was a family affair,” she said.

For the special occasion, her grandpa and grandma came to visit. The kids sipped bubbly, sweet pop and had buttery popcorn.

Six-year-old Linda grinned ear to ear at her favorite scarecrow dancing across the TV set. She thought, ‘If he got a brain, there’s hope for me too.’

Scarecrow’s relatable personality inspired Linda to work hard in school to grow her own mind. She even taught herself to crochet.

That skill would eventually lend her the opportunity to contribute to the Oz legacy and give back to Aberdeen.

The Wonderful Wizard of Oz was published in 1900 and adapted to the popular musical in 1939. L. Frank Baum based Kansas, as described in the book, on his time in the Dakotas, where he moved in 1888 to start an imported goods store and later took over the Aberdeen Saturday Pioneer.

The novel inspired other authors to continue the characters and magical world of Oz long after Baum’s original series.

For more than 50 years in Aberdeen, felt Christmas ornaments depicting Oz characters have raised money for additions to Storybook Land.

The Storybook Land sewing group first assembled in 1967, but by 2018, the group had dwindled. The continuing legacy of the ornaments threatened to cease, and Barb Imberi knew she could help.

In 2019, Barb decided to revitalize the ornaments’ creation with new makers and caretakers for them. Eager to continue a rich legacy and spread some holiday cheer, some Quilt Guild members agreed to help, too. 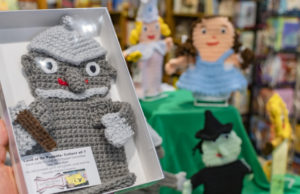 Each puppet in the collection depicts a figure from the Wizard of Oz and is crocheted by hand.

At Winterfest, Barb helped sell the ornaments, and a man walked up to the booth with an unexpected memory. The ornaments reminded him of crocheted hand puppets he had bought at a rummage sale. Barb thought they were adorable and snapped pictures of the toys.

But Barb decided to carry on the Oz legacy in a different way: hand puppets.

The only problem — Barb doesn’t crochet.

So, she called up her cousin, Linda Elsen.

Linda’s time to help with her hook and yarn had finally come. Like the scarecrow skipping down the yellow brick road, she felt eager to begin a new challenge. The activity filled her quarantine and gave her an excuse to get out to Hobby Lobby for some more yarn.

Barb came to her with only a picture of what the puppets should look like. The characters’ arms are open wide, they have red smiles, and each has a little ball for a nose.

Linda sat down with her graph paper and Barb’s photos. Counting each stitch the length of a square, she penciled in Dorothy, Tin Man, Scarecrow, Cowardly Lion, Glinda, Wicked Witch, and the Wizard.

Trial and error ruled the project. Linda looked at Dorothy and puzzled about how to create her iconic brown pigtails. After attaching the yarn braids, she realized it looked silly to not have the back of her head match the hair. So, she redid the back of the puppet’s head in brown.

That was much better.

“I hope [the puppets] bring back memories for a lot of people,” Linda said, “I hope they create new memories for their children and their grandchildren.” 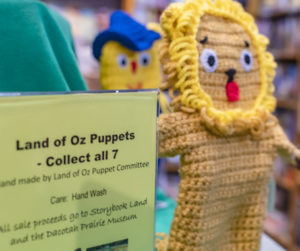 It takes about five to seven hours of concentration to handcraft each puppet.

Her favorite character, Scarecrow, has big blue eyes and a carrot nose, a blue outfit, and a yellow belt. Glinda has a gem in the middle of her white crown. Tin Man carries his axe, and of course, Wicked Witch has a mint green complexion.

Creativity in designing her own pattern isn’t new to Linda, who often creates blankets for newlyweds or babies. The extra project had her craft supplies spilling out of the designated craft room and into the living room.

Boxes of yarn sat all around, and the TV hummed as Linda crocheted 12 puppets of each character. She often paced the house to stretch her legs in between sets because each puppet takes five to seven hours of concentration.

Just three miles down the road is Storybook Land, which will benefit from the proceeds, and brims with kids following the same yellow brick road as the characters had in the movie.

The children of Linda’s nephew come from Moorhead to visit Storybook Land each year.

“I love seeing the kids’ faces when they push the button and they hear the giant talking or go to the castle or go through Dorothy’s house,” Linda said.

Keeping in mind the future of their operation, Linda wrote out instructions to go with the sketches for other puppet committee members to use because the group of women helping with the project is expected to grow. But after months of concentration, the pattern and steps are branded on Linda’s mind, so she doesn’t even look anymore. 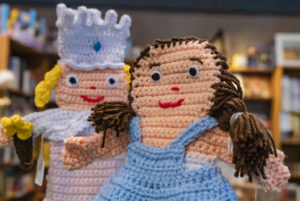 The purchase of every puppet supports the Dacotah Prairie Museum and Storybook Land.

“You can tell that these are high quality and have expert craftsmanship,” Patricia Kendall, director of Dacotah Prairie Museum, said.

The puppets have everything the museum looks for in an item: community support, local history, and fun.

The Storybook Land gift shop sells the puppets, too. Barb said she feels they would make great gifts and toys for kids visiting the campsite or park.

While Barb manages the business side, Linda’s biggest goal is for people to love the puppets as much as she does.

“I would love to see a puppet show with them being used,” Linda said.

All Linda wants for Christmas is her family all together. Hopefully this season, all eight grandkids will gather around her at the end of the long, strange year. Maybe they’ll even pop in her favorite classic Christmastime flick, The Wonderful Wizard of Oz.

To purchase these puppets, call Dacotah Prairie Museum at 605.626.7117 or stop by either gift shop. Shipping options are available.