People
A Love for the Job
If there’s an opportunity in front of you, take a cue from Fire Chief Joel Weig and go for it. Maybe you’ll end up with the greatest job in the world.
By Jenny Roth | January/February 2021 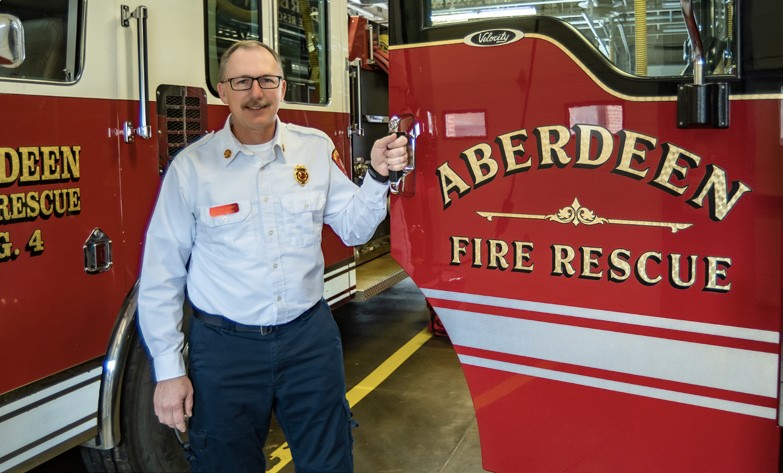 You’re probably expecting to read a story about a boy who grew up dreaming of being a firefighter and eventually became chief.

Sorry to disappoint, but this story is so much better than that.

Last August, Joel Weig was sworn in as Chief of Aberdeen Fire and Rescue. The role, which bookends his 21-year career with the department, seems like a natural fit for a guy who loves what he does and the people he works with.

Just a few months into the new position, Weig said he feels fortunate enough to have “the greatest job in the world.” Even so, it’s a job he almost didn’t apply for in the first place and part of a career he never saw coming.

From Unlikely Volunteer To Full-Time Career

Weig spent most of his childhood on his family’s ranch west of Leola. After graduating from Leola High School, he earned a degree in wildlife and fisheries management, and later, in banking and finance. The latter landed him work as the city finance officer in Redfield, where local volunteer firefighters invited him to one of their meetings.

At the time, Weig said he thought, “I’m not sure why I’m going to this because I don’t know anything about fighting fires!”

The next thing he knew, he was a member of the Redfield Volunteer Fire Department.

To get a better feel for this unexpected endeavor, he joined a handful of others and went through training to become a certified firefighter. The process took about two years to complete while volunteering with the department and working full time.

A few years later, Weig and his wife moved to Aberdeen, and he became the finance officer for Northeast South Dakota Head Start.

First, he realized he missed the fire department in Redfield, so he joined the Aberdeen Rural Fire Department. Between going on calls, attending meetings and trainings, and servicing trucks on the weekends, this volunteer gig took up to 40 hours each week.

Then came the man with the lunchbox.

“My office at work was on the sixth floor of the Citizen’s Building. I’d ride the elevator every day, and every day I saw the same gentleman. He had this little lunch box, and he looked so depressed to be going to work. And I just thought, ‘I don’t want to end up feeling that way,’” Weig explained.

Shortly after, a position for a firefighter/EMT opened with Aberdeen Fire and Rescue.

This was in back 1999, but when Weig tells this part of the story today, he still sounds in awe, “I got an interview for that position, and they offered me a job!”

And never regretted that decision.

He remembers an especially pivotal moment that happened during his first year going on ambulance calls.

“We’d go on calls in a rescue truck with the Jaws of Life, and being able to help people that way really struck home for me. When I was a senior in high school, my younger brother died in a car crash. At that time, a small town like Leola didn’t have the type of equipment we were using here.” He continued, “I fell in love with that part of the work because I know what it’s like not having the right tools for the job and that having the right tools makes all the difference.”

Still, the new career didn’t come without a few curveballs.

Weig said, “Less than two weeks after I took the job, my wife and I got a call from our adoption agency that we were going to have a baby.”

Firefighter/EMTs work 24-hour shifts, meaning they are away from their families for entire days at a time. This schedule can be tough by default, not to mention when you add a new baby to the mix. Plus, back then, firefighters didn’t get any leave or vacation time during their first year.

“I went to my shift commander with my situation, and he was very kind and said, ‘We’ll make it work,” Weig remembered.

Their daughter Shelby came home. He’s been with the department for 21 years. It did all work out.

Then, just as Weig was thinking about retiring, the chief position became available.

“When I first interviewed for the department, they asked me about my long-term goals. I didn’t really know what to say, so I said, ‘To be chief someday.’ I guess from that time forward, I just slowly worked my way toward that goal,” Weig said.

He continued, “The job isn’t for everybody, nor does everybody get the opportunity because of timing and things like that. When the chief position became available, I thought, ‘Is this something I want?’”

What held him back from applying the most was that he genuinely enjoyed the role he already had in the department as a battalion chief.

“The people on my shift, and in the whole department, are awesome to work with. When you do this for over 20 years, you live with them for a third of your life. They’re like family. So the thought of being chief, and being here 8-5, and not getting to eat with them or go on calls with them, I knew that part was going to be hard,” he explained.

Ultimately, though, he went for it.

“I finally decided, this is an opportunity, and you should never let opportunities go because they might not come around again. So I applied with my best foot forward, and the city thought I was the right fit for the position at the time. And here I am.”

Proving that if you take the chance, care about others, and learn as much as possible along the way, you really can end up with your “greatest job in the world.”

Someone To Be There On Your Worst Day

When Aberdeen Fire and Rescue goes out on a call, they often come across people who are having one of the worst days of their life.

Their mission is to help people in these situations by providing the best emergency medical and firefighting services possible.

To do this, they need excellent firefighter/first responders.

The challenge has been, nationwide, there is a shortage of firefighters and paramedics.

To overcome this, Aberdeen Fire and Rescue has adapted a team-wide responsibility for finding and training committed members who have a passion for the job and the community.

Weig explained, “Instead of competing with other departments to find firefighter/EMTs, we incorporated in-house firefighter, EMT, and paramedic training. These programs are what I’m most proud of our department for. Everyone on the team takes responsibility in training new members and taking them to that next level to be great.”

Along with this in-house training, before the pandemic, they would go into the local universities a couple of times a year and offer open-to-the-public EMT classes. The classes held a two-fold purpose. They both trained EMTs for the community and presented the idea of a career with Aberdeen Fire and Rescue.

“This is the kind of job where it’s hard to get people and keep people. Our vision in training our own members is to find individuals that both have a passion for the work and ties to the community, so they want to stay here and make this a career,” Weig said.

When they hired their most recent recruit in November, it marked the first time the department was fully staffed in the last nine or ten years.