It’s been said, “80 percent of life is just showing up.” Jay Rossman, pastor at Holy Cross Lutheran Church and member of the Aberdeen Area Chaplain Corps speaks of a “ministry of presence”— just being there. However it’s described, when it comes to Aberdeen’s first responders and the citizens they encounter, the chaplains are definitely there.

While still relatively young, the Chaplain Corps has had impact. “I wouldn’t know what to do if we didn’t have the chaplains,” commented Aberdeen Police Chief Dave McNeil. “I wish it would have been in place when I started.” Although it officially formed in 2016, Chief McNeil says it started 10-15 years ago when Pastor Jon Droege’s Aberdeen Christian Fellowship Church held appreciation events for the police department. The chief saw a need for that kind of connection. “Police are always touching people’s lives. For example, in a death, the officer tries to do the best but always has a dual role and then has to leave. I saw chaplains having a role as bridging that gap.”

Pastor Droege, who is now retired from church ministry, wonders if it was a divine appointment that brought him to chaplaincy. “Our church was thinking and praying about how to connect with the community. Then the chief contacted me about serving as chaplain for the department. I agreed, and then the fire department heard about it and asked if I could be their chaplain, too.” He added, “I tried, but I couldn’t cover both, and that was kind of the birth of the Corps.” 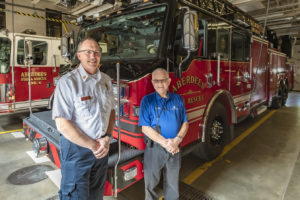 Jay Rossman remembers he had recently come to Holy Cross and was attending a regular meeting of local clergymen when Jon announced the idea of a first responders chaplain group. Before long, they set up a training with a national trainer who works with similar chaplain programs around the country. The sessions covered ministering to first responders as well as many aspects of the first responders’ jobs. They were also trained in Critical Incident Stress Management (CISM), which is a way of working with groups and individuals after a major stressful incident. Jay is now certified to do training for first responder chaplains in Aberdeen and elsewhere.

The training is key, says Deputy Brian Koens, “The job is to infiltrate our department, get to know our guys through the training so they can help deputies in time of need. That’s why the chaplains also train in doing our duties.” The chaplains continue to receive training, even in areas that might seem mundane. For example, chaplains must know what to do and where to stand during a traffic stop so they don’t cause a situation to go bad.

The Chaplain Corps serves the Aberdeen Police Department, Brown County Sheriff’s Office, Aberdeen Fire and Rescue, and the Aberdeen district of the South Dakota Highway Patrol. Chaplains are assigned to specific departments, but they are also on call for the other departments. About 15 chaplains have participated, some having left the program.

The primary job of the chaplains is to serve first responders and to address the mental health of law enforcement officers. Deputy Koens explained, “Deputies face an extraordinary amount of stress on the job. It’s well known that many law enforcement officers are guarded by nature and can have trouble opening up about their trauma to a psychologist, spouse, or friends.” He adds that suicide in law enforcement is high. According to Blue H.E.L.P., in 2019 alone, 228 current or former police officers took their own lives. “Many officers shove that stress away and I want to know how I can help my fellow deputies,” said Deputy Koens. So, he signed on as the Sheriff’s liaison to the Chaplain Corps. The Chaplain Corps serves as a step between talking to a family member or psychologist or attending an Employee Assistance Program for first responders.

Deputy Koens said, “I’ve seen and done things I wouldn’t want anyone else to experience, and those things come with a toll.” In the past, he says the solution for law enforcement was to just get over it and move on, but Deputy Koens recognized a need for more than that. “The jewel of the Corps is that the chaplains get to feel, see, smell, and taste what we have to do. They witness the stress and then they can help level the stress out.” Jay describes the experience as absorbing the lightning bolt – the first strike each situation will have on the family and the officer.

The trust between the chaplains and police officers didn’t happen overnight. “When we started the program, the understanding was that it would take five years to break down the shell of the officers,” Jay said. Patience was emphasized and continues to remain a big part of the relationships formed between chaplains and police officers. Jay added, “The biggest thing really is patience because you are breaking into their world. It’s little steps, one officer at a time, one crisis at a time. That can be frustrating for chaplains.”

Father George Parmeter, a retired Episcopalian priest, who has served in law enforcement chaplaincy programs in other communities and now chaplains for Aberdeen Fire and Rescue, explained, “My ministry to them is getting to know each of them and the conditions they work under so they are comfortable having me around and can trust me to do what will be beneficial and safe. It’s about developing a trusting relationship, letting them know I’m somebody they can talk to, maybe goof around with.” 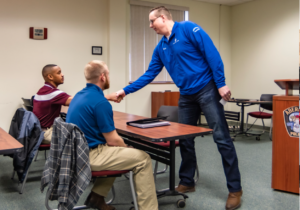 Jay said, “As we move from organization to organization, we’re developing more expectations for how chaplains do the job.” Most importantly, Jon says chaplains must understand the challenge of the job, “You’re going into a guarded, protected community. The expectation is that you’re willing to go where the average community person can’t and to go in a time of crisis. It’s not for everyone. You have to be able to respond in a level-headed, gracious, compassionate way to a crisis situation.” The chaplains aren’t there to represent a denomination or to make conversions of faith. “We’re here to walk with you and provide spiritual, moral, and social support,” said Father Parmeter.

The chaplains are helpful in all sorts of situations, and Police Chief McNeil believes they provide extra help in the most tragic of these circumstances. “It can be horrific, and chaplains can be there to help,” he said. Deputy Koens agreed, “Jay came along to a scene where a family member of the deceased was there, and he worked with the person while we worked on investigative things.” Severe, critical incidents in Aberdeen have almost always involved a chaplain. Fortunately, those incidents aren’t an everyday occurrence. Jon said, “The chaplain’s role is crisis demand-based. We can go months without a call, so we may just do station visits to drop off cookies.”

The chaplains find many ways to help, even if it’s just preparing a meal for first responders. Father Parmeter said, “I’ve cooked for the three shifts on occasion, visited the stations regularly, participated in training events, and been available to the families of the department if needed.” In addition, he said, “During the Malchow’s fire, the chief asked me to do crowd control so I helped explain to the crowd what was going on, and I made sure firefighters got water, food, etc.”

Brad Kingsriter of Aberdeen First Assembly Church said, “Not only are chaplains there for the first responders, we are also there for the general public who may be experiencing life-changing events as well.” Death calls are a big part of the job for the chaplains

Chief McNeil said, “When officers meet with citizens about details and mechanical things, they’re less focused on the emotional. Chaplains can get to the emotion.” The benefit is the chaplain can stay there and be present while officers go off shift or attend another call. The chaplain stays to help with the ‘what do I do now?’ questions.” Jay explained, “Our goal is to stay until their pastor or caregiver comes and takes them to the next step. It’s the ministry of presence. Sometimes we don’t say anything, and they say thanks.”

Chief McNeil notes that the chaplains have been especially helpful in relations among diverse cultural groups in the community. “They’ve helped bridge gaps in communication, built trust, and have stayed committed to cultural groups.” He mentioned the shootings on the east side of town a few years ago, which injured both a citizen and a police officer as well as damaging property. “Members of a cultural group worried they would be blamed or would be victims. The chaplains helped bridge the gap and let them know the Aberdeen Police Department serves the whole community,” Chief McNeil said. The chaplains worked with the group’s religious leader to make that connection. “This was a good example of the role of chaplain: we don’t wear a badge, don’t carry a gun, so we’re not intimidating to a person on the street.”

Service to the community is clearly part of why the chaplains do what they do. In part, that comes from the churches they serve. “They provide time and resources for us to participate and extend the congregation’s impact out to the community. It’s bigger than just the chaplains,” Jay said. 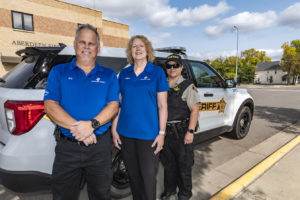 Respect and love are part of it, too. Kevin Bergeson, of Bethlehem Lutheran Church, spoke of visiting the fire department: “I reached out to them, because as usual, many are working on holidays. It was Ash Wednesday, and I was so struck when I walked into the firehouse that these women and men would receive ashes on their foreheads as a reminder of our mortality. They live with ashes on their foreheads every single day. It is a calling to do the work they do and my privilege to show up and support them.”

Chief McNeil summed up the impact the Chaplain Corps has had on first responders,: “If we had started this 20 years ago, we might have kept more people in the department, saved marriages even, but I’m confident we’re making a difference now.” Jon agreed, “Chief McNeil’s’s vision and heart to care for officers and community has been vital for the group.”

Father Parmeter summarized the role of chaplains as: “You forget your denomination. You’re there to deal with hurt and pain of the moment and to try to let people know they’re not alone and let them know someone is there who cares for them. Blessed are the peacemakers, and if there’s anything a chaplain is there to do, it’s to bring peace to a situation.”

These folks clearly do more than just show up. // – Patrick Gallagher\