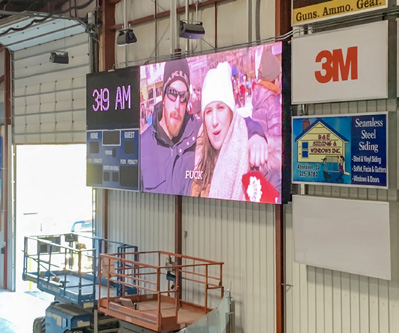 Published on January 14th, 2021 | by AberdeenMagazine

The puck skids across the ice into the goal: what a close shot! Wait, did that really just happen? The new 18’ by 10’ video board lets fans watch important replays easily at the Aberdeen Wings Arena. Aaron Smith, director of operations for the Wings, says the backlit projector screen on the west end of the Odde Ice Center means gameday excitement from fan interaction, commercials, and player introductions. The Daktronics board is ready now for next season. Each off-season, the Odde family renovates more of the arena, like adding the light and smoke show. Aberdeen’s team anticipates an October 9 start date to their 60-game season. // – Jeni Fjelstad