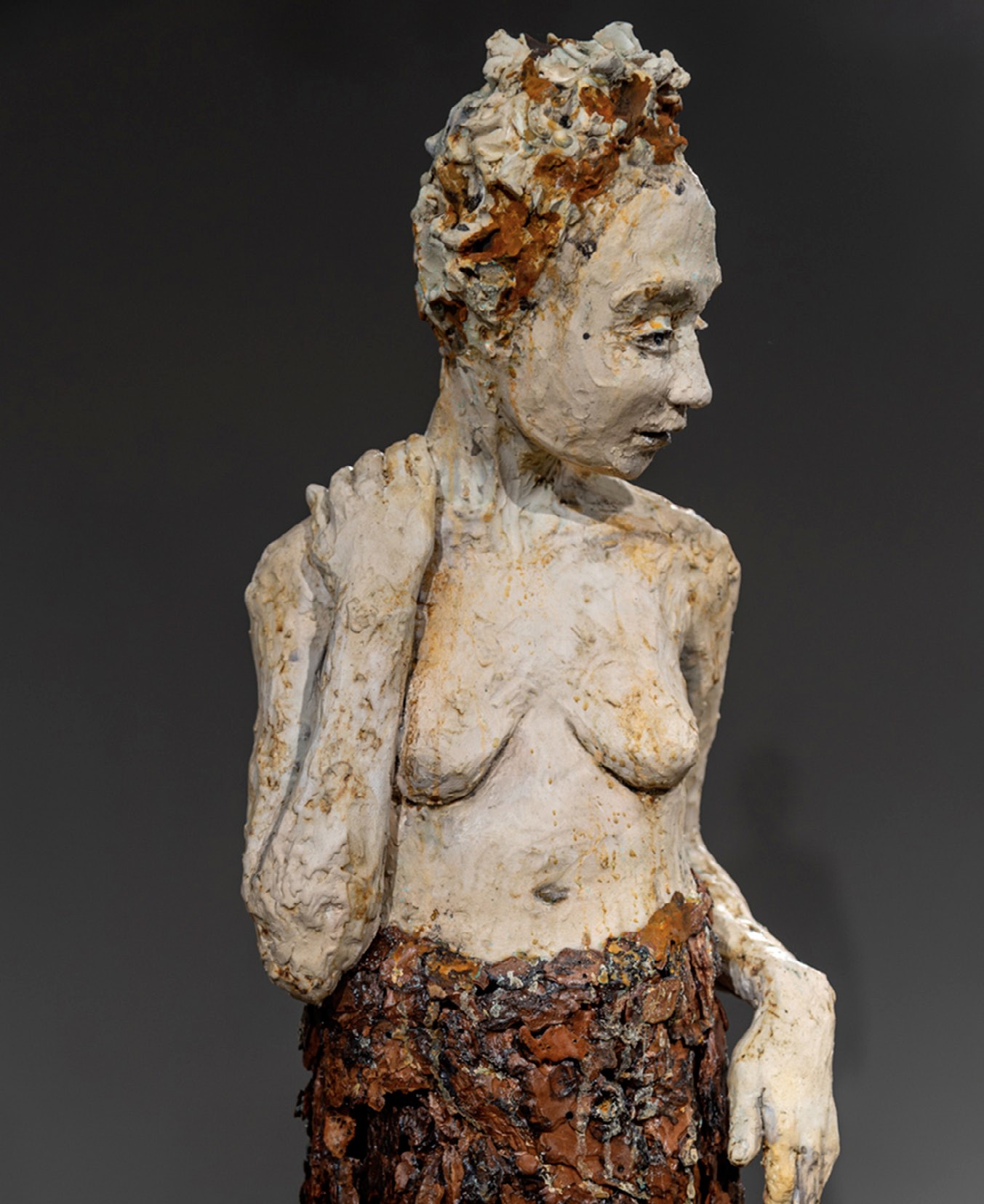 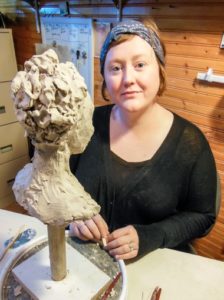 Artist Becky Grismer graduated from NSU and lives in Spearfish.

The first time Becky Grismer attended a ceramics class at Northern State University, she knew she would one day be an artist.

Grismer was born in Aberdeen and grew up in the small towns of Hosmer and Henry—building forts in the trees and doing grade school art projects. She said she never realized that being an artist was a realistic option as a full-time job until she almost quit school before embarking on her current career path.

“I didn’t really know what I wanted to do that first semester,” Grismer said. “My second semester, I decided to take one class from each field that sounded interesting to me. If I didn’t find a direction, I would take a year off, and that’s how I ended up in ceramics. It was my favorite class, and I met a lot of people that I had things in common with. I felt like this was where I fit; this was where I belonged.”

That initial class led to Grismer spending her sophomore year immersed in all the foundational art courses Northern had to offer. When an art department trip took her to Minneapolis – St. Paul to tour various art studios and galleries in the city, Grismer knew she had found her calling.

“That was the thing that made me realize I could actually do this for a job—it clicked,” Grismer said. “Seeing that people were making a living doing this every day, seeing an example of what that looked like, I knew then that working as an artist was something I could aspire to.”

After graduating from Northern in 2002, Grismer moved to Minneapolis. Here, she met her husband, and the two eventually relocated to Spearfish, where she now works as a full-time artist. But even though she lives half a state away from the university that first introduced her to art, Northern still has a role to play in Grismer’s professional journey.

At the end of last year, Grismer’s exhibit, Taking Root, opened at Northern’s JFAC Gallery and will remain up until February 19. The exhibit’s title, Grismer said, has a dual meaning—both a reference to her use of materials like tree bark and leaves and the concept of laying down roots in a place and allowing yourself to grow and change in that new environment.

“It’s also a little bit of a nod to NSU and coming back here,” Grismer said. “This is where I learned the foundation for everything I do today, where I first learned that it was possible to become an artist and do this every day. This is where all of that knowledge took root in me.” 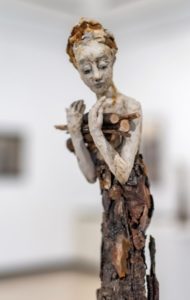 Taking Root explores what it means to lay down roots in a place. Photo by Troy McQuillen.

The work featured in the exhibit isn’t your typical landscape paintings and self-portraits, either. Grismer isn’t necessarily a painter, a sculptor, or printmaker. Instead, she’s all three and more, a true mixed media artist who enjoys working with everything from eco-dyed paper and wax to hundred-year-old photographs and charcoal.

“I have a hard time focusing on one specific media,” Grismer said. “I’m interested in a lot of different things, experimenting and combining materials in new ways, and I’ll gradually learn more about all the materials I work with along the way.”

In that vein, Taking Root is a true representation of Grismer’s diverse way of creating art. The larger installations are mainly made from tree material and ceramic, including pieces like “Adorn”—a half-tree, half-woman creation decorated with Christmas lights, representing the ways we choose to adorn our bodies.

Then there’s “Abscission,” which depicts a tree losing its leaves due to stress or the changing seasons. Humans also experience this outward shedding through the natural life cycle of hair growth and a condition called alopecia that results in hair loss under duress.

“When a tree endures stress from drought or flooding, it can drop its leaves,” Grismer said. “I went through a time of stress where my dad, my dog, and two close friends all passed away over a short period of time, and I experienced a form of alopecia from the stress.”

That blending of natural and human elements is a theme Grismer continued throughout the Taking Root exhibit. She created some of her 2D pieces using photos spanning back decades to when her family immigrated as part of the 1800s Homestead Act.

The sculptures and photos combine in ways that integrate both the history found in the images and the tree parallel Grismer threads throughout this collection of pieces.

“I combined a photo of my grandma with a photo of the bottom half of one of my sculptures,” Grismer said. “It ended up being a piece about my grandma putting down her roots on their homestead. The pieces are about my own family, but they are also about the general migration of “Germans from Russia” to the area, and the parallel connections we have to trees, too.” 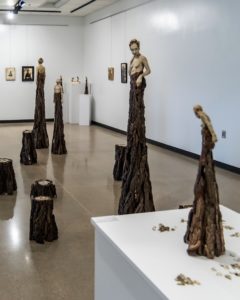 In a time when art, as we used to experience it, is becoming harder to enjoy in person, Grismer said she believes art is maybe more vital now than ever before.

“We’ve had to reinvent the wheel a bit when it comes to how we make art happen with COVID,” she said. “Being in quarantine, people need art—movies, books, music, photos—for their mental health. Art is so easy to take for granted, but it’s so necessary.”

While enjoying the art of live music and theater may be difficult at the moment, Grismer points to the accessibility—and safety—still available when experiencing art in a gallery like the Johnson Fine Arts Center. Visitors can take in each of the pieces while social distancing and wearing masks, plus this kind of art hasn’t been solely relegated to an on-screen experience like so many other art forms have in the past year.

But Grismer believes all art is vital right now for another important reason. Empathy.

“What better outlet is there to start a conversation than art?” she said. “When you’re standing in front of a painting, or really, experiencing art in general, it serves as a ‘lead-in’ to talk about the subject or topic that is in front of you. Art is a way to connect to another human being that’s not so confrontational. When you start talking with another person, you begin to find things you might have in common with them. You find shared experiences with them through the art you’re experiencing together.”

After a year that’s been almost anything but unifying, an artist who stumbled upon her career through a ceramics class in the town where she was born still thinks art can be a way toward rediscovering the humanity that unites us all.

“You just hope that your work and your service make a positive impact somehow,” Grismer said. “If it makes someone feel good, if it sparks a conversation that maybe wouldn’t have happened otherwise, you can’t fail at your goal. Even if you impact someone on the smallest level in a positive way, that goes really far in making what you do seem worthwhile.”

Becky Grismer’s Taking Root exhibit is open inside the JFAC Gallery at Northern through February 19.