Early History
Between Pandemics
A hospital born in the aftermath of a pandemic faces demolition after another.
By Troy McQuillen | March/April 2021 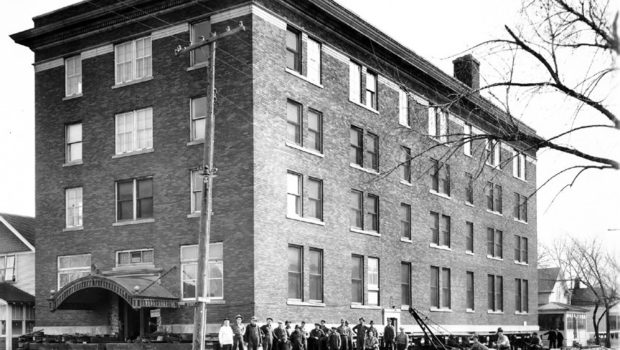 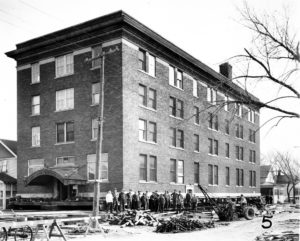 The four-story structure you see here was originally on Lincoln Street as Lincoln Hospital. In 1940, the Presentation Sisters had it hoisted up and moved to State Street, where it became an extension of St. Luke’s Hospital known as the Annex. The historic building will be torn down this spring.

By now, most of you have heard the incredible story of how the Presentation Sisters conceived a strategy to move a four-story brick building from Lincoln Street to State Street in 1940.

It was a great idea and probably saved them thousands of dollars when considering expanding St. Luke’s Hospital. After being hoisted up, the building edged out onto Lincoln Street, headed north toward the Brown County Courthouse, turned right onto First Avenue Southeast, then proceeded east toward State Street. It then headed south on State and backed into its final resting place on the corner of Third Avenue. Soon after, a handsome bridge was constructed, linking the two hospital buildings. The building, previously known as Lincoln Hospital, became known as the Annex and was used extensively over the years by St. Luke’s. It is now referred to as Lourdes Hall.

However, as times change and hospitals require state of the art facilities, the Annex will be demolished in March, along with the bridge. Both have been condemned for years, and neither suits the hospital’s plans for growth. Avera has plans for several buildings along Third Avenue and is coordinating demolition with maintenance projects planned by the city.

When a building disappears, many connections and stories also disappear with it (see our cover story), but alas, buildings aren’t meant to last forever. Here’s a little background on the Annex.

After the Spanish Flu pandemic of 1918, it was determined that Aberdeen did not have enough beds to care for the growing city. A group of physicians and surgeons built a clinic on the corner of Lincoln Street and Fifth Avenue Southeast, across from where the YMCA would be built. The clinic still stands and is now used as apartments by the Murdy family. 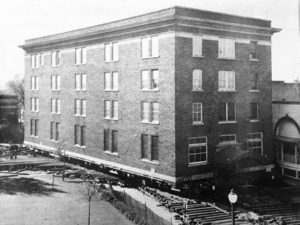 A year after the clinic opened, a four-story hospital/hotel was built right beside it to the north with the capacity for 90 beds. Aberdeen architect, John W. Henry, designed both the Murdy Clinic and the new Lincoln Hospital. If one reads between the lines, the Lincoln Hospital could be considered a competitive, Protestant hospital to that of St. Luke’s. In fact, the Masons were also planning a hospital at the same time. It was reported that the Murdy’s sought support from the Masons for their venture. Apparently, it worked out. According to an Aberdeen Daily News report of the grand opening in 1920, it was called Lincoln Hospital, not for Lincoln Street, but rather Dr. Robert Lincoln Murdy. Most of the building served as a hotel, while the upper floors acted as the medical facility. In fact, the exam and surgical rooms were located on the fourth floor.

Dr. Robert Murdy died from an infection resulting from a scratch inflicted while performing surgery. Upon his death, the hospital fell apart, the depression began, the building changed hands a few times, was foreclosed on, and finally closed in 1938. It was last used as a nursing home. The Sisters purchased it in 1940 and hatched the idea for the “big move.” It is oddly poetic that a pandemic contributed to the birth of this building, and another pandemic will bookend its demolition.