Art & Culture | People
The Eye of a Craftsman
Mike McHugh is always on the lookout for ways he can turn a piece of wood into a work of art.
By Jenny Roth | March/April 2021 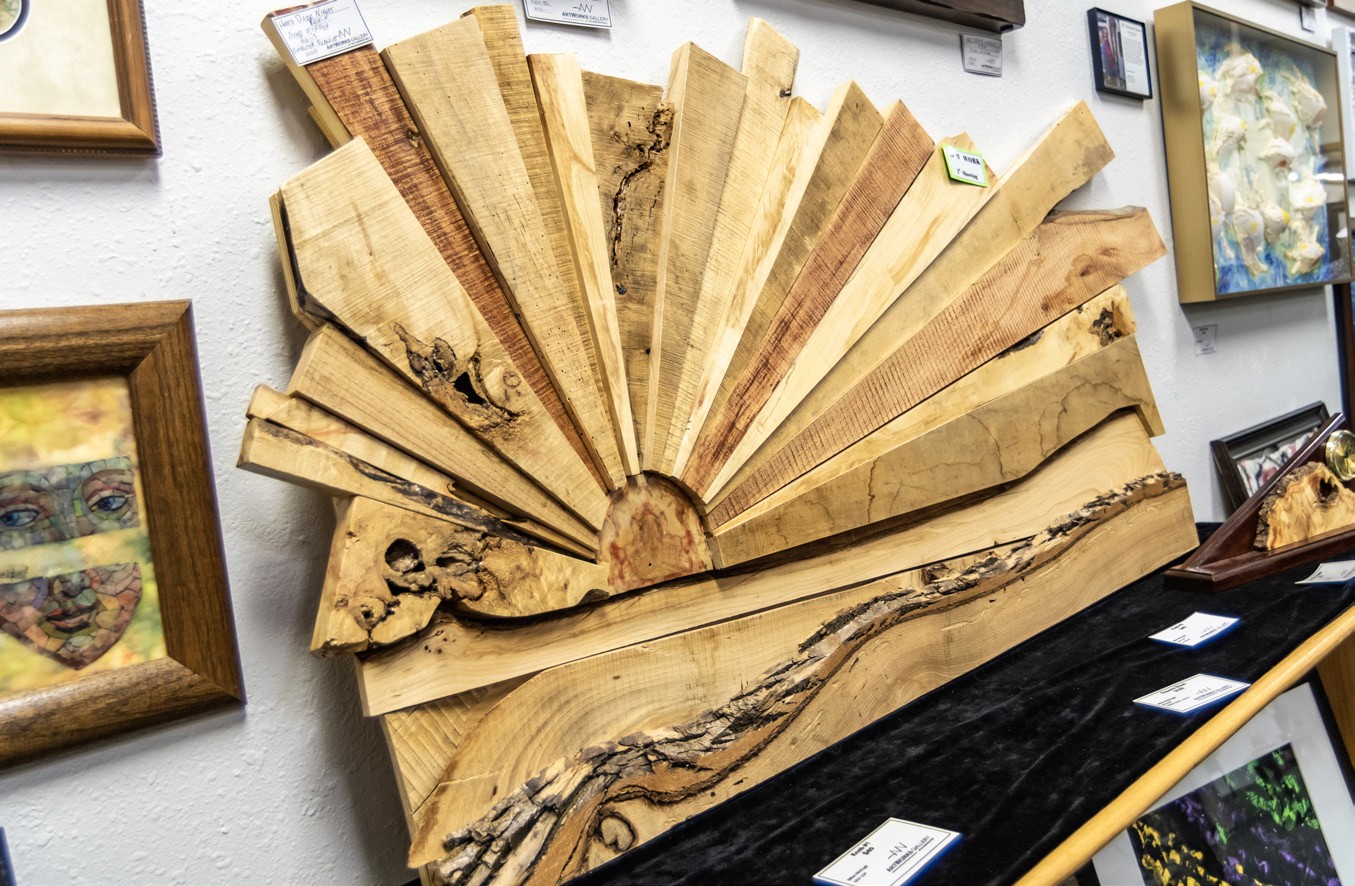 When you walk into a room where a beautiful table or an elegant clock centerpiece immediately catches your eye, you get the sense that this is more than just a place. It’s a home with a story. Mike McHugh is a local woodworker who crafts pieces like this. Many of his creations have a little bit of history, and all of them will make you stop and look twice.

Maybe his care for the story behind an object comes from his own roots in this area. Mike grew up on a ranch between Aberdeen and Colombia and resides there still today. He attended a one-room country school for eight years before heading to Aberdeen for junior high, high school, and college. After graduating from Northern, he took over his family’s ranch, which was initially founded by his dad’s stepfather, Isaac Lincoln of the NSU Lincoln Hall namesake. Here, Mike farmed for over 40 years before his retirement.

Before farming, Mike had dabbled in woodworking as a kid in his local 4-H club. He particularly remembers his dad buying a Shopsmith in the 1950s, a tool he still uses today. But once he started farming full time, understandably, fixing the ever-present broken fence or barn door took priority over woodworking as a hobby. It wasn’t until he retired some 15 years ago that he could pick up his tools again just for fun.

“I started by finding unique pieces of wood and making clocks,” he said, “and that’s evolved to include crafting tables and other furniture items or home display pieces.”

Mike said he keeps one ear to the ground for wood that has an unusual color or grain. This includes checking out stores that sell imported wood when visiting other cities, buying pieces of Redwood when he and his wife Mary made the trip to California a few years back, and creating things from area trees that have died or been cut down.

He mentioned local boxelder wood as an example of the latter. “I really like to use boxelder in small items like clocks because it has this nice red and pink grain in it.” To find this wood, he’ll notice limbs that have blown down or broken off or places where these trees have died and can be cut.

Mike said he tries not to put any stain or artificial color on his pieces. “The finish can sometimes change the coloring a little bit, but I try to do everything without adding any additional color. That way, what you see is just the beauty of the wood itself.”

A favorite part of woodworking for Mike has been helping family and friends preserve memories. He made a clock for a neighbor out of the lumber from a tree his mother had planted back when she was a rural schoolhouse teacher. He also made a table from the elm trees his grandmother planted on the family ranch 100 years ago. From these same elms came a bar top and 13 tables for his daughter and son-in-law’s business, Obscure Brewing Co. in Sioux Falls. In these cases, you get the sense that it’s as much about having something that was close to the person who planted the tree as having something made from the tree itself.

The thing Mike enjoys the most about his craft is the challenge of coming up with a new idea and trying to put it together. He likes making pieces that you don’t see every day, as well as things he’s never done before. Right now, this includes working on a five-drawer, flat file storage cabinet for his niece so she can store and file her canvases and sketch sheets. Before that, he built his family’s big-screen TV entertainment center. It’s not unusual for a family member to fall in love with a style of furniture they see at a store and for Mike to “whip them up” a similar piece on his own.

Mike is mostly a self-taught woodworker. He often spots project ideas in magazines, finds a piece of wood that he thinks will work, and gives it a shot. He’s able to work year-round at home, having converted part of a former horse barn and machine shed into a heated woodworking shop.

He joked, “If I had to make a living doing this, I don’t think it would be very good because of the time it can take me to make things.”

But, he added, for a retired person, it’s a great hobby. “I can come out here and spend as much, or as little, time as I want to and make things.”

Mike McHugh’s pieces are available for commission at the ArtWorks Gallery in the Aberdeen Mall. To reach him for a custom order, call 605.380.1793 or email [email protected].