People
Trapped: The Reporter Inside The Parent Within
Dave Vilhauer’s book teaches sports parents how to be supportive, positive, and understanding during their children’s athletic careers.
By Patrick Gallagher | March/April 2021 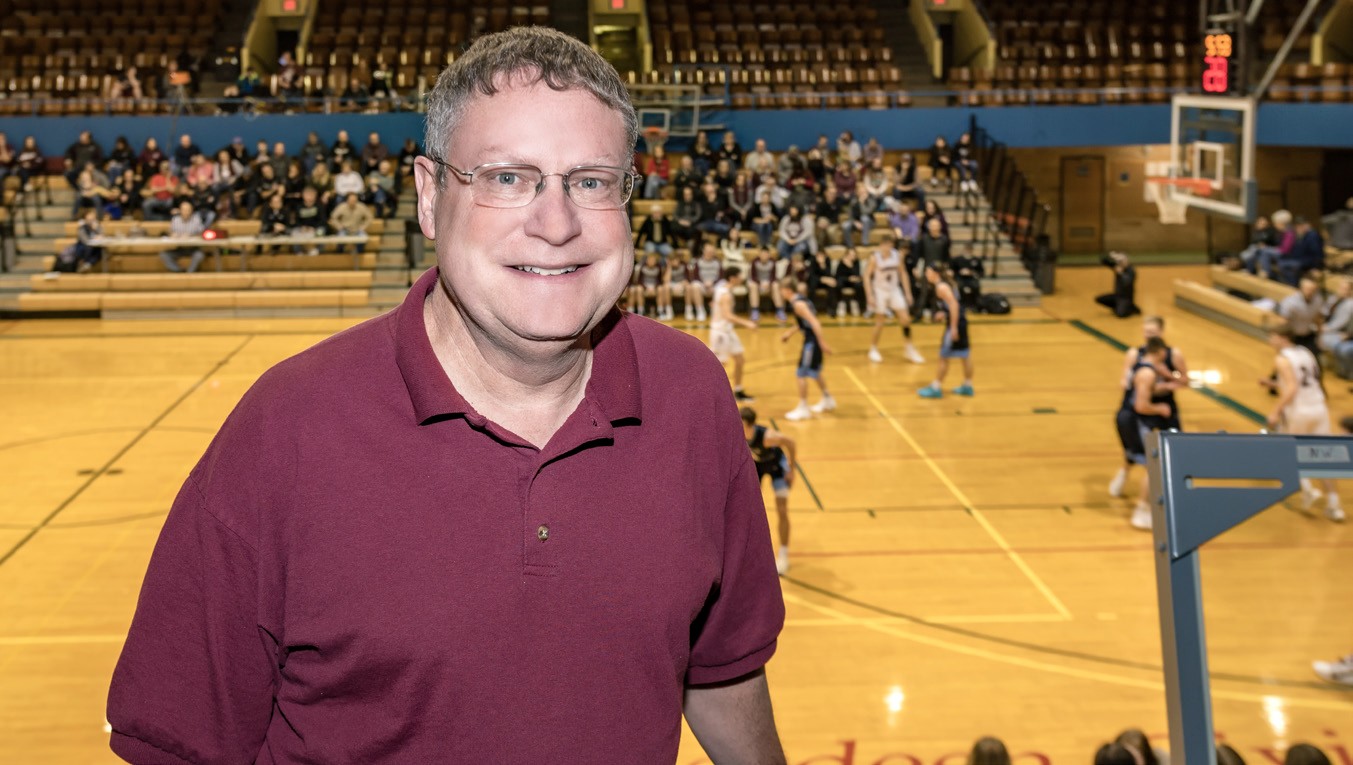 Dave Vilhauer worked as a sports reporter for years before becoming a sports parent. He shares an honest account of this unique perspective inside his book, The Parent Trapped Within: A Guide to Sports Parenting.

Some years ago, during a close high school boys basketball game between two good rival teams, the best player on one team committed a foul. While one side cheered and the other booed, a fan in the front row jumped up and pointed at the player. Immediately feeling stupid, I quickly sat down, hoping my action had been invisible amid the excitement of the game.

As a sports reporter for the Aberdeen American News at the time, Dave Vilhauer might have been at that game. Fortunately, I didn’t see myself in the examples in his book, The Parent Trapped Within: A Guide to Sports Parenting. Maybe my eruption didn’t qualify inclusion since my son wasn’t in that game, but that didn’t mean other kids on the court weren’t worried about their parents’ outbursts. The 40-some-year sports media veteran wrote the sympathetic but critical look at sports parenting because he said, “Being a sports parent is very difficult. Parents play a vital role in the lives of their athletes. It just shouldn’t be as coach, official, judge, and jury.” America’s sports obsession doesn’t make it any easier, but he’s “attempting to help change our culture one person at a time.”

The book’s title has multiple meanings. “Sports parents have a parent trapped inside,” Dave said. “They want to help their child but only have so much control over what’s going on.” Some try to exert control, however, which can create problems for all involved. In addition, “Parents are also trapped in a system of competitive extracurricular activities,” he said, which sometimes pits parents against each other. Tellingly, it’s not just athletic coaches who see the tensions. A music teacher told Dave, “It may say sports in the title, but I see the same things among music parents.”

The challenges in sports parenting are happening in a culture in which sports has gained outsized influence, when more people watch the Super Bowl, for example, than a Presidential debate or inauguration. Given this predominance, it’s not surprising how much some parents invest in their children’s athletic success, whether it’s in pursuit of a college scholarship for the child or some kind of bragging rights for the parents. This leads to what Dave calls the basic premise of the book: “A parent can never want it worse than the athlete. If that’s true, either the parent is overly invested, or the athlete isn’t invested enough.” When the parent wants it more, problems can follow, whether it’s in the family, on the team, or in public.

Aberdeen Central girls basketball coach Dawn Seiler, the winningest girls coach in state history, recognized the issue, “Parent involvement is a part of sports. Some parents are only interested in their child’s experience in sports. These parents are by far the minority but tend to get the most attention. Every coach has had to deal with these types of parents, and they do have a negative impact on the team experience.”

As a reporter, Dave noticed the problems sports parents could bring “from day one,” but he doesn’t preach from a holier-than-thou perch. “I always told myself I’d never be that parent, but I’ve disappointed myself,” he said. “You don’t know how hard it is to be a sports parent until you are one.” The book has several examples of bad behavior by sports parents. The only perpetrator Dave identifies, however, is himself, but “if I look bad because of the stories about myself,” he said, “that’s okay if people learn to avoid the traps I fell into.”

The other person who frequently appears by name is Dave’s son Isaiah, an Aberdeen Christian graduate who played basketball and tennis. It’s only natural a book about sports parenting by a sports parent would feature stories about the writer’s athlete child. Isaiah graduated in 2018, and the book came out in 2019. “The timing was fortunate,” Dave said, “since it was when I ‘graduated’ from being a sports parent.” For his part, Isaiah said, “I didn’t think I would have such a prominent role in his book,” but “It was fun to see a different perspective other than my own during those sports moments.”

Dave insisted, “This is not a parent trashing book” and repeats that it’s hard to be a sports parent. He wants to change the world, but the aspiration begs the question: would the people he’s concerned about read a book like this? Maybe.

Coach Seiler added, “These decisions are not personal, but they are decisions that you have to make for the good of the team. Most people get that.” Sometimes they don’t, and sometimes it’s very visible. But maybe it will help if they see themselves. 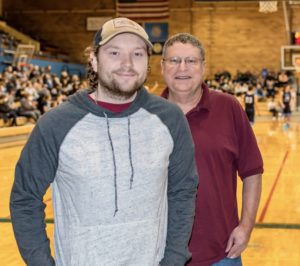 Dave’s book also features stories with his son Isaiah (at left), who played basketball and tennis for Aberdeen Christian.

Dave gives examples of a variety of lamentable sports parenting behaviors. Still, it’s fair to start with the antithesis of the overinvolved parent: the absentee parent, the one who attends few or none of their children’s contests (without justifiable reasons, that is). Obnoxious parents can embarrass their children; invisible ones might discourage them.

But the book is primarily about helping parents avoid unhealthy actions. A common parent trap is the timekeeper/lobbyist who pushes to boost their children’s playing time or spot on the team, which can put them at odds with other parents. Again, music, drama, and speech parents recognize this too. Dave admits he once talked to a coach about where he thought Isaiah ranked on the tennis team. Early in Coach Young’s Texas career, when he coached softball, he moved a girl who had worked hard to play catcher to first base. “I broke the news to her, and as expected, she was disappointed but seemed to accept it,” he said. Later that day, while he and his wife were on their way to a Valentine’s Day dinner, the player’s mom called, and Billy “spent the next 40 minutes listening to her explain how stupid and heartless I was.”

For some parents, it’s a legacy thing. As Isaiah described, “One of the biggest things is for parents to not try and relive their glory days through their child.” He added what would seem an obvious point, “Parents shouldn’t force their child to participate in a certain sport because they liked that sport when they were younger.”

Another example is the “expert” in the stands. Dave noted that the proliferation of televised games and the explosion of sports information has convinced fans they know everything. Coach Young once got “verbally abused for an entire game by an elderly grandma who was not happy with my play calling.” He can still hear her yelling, “that play still doesn’t work!” Dave highlighted the irony of a coaching shortage despite the abundance of experts in the bleachers.

Some parents also criticize their child. Billy mentioned an egregious example of a boy who had a sore shoulder because “dad wasn’t happy with how he tackled in the game the previous Friday, so he had him practice tackling an old refrigerator they had stored in their barn.”

There may be no more common problem among sports parents—and among sports fans universally—than complaining about calls made by officials. At one of Isaiah’s basketball games, Dave admits he caught himself yelling, “That wasn’t traveling the other night.” In a humorous example of overinvolvement, he mentions a parent joking that he’d noticed how much coaching and officiating improved after his kids graduated from high school. As with coaches, it’s no wonder officials are hard to find.

Ron Hellwig, who was a tennis dad with Dave, remembered one of his daughter’s intense volleyball matches, “The other team killed the ball that looked to be out of bounds. As I stood up to let the ref know that he was blind, Dave’s book came into my mind, so I sat back down and put the match into perspective. My daughter was involved in a great volleyball match that she’ll always remember, win or lose.”

The book is having an impact. “People have told me they read the book and are now changing what they’re doing at events,” Dave said. “Someone told me their goal is to be sure they’re not in my next book.” 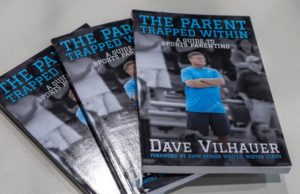 The Parent Trapped Within: A Guide To Sports Parenting has been out for a couple of years. It continues to impact parents and help them positively support their athletic children.

The Parent Trapped Within is hardly only about bad examples. In addition to celebrating the positive aspects of sports parenting, Dave offers many suggestions to help parents assess their support for their athlete children, including a kind of do’s and don’ts checklist. An important point is: “Parents need to remain positive, understanding, and supportive through the peaks and valleys of athletics.”

Dave encourages parents to talk non-critically with their children about a competition, but maybe to wait a day. One of his checklist points is “Allow your son or daughter to share the joys and frustrations of athletic events without letting your own opinions take over the conversation.” According to a reliable witness, it works. “The best parts were the reflective moments after the sporting events,” Isaiah said. “I really enjoyed recalling certain plays or certain moments during those events that helped result in the outcome of that game or match.”

Watching sports is also fun, particularly with people you like. Youth sports offer chances to get to know parents of children’s teammates as well as opponents. From treats at elementary games to high school team dinners or post-game get-togethers, socializing with other sports parents is much preferable to competing with them.

“I’ve always believed there were valuable life lessons for those who participated in extracurricular activities,” Dave observed. “Until I wrote the book, I didn’t realize the lessons to be learned by their parents.” Two of those lessons in his parent checklist involve fundamental parenting jobs, role modeling, and love:

“Always respect the game, support your children to the best of your ability, and handle every situation with character and class. That is the best way to handle the parent trapped within. Parents, don’t take these years for granted. They promise to be the most emotional, stress-filled, unpredictable, joyous, meaningful, and rewarding times of your life.”

“The message,” Dave concluded, “is to enjoy it while you can. There’s a sunset clause on being a sports parent. The time will come when you won’t be able to enjoy it anymore.”

So sit down, watch, and cheer (don’t boo or point fingers). It’s better for you and your child.

For information on purchasing The Parent Trapped Within: A Guide to Sports Parenting, visit theparenttrappedwithin.com.

Since publication, he’s done book signings and readings and appeared at state tournaments and other activities to promote the book. “It’s been a challenge, baring my soul in the book and talking about it,” he said, but the response has been overwhelming. “The book has been out about two years, and it’s gaining momentum.” Besides endorsements by the likes of ESPN sportswriter Buster Olney, it’s helped to have coaches like Dawn Seiler recommend it at a National Coaches Association clinic and in coaching clinics in South Dakota.

Another boost, he added, somewhat wryly, is that the book “doesn’t have a shelf-life. The problem isn’t going anywhere. I had someone tell me the book may be more relevant in 10 years than it is now.”