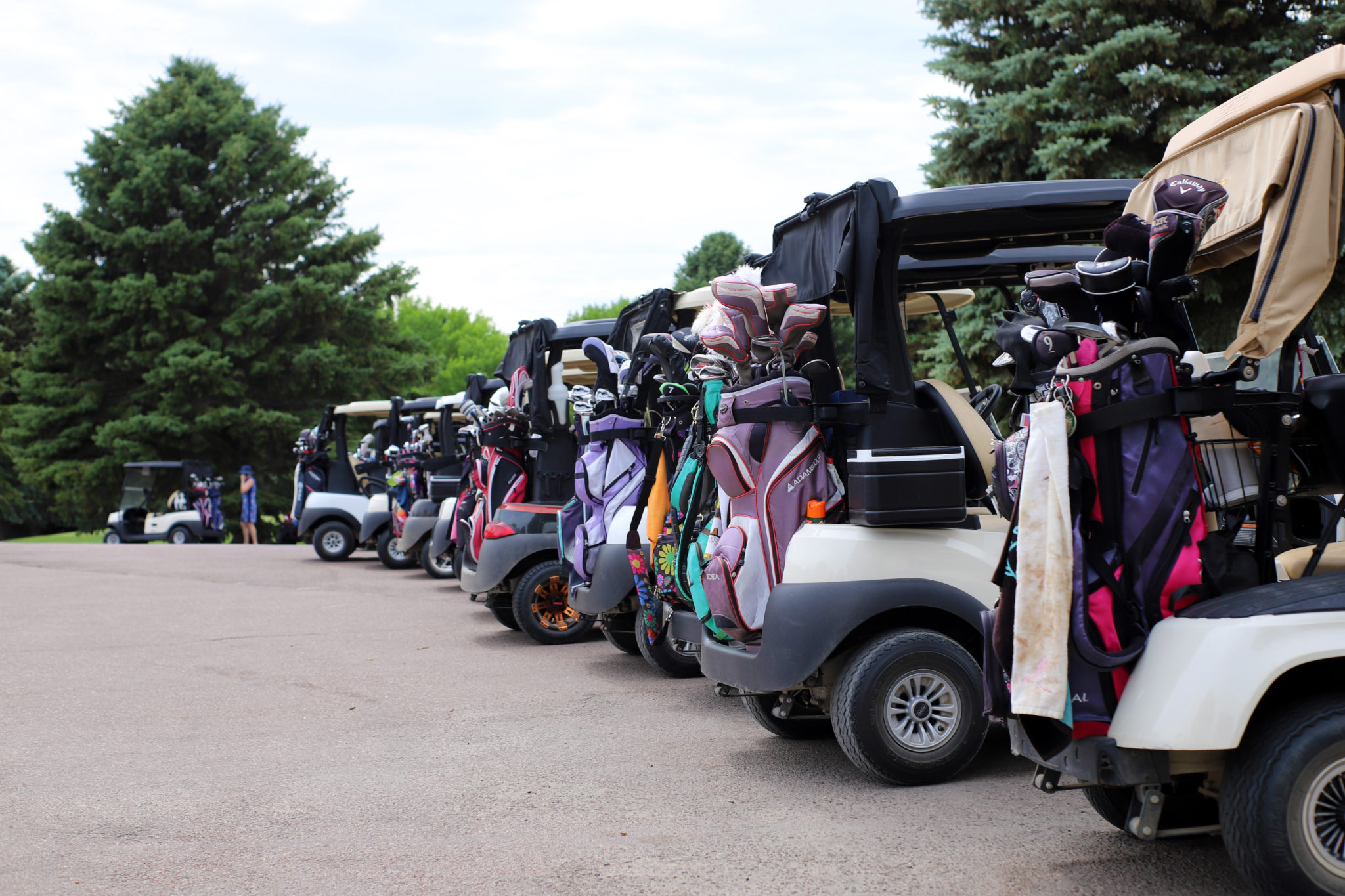 That’s how quickly registration for the Diamonds in the Rough Ladies Golf Tournament was filled in April. Two months later, on June 25, the Moccasin Creek Country Club welcomed 144 golfers to its distinguished ladies golf event. 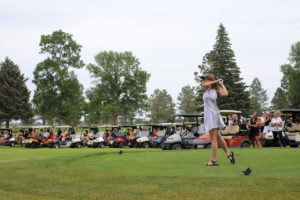 The golfers DITR surround the green in their golf carts as they watch the winners from each flight compete in the Diamond Derby.

A new feature that followed this year’s regular tournament included the Diamond Derby, where the winning team in each flight was eligible to compete. The golfers surrounded the green as the top teams competed for the Derby title, similar to what you would see at the professional tournaments. The members of the winning team for the 2021 Diamond Derby were Mary Jorgensen and Somer Schimke.

The country club has been hosting Diamonds in the Rough (DITR) for three years, excluding last year (2020) because of changes caused by the pandemic. Each year, the DITR committee looks to bring more than just golf to the attendees, and every year, they exceed everyone’s expectations.

“There’s ladies events around, but there’s nothing quite like this one,” Dean Zahn, Head Golf Professional at Moccasin Creek Country Club, said.

The key part in making this event a top tier ladies golf tournament is the group effort involved in the planning process. Everyone on the committee understands their role in the event. Dean and the DITR committee work each year to coordinate the golf tournament and the variety of bells and whistles for the event. In the end, it all comes together with the help of the Moccasin Creek Country Club staff and Aberdeen businesses.

One of the many things that the DITR committee prides itself on is its ability to feature Aberdeen in the tournament. Sponsors are listed inside the country club and a handful of local businesses came in as vendor partners. These businesses include Karisma Boutique, Lily’s Floral Designs & Gifts, Revive Day Spa, Conklin Clinics, Love to Travel, and Skal Moon Boutique. 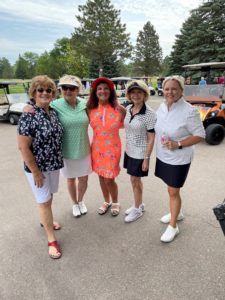 While the event may feature the businesses of Aberdeen, the tournament itself is not limited to only Aberdeen golfers. The popularity of the event has spread through word of mouth from previous participants and has even drawn interest from golfers in other states including Arizona, Nebraska, and Wyoming.

“I have been [to the tournament] one other time, and absolutely love your community and your golf course,” Beth Borgman said. Beth is a close friend of Amy Kessler, a member of the DITR committee, and she traveled to Aberdeen from Nebraska. A group of Amy’s friends who live in various parts of the country came to play golf and win prizes, but the best part about their reunion is spending time with Amy and friends they don’t often have a chance to see.

Another golfer who came from outside the state to take part in this annual Aberdeen event is the owner of Glove It and Aberdeen native, Karen Lovcik-Gleason. Karen was also among the sponsors for the 2021 tournament. Her Glove It golf gloves were added to the Swag Bag, and her business’s golf bags were one of the grand prizes for the winners as well.

“[The tournament] has a special meaning because it’s my hometown. So, I love participating in that,” Karen said. “Being a sponsor is just great! Going out to the practice range and seeing all of my products out there, it is like ‘Ooo, I did it!’…It is so great.”

With the tournament being in such high-demand, the anticipation for the big day for both the committee and the golfers is quite high. People will call during the weeks leading up to this event asking for any openings. This anticipation grows into excitement for the golfers and continues to build from the moment they register all the way to the day of the tournament.

The lively energy at the country club the morning of the event was palpable. Registration began at 8:45 AM, and even an outsider could grasp that this ladies event was already on its way to a successful outcome. The banter of friends reuniting filled the room as the staff buzzed around to make final preparations for the day.

As all the ladies arrive, greet one another, and prepare to golf, they are welcomed with a Swag Bag courtesy of the country club and event sponsors. Items in the Swag Bag are everything a lady needs for the day including a custom Glove It golf glove, raffle tickets, drink tickets, Pro V1 golf balls, hand sanitizer, sunscreen, sugar cookies, and champagne.

The Swag Bag is only the beginning of what the event has planned for its registered golfers.

“We bring the bling out here,” Amy Kessler said. 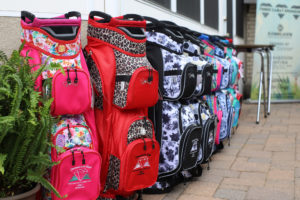 The featured prize of the day is sponsored by Glove It, owned by Aberdeen native Karen Lovcik-Gleason. Winners of the flights will receive custom golf bags from her business.

Some of the prizes include Diamond Dollars (which can be spent at any of the eight participating vendors including the Golf Shop), packages for raffles, Jewelry from Riddle’s Jewelry, and golf  bags from Glove It. There are also little “Diamonds in the Rough” sprinkled around the golf course that the ladies can earn during play as another opportunity to win Diamond Raffle Prizes.

One of the bigger prizes that the golfers compete for includes the Diamond Pennant. The winning team of each flight will go into a drawing for the Diamond. This prize replicates The Masters Green Jacket tradition.

Prizes do not just go to the best overall team scores. Players could even win a prize by having the worst score of the competition, so beginner players do not have to feel intimidated by the tournament. They can just focus on having fun, winning prizes in their flight, and golfing with their friends.

“The greatest thing about this event is that we made it so that it is welcoming for any level of golf,” DITR committee member Amy Blackstone said.

Whether you are looking to win the grand prize or simply sign up to have a good time, the Diamonds in the Rough provides a little something for any level of experience. And at the end of it all, everyone came together to catch up with friends, share stories, meet new people, and listen to live music by Seth Anderson, the General Manager at Pierson Ford.

The social event began at 5:00 PM, and the live music began after they announced the prize winners. People who did not golf but still wanted to join in on the raffle prizes and socialize with the golfers could purchase a ticket for the end-of-the-day festivities.

The Diamonds in the Rough Ladies Golf Tournament is a social competition that people really look forward to each year. With the professional white tent, local sponsors, Swag Bags, upscale decorations, energetic atmosphere, various games on the course and raffle prizes, and a social event with live music to finish the night, this tournament is the acclaimed ladies golf event of the region.

“It’s the ticket you want to have,” Amy Blackstone said.

To find out more about this year’s tournament and next year’s registration details, check out Diamonds in the Rough Ladies Golf Tournament on Facebook. // —Josie Clemens

2021 Diamonds in the Rough Flight Winners