People
A Coffee House or a Calling?
Dan Cleberg has set a high bar for serving Aberdeen citizens with his quirky, fun, and loving brand of building community.
By Susan Scrupski | May/June 2021 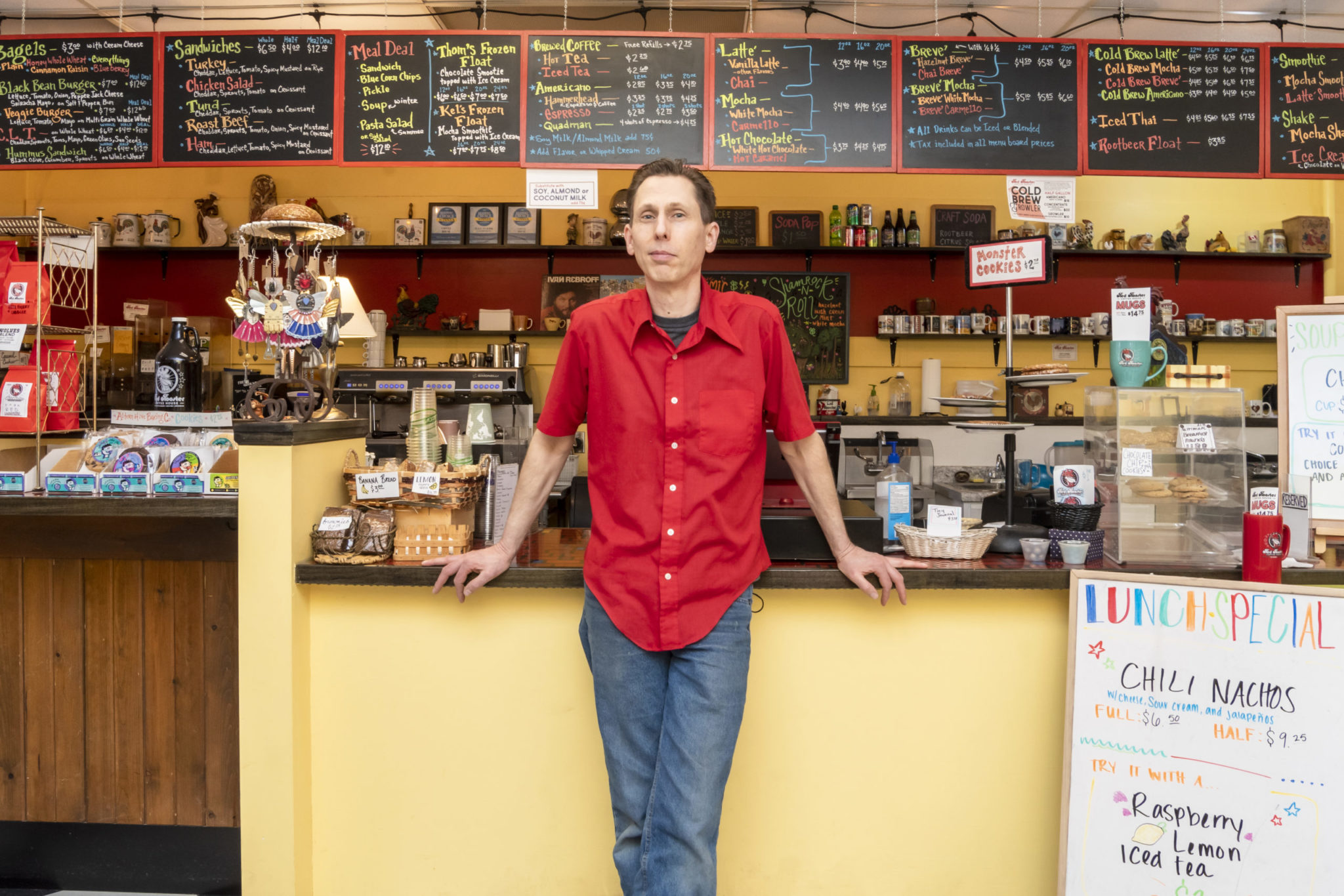 From the moment they first visited a coffee house in Hollywood, California, as kids, Dan and his sister Kileen had regular talks about what their own coffee shop would look like one day. In August 1996, they found out when they opened the Red Rooster in Aberdeen.

I was researching this story about Dan Cleberg, the owner of the famed Red Rooster Coffee House, when it hit me. This is a love story. It’s a love story about humankind, family, community, hometowns, and the love of the arts seen through the gift that self-expression brings to every artist– of every ability– and their fans.

As great stories go, it all begins– where else?– in Hollywood, CA, when a teenage Dan Cleberg headed out to Tinseltown with his 11-year old sister to visit his scriptwriting cousin, Michael, who was steeped in success with an office across the hall from Tom Cruise. Alas, the young Clebergs did not fall prey to the seductive glitz of Hollywood, but rather something more enticing. 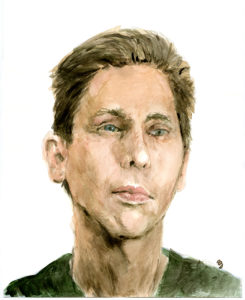 Michael asked Dan if he wanted to visit a coffee house. Dan didn’t know what a coffee house was but agreed to go along. “I walked into this magical place with wooden floors, a wooden bar… I had no concept of espresso at that point, but I knew coffee… and the smell of the place, plants growing above the menu, this jazz trio playing in the corner…I was like, ‘What is this amazing place?’” he recalled, reminiscent of that life-changing experience.

From that moment forward, the fantasy started to take shape. Whenever Dan and his sister Kileen (then Cleberg, now Limvere) would travel out of Aberdeen, they’d visit coffee houses in new cities.

“Eventually, we started saying, ‘When we have our coffee house, let’s have those things, and those tables like that, or lights like that,’” Dan said. He described it as a sort of game they’d play. They knew they were only kids, and it was fun, but over time the dream began to take root in their imaginations.

In the summer of ʼ94, after graduating from NSU and PC with a business degree, Dan met his lifelong partner. Angie Olson, now Cleberg, confessed to knowing instantly that Dan was “the one.” At a music festival in Minnesota, where they both camped every summer, their paths finally collided. “By the end of that week, I was like, ‘I’m gonna marry this guy.’ It was very fast, a very sure thing for both of us. That was in July. By August, we were saying, ‘Well, we should start dating since we’re going to get married. I guess we should get to know each other.’”

It was about this same time that Kileen graduated from SDSU. She and Dan began having weekly conversations about Aberdeen– what they liked and didn’t like, why people left, what would make people stay. “We thought about Aberdeen, and we loved the city. What could we do to make the city more interesting?” Kileen mused.

The Red Rooster Coffee House moved from fantasy to reality as a result of those heart-to-hearts. “When we graduated from college, we both said we always talked about a coffee house… let’s look into it,” Dan said. “That space on the corner was open, and it seemed like a good idea.”

Meanwhile, Angie had been working in Minnesota for a coffee house that was planning to shut down. One day her boss asked if they’d be interested in buying all her inventory. “The stars were aligned. She was ready to sell; we were ready to buy. We got it for dirt cheap. Everything fit in the back of a truck,” she said. Dan and Kileen arranged a small loan as startup capital from their mother for the coffee house, but other than that, there was no debt or financing involved. They purchased everything–the equipment, tables, machines– for cash.

The Red Rooster Coffee House, a.k.a. The Rooster, opened its doors on the corner at 202 S. Main Street in the Citizen’s Building on August 31, 1996. 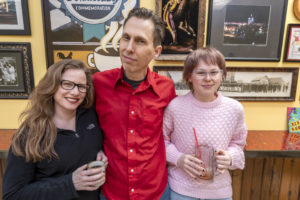 Keeping the Red Rooster operating for 25 years has been a family affair. Pictured left to right are Angie, Dan, and Zion Cleberg.

“I know people hate it when I say this, but …we were too dumb to stop,” laughed Angie when she reflects on those early days of getting the coffee house up and running. Dan described the 6 AM to midnight, seven days a week grind in the beginning as brutal. Soon after the coffee house opened, however, something strange and wonderful started to happen.

Dan explained it this way, “We were the only kind of community like this that we knew of in town, so musicians started hanging out, and artists started to put stuff on our walls. People who weren’t musicians or artists before were now identifying themselves as musicians and artists because they had a place to do it, a place to express themselves that way. We didn’t plan on it; we didn’t know that was going to happen. All these creative types started hanging out, and it would turn into filmmaking and other things over the years, and this great scene just started happening.”

Once the scene developed, there was no going back. The Clebergs had to keep the Rooster going even though money was tight. Angie described the social impact phenomenon that was developing, “The coffee house was almost beside the point. It just seemed the best vehicle for us to do community development. It was really about building culture and community and having a place where people wouldn’t feel isolated.”

The engine and inspiration for that connection, acceptance, and community is Dan Cleberg himself. Dan’s innate talent to work seamlessly and patiently with young kids and teenagers, the people with disabilities, city leaders, artists and musicians, and everyday coffee house patrons is known today by anyone in Aberdeen who’s had the pleasure of being involved in any of his many projects. Dan’s philosophy about his work at the Rooster, Red’s Market, and his nonprofit, The Fallout Creative Community, is centered on finding people on the outskirts and bringing them in, making them part of the community, and providing them an authentic sense of dignity and belonging.

The Rooster will celebrate its 25th anniversary this year at the end of August, and the impact Dan Cleberg has had on the city of Aberdeen is legendary. Scott Noeldner, director of accounting for Primrose Retirement Communities, had been coming to the Rooster for years, employed as a young accountant out of college working for Eide Bailly, whose office was right down the street. He started getting to know Dan when he interviewed him for the city’s annual Service to Mankind Sertoma Award in 2016.

“I realized that Dan was way more than even The Fallout Creative Community. He sees everybody in a way that I only hope I can some of the time. And he does it all of the time,” Scott said.

At his Sertoma banquet ceremony, Dan performed with Better Ride, his band. Before the evening was over, the typically formal membership attendees were on their feet, clapping and singing along. “That was a moment I knew that Dan was very special. All of these people came to support Dan and what he was able to create. We have not replicated anything even remotely close to that evening again,” Scott said.

Kileen Limvere was a full partner in the Rooster until 2018. She, too, sings Dan’s praises. “Dan would lose his shirt for the people in the community. He would do whatever it takes,” she said. What’s most important, however, is that they both stayed true to their original goals of making a difference in Aberdeen. She explained, “We wanted to be in the corner of the underdog. We wanted to be always on the lookout for people or organizations… I guess now you’d call them marginalized, but we wanted to get in their corner and support them. In a world where everybody is racing to be in the front, we thought the best way to be a part of a community is to look deep and try to help build it.”

Scott, who sits on a couple of boards, including the Aberdeen Development Corp., sees Dan and the Rooster as a role model for other entrepreneurs. “It’s a model for what’s possible. It’s what we want people to know that is achievable in Aberdeen– you can have your own business, make it your own unique thing, and give back to the community.”

From its meager beginnings, the Red Rooster Coffee House has had a positive impact on the lives of thousands and thousands of Aberdeen residents. Now, ready to celebrate its 25th anniversary this August 31, you can be certain that Dan Cleberg is ready to welcome you. No invisible people walk through his doors. The good people behind the counter see you and celebrate you for the unique individual you are. You are always welcome and have a place to relax, express yourself artistically, and engage with the community at the Red Rooster Coffee House.

Fall in love with a great espresso while you’re at it. // –Susan Scrupski 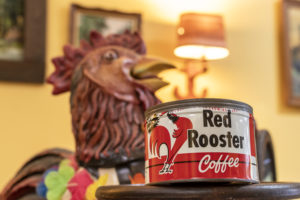 When Dan, Angie, and Kileen purchased the contents of the coffee shop where Angie worked in Minnesota, they liked how all the tables were bright red. They decided they wanted a vintage feel to their new coffee shop, not unlike their notion of how a grandma’s kitchen table would be decorated. They came across a coffee can featuring the brand Red Rooster and decided the name would be appropriate for their business. This particular Red Rooster coffee was a store brand of Super Valu stores. Several of these vintage cans can be spotted throughout the coffee shop.