People
From Somalia to Aberdeen
Mona and Burham share their journey of building a life in the Hub City.
By Sheila Richards | May/June 2021 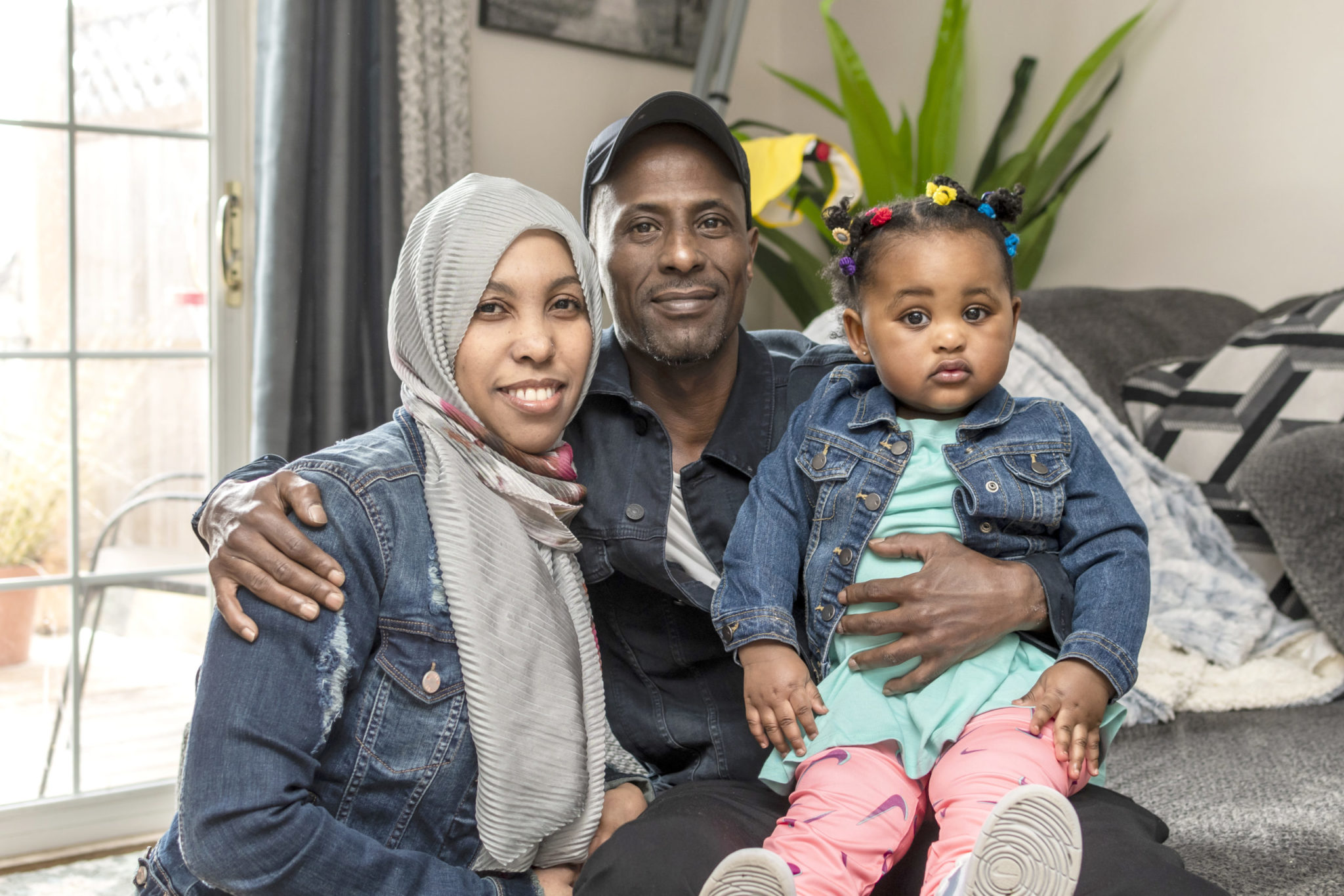 Mona, Burham, and their daughter Hoda pose for a photo at their home in Aberdeen.

“The street in front of us exploded. People were crying and screaming. As we ran for our lives in the chaos and confusion, we became separated. I found refuge in a restaurant.

Where was my sister, Nasra, who was expecting a baby? Was she alive?

After three hours, those of us hiding in the restaurant cautiously made our way to our homes. Thankfully, Nasra had gone inside a building, waited for the sounds of war to cease, and was safely home. We had been in the marketplace buying what we might need to leave Somalia (like shoes.) We knew the matter was urgent now and that we could not wait any longer. We would leave tomorrow.

For two months, we lived outside the war-torn city. Nasra gave birth to her baby with no help from a doctor or nurse or hospital. When we left Somalia, we slept on chairs in the airport in Dubai for three days and nights. We took turns sleeping, so someone was always awake to watch the children. We were able to leave because I had a friend in Pakistan who got the visas for us. We sold our land to buy the tickets. That is how we got out of our country.”

Mona continued to tell me her story of leaving Somalia, flying to a refugee camp in Pakistan, and coming to the United States. Nasra’s husband is still waiting (several years later) in Ethiopia to come to the U.S.

While in Pakistan, they learned English. It was also in Pakistan that Mona took one year of study to be a registered nurse. She and her two sisters and nieces and nephews were eventually flown to Tampa, Florida, where people were waiting for them. The family was taken to a nicely furnished home with lots of food, the 911 number to call for help, and the phone number of one of the greeters.

Mona said, “People were very nice but we did not know where to start to get a driver’s license or work.” They saw no other Somalis. Family members then suggested they come to Minnesota. They arrived in Rochester, where Mona, with her one year of nursing school, found work. Finding work in health care has never been a problem for her.

Still, Nasra wanted something different in schooling for her children and to live in a town with a low crime rate. Their next move? Aberdeen. Mona stayed for one more year in Rochester, and her plan was to move to Minneapolis to be near a school of nursing. Nasra told her, “Come here. Aberdeen has a school of nursing.” Soon, the three sisters and the children were together again. Community and family are what matter most. They are grateful for the people and agencies who have helped teach, mentor, and tutor the family in many ways and for helping them with citizenship in 2019. “The test was hard, but we were well prepared,” Mona said.

Prior to election day 2020, Mona and her family studied the sample ballot. On election day, a friend went with Mona to show her where to vote. She needed no other assistance. After casting her ballot, she went home to get her sisters and other eligible family members to the courthouse to vote. It was an important day, as was the day in Sioux Falls in 2019 when they became citizens.

Mona wants to be a registered nurse. Presentation College cannot accept her high school transcript nor the one year of nurse’s training from Pakistan, so she is working toward a GED to enter PC as a nursing student. She misses the food and the weather in her home country but doubts she’ll ever return.

“Somalia is a scary place. The memories are vivid and frightening.”

She enjoys the ease of getting from place to place in Aberdeen, the low crime rate, and the quiet compared to bigger cities. What’s a typical day like? She takes care of their daughter, Hoda. There is bathing, laundry, preparing food, house cleaning, and getting ready for her 4:00 PM shift at Mother Joseph, where she has worked for five years and become friends with some of her coworkers. Like many women in Aberdeen who juggle a job, family, and home, she has little time for much else.  In her free time, she likes exercising, walking, reading, and cooking. “Cooking is fun for me.”

“Soldiers were killing people everywhere. It was 1991. Fourteen of my family, including my mother, were killed. My father used his connections to help move my siblings and me from house to house to house. Eventually, we escaped Somalia to live for seven years in a refugee camp in Nairobi, Kenya.

My dream was always to come to the United States. While in the camp, I was the only one in my family working. People paid me to teach and coach their children in soccer. I had been a professional soccer player on a national team for two years. I also had a job in the camp as a dishwasher. Finally, I saved enough money to leave the camp, flying to Mexico. I came into the United States in San Diego. I cried happy tears when I entered this country. My dream come true.

I had no relatives or friends in the USA. It was expensive living in San Diego, and I could find no real job. I wanted to work. People told me to go to Minnesota or Wisconsin where I could get employment.”

Arriving in Minnesota, Burham first went to school, earned his GED, and took one year of college at Minneapolis Community College. He had applied with three leagues to play soccer, but language was too much of a barrier. He was able to move his father (now deceased) and siblings to Minnesota. When the family was settled and safe, Burham wanted to move for more job opportunities. He was living paycheck to paycheck. Transportation was long and difficult. For an eight-hour job, five more hours were spent commuting. The crime rate bothered him. He moved to Salt Lake City in 2009, where he owned his own business, a coffee shop, for one year.

Upon returning to Minnesota, Burham, still eager for regular work, studied a map. He did not want to be too far from family, so he Googled three cities in South Dakota and decided on Aberdeen. In 2013, he called Molded Fiber Glass and was told yes, he could apply for work, which he did and was hired immediately. He has worked at MFG for eight years.

Much of Burham’s story is similar to Mona’s. There have been many nice people who have helped him. In the first week, a landlord gave him the keys to an apartment, assuring him to not worry about the deposit until he had his first paycheck. He could not believe it! “He trusted me.” Another man at MFG provided transportation to and from work for two months and would not accept even one dollar for gas.

Yes, he misses Somalia. He was a young man, playing soccer. “I miss everything. The sky, the weather, everything I remember, I miss. I was in the prime of life, but many of my family had been killed and I had to start running.” I asked if he’d ever return. He said it is doubtful.

Burham goes to work at 4:00 AM and comes home around 5:00 PM to take care of Hoda. (Aunt Layla is there to care for Hoda for the few hours both parents are gone at the same time.) He does household chores, eats, and sleeps. On weekends, he plays soccer with some men (pre-COVID), watches the Vikings and the Twins, and listens to music. He also likes to dance.

Building a Life in Aberdeen

Mona and Burham married in 2018. They knew each other casually before coming to Aberdeen. Their daughter, Hoda, is nearly 18 months old, trying to walk and talk in English and Somali. The family lives in an apartment with great neighbors. One man brings cookies now and then with, “Hoda, I am here!” Another neighbor who loves to bake often leaves goodies on the stairs for Mona to see when she comes home from work. “She even calls to let me know when she is baking and invites me to come bake cookies with her. She is a snowbird to North Carolina, but the year Hoda was to be born, she stayed in Aberdeen, just in case we needed her, until after the birth.” Burham helps with chores and snow shoveling for the neighbors.

The family spends a lot of time at Wylie Park. “We love Wylie Park,” Burham said. I asked how being a father has changed his life. He said, “A lot. Every decision I make, I make twice. I was used to making decisions for myself. Now, I have responsibility. My mom and dad raised us well. I want to raise my daughter as I was, and it takes a lot of work.”

I asked about prejudicial remarks. He said if someone calls him a name, he will calmly ask the person, “‘What does that mean?’ It’s amazing how people are embarrassed and do not answer.” When he is told to go home, he replies, “I am home. This is my country.” Burham plans to become a U.S. Citizen. I asked what more he would like people to know. He said, “I want to return to college to have a degree in business management. Mona and I think about buying a home. Mona laughs at me, but I want to learn gardening. I want to coach soccer. I want to be a citizen. I want to contribute to our community. I also want people to know, the first thing I did when I arrived here was go to school to learn the language, to learn the good things about this country, and to learn to adapt to this new place. I want people to know more about me and my country before they make judgments. We come from different worlds, but now we are living together. Our future is to share and listen to each other’s stories, to get to know one another. I am so glad to live here to know different people. One man asked me if I knew about golf. I said no and asked if he, a man of 80, knew about soccer. He did not, so I showed him some soccer plays. Then, he took me to the golf course, gave me clubs and balls, and showed me how to play golf. This is how we learn to live with one another.”

As I was completing this phone visit, Burham called out, “Mona, it will be 60 degrees tomorrow. I think it’s warm enough. Let’s take Hoda and go to Wylie!” // –Sheila Richards