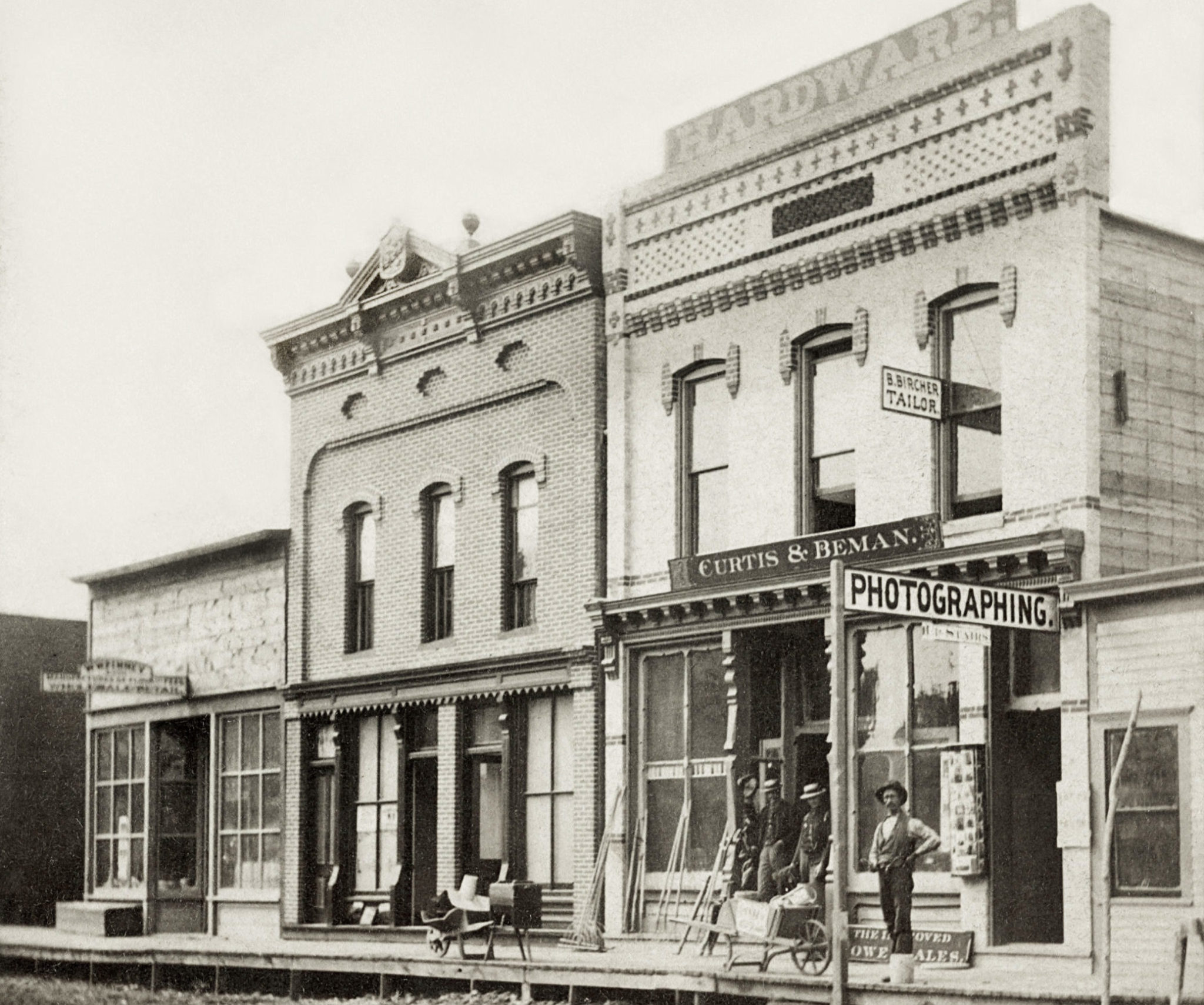 I saw this picture pop up on Facebook a few weeks back. The author of the post said it was from Aberdeen. But it didn’t resonate with me because there’s nothing in it that’s at all recognizable to photographs I’ve seen or our current streetscape. It’s also very rare to see pictures that include the raised, wooden sidewalks that kept people out of the soggy streets. Finally, the curved brick inset on the building on the left tweaked something in my brain. I had seen that before. If you were inside Noah’s Critters when it was last open or the Downtown Association’s Workshop, you’ve been in these spaces. The two-story, ornate building on the left is 210 S. Main (Noah’s Critters location), and the Curtis & Beman building is 208.

The large PHOTOGRAPHING sign is for J. Q. Miller, a photographer who came to Aberdeen in 1883. He moved into this building in 1884 as Aberdeen’s only photographer. You can see this sign move to the top of the building in later pictures (right). The Brown County Assessor records say that the Curtis & Beman building was built in 1884. However, the current 210 Noah’s building was built in 1962. So the ornate building was either completely changed or removed to make way for a new building. Judging from the Linpark Clothing sign, it had made an unrecognizable transformation by the 1950s. They both did, actually.

I couldn’t find a tremendous amount of info on Curtis and Beman other than they both came from Auburn, NY, and started a retail/wholesale business of stoves, lubricants, gun powder, and hardware. They had two warehouses near the tracks but decided to open a store on Main Street too. However, they quickly abandoned the retail trade and went strictly to wholesale, leaving this location by 1885. Beman’s wife died in 1886, and he disappeared from the Aberdeen scene soon after. Curtis moved to Chicago in 1891 but still ran a business here along with H.H. Hungerford. I was not able to determine if this business continued as some other name or eventually dissolved. The 210 building on the left has no markings/signage whatsoever, suggesting it might be brand new. Because Curtis & Beman moved out in 1885, I would date this photo sometime during the years 1884-5. //

This photo is actually half of a stereographic card produced by J. Q. Miller. The other half contains an identical image, but it has an offset blur to create a 3D effect when viewed through a stereograph.

This is a composite image made from three separate photos from the Brown County Assessors office. These pictures were all taken in the mid-to-late 1950s. The only identifying attribute to either of the two is the curved recess in the second-floor brickwork on the 210 Linpark building. The brick has been completely stuccoed over, and vitrolite glass now adorns the first floor. 208 (Mister’s) is completely unrecognizable.

These two buildings can be seen through the years, eventually being flanked by larger buildings such as the 1891 Building and Loan Association building (R.E. Huffmans/Studio 9) to the north and the 1889 Fletcher & Fisher Real Estate building (Plymouth Clothing/Sammy’s) to the south.