Your City
9/11 in Aberdeen: 20 Years Later
Aberdeen locals remember the tragic event that struck the nation on Sept. 11, 2001.
By Patrick Gallagher | September/October 2021 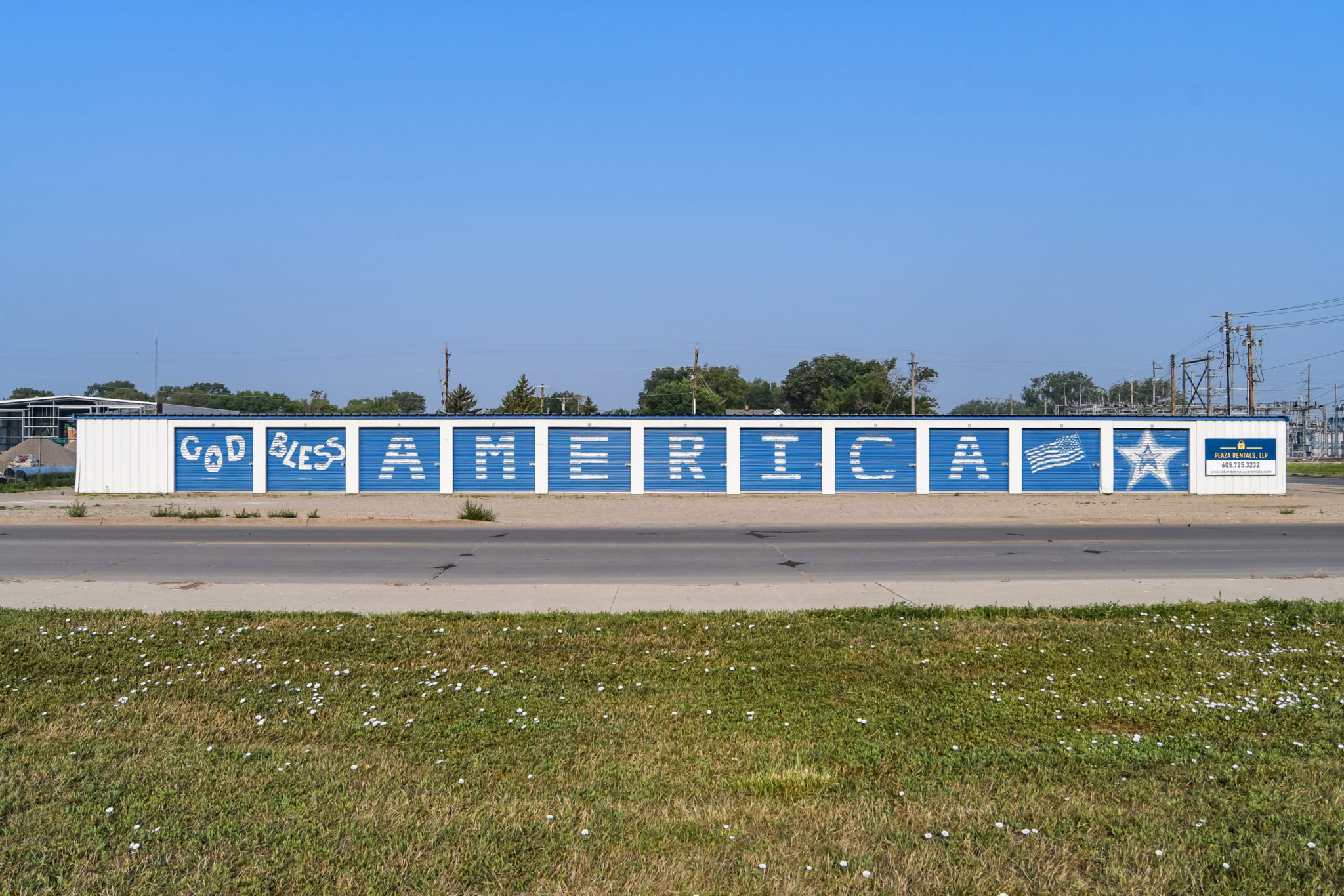 This mural on South Fifth Street near the corner of Third Avenue Southwest was created days after the attack. It has significantly faded over the last 20 years. Photo by Troy McQuillen

On Sept. 11, 2001, Aberdonians awoke to Aberdeen American News headlines about construction of the new Central High School, a resurgence of whooping cough, and portentously, surveillance cameras at Webster’s school. The next day, the front page shouted, “America Stunned” after the terrorist attacks in New York City, Washington, D.C., and Pennsylvania. For the twentieth anniversary of 9/11, Aberdeen Magazine asked several people to share memories of the day and its impact in the Hub City.

The Day We Will Never Forget 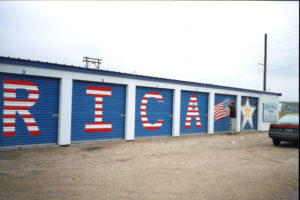 Just a few days after the attack, a group of NSU art students were contacted by Joan Russell, owner of the storage facility on South Fifth Street and Third Avenue Southwest. She requested some sort of artwork to be done to instill patriotism in Aberdeen. The artists who worked on this mural are Sara Hemquist, Jodi Klett, Lisa Wagner, Roberta Goldade, and Nick Fischer. Fortunately, Goldade took pictures and saved them. She provided the prints for us to use.

On the morning of 9/11, the mayor at that time, Tom Hopper, was in a meeting in his office when his secretary said a plane crashed into the World Trade Center. Turning on the TV, they saw the other tower “hit by the second jet, and then soon, the third jet crashed into the Pentagon.” Soon after, “Governor Bill Janklow called me to say he wanted to meet with the mayors of all the larger cities in South Dakota at his office in Pierre,” Tom said. On his drive back after the meeting, Tom noticed “how quiet and strange the skies were since all airline flights had been grounded nationwide.”

City Safety Commissioner Jacki Omland was teaching at Central when she heard about the attack, and “We had to scramble to close the airport and put barricades up,” she said. People who had boarded the 8:48 AM Aberdeen-Minneapolis flight had to deplane.

Other local facilities were also affected. The U.S. Army Reserve and National Guard were on high alert in the morning, and armed troops guarded the Aberdeen Armory. Several Federal Building offices closed before the end of the day. “As a federal employee, I think most of us were more aware of our surroundings,” the Bureau of Indian Affairs’ Tom Croymans said, because “only six years prior to that the Oklahoma Federal Building was bombed.”

Beth Smith, area director for U.S. Senate Majority Leader and Aberdeen native Tom Daschle, remembers the Senator’s mother “being whisked away to safety as a precautionary measure” by Aberdeen Police.

“I remember how the country came together. It wasn’t political. Just real concern for all that were involved.” -Deb Knecht, County Commissioner

Aberdeen schools faced decisions whether to inform students about the attacks, but they found out regardless. State senator Mike Rohl remembers being headed to elementary school music class when his teacher heard the news from a secretary. “We then diverted to the gym to watch on TVs,” he said. Public school superintendent Brad Meeks asked principals to review the district wide crisis plan. Roncalli president Stacy Levsen remembered “talking with students and staff members who had friends and relatives living in Manhattan and trying to assist in contacting them to ensure they were safe” as she worried about her own son who lived there.

The newspaper covered several local families with similar concerns. “We looked for all of the local ties we could find,” said Scott Waltman, a reporter for the News. “We also had an afternoon edition. It’s the only special edition of the American News I can recall in my lifetime.”

Some Aberdonians experienced 9/11 from across the sea and on top of the world. While Aberdeen Magazine publisher Troy McQuillen and his wife traveled in England, a family member picked them up and said, “It’s World War III in the U.S.” Later, when they were on a bus in France, during the international moment of silence, “the traffic on the freeway came to a gradual halt—not a traffic jam—and we sat in eerie silence as the world halted,” Troy said.

Super 8 Attorney Harvey Jewett’s group was temporarily stranded while hunting geese near the Arctic Circle after their plane was grounded because of the attacks. With little communication and no pictures, “we thought [the buildings] tipped over sideways. We kept speculating how close it came to 42nd Street,” Harvey said.

State representative Carl Perry, then at Aman Collection Service, noted, “I thought it was good to see many people turn to God.” Expressions of faith were frequent. Among them, Roncalli High School had a prayer service on the afternoon of Sept. 11. Bethlehem Lutheran Church held a community prayer service that night, and the next morning, Rev. Harold Salem held a radio prayer broadcast on KSDN.

At the airport, flights resumed Sept. 13. Tuesday morning’s grounded plane took off Thursday evening. Before 9/11, passengers did not go through security in Aberdeen but in Minneapolis when catching connecting flights. Afterwards, installation of increased screening at the airport was accelerated. Among many who commented on airport security, Jacki Omland said, “I am getting used to taking my shoes off and putting all of my carry-on things in a bucket on a conveyor belt. Every time I do, I still remember 9/11.” Within days of the attacks, Governor Janklow called for “tactically equipped” personnel at airports, and National Guard troops patrolled the terminal.

“9/11 was a great uniter of people in the United States. It doesn’t feel like major events do that nowadays.” -Scott Waltman, Aberdeen American News

Police Officer Jay Tobin foresaw their work being “affected by the security measures being discussed,” which Mayor Hopper said exceeded city resources. Enter the Federal Department of Homeland Security, created in October 2002, which funded security needs. That funding helped many institutions, including schools, install security cameras, as Webster was before 9/11.

In response to 9/11, many people wanted to give back. Brown County Commissioner Mike Wiese signed on as a reserve police officer, and Presentation College religious studies professor Martin Albl joined the rural firefighters. Many joined the military, and those already enlisted prepared themselves.

Tom Croymans, now retired from the National Guard as a Brigadier General, said he “knew there would be a response from the United States at some point, but during that day and in the days immediately following, it wasn’t exactly clear who or where the response would be focused.”

“Unfortunately, I think the fear and uncertainty that was instilled has put many people on edge and many over the edge. That fear, uncertainty, and distrust has since been passed on to the next generation.” -Jacki Omland, City Commissioner and Central Teacher

For Sarah Bierman, a student who had been in the National Guard for a little over a year, the attacks “resulted in a deployment to Kuwait/Iraq in April 2003 for 14 months.”

Beth Smith remembers hundreds of calls from people asking what they could do to help, and there were many opportunities. Blood centers reported an overwhelming response to calls for donations. Numerous fundraisers supported rescue and relief efforts. In addition to the Salvation Army and Red Cross, local firefighters raised money, and Brown County farmers and ranchers donated grain and livestock. The Walk for New York—from downtown to PC and back—raised over $4,500. In a kind of foreshadowing, the Aberdeen 3M plant donated thousands of facemasks to rescue workers on the East Coast. Many impromptu tributes to victims sprung up around the area. Northern students made red, white, and blue ribbons to wear.

“My initial feelings were that the world changed that day. We were no longer as safe as we were the day before and would never return to that previous condition.” -Tom Croymans, BIA and National Guard

Because the terrorists were Islamic extremists, President George W. Bush called on Americans not to scapegoat Muslims. In that spirit, churches and service organizations invited Martin Albl to do presentations on Islam. He wanted to discourage “sweeping generalizations such as ‘Islam promotes terrorism’” and remembered, “people seemed genuinely interested in learning more about Muslim beliefs.”

With the possible exception of the pandemic, perhaps nothing since World War II has impacted America more than 9/11—challenging assumptions and solidifying beliefs. State representative Al Novstrup said, “9/11 reinforced to me that there are people who are evil and want to destroy the USA. I believe in a strong country and a strong military to deter evil.”

“It has not changed my beliefs of race or people,” said current Brown County Emergency Management director Scott Meints. “I do think we need to do better screening of folks coming into our country, and if they have not so nice backgrounds, they maybe should not be allowed in. But not all people are bad, so just locking the door is not the correct answer either.”

Beth Smith has detected a “much deeper mistrust with government” among some people, pointing to conspiracy theories
that “perhaps our government was in on it; that our government used this to strip us of our privacy.” She added, “The deep confusion, anxiety, unknown is something that has stuck with me; yet it also did much to unite us.”

“My life was affected by appreciating family and friends and to recognize life is a gift and how quickly life can end.” -Tom Hopper, former Aberdeen mayor

Despite the shock of the attacks, life went on in Aberdeen. Some activities were cancelled or delayed, but many went on as planned. NSU celebrated its centennial the weekend after 9/11—preparing everyone for cannon blasts after touchdowns during the football game. Other local sports continued, even on the night of Sept. 11.

Maybe the lingering effect of 9/11 is that feeling of looking over one’s shoulder. “It’s been twenty years since we’ve had an attack on the homeland, but we need to stay vigilant,” Tom Croymans summarized. “We have to remind ourselves of what happened that day lest we forget and become complacent and risk history repeating itself.” //

On October 7, 2001, the United States launched an attack on Afghanistan in retaliation for harboring the 9/11 terrorists. It became America’s longest war, coming to an end just recently, only a few months before its twentieth anniversary.