Art & Culture
A Peek Behind The Curtain
Storybook Land Theatre has brought decades of family-fun entertainment to Aberdeen.
By Josie Clemens | July/August 2021 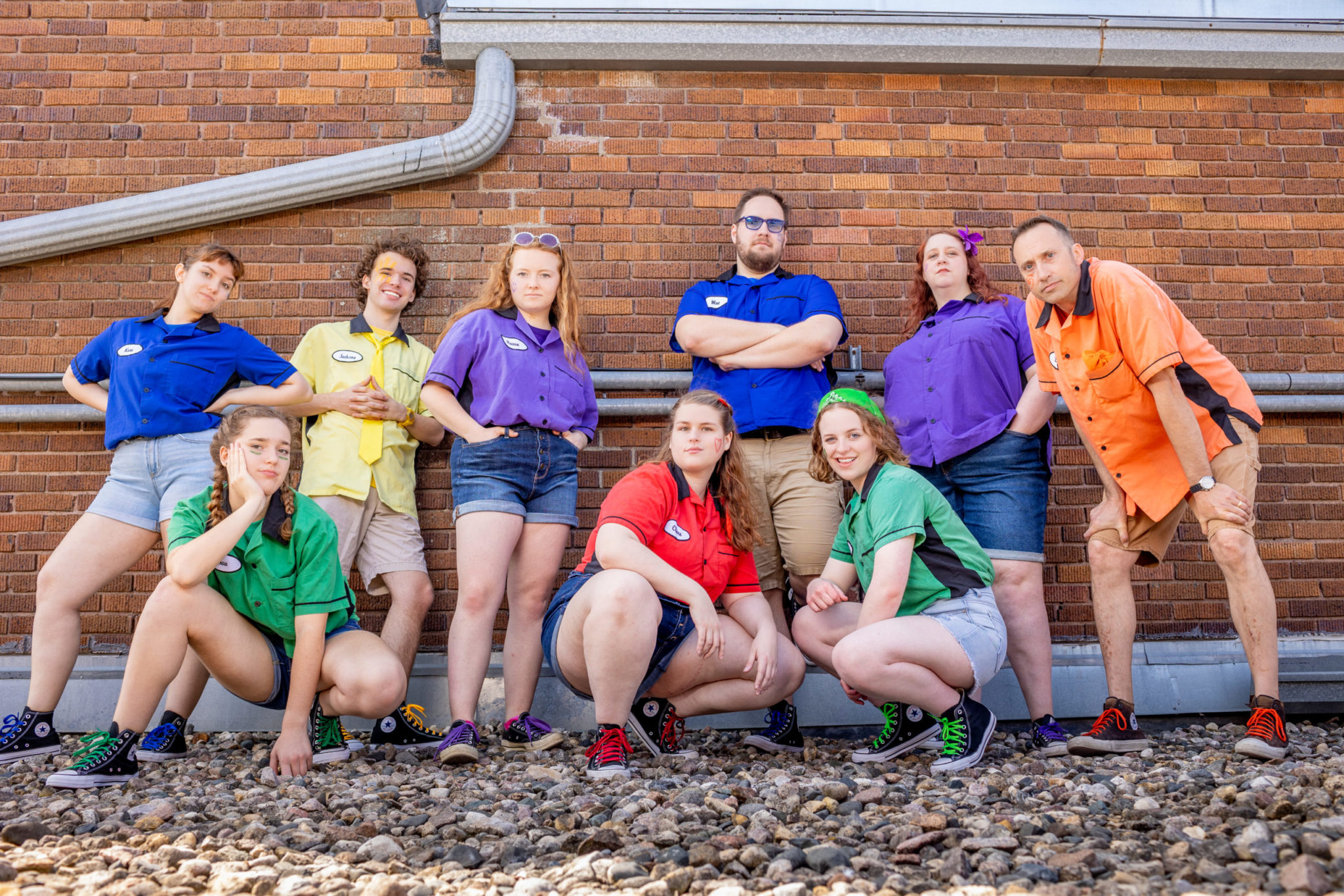 The Storybook Land Theatre (SBLT) takes its audience to a magical place full of positivity, laughter, and imagination. The cast members share an abundance of energy through each performance, and the scripts are full of life and creativity. A combination like this is hard to find anywhere else and brings a one-of-a-kind series of shows to the people of Aberdeen.

The best part? Well, there isn’t just one, but the plays are designed to entertain everyone, not just children. Whether you have children of your own or are in need of some light-hearted, comedic entertainment, this summer theater has something in its playbook for you. And while the audience can see the cast during the summer plays, there’s much more to this family-friendly theater than what is seen on stage.

This story begins back in 1987 with the creation of the Storybook Land Castle.

David Eckert, the Aberdeen Recreation & Cultural Center (ARCC) supervisor, led the development of the program under the city’s Parks and Recreation department as he searched for ways to draw people to Storybook Land and, more specifically, the Castle. After carefully considering all the options, David realized he wanted to provide an entertainment and arts event at the Castle in the hopes of bringing more people to the newly created park.

David felt inspired by the idea of an outdoor children’s theater and hired Tom Roberts, who grew up in Ipswich, SD, and attended college at NSU, as the director.

The grand opening of SBLT took place in June of 1989. Tom and four actors–a mixture of high school and college students–performed a different play every week, three times a week. This carried on for four weeks, and the response was beyond successful. Over 3,500 people attended the 12 performances.

The success of the program led to its inevitable expansion, which has caused a slight shift in the program’s goals. The primary purpose will always be to bring crowds to Storybook Land, but the priority is not as high due to the park’s growing popularity. David mentioned the Theatre is strong enough now that it draws in visitors from outside the community, which is good for the economy and improves the overall quality of life in Aberdeen.

Another priority of the city for SBLT is to look for development and growth opportunities for the program. The idea of providing fun and quality entertainment to Aberdeen that brings the community together will always be at the core of the Theatre’s decisions.

David’s favorite part about the theater is “seeing how much the audience appreciates the show.” He continued, “I can see it in their faces, in their laughter.” His pride in SBLT resonated as he described witnessing the happiness it has brought to so many people in the Aberdeen area.

Aberdeen’s support of SBLT has been nothing but positive since the opening performance in 1989. “From day one, what’s amazing to me is that the response, enthusiasm, and acceptance has never diminished,” David said.

In 2000, Storybook Land Theatre hired a new director, Brian Schultz, who has remained the Artistic Director of SBLT for 21 years.

“To be able to continue doing this after all this time is truly a blessing. Going in, I had never really given much thought to how long my tenure might be, but to just enjoy it as long as it lasts,” Brian said. “I’m so pleased that now, all these years later, it’s even better now than when I started.”

Brian is also the Associate Artistic Managing Director for the Aberdeen Community Theatre (ACT) coinciding with his responsibilities at SBLT. While Aberdeen Parks and Recreation still oversees the development and programming of SBLT, the city has a contractual agreement with ACT in which ACT provides directorial services for SBLT. In other words, Brian was able to continue as the director for SBLT even after he started working for the community theater.

“Folks don’t often get careers in which they are given the freedom to do everything they want to do, the way they want to do it. But I’ve been lucky enough to have that,” Brian said.

David described Brian as someone who is always full of energy, enthusiasm, and excitement, and he did not want to lose that spirit and charisma.

Brian’s journey in the Aberdeen arts began with the Storybook Land Theatre. In 1994, he moved to Aberdeen to attend NSU, and he first experienced the Castle when a friend gave him a tour of Aberdeen. It wasn’t until a couple years later that Brian was introduced to SBLT and began acting with the program.

“I kind of lucked into it, and it still remains one of my favorite things that I have ever done and still get to do,” Brian said.

Brian’s work at ACT includes planning mainstage events and programming details alongside developing education programs for both youth and adults in the community. Youth theater has been his primary wheelhouse since the children’s theater out at Storybook Land, and he has been able to continue that passion with the Young People’s Theatre through ACT.

Directing SBLT for over two decades, Brian has been able to experience the growth of the program first-hand. One area Brian described when talking about the evolution of the program is the development of music from outside recordings to a live band.

“Normally, if you go to a show, you’ll hear just some recorded music playing–you know, just peppy music,” Brian said. This enabled the Theatre to give the audience something other than silence to listen to while the cast was preparing for their performance. “I don’t even remember when we started, but I grabbed my guitar and just started noodling around with some songs. I thought it would be more fun to listen to than just piped music.”

The theater group has now formed a “band” that has been rising in talent and increasing in popularity within the community. Requests have been sent in to SBLT to simply perform their music at various events around the Aberdeen area. They have a repertoire of 60 songs that the cast members can pull out at any moment’s notice. This is just one of many examples of how much Brian has contributed to the development of SBLT.

“The steadiness and inspiration that my coworkers provide me will likely go far in helping me move forward. SBLT and, more specifically, Brian, has taught me to push my limits and solve problems—skills which translate well to many other areas of life,” violinist and cast member Kara Sinar said.

David, as the supervisor of ARCC, said the third and final purpose of SBLT is to provide an opportunity for people to work in the arts and receive education and training to help them craft their skills before taking the next step in their career, whether it is for a college education or another job.

That is what sets the Theatre apart from similar ones in the area. It enables the cast to obtain a pre-professional theater experience, giving them experience on how to both perform and teach in the arts. Brian holds everyone to a high standard of excellence, which is easy for him, he said, because everyone in the cast is already so devoted to SBLT and its mission to bring fun and entertainment to the community.

“Being on the castle stage feels like home,” vocalist and cast member Emily Davis said.

When the cast is exerting all their passion and commitment to their performance and they love what they are doing, that energy and excitement is bound to carry over to the audience. It is what makes SBLT so special to the Aberdeen community.

Even though the cast makes the job look simple and light-hearted, an abundance of time is spent perfecting the nuts and bolts of each performance.

“I think part of the magic is making what we do look easy, and look like tons of fun,” Brian said. “We rehearse five days a week, many times working up to three different shows each day.” With all the time they spend together vigorously working to memorize a show in under three days, Brian and the cast have become more like family than coworkers.

And with the challenges SBLT faced last year due to the global pandemic, the cast is more than ready to venture back to their usual summer schedule in the Castle.

“This summer is going to be so much fun!” sound tech Sadie Raap said.

Each show is performed three times a week at 10:00 AM Tuesday and 7:00 PM Wednesday and Friday. SBLT was also a part of the Fourth of July Celebration at Wylie and will perform in the Storybook Land Festival on July 24.

An intriguing feature for many of the stories will be their twist on classic fairy tales. Brian also shared his excitement of returning all of their music components and continuing their tour. The tour is an encore of sorts that allows SBLT to embrace their creativity and originality to towns outside the Aberdeen area.

How can you support SBLT this summer?

According to Brian, “As far as the survival of the program, really, that’s all on the city, so we are able to keep it free for the public. Just the fact that they come out and watch and enjoy the shows and tell all their friends about it is the greatest support they can offer.”

So, stop by the Castle during its showtimes to see the creativity and joy of the cast and experience the magic of SBLT for yourself. //