Your City
Elm Lake Dam Project Is Underway
Construction on the spillways northwest of Aberdeen repairs damage and ensures safety standards are being met.
By Connie Sieh Groop | July/August 2021 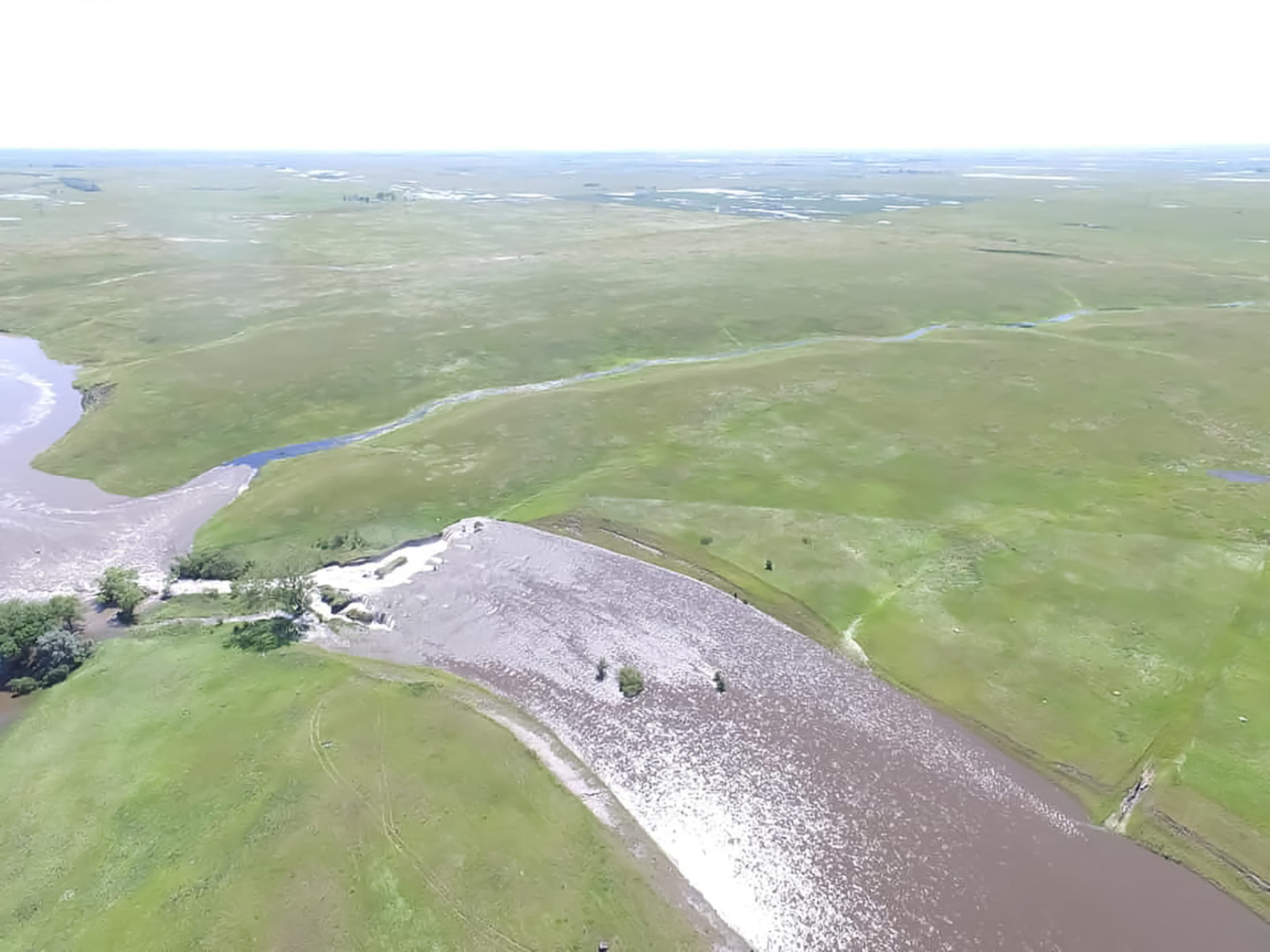 People give little thought to the age of dams. The bulwarks across the country safely hold back water to create lakes for recreation and, in many cases, serve as water supplies for cities and towns. Only when the structures erode do people get concerned. After a fierce storm in northern Brown County last summer, officials deemed the damage to the dam at the south end of Elm Lake critical. It might cost up to $7 million to repair the structure built by Works Progress Administration laborers in the 1930s.

“The spillway is more than 80 years old and has reached the end of its anticipated life,” the commissioner of South Dakota’s Office of School and Public Lands, Ryan Brunner, said. “We’d been looking at replacing it. During last year’s storm on July 24 and 25, some panels broke off, which pushed expected repairs on the dam into a much tighter time frame. This year’s South Dakota Legislature appropriated $9 million for School and Public lands projects, with about $7 million estimated for the Elm Lake Dam about 45 miles northwest of Aberdeen.”

The South Dakota Office of School and Public Lands oversees inspections and repairs to 98 dams in South Dakota, including this structure. According to newspaper accounts, Aberdeen received permanent rights to the top 12 feet of water in Elm Lake for $15,000 in 1937.

According to Aberdeen City Manager Joe Gaa, “The Elm River is a major source of water for the city of Aberdeen. In a normal year, we don’t take too much from Elm Lake but in a drought year, we depend on it as our backup water supply. Willow Dam and the lake in the same watershed is the city’s primary backup.”

Because of that, the city of Aberdeen pledged $1 million towards the project.

Requests for bids will be made this summer and should result in late summer/early fall construction. Ryan said, “Our goal is to get the primary concrete spillway done this fall or early winter and finish up repairs on the secondary spillway in the spring of 2022.”

Elm Lake dam is 42 feet high and 1,000 feet long. The primary spillway is concrete, 150 feet wide with an 8-foot freeboard. The second spillway is earthen. The lake holds about 5 million gallons of water. 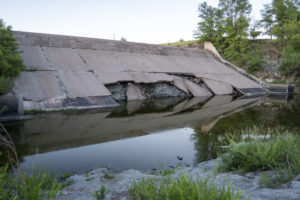 Collapsed spillway on the south end of Elm Lake. Photo by Troy McQuillen

Initial repair estimates increased because the dam does not meet high-hazard standards. Changes to the structure need to be made to limit the potential for damage and loss of life downstream from the dam. This year’s appropriation will provide funds to complete the work plus money to help with repairs at Richmond Dam and other state-owned dams.

The work will slightly more than double the output the two spillways together can handle in a high flood event. “That July 24-25 storm almost overtopped the dam. It was inches away from eroding out or causing significant damage downstream,” Ryan said.

To begin construction, “We can use the floodgates to manage water,” Ryan said. “We will build a temporary cofferdam at the top of the spillway to keep water from going over it. If there is a high flood event, we will route water into the emergency spillway.”

According to Ryan, the primary spillway will be replaced completely. The plan is to widen the dam to 170 feet, allowing for more water to pass over the dam, even in normal circumstances.

“This will add a lot of capacity. The work will replace the primary stilling basin with a concrete stilling basin, which will slow the water and prevent breaches,” Ryan said. It will raise the crest of the spillway’s dirt embankment by 4.5 feet but leave the spillway at its current level. “These changes will mean the spillway can release more water in a high-water event but will not raise the lake level. This will meet those high-hazard safety levels.”

There are signs that this may be a drought year and precautions are under way to conserve resources for the city of Aberdeen. “When it comes to the dam, it affects our potential as they lower the level to start construction. It takes away some of our initial water supply, but we are going to make sure our other water sources are up to par,” Joe said.

Aberdeen City Engineer Robin Bobzien said, “We use the water from Willow Dam as our primary source and Elm Lake as our secondary source. Elm Lake is a recreational facility, so we leave the water until we need it in town. This summer, the bottom line is we will lower the water as needed to facilitate construction of the dam. We plan to pump any excess into Willow Dam so that it will be full.

“If we face a several-year drought, we don’t want to deplete our potential sources,” Robin said. “During construction, they will release four to five feet of water through the emergency spillway to lower the water in Elm.” 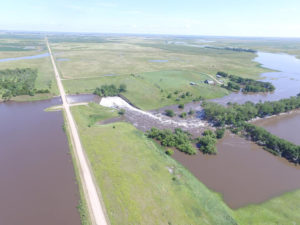 The southern end of the Elm Lake Dam damaged from the storm in July 2020. Courtesy of Kevin Barton – Chief, Frederick Fire Department.

Robin believes most people in Aberdeen know—or they should know—the Elm is one source for their drinking water. “We are truly fortunate to have it. Without it, in dry years it would be difficult to have enough water to go around.”

Joe pointed out that the people of Aberdeen should notice little change in their water supply. He said, “It’s important to understand we don’t use the water from Elm Lake all day, every day. Most of our water comes from the Elm River. About twenty-five percent comes from ground-water wells.”

Robin said that as an example, last year, neither the Willow nor Elm dams were open, except to check the valves and make sure everything was functioning properly. There was sufficient water coming down the Maple River that runs through Frederick to feed into the Elm River.

Joe said with concerns about potential drought conditions, they want to make sure they are good stewards of this precious resource.

The bridge over the dam needs to be removed for construction and an alternative location of the boat dock on the west side of the lake is being considered.

“The cost to move the boat dock is a lot less than putting in a new bridge. We will work with the southern lake access in the short term and in the long term, we will relocate the boat dock. How that will be done hasn’t been decided. Our focus is getting the spillway replaced. We have to meet state and federal dam safety regulations,” Ryan said. 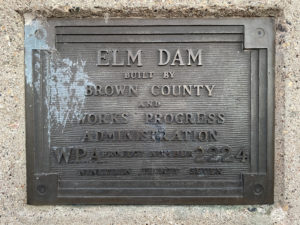 While current sources meet Aberdeen’s water needs, the city is funding a study to explore a pipeline, which would bring water from the Missouri River to Aberdeen. Looking to the future, Joe said, “There is no room for industrial growth. They built both the water plant and the wastewater system for a smaller residential community with limited industrial use.

“We have a couple of industrial users that are taxing our system and are looking at expanding. We need to grow.  I think there are some opportunities given our location with agriculturally based industries or customers that want to come here. We are looking at the big picture of how we expand our water and waste-water systems. If we are going to do that, we need additional water. I think we’ll find that’s probably going to be really costly.” // 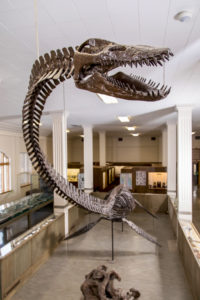 In 1945, 14-year-old Don Neff of Frederick scooped up some shiny brown enamel teeth about two inches long. Don was excited with his discovery, which turned out to include the bones of a 29-foot mosasaur—a type of aquatic reptile that lived from 65 to 95 million years ago. The creature, dubbed– “Freddie” –was found just below the Elm Lake Dam. Don’s mother, Margaret Neff, contacted the South Dakota School of Mines and Technology (SDSMT) in Rapid City about the discovery. Scientists extracted the skeleton. The creature is in a family of extinct aquatic reptiles related to modern-day monitor lizards. Dr. Darrin Pagnac is the curator of fossil vertebrates at SDSMT and said this mosasaur is one of the most complete fossil specimens of its kind. Pagnac said interest in this giant lizard continues, even though it is far from its resting place in the mud of the Elm River Valley. The bones from the site 10 miles west of Frederick are on display 350 miles away at the SDSMT’s Museum of Geology in Rapid City. 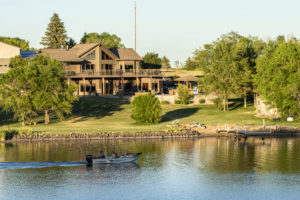 For many years, few cabins dotted the shores of Elm Lake. Today, it is a vibrant community with more than 75 homes and a resort that offers camping and caters food, drink, and conversation to those who enjoy fishing and boating.