People
The March to Tame Polio
Learn about the history of polio in Aberdeen and how natural concern led to city-wide action against the virus.
By Patrick Gallagher | July/August 2021 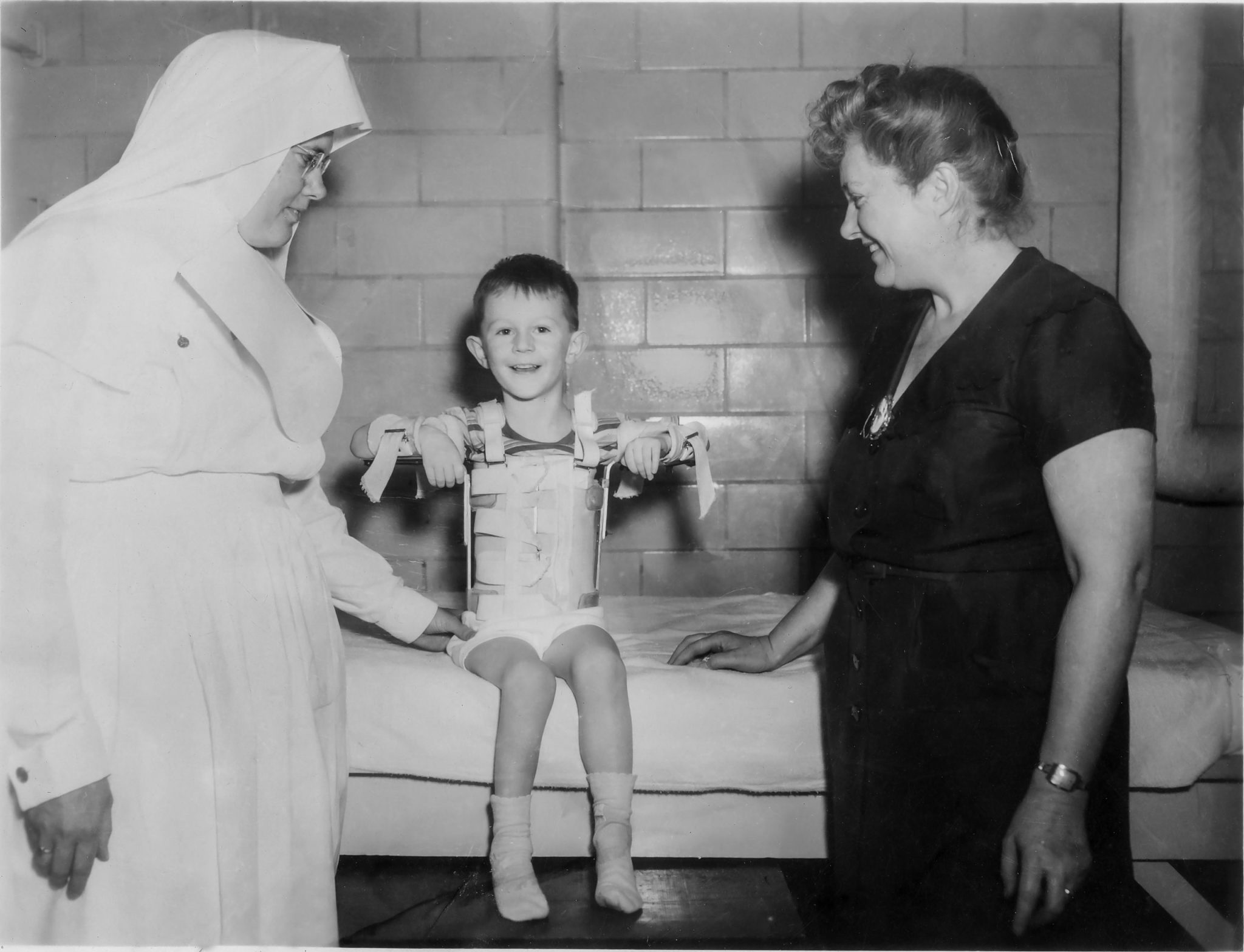 Virtually unheard of today, polio once struck fear into American parents. Even though the disease affected relatively few people—its worst year … 150 million people—it earned perhaps outsized attention, especially because many of those who suffered were children whose symptoms could be devastating. This includes Aberdeen.

By the 20th century, polio became a fairly common occurrence, particularly in more developed countries, perhaps because better hygiene reduced early exposure to germs that would confer later immunity. The vast majority of polio cases involve minor or no symptoms, but it is best known for the minority of cases in which patients suffer paralysis or, more rarely, death. Because many victims were children, it earned the name infantile paralysis, but it didn’t only affect the youth. 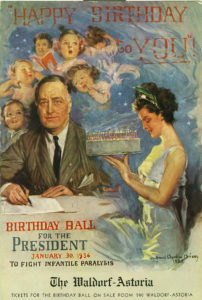 Despite relatively few victims, polio benefited from intense public awareness, by natural concern at first and later aided by more intentional guidance. It would be in 1946 before polio fundraising invented the concept of the poster child, someone who personified the cause and inspired support, but the real first poster child appeared a quarter century earlier. In 1921, a healthy 39-year-old Franklin Delano Roosevelt, fresh from serving as secretary of the Navy and running unsuccessfully for Vice President, contracted polio. His legs were paralyzed, and only after a good deal of treatment, he could walk with the help of leg braces and someone’s arm support. Still, he ran successfully for President in 1932. Although the media never showed him in the wheelchair where he spent most of his time, Americans knew he had polio. During his 1936 visit to Aberdeen, the papers didn’t mention polio, but a photo caption stated, almost with a wink, “The President is holding the arm of his son.” When he was President, parents of polio victims wrote to thank him for the role model he offered their children. It should be noted that although it was diagnosed as polio, some historians believe he had a different disease.

FDR established what became the National Foundation for Infantile Paralysis, which he later renamed the March of Dimes Foundation, and put his law partner Basil O’Connor in charge. The latter created a strong national organization with local chapters to support treatment, research, and ultimately a vaccine. 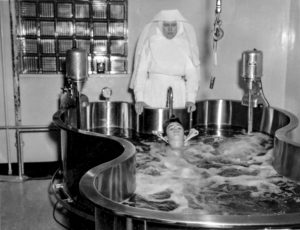 There were polio outbreaks in the United States in the early 20th century, but in the years 1946 through 1953, the nation saw more intense epidemics. In late July 1946, the count of polio patients in Aberdeen had reached 10. While officials tried to instill calm, they stressed preventative measures: personal hygiene, sanitizing garbage containers, and avoiding overexertion among children. Before the end of the month, the bathing beach at Wylie and the wading pools at Melgaard and Lincoln parks were closed indefinitely—despite the assurance of “no epidemic of polio here.” Polio in Aberdeen was on the front page of the paper almost every day in August. South Dakota had 385 cases in 1946, and 37, nearly one in every ten SD cases, were Brown County residents. St. Luke’s treated more than 100 polio patients, many from out of the county.

The same scenario played out in ensuing years. Statewide, both 1948 and 1949 surpassed 1946, with 890 and 406 cases, respectively. From the late 1940s into the 1950s, South Dakota was among the states with the highest per capita incidence of polio. The worst came in 1952, with the highest numbers of cases in both the United States—more than 57,000 with 3,000 deaths—and South Dakota—1,017 cases and 48 deaths. Brown County had 47 cases with one death. St. Luke’s Hospital treated 125 polio patients, half of whom were adults. 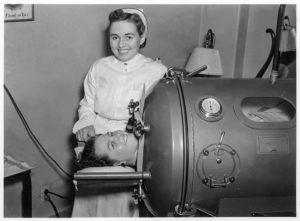 A patient in the iron lung at St. Luke’s Hospital, 1941. This iron lung was purchased for St. Luke’s by the 40-8 veterans service organization in 1939 and is currently in the collection at the Dacotah Prairie Museum.

St. Luke’s treated polio patients for months and sometimes years before they were released to care at home. Already a local partner, in 1948 the National Foundation named St. Luke’s a permanent polio clinic, and the hospital dedicated whole floors to polio care.

The most well-known treatment for polio was the iron lung, essentially a tank in which a patient lies, leaving only the head outside. The iron lung varied the air pressure in the enclosed space to stimulate breathing for those whose illness made it difficult or impossible. In 1939, the 40-8 Veterans group acquired an iron lung for St. Luke’s.

Another popular treatment was the Kenny Method, which used heat packs to increase circulation and massage to relieve pain. At St. Luke’s, Presentation Sister Alacoque Geppert was a primary practitioner of the method. In 1945, she became one of the first—perhaps the first—registered physical therapists in South Dakota. The next year she started 40 years as St. Luke’s physical therapy director. Long remembered by polio patients, in 1969, she was named “First Lady of the Year” for Aberdeen, and in 1992, the South Dakota Physical Therapy Association inducted her into its Hall of Fame. 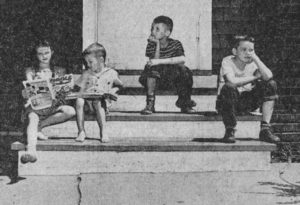 This picture was published in an August 1946 Aberdeen Daily News paper. The caption read, “Not as much fun, but safer–Here is a familiar scene in Aberdeen these days–children not allowed to stray from their neighborhood by the threat of polio infection, gather on front porches to ponder wistfully on entertainment from which they are barred, the movies, junior baseball, a coke at the corner drugstore. Shown left to right are Elizabeth and Tommy Mark, Benji Mandery and Peter Mark, foregathering on the porch of the S.L. Mark home, 1115 Jay St. S.

In the 1940s, polio research, funded primarily by the National Foundation, focused on vaccines derived from either a weakened live polio virus, championed by Albert Sabin, or a killed virus, led by Jonas Salk. In 1954, after about six years of work, Salk’s vaccine was approved for massive public trials. Nearly two million children, including 1,400 in Minnehaha County, received the vaccine. The National Foundation promoted participating in the trials as a patriotic duty. In April 1955, the vaccine was declared effective. Emblematic of the national excitement, the Aberdeen American News dedicated half of its front page to the news. The News interviewed local parents, hearing, “I nearly cried with happiness … This means so much to all of us that have children.” Plans to vaccinate area children began, but that was optimistic.

Several companies produced the vaccine and rushed it out to the country aided by the federal government, which bucked charges of socialized medicine to heed public demand. Then, disaster struck when a handful of people contracted polio from the vaccine. It was discovered that one company had somehow allowed live virus into its process. After the company was removed from the project, vaccinations continued.

Meanwhile, Sabin developed a live virus vaccine. Rebuffed in America with Salk’s vaccine working, he tested it on 100 million people in the Soviet Union. The vaccine—delivered in a sugar cub—was approved for use in 1961. In 1962, Aberdeen vaccinated 16,000 children in its first clinic. America stopped using Salk’s vaccine for now.

Because Sabin’s vaccine contained a live virus, a handful of people contracted polio from it every year, which wasn’t a risk with Salk’s vaccine. In the late 1990s, the CDC reintroduced the Salk vaccine to be paired with Sabin’s, but when polio cases persisted, the Sabin vaccine was dropped.

Paying for It All 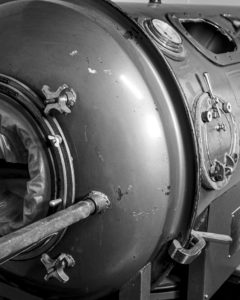 This is presumably the Drinker-Collins Respirator (iron lung) featured in the image on page 49. It is shown here at the Dacotah Prairie Museum where it is a permeant artifact. There is a plaque on the machine that credits its purchase to the 40-8 veteran services organization in 1939 on behalf of St. Luke’s. Photo by Troy McQuillen.

The National Foundation was very successful in raising money to fight polio, nearly matching the combined efforts of most other national health organizations. Aberdeen participated wholeheartedly. After FDR became President, O’Connor promoted local fundraising balls celebrating his birthday. The first year, 1934, saw around 6,000 balls across the country, including in Aberdeen. Labor groups, businesses, and fraternal organizations ran it here, and FDR spoke over radio to balls across the country. Through the 1930s, balls in Aberdeen raised hundreds of dollars each year, not a small feat during the Depression.

After FDR’s death in 1945, the balls ended, and Aberdeen held other fundraising events, including concerts, radio appeals, and auctions. The city participated in the March of Dimes, in which solicitors wore special boxes on their lapels where people deposited their dimes. These post-war fundraisers typically raised over $10,000 a year, up to 70% of which helped pay for treatment of local polio patients.

Vaccines have led to the near worldwide eradication of polio. The last South Dakota case occurred in 1963, and the last endemic U.S. case was in 1979. Two years later, the Western Hemisphere was declared polio free. By 1960, the March of Dimes had shifted its focus to birth defects. Only a handful of countries still routinely see cases—a few dozen a year—and some vaccination vaccination efforts are hampered by cultural suspicions and misinformation, but vaccination efforts continue.

While new polio cases are largely nonexistent, there are an estimated 300,000 polio survivors in America. Some still deal with the effects of the disease, and others will develop post-polio syndrome decades after their initial infection, which can include muscle weakness and fatigue. In South Dakota, late effects of polio contracted earlier in life have caused one to three deaths a year over the past decade.

The polio vaccination campaign remains one of America’s most successful public health initiatives, and the polio vaccine continues to be a required childhood immunization. Aberdeen did its part to develop the herd immunity that has all but eliminated polio, and it’s a discipline that needs to be maintained. //

Thanks to the K.O. Lee Aberdeen Public Library and the Dacotah Prairie Museum for their assistance with this article. Thanks as well to Kathleen Daly of the Presentation Sisters Archives for providing the photos.

The March of Dimes: Making a Difference Today

The March of Dimes Foundation, originally created in response to the polio epidemic, has broadened its focus to the prevention of premature births, birth defects, and infant mortality, as well as the improvement of overall health for both the babies and the mothers.

Since 2001, March of Dimes has partnered with hospitals to provide help and support to NICU babies and their families, reaching over 50,000 families each year. In South Dakota, this initiative includes services such as prenatal/preconception classes, education on birth defects, health care training, and seminars, as well as having a NICU Family Support Specialist available part time at the hospitals in Sioux Falls.

For more information on March of Dimes or if you’d like to donate, visit marchofdimes.org or download the March of Dimes’ Charity Cloud App on your phone. You can also contact the Sioux Falls office by calling 605-334-8203 or emailing [email protected].