Your City
The S.S. Minnow and Flocks of Seagulls
The Things We Leave Behind at the Landfill
By Patrick Gallagher | September/October 2021 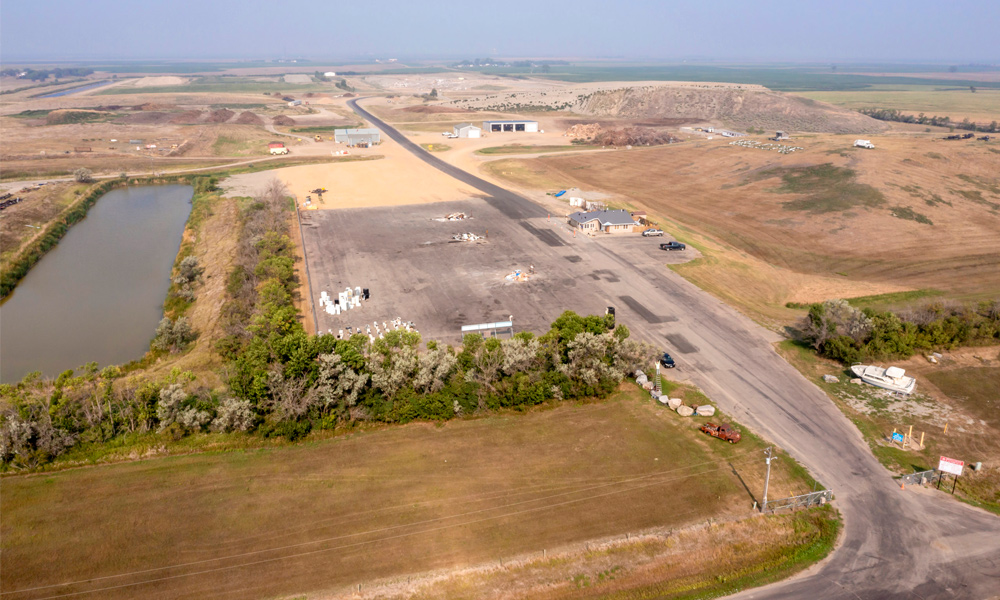 The Brown County Landfill is a seriously large facility. This view, looking west, shows cells on the right that have reached maximum elevation. The new Cell 4 is located off the horizon. When this new cell reaches ground level, the previous three cells will begin to rise to capping level.

Brown County Landfill Manager Mike Scott leans against “Lego” blocks he created from garbage. He likes to utilize interesting things that he believes still have a little life left in them.

“It’s an odd statement to say you keep a clean landfill,” says Mike Scott, manager of the Brown County Landfill, but he thinks he does. Maybe it was meant to be. In 1992, “One day I brought some trash out and found they were looking for a scale operator,” he remembers. “I said, ‘I can do that,’ and here I am almost 30 years later.” He became manager in 1996.

It wasn’t always a clean landfill—and it wasn’t always a landfill. From probably before Aberdeen was incorporated, it had dumps located in various places over time, both outside and inside city limits.

Those dumps had several problems. Newspapers frequently reported fires caused by discarded trash and fueled by winds. Rats infested the dumps, and Aberdeen often resorted to poisoning them. Many dump neighbors complained about litter falling onto their property from trucks hauling to the dump. Another unsurprising problem was eau de dump. A 1962 newspaper story about complaints of bad odors in town included the dump southwest of town as a source and noted, “it would seem the problem could be attacked by an extension of the land-fill program which improves sanitary conditions by burying the debris that is deposited there.”

By the early 1960s, the city was considering a landfill approach but progressed fitfully. Eventually, the state legislature mandated larger counties to have a landfill in operation by mid-1975 and ordered all open dumps closed by mid-1977. In response, the County opened the current landfill west of Aberdeen in 1975.

The Environmental Protection Agency (EPA) started regulating landfills in 1992, when Mike came on the scene. That was when Unit 1 was open for dumping. Today, it’s the hill behind the scale house. Closed and covered in 2009, Unit 1 sinks about 50 feet below ground and rises 50 feet above ground and contains 750,000 tons of trash. Next to it is a larger pile of dirt created from digging Unit 1 and the cells (pits) of Unit 2 west of that hill. The construction of Cell 4 of Unit 2, a $2 million project, was completed in summer 2021.

Generally, the landfill process is relatively simple: trash received on a daily basis is pushed into the cell, compacted as densely as possible, and covered with dirt—hence landfill. Repeat. But, with an average of nearly 200 tons of trash received daily (60,000 tons in a year), you might imagine there’s more to it for Mike and his crew of five equipment operators and a scale operator.

First there’s receiving and sorting trash. Loads brought by the public are dumped on the pad south of the scale house. The landfill accepts almost every kind of trash (except certain hazardous and explosive waste) and most at the same price per pound. Individuals can deposit in one of at least ten separate piles: household trash, metals, tires, appliances, paint, oil, and more—about 10,000 tons of this is recycled each year.

Eventually, the trash pile joins the loads brought directly to the tipping floor above Cell 3 by haulers, which include County trucks bringing loads from the 18 dumpster sites around the county (Mike said only Brown County offers that convenience), commercial haulers, and trucks from communities that pay to use the landfill. Throughout the day, the landfill crew uses a loader to push dumped trash to the edge of the cell.

Then, the 80,000-pound compactor gives the trash its final ride. First, from the rim of the cell, the compactor’s huge blade pushes the piles into the cell, and then it follows the trash into the pit. With its weight and huge steel wheels with large knobby studs, it spreads and compresses the waste to 1,300 to 1,500 pounds per cubic yard. That kind of density contributed to a 75% drop in the number of American landfills by allowing each acre of landfill to take 30% more waste.

At the end of the process, a scraper drives over the day’s compacted trash and spreads about six inches of dirt on it. For good measure, they also hose it down with a fire truck.

The basic process offers many benefits. Rats caught in 1,500 pounds per cubic yard and buried stop being a problem. That’s not the case for all scavengers. As birds swooped over food trash, “The seagulls are here every day. If you close your eyes you think you’re at the ocean!” Mike said.

Covering trash with dirt also smothers most of the stench and reduces the fire hazard. “We haven’t really had fire issues since 2007 after the major flooding in Aberdeen when a lot of loads came in and we didn’t always know what was inside,” Mike explained, like old batteries or other discarded items that sparked fires. The landfill is prepared, however, with surplus fire trucks. Burying trash reduces litter that can blow around, but it still blows. The crew regularly drives a large litter vacuum around the landfill to suck up the mess.

Unlike Unit 1, which had four cells, Unit 2 will ultimately have 12 cells and occupy most of the west side of the landfill property. Each cell will be 400 feet by 900 feet by 45 feet deep with sloping sides. Cells 1 and 2 are filled to ground level and covered. Cell 3 will likely reach ground level soon, and the crew will begin putting trash into Cell 4, which Mike thinks will reach ground level in about five years. Then it will be covered, and just as with Unit 1, the crew will begin depositing trash on top of Cells 1 through 4 until it reaches 50 feet above ground, which may take ten years. Then Cell 5 will open. With seven cells to go after that, the County should have approximately 85 years of dumping life left at the landfill.

A key goal of landfill design is to prevent water contaminated by trash and leachate—landfill lingo for liquids produced by trash—from reaching groundwater. The base of Cell 4 has a two-foot clay liner topped with one foot of sand, which is sloped to direct drainage to a pump that sends it to the landfill’s waste pond. Mike adds that even with the efforts to ensure leachate does not penetrate the base, they regularly test the groundwater for contamination. They also check for methane, another byproduct of trash decomposition and a potent greenhouse gas.

With so much science in landfills, it’s no wonder Mike completed a Management of Landfill Operations program when he became manager. His business degree from Southwest Minnesota State University helps him manage the landfill as an enterprise program within the county. Through fees and recycling, it pays for itself. Mike summarized, “We’re environmentally friendly. We take care of trash responsibly, recycle, and offer a user-friendly facility.”

The Fun Side of Waste

Mike also has fun on the job. It comes as no surprise that people throw away interesting things, and many spark Mike’s creativity. Landfill users are amused by the life-size dioramas he’s created. At the entrance, visitors are greeted by a 25-foot boat christened the “S.S. Minnow” (of Gilligan’s Island fame). Next to the scale house is a lounge scene made of a large feed tank, stools, and an abandoned bar sign—which, maintaining the sitcom theme, says “Cheers”. As he explains, “I like to make things a little unique.” Fortunately, he hasn’t matched the 1914 finding in an Aberdeen dump of a box containing four human heads. They belonged to a doctor who had obtained them for dissection, but someone threw the heads away by mistake.

Mike also makes the landfill an entertaining and educational place to visit. Each year, he gives about 30 tours, mostly to students, who ride on the Brown County Fair’s people movers. “Whether they’re five or 75, most people learn something and have a good time doing it,” he said. “The organizers want to come back every year.” After the educational part, he sometimes takes people up to the top of Unit 1 and lets them roll old tires down the west side at discarded mobile homes. He also hosts sledding parties in the winter for youth groups.

It must be obvious Mike loves his job and that he is invested in it, in both expected and playful ways. Both ways might be summed up in his desire “to find a use for things.” Mike added, “When things come in, we’re always looking to give away or reuse. If not, we’ll bury them!” His operation isn’t just a clean landfill; it’s a pretty unique one too. //

Among the most popular offerings at the landfill are the Fall and Spring Cleanups, when people can drop off waste for free. The Fall 2021 Cleanup is already under way and will end on Sept. 11.