What's New
What’s in Store?
A glance at Malchow Plaza and the businesses that occupy the space.
By Patrick Gallagher | July/August 2021 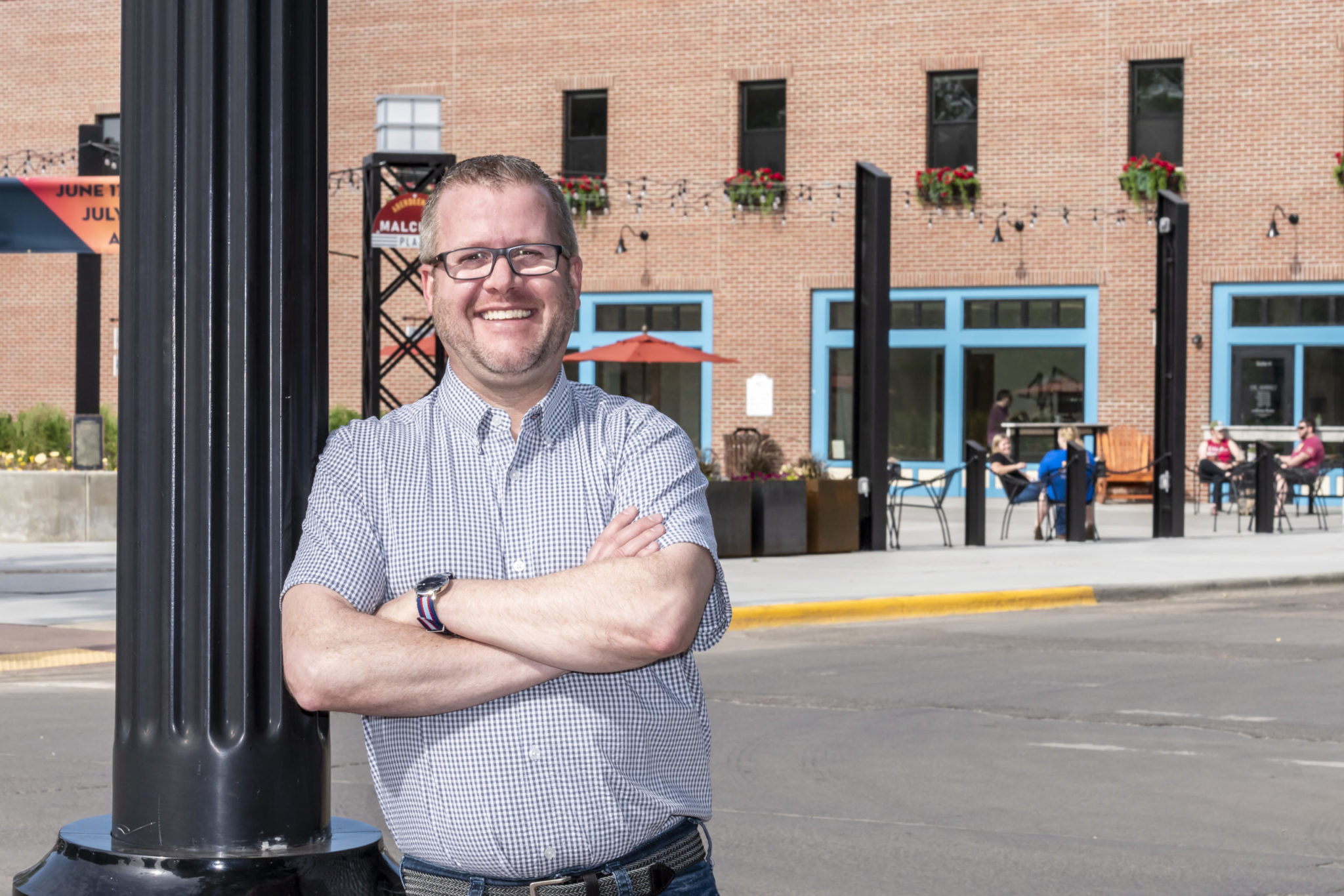 The coolest and hottest place in downtown Aberdeen may be an empty space. The Malchow Plaza at the corner of Fifth and Main Street is not empty, of course. It’s partly a place of business filled daily with dozens of staff, clients and customers, but it’s also, dare we say it, a field of dreams. Okay, it’s a concrete pad. But there’s a lot going on there, with more to come. 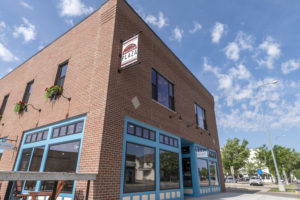 The facade of the new building built alongside the open-air plaza faces 5th Avenue SW.

The Aberdeen Development Corporation (ADC) built and owns the Malchow Plaza, and ADC CEO Michael Bockorny spearheaded the project. Constructed on the former site of Malchow’s furniture store, which burned down in late 2019, the new complex includes the former Anchors of Faith building, which ADC renovated after the fire, a new two-story retail and office building, and a 10,000 square foot open-air plaza.

The ADC moved to Malchow Plaza a few months ago from the SMART Center, which it built in the industrial park east of town in 1997. But the new building was an idea long before it had a name or address. “The location stemmed from a desire to get closer to our key partners: the Aberdeen Area Chamber of Commerce, Aberdeen Area Convention and Visitors Bureau (CVB), Aberdeen Downtown Association, and United Way,” Michael said.

That vision was shared. Gail Ochs, Chamber president, explained, “For the past several years, our organizations have looked at several locations along Sixth Avenue and downtown Aberdeen to build and/or remodel a space that could encompass multiple community organizations.” She added, “Our goal was to have a ‘one-stop shop’ to make it easier for businesses and residents who require the services and resources our organizations provide on behalf of Aberdeen and the region.” CVB executive director Casey Weismantel noted, “The Malchow Plaza gave the perfect opportunity to make this all come together.”

A specific idea guided the planning: they wanted a unique space that did not duplicate or compete. The bottom line is, Michael added, “We want the thing to be used a lot.”

While the building has only been open a few months, getting the organizations in closer proximity is paying off. “We’re seeing benefits of being closer to our partners,” Michael said. “We see each other more often, in the parking lot, on the sidewalk. We’re building new relationships by being on the street.” 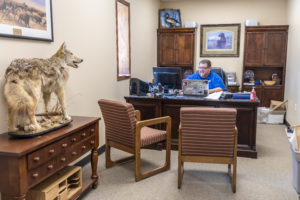 Casey Weismantel, Executive Director of the Convention and Visitors Bureau, enjoys an office with a view of the Plaza.

Of the community organizations, only the CVB is a Malchow Plaza tenant, and it’s been a good fit. Casey said, “The Aberdeen Area CVB has always had visitor information available. This true visitor center was something Aberdeen was needing for quite some time.” The Main Street storefront will also be easy to find.

The Small Business Development Center, which offers business consulting services, followed the ADC downtown from the SMART Center. “I have already had clients referred by our fellow building tenants,” regional director Kelly Weaver said. “As we are getting a coffee or grabbing lunch, we find ourselves connecting with new and existing customers.” SBDC’s fiscal sponsor, GROW South Dakota, a statewide community and economic development nonprofit based in Sisseton, also has lending staff in the new office. 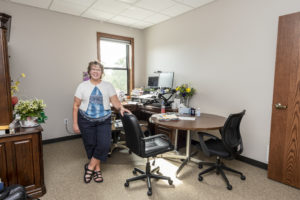 Kelly Weaver of the Small Business Development Center is at home on the second floor of the Plaza building.

The remaining tenants weren’t as predictable. Dakota Broadcasting relocated from a strip mall in northwest Aberdeen because, station manager Devin Reints explained, “We have been looking for something else for a while that had a little better exposure than where we were.” As president of the CVB board, he was involved in the CVB’s move and heard space was available. “The rest is history,” he said.

Dakota Broadcasting’s DJs are visible from the Plaza through studio windows. At Devin’s first radio station, the studio had a window looking out on the street, and “It was always fun to watch people walk by and wave or try to get some interaction with the DJs. It makes them feel like they are part of the show.”

The final occupant, Market on the Plaza, a combination retail shop/coffee shop/tap room, owns its space and presented an unexpected opportunity. Michael said, “I hadn’t been thinking of retail, but it made sense.” 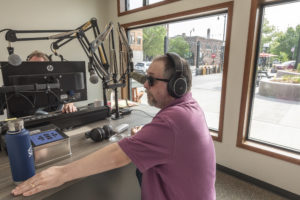 Radio personality, Curt Campbell of Dakota Broadcasting DJs from their studio “on the Plaza.”

He wasn’t the only one. Co-owner Carly Pochop wasn’t planning on this business before the Plaza came along either, but the building helped inspire the idea. She had learned from her Colorful Creations customers, as well as her brother visiting from out of state, that people were looking for fashion forward, regionally inspired products— “local love things,” she called them—that did not look like it was from the Black Hills.

Carly added, “I heard about the Plaza and thought it’d be a shame if it was only offices,” so she enlisted her partner Brodie Mueller, and together they created the Market on the Plaza to meet a need. Spanning two floors, the Market offers coffee, food, and retail items on the main floor and beer, wine, and seating upstairs. The food and beverages can also be enjoyed on the Plaza.

The inviting outdoor plaza has drawn the most attention. A mural, supported by the John S. and James L. Knight Foundation’s Aberdeen Fund and the Aberdeen Area Community Foundation, graces the north wall of the CVB offices. Produced by local artists Nick and Nicole Fischer, the mural celebrates Aberdeen. 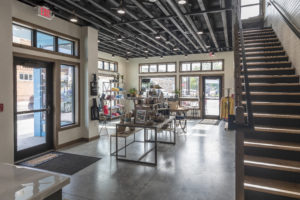 The Market on the Plaza offers food, beverages, a conference space, and unique, locally-made and inspired items.

Like any well-appointed table, the Plaza has a stunning centerpiece, a large planter area with a wall tall enough to comfortably seat 100 people. In May, Carly added a poignant new feature to the planter—600 yellow clay roses she and other Aberdonians created to honor the memory of loved ones.

Besides the Plaza’s casual use, the ADC is working with the Downtown Association and the Market to run events. Here, the Plaza hearkens back to a much earlier occupant of the corner. Built in 1893, the Grain Palace was the original Aberdeen event center where Presidents spoke, but it burned down in 1902.

Shelley Westra-Heier, ADA executive director, said, “Having the Plaza allows for a specific spot for downtown activities to take place. We have studied the success of a downtown plaza or square in other cities for a few years now. We know a space like that on its own attracts people, but it also gives the Downtown Association a programmable space for events to take place.” The Farmers Market moved to the Plaza in May, and in addition to other annual events, some ideas include a Pheasant Fest tied to the CVB’s Rooster Rush and Christmas on the Plaza.

Now that the construction is finished, Michael mused, “It will be interesting to go through the summer to learn what works and to see what we can enhance. There are lots of opportunities and a lot haven’t been identified yet.” That’s not just the community partners, he added, “That’s for the whole community: how do we identify and execute on opportunities to grow our community?”

When it comes to Malchow Plaza, he repeated his mantra, “Just use it! Using it is the whole point!” //