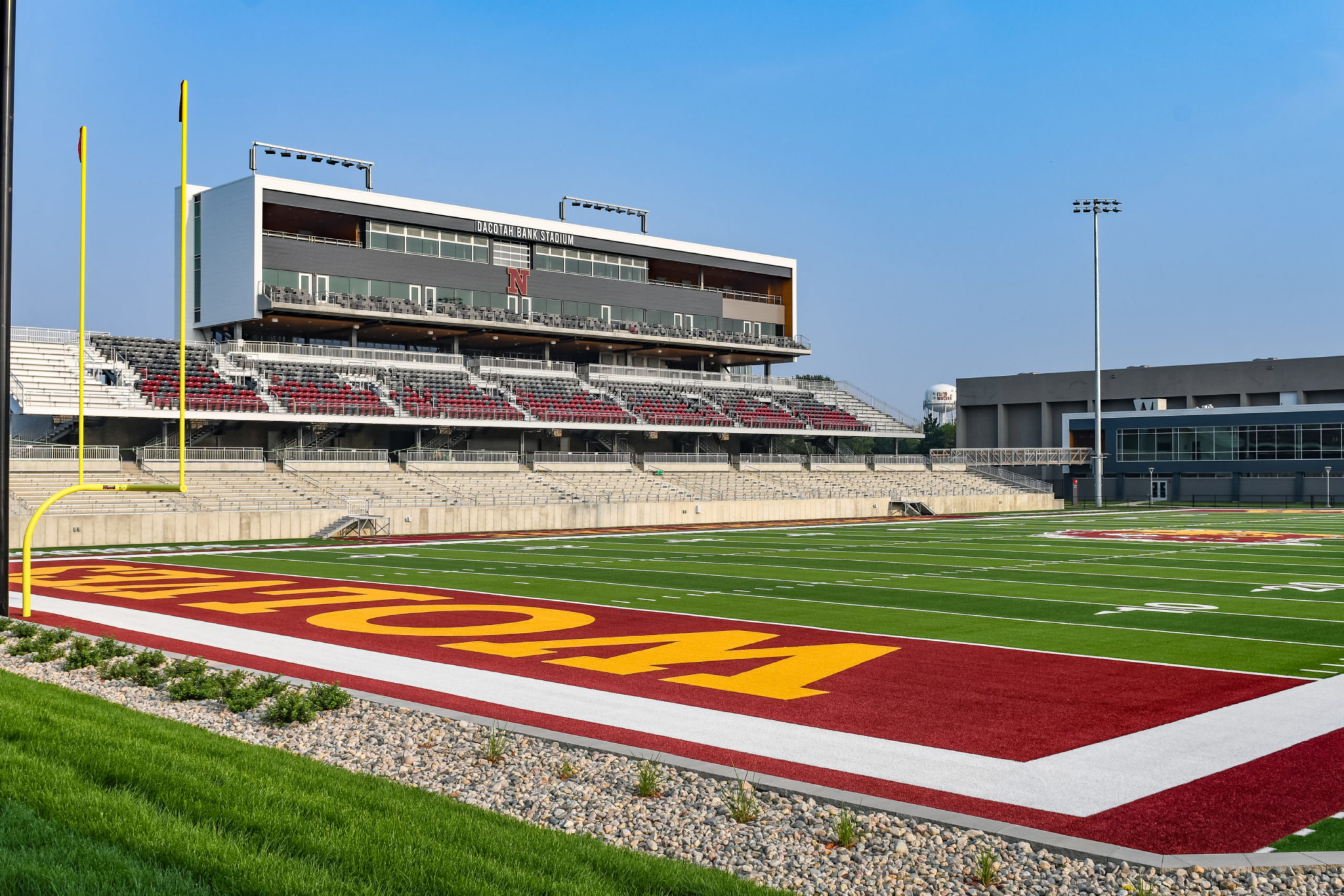 The new stadium’s inaugural game is Sept. 11, and people are expecting it to be packed. Photo by Troy McQuillen

The long-awaited Dacotah Bank Stadium will host its inaugural game for the Northern Wolves on Sept. 11. The football home opener will be against Southwest Minnesota State University, and you can expect to see a huge crowd.

A year and a half after breaking ground on the former site of the School for the Blind, the stadium is ready for use and packs all the amenities sports fans and college students could want. The multi-purpose facility features premium suites and party decks, club and loge seating, a champions club and state-of-the-art locker room, priority parking and tailgating, and so much more.

The $33 million football stadium is part of the Regional Sports Complex, which includes the Koehler Hall of Fame Softball Field and the 16,700 square-foot addition to the Barnett Center on Northern’s campus.

More Than Just a Stadium

NSU did a feasibility study when deciding how best to utilize the 39,200 square-foot stadium. The result showed that the demand is for more social congregating areas. Dacotah Bank Stadium can seat about 4,000 to 4,500 people, but between 8,000 to 10,000 will be able to watch a football game when you include things like standing room and the berm grass seating area to the south.

There’s also plenty of standing room for the softball field, which has between 300 to 400 seats in its 495 square-foot structure, and it will be surrounded by low fencing so thousands of people can have a great view of the game.

“We want people to make this a social atmosphere and environment where they get to enjoy the game, but it’s more than the game—it’s all the people involved,” NSU Foundation President Zach Flakus said. The Foundation is the primary fundraising arm for the university, providing scholarships, operating support, and capital projects such as the Educational Impact Campaign (EIC).

The EIC, which funded the sports complex, the new School for the Blind, and the Athletic and Recreation Fields, covered the initial building costs, but NSU will have to raise operating funds each year for the stadium’s maintenance and repair. A projected $400,000 each year will come through things like concessions, the Wolves Club, sponsorships, and premium parking and tailgating spots. Tailgating will be in the new parking lot to the west of the stadium.

Between the new parking lot, the Barnett Center lot, and other lots across campus, there is plenty of room for fans to park on game days. Eventually there will be a grass area southwest of the stadium for additional parking. It won’t be available this fall because the grass seed won’t be down, but once it’s ready, it will also be used for things like bouncy castles, bean bag toss games, and other family-oriented activities to make things fun for everyone.

“We have not built a Division II stadium,” Justin Fraase, Vice President of Enrollment, Communications and Marketing, said. “It is something that is truly one of the best facilities in the country, particularly in the Midwest, and it’s an experience that you’re going to want to be part of.”

Football and softball coaches, especially, have been seeing a lot more interest from students all across the country. Head football coach Mike Schmidt said the stadium has changed the entire game of recruiting.

The pandemic really sparked the push for virtual recruiting, but NSU played to the strength of selling the stadium, and it worked out well. Just this year, the football team signed recruits from 18 different states, compared to signing recruits from just five Midwest states last year.

Jake Oliphant, who is from Nevada and in his fourth year at Northern, said the stadium would have been a huge deciding factor back when he was choosing where to go to college. “You don’t see a stadium like this,” he said. Jake plays left guard for the football team.

Fall camp was Aug. 9, the day after most of the new recruits moved in. Since then, Coach Schmidt’s focus has been getting the team ready to go big on Sept. 11.

The team thinks the new stadium will help them do well this season because it boosts morale and gives the players something to get excited about and increases a level of expectation.

Jake agreed, saying, “Even this spring when we played, it was just different. With the guys, it seems like they have a goal in mind.”

Jake said he’s most excited to experience running out of the locker room with everyone for the first home game. Dakota is also looking forward to the new season, especially since last fall’s season was cancelled because of COVID.

“That was kind of hard,” he said. “I’m just looking forward to playing again with all the guys. … Just to go back out there again and show all the work we’ve been putting in is exciting.”

Investing in the Community

The stadium is something for everyone to enjoy, not just student-athletes. Students on campus will now be able to have the classic college experience and convenience of walking to the stadium for games without worrying about driving.

“I am so very excited to be able to experience the new stadium this fall. It’s a beautiful facility that is going to allow us students to make some great memories cheering on the wolves,” Bailey Hammrich, a junior elementary education major, said.

Gypsy days, especially, will be a huge fan favorite and a fun community event.

“For me, growing up in Aberdeen, Gypsy Days was always a huge day. … It’s always our most-packed game of the year, and having it in the new stadium? It’s going to be crazy,” 4th-year Collin Stoebner said. Collin is a middle linebacker for the football team.

“I think the new stadium is a great addition to the NSU campus. I am very excited for all that is to come!” Tanner Pietz said. Tanner is a junior vocal music education major from Aberdeen. He has many memories of going to games at Swisher Field but is looking forward to the experience of Dacotah Bank Stadium.

“Leaving Swisher is kind of bittersweet,” Collin said on the topic, “but it’s going to be nice to play on the field that is unique to our college.”

He said friends and family will be “just ecstatic” at the opportunity to experience wolves football in a professional atmosphere. The new stadium buzz is going around the region and among NSU alumni, and Northern is anticipating maxing out on capacity for the first home game.

“It’s going to be eclectic in there!” Collin said.

“It offers so many more options than anybody at Northern has had in a long time,” Zach Flakus said.

There is no doubt that the stadium is a sign of a good investment in the community. Zach mentioned that many employers in the area will drive potential hirees past Northern’s campus to show them what activities Aberdeen and the university have to offer the community.

Looking to the Future

Northern has seen a 15% increase in undergrad applications during this past year, and they’ve been able to maintain the number of campus visits even during the pandemic, which is a good indicator that Northern is growing. Additionally, about two-thirds of NSU grads stay in South Dakota, which helps the state as a whole.

Everything Northern has done since the Master Plan was unveiled in 2017 has been for the students. Northern wanted to make it clear that students were number one, so there were other priorities that needed to be taken care of before the football stadium was built.

Those other academic projects included renovating and building new residence halls, renovating the Johnson Fine Arts Center, and building the science center. Raising the funds, getting the approval, and making all these changes in a short amount of time is “truly incredible.”

“We’ve revitilited campus in five to ten years, and we’ve done that without raising tuition or putting it on the backs of students,” Justin Fraase said.

With this big project finished, the NSU Foundation can go back to focusing on the students and providing scholarships, which helps with enrollment as well.

“We’ve been able to do all of these things because of the generosity of our community and our donors, so we owe it to everyone in this community to give it our all when it comes to bringing students here to campus,” Justin said.

Down the line, Northern looks to build the Glenna Fouberg Student Success Center and expand the School of Business, both things that show Northern is continuing to make students a priority.

And as Zach put it, “This just really sets up Northern for a long time.” //